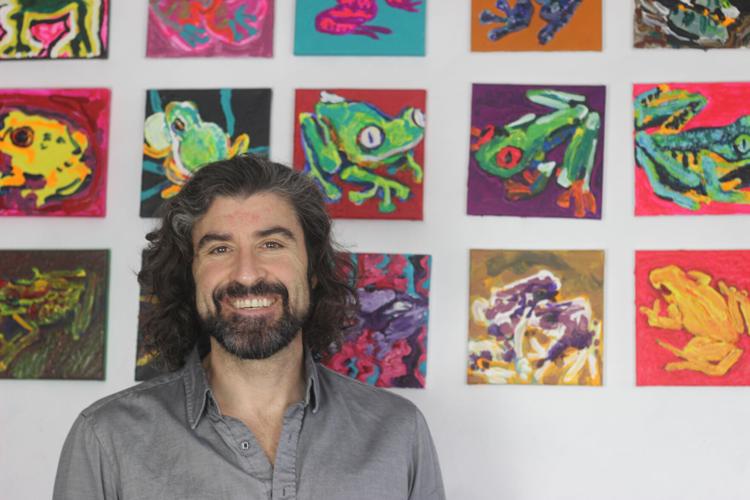 Bradley Scott Davis has painted a frog a day since last fall. He’s so far painted over 200 frogs, many of which are displayed in his Edina studio. The frogs are depicted with various colors and angles. (Sun Current staff photo by Caitlin Anderson) 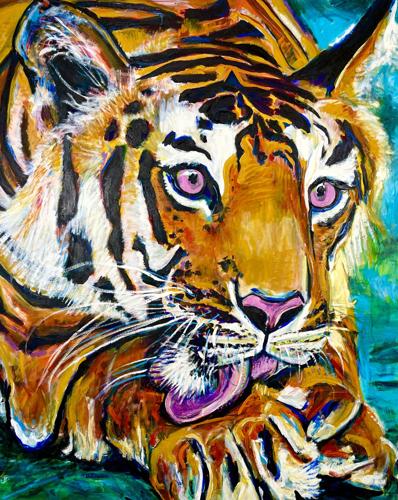 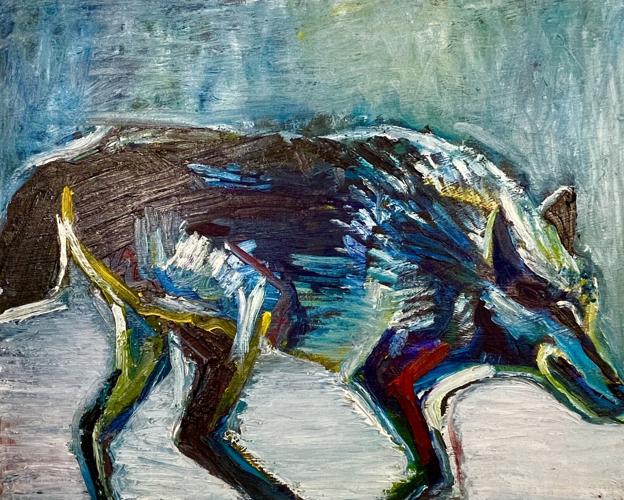 A wolf represents the “wild” in Minnesota to Bradley Scott Davis. His painting is intended to reflect the fear of wolves often displayed by humans is a manufactured emotion. (Photo courtesy Jeff Bukowski) 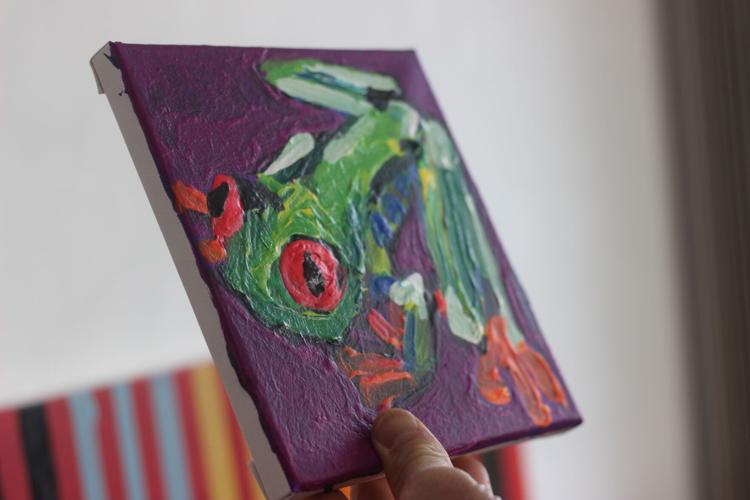 Bradley Scott Davis holds up his twentieth daily frog, a red-eyed leaf frog. To Davis, the frog is a “symbol of rainforest life,” and is intended to perceived as looking out at an observer, questioning what’s going on, particularly, when it faces rainforest destruction. (Sun Current staff photo by Caitlin Anderson) 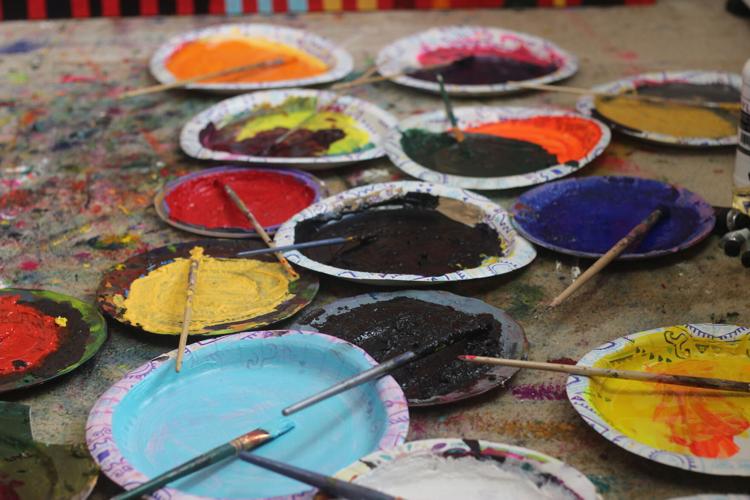 Oil paints, made in Italy, are strewn across the floor of Bradley Scott Davis’ Edina studio. (Sun Current staff photo by Caitlin Anderson)

Bradley Scott Davis, an Edina-based artist, has taken on quite a feat: Every day since this past fall, the artist has painted a picture of a frog – altogether featuring a variety of species in different poses, angles and colors.

Last month marked the half-year point for Davis’ daily frogs, many of which are prominently displayed in his Edina studio. Frogs are more than just a longtime interest for Davis, but a symbol of the importance of nature conservation as the species is often considered an indicator of an ecosystem’s health.

Davis, a Harvard University graduate who has been a painter for 25 years, largely creates paintings of figures in wildlife, including big cats and birds. His stint creating daily frogs started as a pandemic pastime and hasn’t stopped yet.

So far, Davis has painted over 200 frogs, crossing that threshold at the beginning of May. “It’s a real joy,” he said.

Davis’ career in painting began after he graduated from Harvard in 1997. The St. Louis, Missouri native had originally gone to the school to be a doctor, but ended up changing course to pursue poetry. While at Harvard, Davis studied under E.O. Wilson, the late American biologist, who provided inspiration for his future art work on nature, wildlife, and particularly, frogs.

After graduating, Davis moved to Manhattan, where he eventually shifted his focus from poetry to painting, influenced by some friends who already were in the field.

“I love the opportunities to express different kinds of mysterious and otherwise unsayable aspects of being a human and being alive,” Davis said. “It’s such a unique feeling or aspect that it has to be said in poetry or painting.”

Davis eventually left New York for New Zealand, where he spent a year being close to nature, such as taking scenic walks and camping at various spots around the country.

It’s also where Davis said he became inspired to get closer to wildlife, which applies even now living in Minnesota.

“What connects me to nature is to see the life in nature,” he explained. “When I see … a red squirrel doing what it loves to do and to be able to observe it happily living in its environment, I feel a sense of oneness with everything.”

After New Zealand, Davis went to Bristol, England, where he participated in art shows, displaying his works. At this time, Davis’ art transitioned from exclusively focusing on wildlife to more colorful, abstract work, he said.

He decided to apply to art school, eventually getting into one in Bath, England – a city that he said was “an aesthetically gorgeous setting to study art.” After completing school, Davis ended up getting a studio in the city as part of a group of studios, now called the Bath Artists’ Studios, he said.

He started showing his work and getting more recognition while at the same time, connecting with other painters and learning from them, he said.

He later returned to the U.S., to live in Boulder, Colorado, for a period of time, and eventually, to reside in the Northwoods of Wisconsin, which enhanced Davis’ passion for woodland animals. He painted from a studio located on Lone Stone Lake near Seven Mile Creek, which had “basically every imaginable Wisconsin animal living in the vicinity,” Davis recalled.

Then, he moved to the Twin Cities, where he has remained for nearly a decade. He lives with his 13-year-old son, Darwin, and paints out of two studios, one in Edina and another in Northeast Minneapolis. The Minneapolis location is in the California Building with 80 other artists. “It’s just such a good vibe up there,” he said.

In his art, Davis likes to “celebrate” the mechanisms by which beings in nature live by “pointing to the dignity that exists in harmonious ecosystems that we can participate in,” he said. “We can share in the glory of that majesty, that mysterious sort of connection … that happens.”

He added that “by observing it, by getting quiet and getting present or putting ourselves intentionally out into natural places, ... we can absorb and be the beneficiaries of that spiritual richness.”

His art is also intended to inspire observers to take action to protect it, he said.

Davis recalled his professor, Wilson, mentioning that “frogs are the canaries in the coal mine of nature,” meaning that measuring the health of frogs in an ecosystem can provide an indication to the wellness of an entire environment.

Davis painted his first-ever frog while in Manhattan, where he and his roommate had set up an aquarium that included frogs. He received positive feedback on the artwork, and later, in England, hosted a frog-themed art show, featuring over 60 of his frog paintings, he said.

Often indoors during the pandemic, Davis started painting a frog on a small canvas each day to “connect with my audience,” he said. The sheer repetition of it, he explained, could grab people’s attention.

And the goal of painting a frog each day provides a push to get into his studio and learn more techniques, he said.

“I’m learning probably 10 times as much because the lessons are fresh, they’re right in front of my face,” he said.

Putting all of his frog paintings together provides a “diverse, interesting progression,” Davis said, “ … and a window into my own creativity.”

He added, “You can trace my train of thought.”

Davis intends to participate in a couple of art shows, which may include his frogs, this summer at the California Building in Minneapolis.

He said his art is intended to bring awareness to the conservation of nature, and the beauty and individuality of animals, like frogs. “The environmental conversation, it is a very relevant, important discussion,” he said.

Copyright ©2022 at Sun Newspapers/ APG Media of East Central Minnesota. Digital dissemination of this content without prior written consent is a violation of federal law and may be subject to legal action.