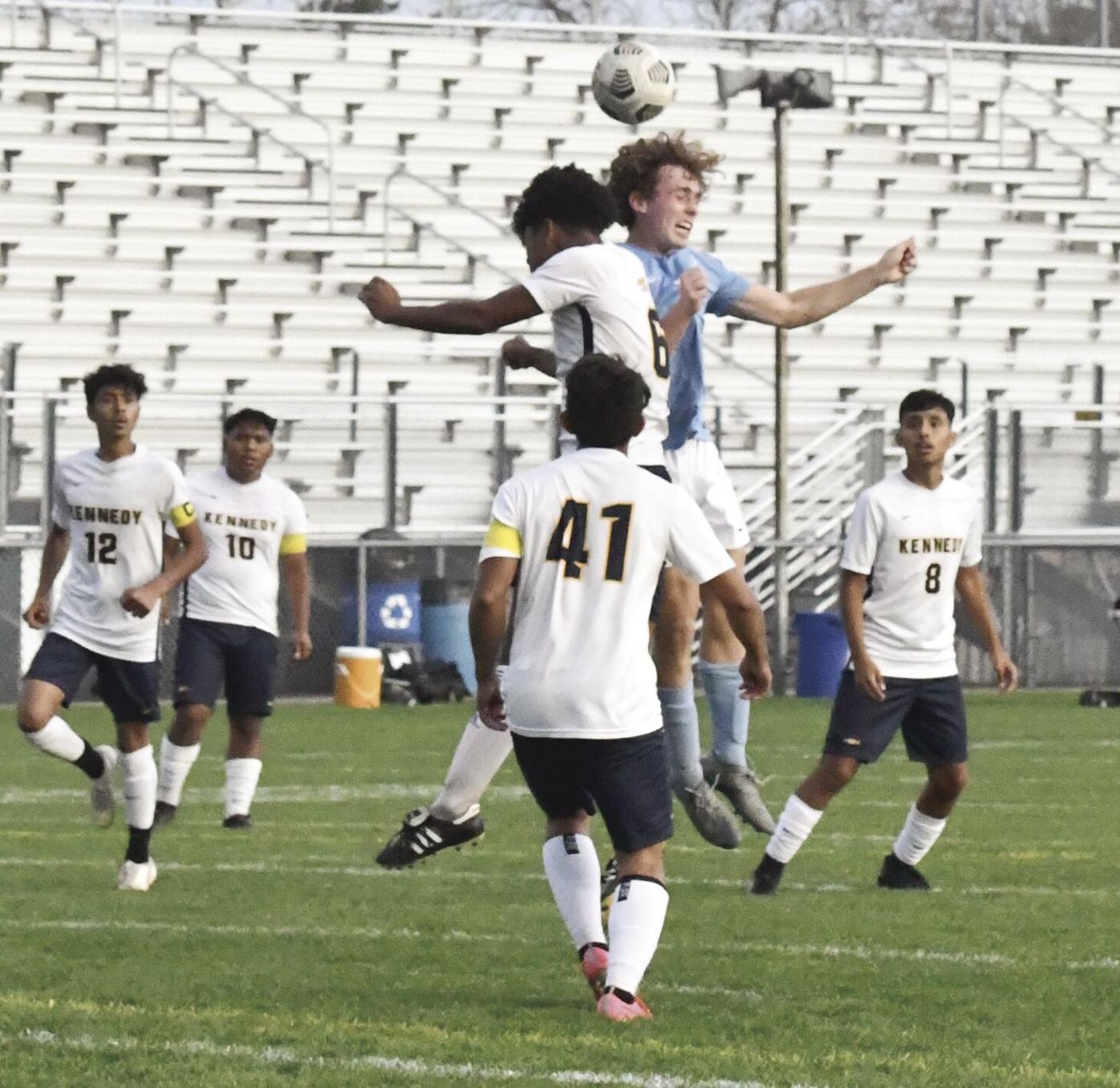 Jefferson’s Aidan Atkins, right, scores on a header in the 51st minute and adds a second goal 10 seconds later. 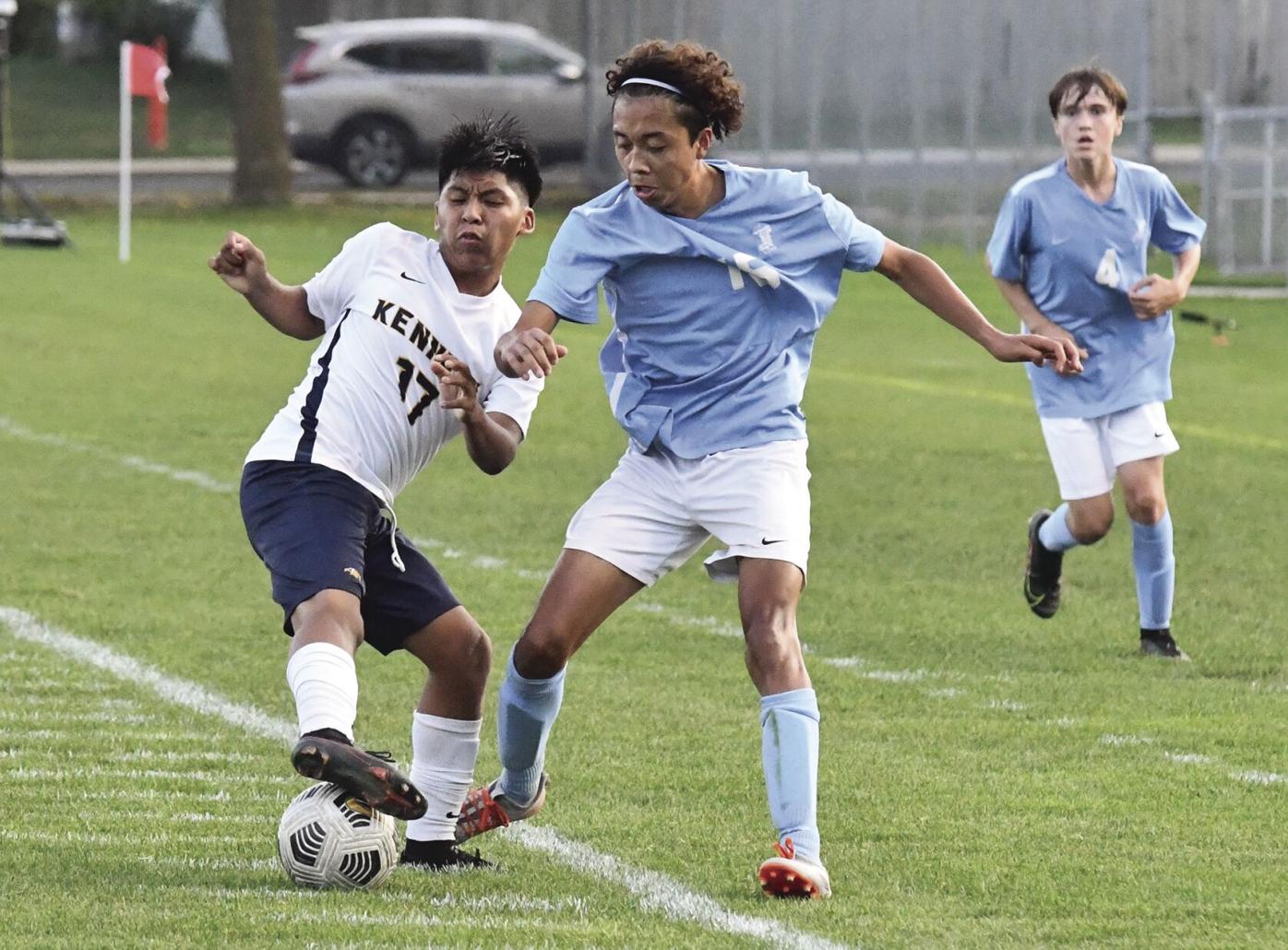 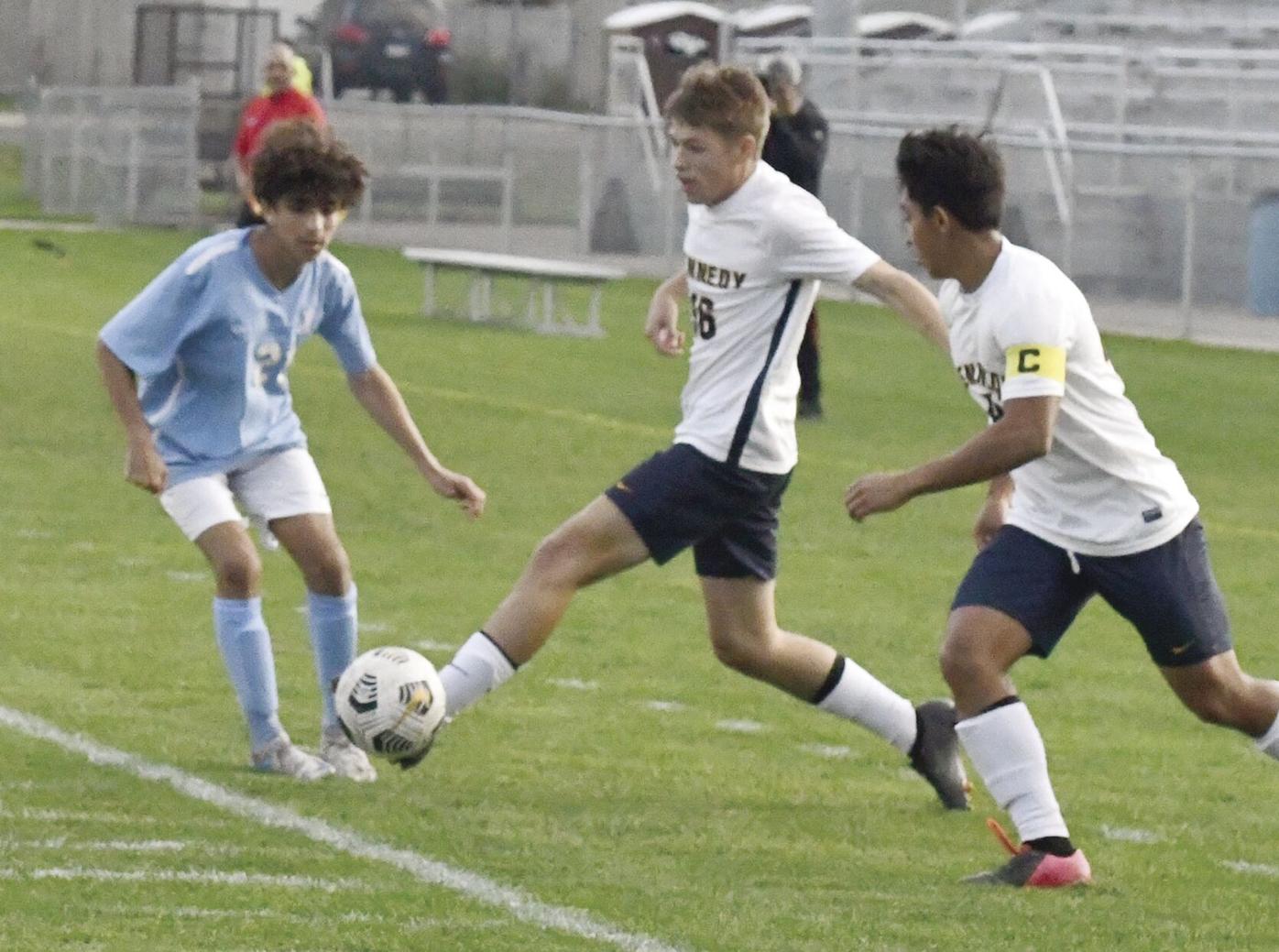 Kennedy junior Zachary Bizal, middle, knocks the ball to a teammate during the first half of the Oct. 7 game against Jefferson. 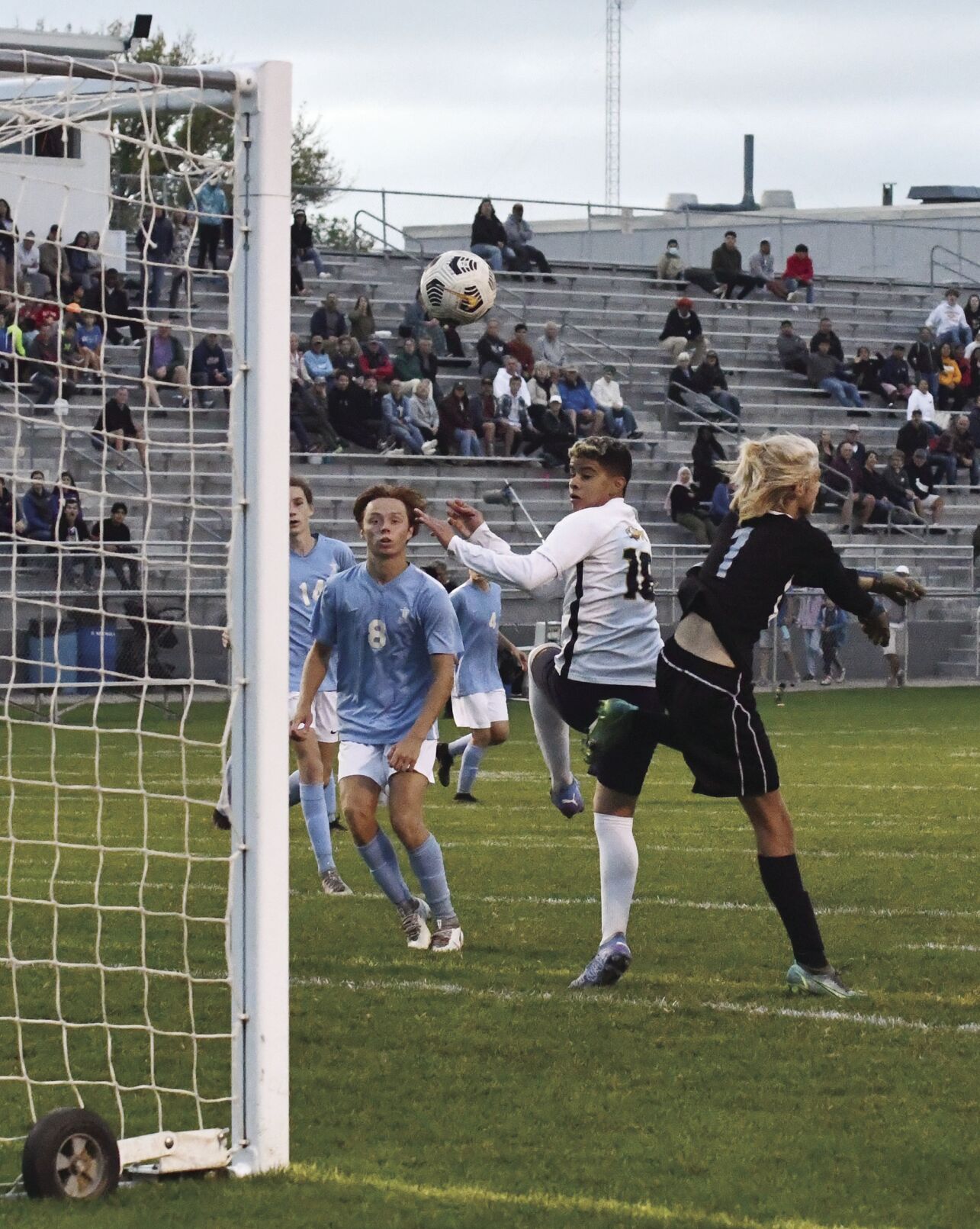 Jefferson's Santiago Singer Eman, middle, keeps an eye on the ball just after he headed it past the Jefferson goalkeeper in the final minute of the Metro West Conference game at Bloomington Stadium. 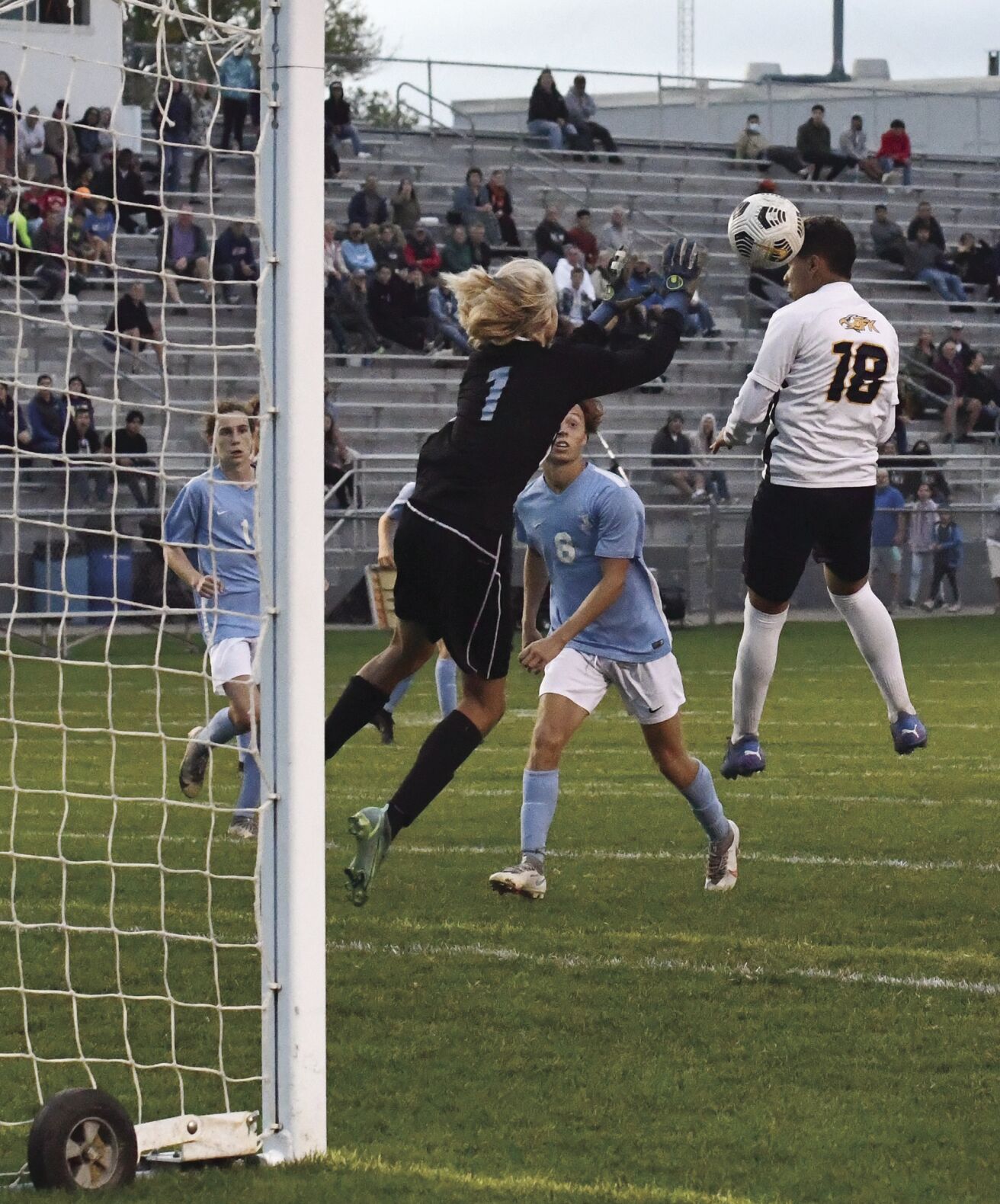 Kennedy junior Santiago Singer Eman reaches for a crossing pass from Diego Perez for the game-winning goal with 41 seconds left in regulation Oct. 7 at Bloomington Stadium.

With the intensity of a section final, Kennedy and Jefferson put on quite a show in the first game of the intra-city soccer doubleheader at Bloomington Stadium Oct. 7.

Kennedy boys eventually won 3-2 with all five goals coming in the second half and four only moments apart in what has to be one of the most dramatic finishes in the series.

Kennedy’s Diego Perez had four goals on the season but scored twice to bring the Eagles back from a 2-0 deficit before setting up the winning goal.

The tying goal came with 76 seconds left in regulation as he flicked the ball inside the far post past Jefferson goalkeeper Bennett Larson. Jossfranc Gadea Solorzano served up the ball on a free kick from near the touchline.

Perez set up the winning goal with 41 seconds on the clock from a similar spot as the tying goal. This time, junior Santiago Singer Eman headed the ball past Larson to send the Eagles into a frenzy to celebrate the goal.

Kennedy coach Dan Bushendorf was part of the celebration near the corner flag and was given a yellow card for unsportsmanlike conduct.

Perez said the team didn’t start the game with the best energy but that changed closer to the 80th minute of the game.

“We all talked about bringing up the energy in the second half and got it going to generate chances and put them away,” Perez said. “Jefferson is a really good team and they gave up us a really good game and give them props for that.”

As for setting up the winning goal, Perez said Eman had many chances but finally connected when it mattered the most.

“Once we got that first one we got some momentum and at the end of the game we were all out of breath out there,” Perez said.

Eman and Diego Fuentes Rodriguez share the scoring lead with seven goals and two assists each.

Eman’s goal didn’t surprise Bushendorf, who said the junior’s shot catches goalies by surprise with his strength and ability to put the ball on target.

The comeback isn’t the first for the Eagles who went toe-to-toe with Burnsville before winning 4-3 back on Sept. 18.

“We were down 1-0, 2-1 and 3-2 and won it,” Bushendorf said about the game on the Kennedy turf field. “Most people will not be in a game quite like that again.”

The Kennedy coach praised his counterpart, Jefferson’s Dan Storlein. “Dan’s so good, he knows how to get the most out of them and is always so dangerous off a free kick or a long throw-in and they are just so good. Both teams battled so hard.”

Jefferson senior captain Aidan Atkins scored eight seconds apart in the 51st minute to give the team on the home scoreboard what appeared to be a comfortable lead, given the way both defenses were playing.

Atkins, a starting guard for the basketball team, rose above a Kennedy defender to drive the ball inside the near post from near the 8-yard penalty spot.

Jefferson’s initial shot was deflected straight up in the air by Samson Gyasi where Atkins took advantage of the chance.

“This year I’ve been able to jump higher than everyone and part of that is from basketball and I’ve had plenty of close [goals] all year,” Atkins said.

On the restart, Atkins intercepted the pass, streaked past the Kennedy players before unleashing a precise shot over the Eagles goalkeeper eighth-grader Brandon Cruz Rojas inside the upper part of the far post.

Atkins said the message from coach Dan Storlein has been consistent from the first day of practice: “Aidan: go far post,” he said. “That was high, far post but still.”

Storlein said they moved Atkins up to a strike role to generate some offense after scoring just once in the previous four games.

“He did a great job to get two in 30 seconds and then [Kennedy] goes back and gets two of their own at the end like that,” Storlein said

The Jaguars coach felt his team played better in the second half but couldn’t show anything for the effort.

“We didn’t finish it out and a good win for them,” Storlein said as Kennedy has won the last four straight meetings going back to 2018.

Atkins said the first half of the game was perhaps their worst half of soccer this fall.

“I say the first five minutes can turn around the whole game so I knew if we came out good in the first five we would probably win the game and we did for the first 35 minutes.”

Ten minutes after Atkins surged Jefferson ahead, Perez calmly scored his first goal of the game. He started the counter-attack with a turnover near midfield as sophomore Angel Fuentes Rodriguez slipped Perez the ball

inside the penalty area to set up the goal from 15 yards out on a shot inside the left post.

“Loved it,” Bushendorf said. “Angel worked so hard after barely getting minutes as a freshman and halfway through the season he took over as our second forward. He doesn’t score a lot but he possesses, holds it and steals balls.”

Kennedy had a couple of corner kick chances in the final 10 minutes. The ball was headed into the side netting on one chance and the Jaguars goalkeeper managed to keep the ball out of the on another chance by sitting on it after Diego Fuentes Rodriguez’s one-timer shot from the edge of the 6-yard box. Alex Olvera found Fuentes Rodriguez behind the Jaguars’ defense for the quality scoring chance.