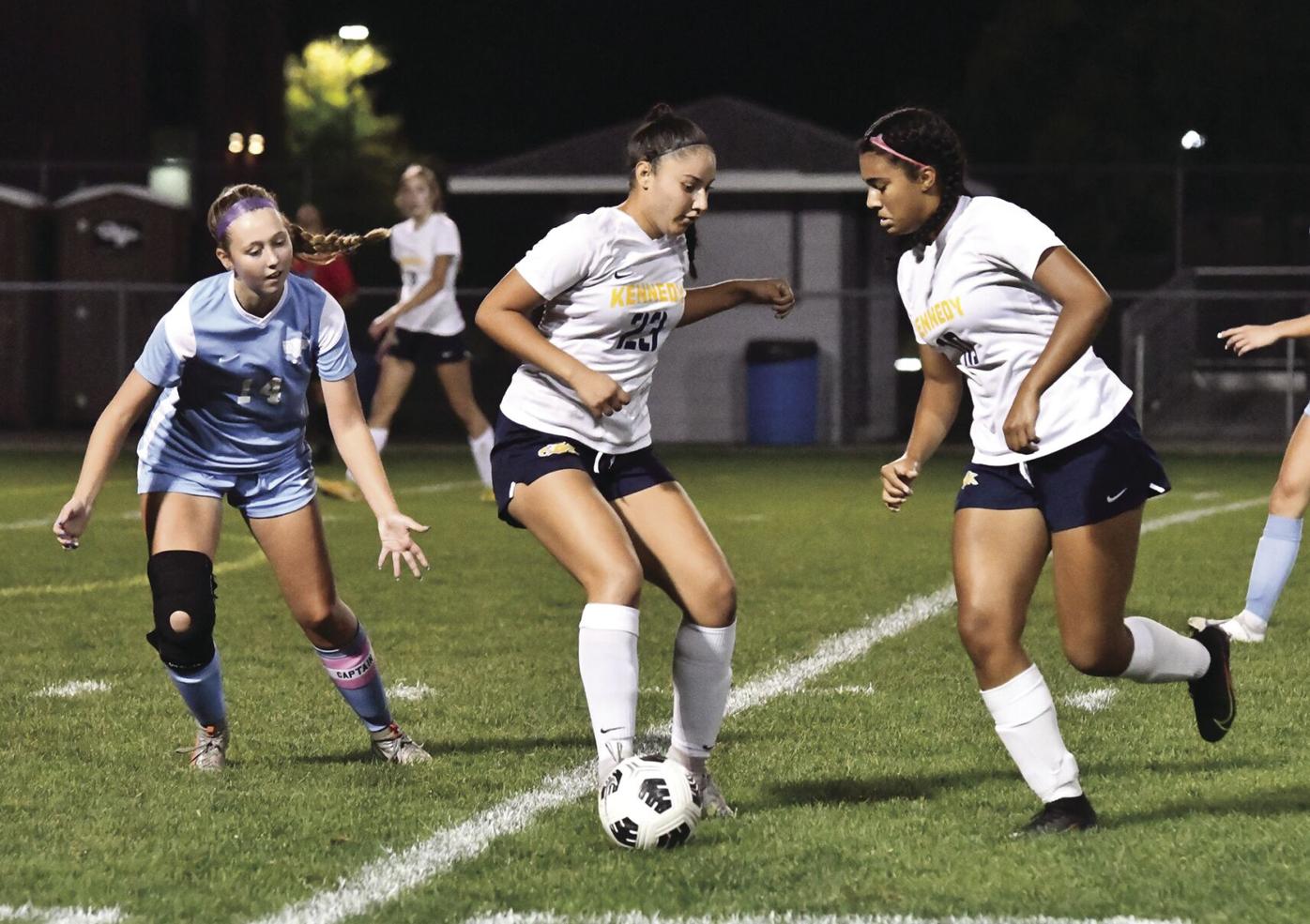 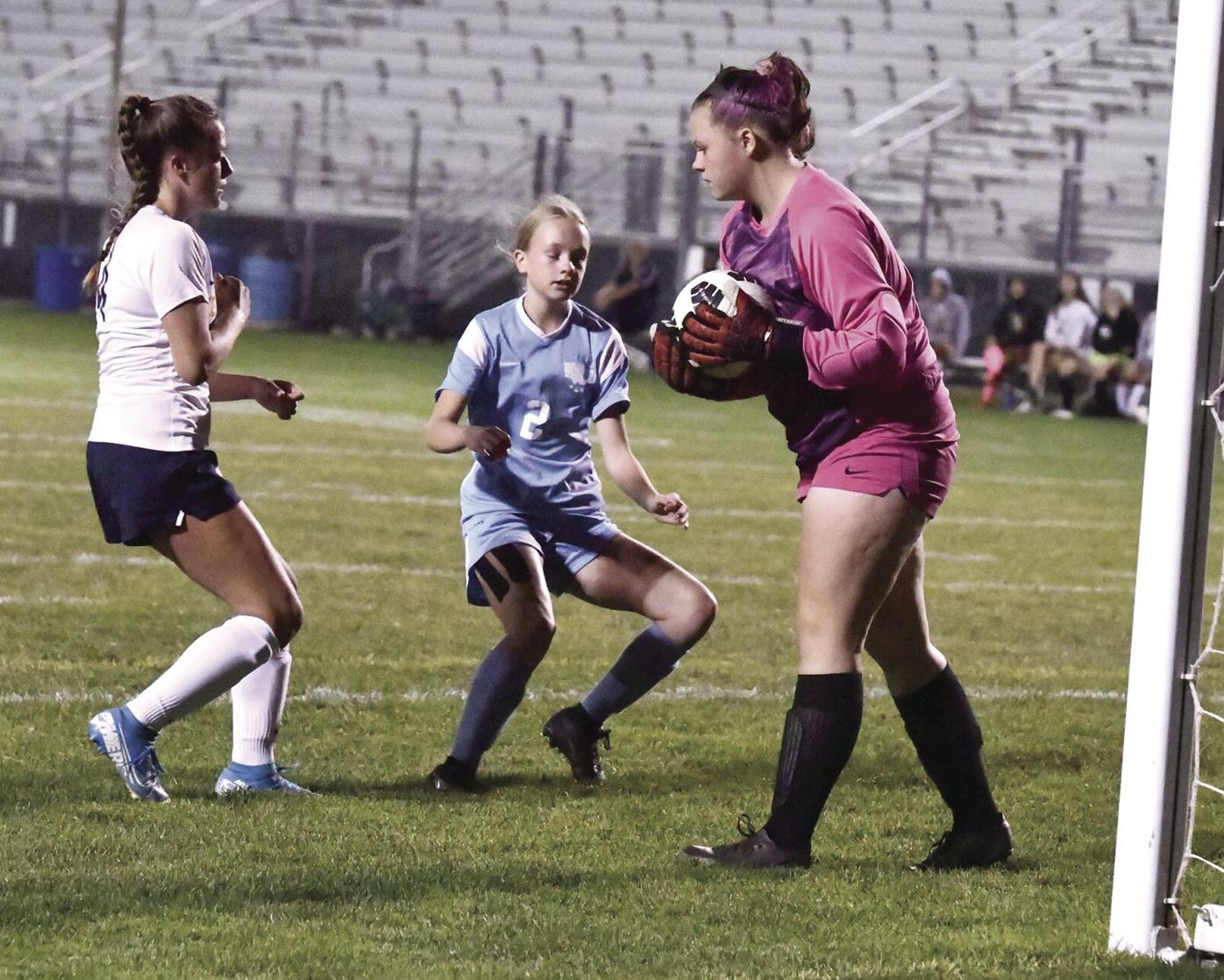 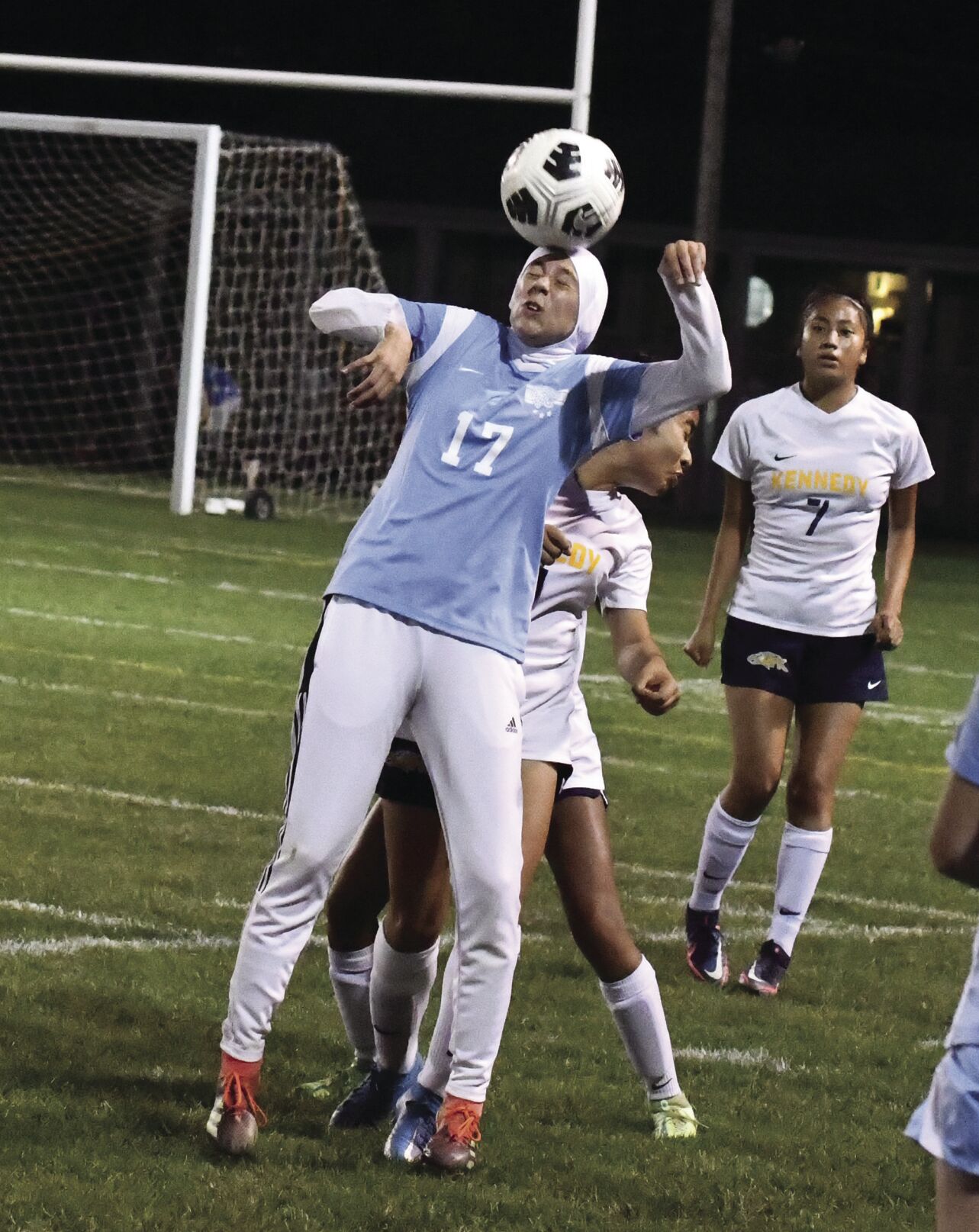 Jefferson junior Ayah Makled gets a head on the ball during the Oct. 7 contest against Kennedy. She set up the game’s first goal scored by Abby Longhenry just 12 seconds into the game. 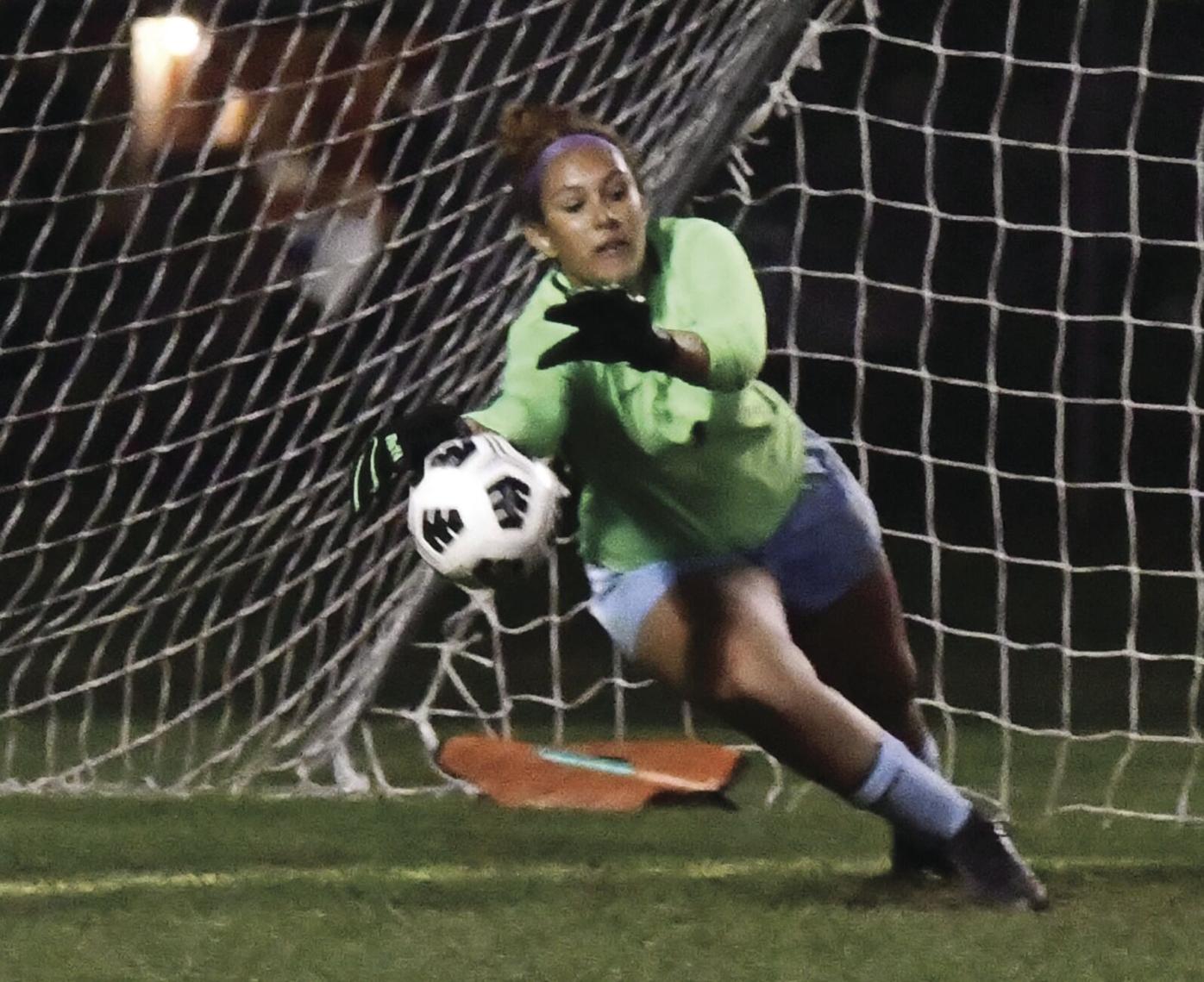 Jefferson junior goalkeeper Rhianna Anya blocks a penalty kick during the second half of the Oct. 7 game against Kennedy. 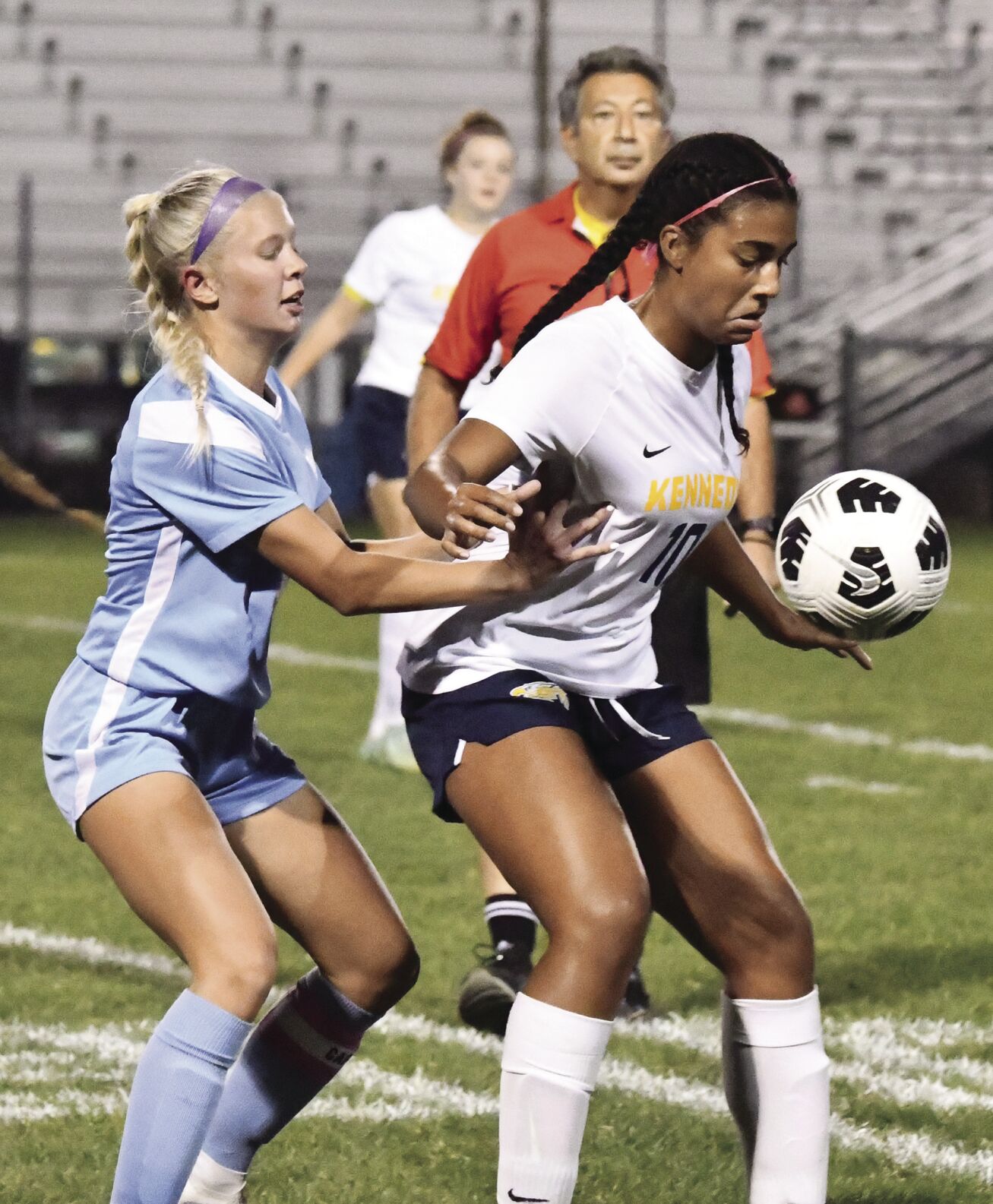 Kennedy junior Ruthie Gyasi, right, shields the ball during the first half against Jefferson Oct. 7 at Bloomington Stadium.

Kennedy girls soccer can add another highlight to a 10-win regular season with a 2-1 triumph over crosstown rival Jefferson (4-9-2) Thursday night at Bloomington Stadium.

The victory was the first for coach Mario Lone in his decade guiding the Eagles (10-4) over Jefferson.

“For me, it was great to those monkeys off our back,” Lone said. “And for us, it was more of a mental game because we didn’t play our best – giving up that early goal really flustered us. It was a shock.”

Twelve seconds is all it took for Ayah Makled to intercept a pass and feed Jefferson teammate Abby Longhenry to give the Jaguars the early lead.

The game was the second half of a doubleheader – the Kennedy boys won a thriller 3-2, scoring the winning goal with 41 seconds left on the clock.

The action was just plentiful in the girls match, as both goalkeepers were on top of their games.

Rhianna Anya, the Jefferson junior keeper, denied a penalty shot as Jefferson senior Ruby Studer fouled Cam Renneke inside the penalty area in the opening half.

Kennedy’s Lizbeth Dominguez Castillo put a solid shot on the net for the penalty kick but Anya dove to her right to deny the goal and pounced on the rebound to preserve the 1-0 lead.

Five minutes later Kennedy junior Maisie Pederson tied it up sending a floating shot over the goalkeeper inside the top half of the far post. It was her first goal of the season but couldn’t come at a better time going into halftime, much to the surprise of teammate Renneke who was in position for the rebound among Jefferson players near the goal.

The extra competitive action continued in the second half.

Junior captain Izzy Lone nearly put Kennedy into the lead with a well-placed free-kick straight out from about 35 yards. Her shot kept rising as Anya had to tip it over the crossbar 66th minute for an Eagle corner kick. Anya collected the ball cleanly off the corner kick.

Jefferson countered with forward Grace Schuck keeping the pressure on the Kennedy defense all game, as did Makled in the midfield and Haley Zosel on defense but joined the attack.

With the game still tied, Longhenry had a step on Pederson and only Kennedy keeper, Brianna Dotter, to beat. Longhenry’s shot was stopped by Dotter, who jump-started the Eagles rush up the field.

Dayana Languren Gutierrez tapped the ball to Lone who sprung Makenzie Kane free through midfield. Kane took a couple of touches and found senior captain Amaya Fierro for the winning goal in the 59th minute.

Fierro tipped her shot past Anya for her 11th goal of the season on a ball that appeared to be for Suzzie Munson at first.

“Amaya made a 30-yard sprint, she saw the opening and went for it,” Lone said.

The Eagles coach noted the play of Dotter in the net as another bright spot all season.

“She’s really stepped up into her role and understands her position after working with [assistant coach Armin Ahmed],” Lone said.

Emotions on the Kennedy side were high after conceding the early goal. Lone said they talked about how to stay together and positive. “We talked about no matter what happens on the field don’t take it personally,” Lone said. “We managed to keep ourselves composed and dug really hard and got the win.”

The game was the eighth in 12 days for Kennedy as the focus turns to Section 3AA play.

The Eagles wrapped up fourth place in the tough Metro West Conference finishing behind champion Benilde-St. Margaret’s (9-0, 14-0 overall) followed by newcomers Waconia (7-3, 11-3) and Orono (6-2, 9-5). Jefferson finishes seventh in the conference at 3-5 and 4-9 overall.

Coaches from each section vote to determine seeding for sections but take into account what is known as a QRF rating. Kennedy’s QRF rating is 64.5, which is 13th best in Class AA and second in Section 3AA, trailing only Holy Angels (15-0-1). The Stars’ rating is 84.1, third-best in Class AA in the state, behind BSM and St. Francis.

Jefferson is part of Section 3AAA and is within a fraction of a point for fourth place with Park of Cottage Grove and Burnsville. Rosemount, Eagan, and Eastview own the top three ratings in the eight-team section.