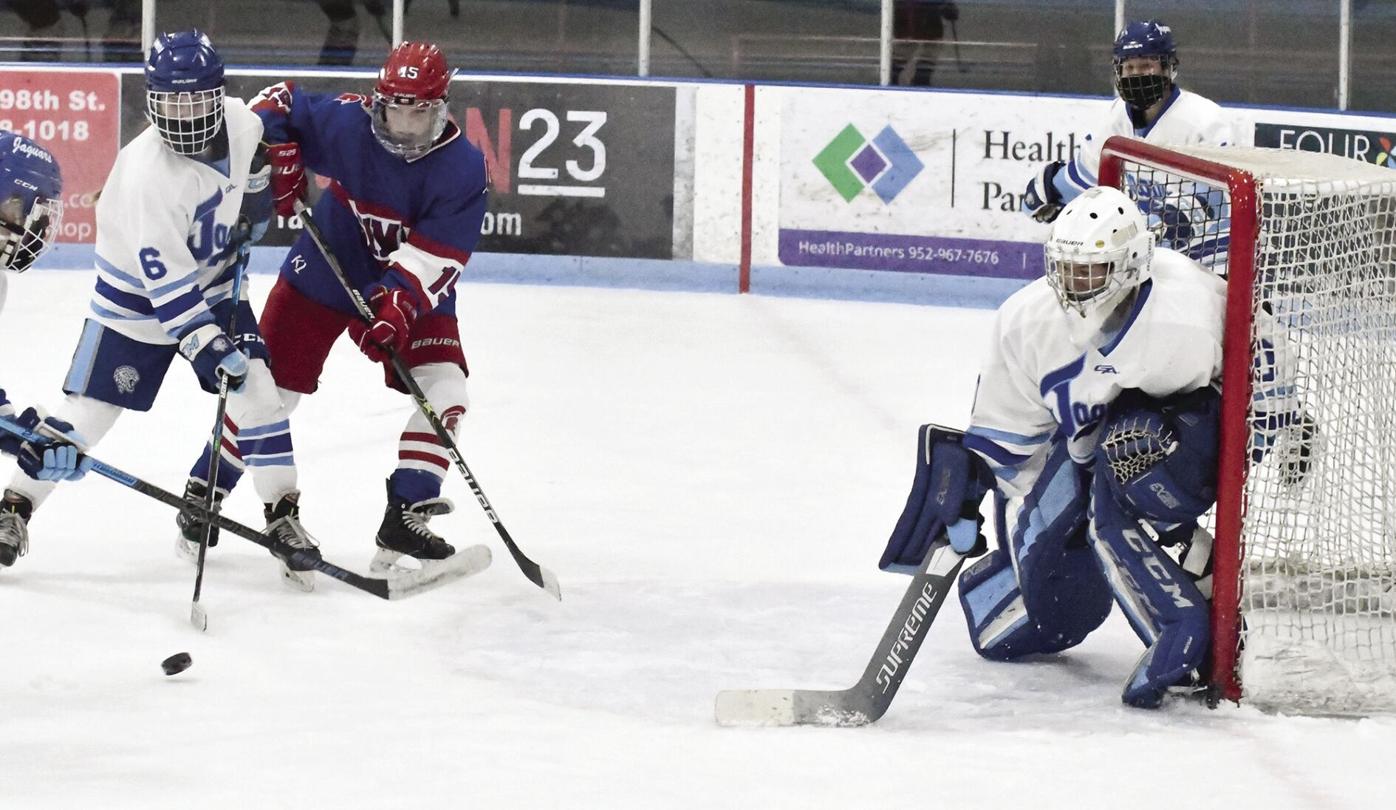 Jaguars goaltender Chasity Anderson made a season-high 50 saves during Saturday’s 2-2 draw against Simley on Jan. 30 in Bloomington. 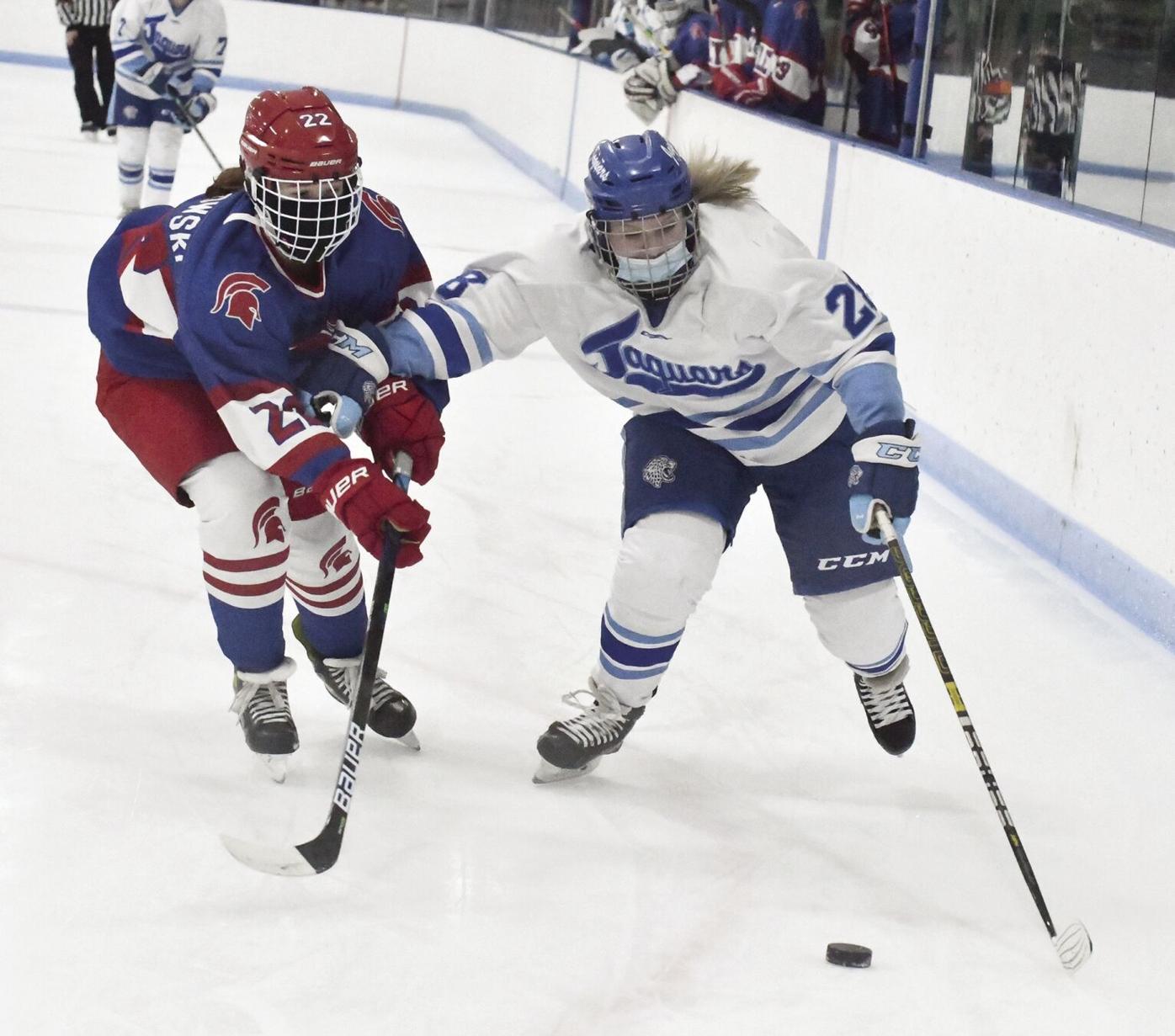 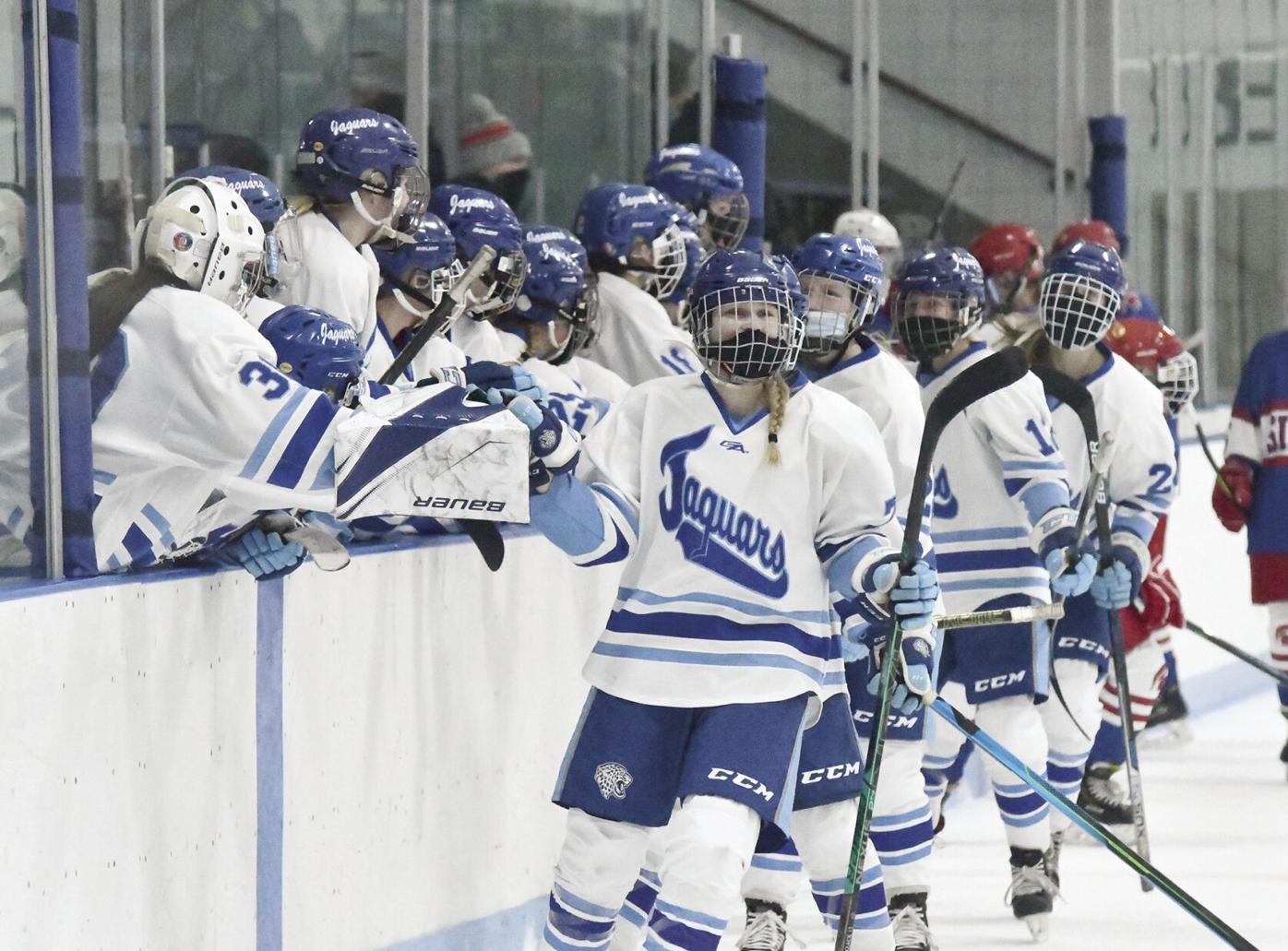 Jefferson junior Abby Longhenry high-fives the bench after scoring in the first period against Simley on Saturday at BIG.

Jefferson junior Abby Longhenry scored her second goal of the season just over 13 minutes into Saturday’s 2-2 draw against fourth-ranked (Class A) Simley.

Just over three minutes later Schuck made it 2-0 with another goal from near the crease. This time the assists went to Longhenry and Emily Wozniak.

Simley tied the game with a pair of goals less than eight minutes into the second period for what turned out to be the final score.

Jefferson had a chance to win it at the end of the eight-minute overtime but the referee closest to the goal line determined Longhenry’s tip-in of Cayla Jungwirth’s shot came after the final buzzer sounded.

“I was happy with how they competed against the fourth-ranked team in the state,” Jefferson coach Mike Ryan said. Junior goaltender Chasity Anderson made 50 saves, including all three in overtime. “The girls gave a good effort, good energy and thought we snuck one in at the end but the ref had to make the decision and credit him for making a very confident call. It was no goal and he explained it to me. Hopefully, we will get the next one.”

The ebbs and flows of momentum were apparent during the entire game as Simley came out strong with an aggressive forecheck, which limited Jefferson’s ability to hold the puck in the offensive zone.

“We cleaned things up in front of our net to make sure their opportunities were not good scoring chances by keeping them to the outside and making sure Chasity could see the puck because if she can see it, she can stop it,” Ryan said.

The Jefferson coach felt the team matured as the game went on in a way they hadn’t five games into the different season.

“They realized how good it feels to compete for three periods and they played hard for each other,” he said. “They took a big step forward and continue to fight. [Saturday] was good came for us getting a feel for some identity.”

Heading into the third period, the Jaguars found themselves in a good spot to earn the win, “which is so hard to do with our schedule and to the girls’ credit, they tilted the ice back our way in a big way,” Ryan said. Morgan Jones was denied on a breakaway and Anderson made key stops over the final 17 plus eight minutes.

Jungwirth, Wendorf and Johnson continue to anchor the defense while the offense continues to search for consistency to create more offense both in shots production and time in the offensive zone to help relieve the pressure on the defensive end of the ice.

Jefferson struggled to capitalize its chances two nights earlier in a 3-1 loss to Holy Angels (2-2, 1-2) in a game played at Richfield Ice Arena.

Jones scored in the final minute of regulation on a 6-on-4 power play before Holy Angels’ Bella LaMere added an empty-net goal for the final 3-1 score.

The Stars scored early in the first and second periods, just over the three-minute mark to lead 2-0 until the final minute. LaMere played a role in each of the goals, including setting up Ava Dean’s first-period goal with Harper Poehling. LaMere scored with an assist from Dean in the second period.

The win was the first Metro West Conference victory of the season for the Stars, which improved to 2-2 overall.

Anderson’s 32 saves were the second-fewest of the season, followed by Saturday’s season-high mark of 50 saves. She boasts a 2.91 goals-against average and .929 saves percentage.