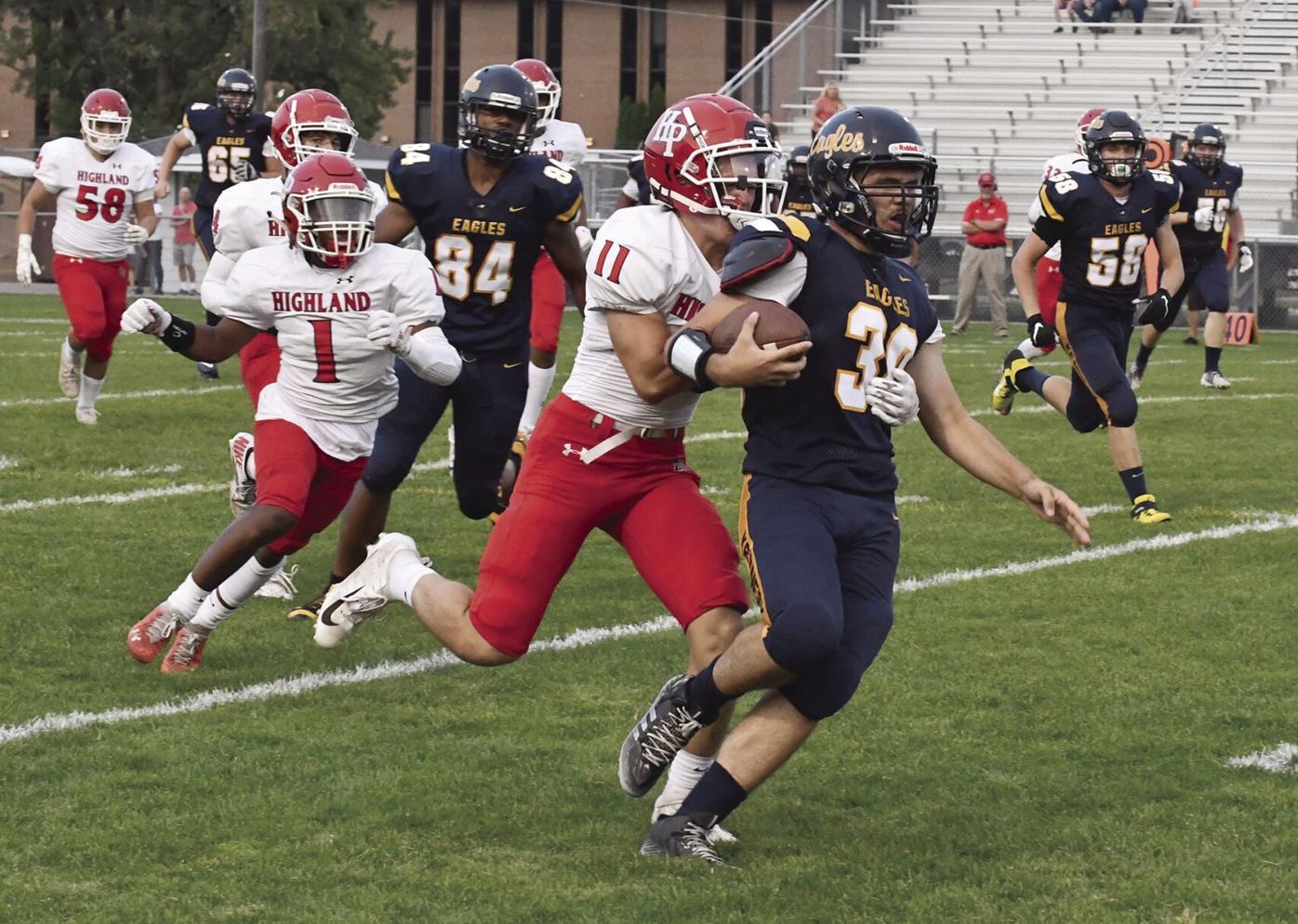 Kennedy junior Gunther Johnson runs away from the Highland Park defense during the Sept. 10 game. 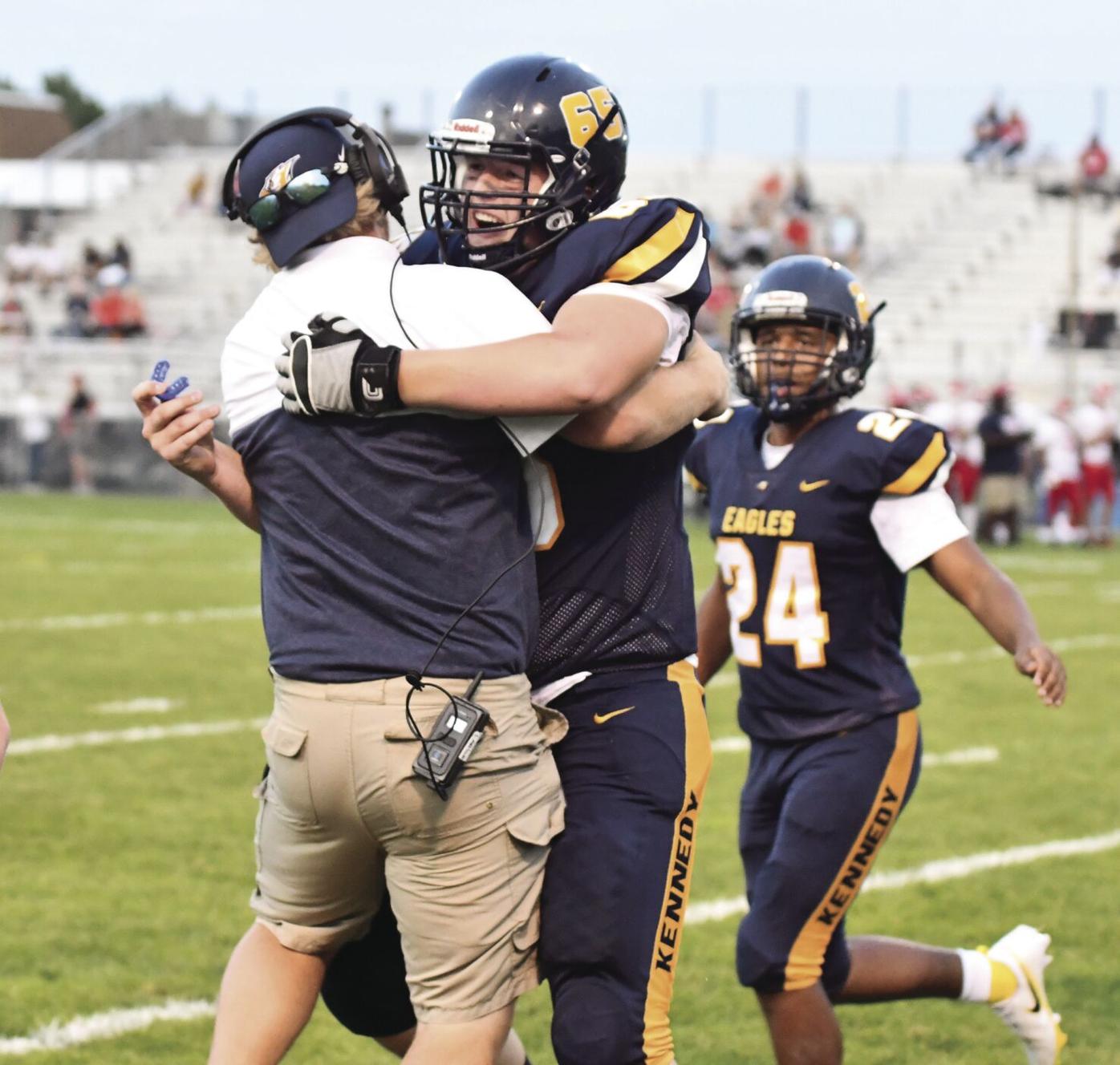 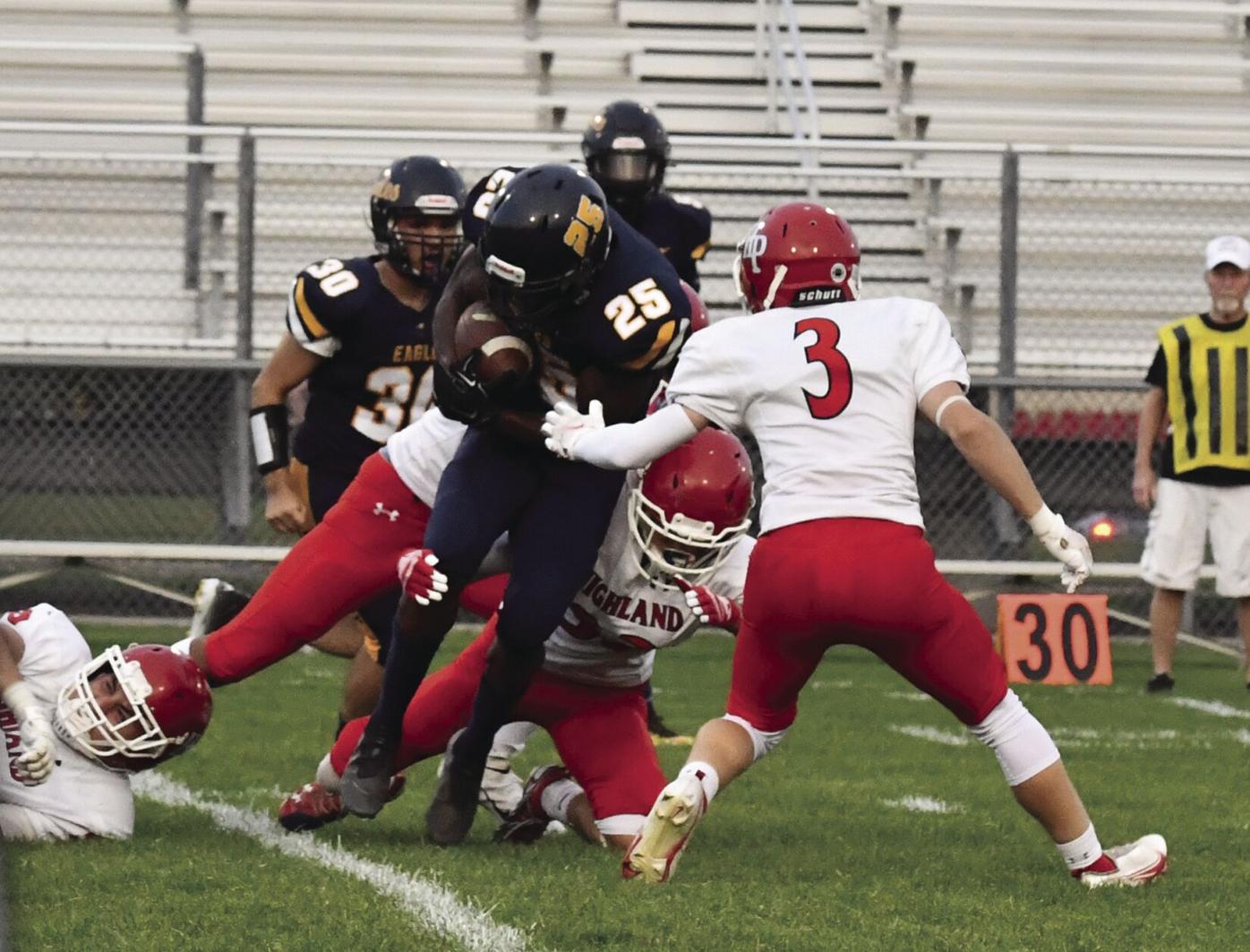 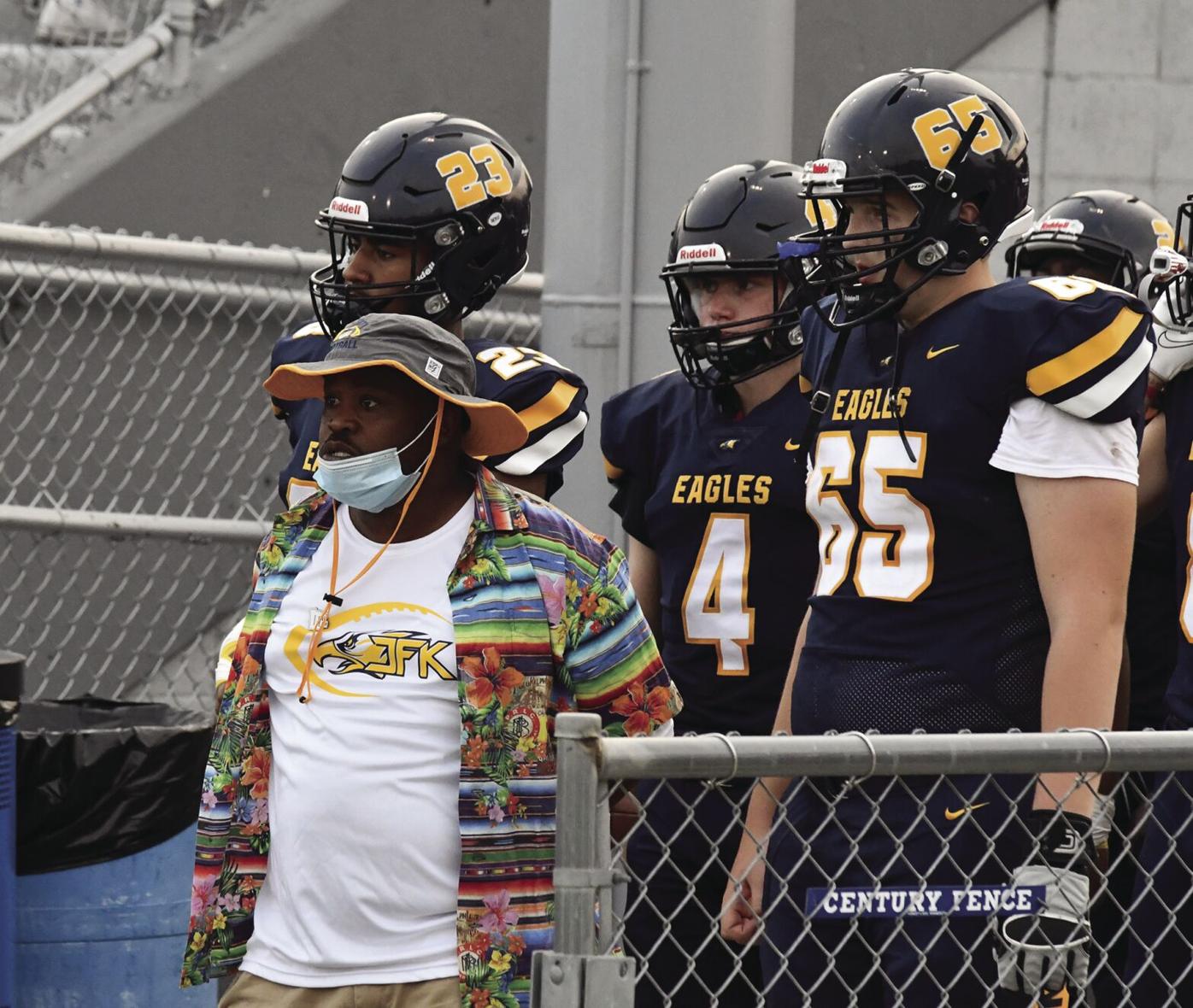 For the first time in a decade, Kennedy football is 1-1 with a win in the home opener at Bloomington Stadium. With the student section, including head coach Kedrick Williams, front, dressed in Hawaiian shirts and Kennedy flare, the Eagles downed St. Paul Central 27-7 on Sept. 10. Teammates pictured from left are Marques Monroe, Zach Zesch and Jeffrey Keller. 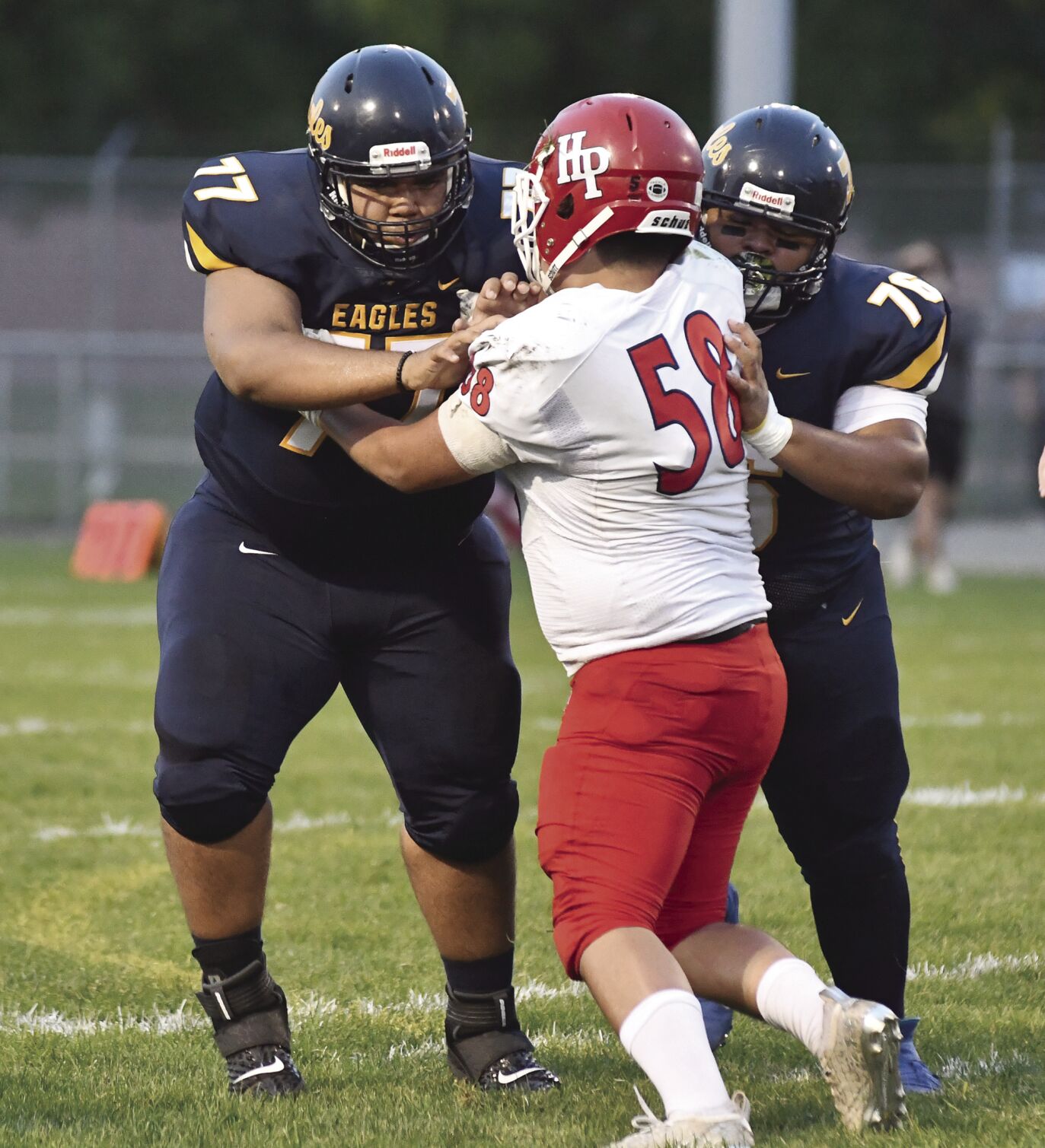 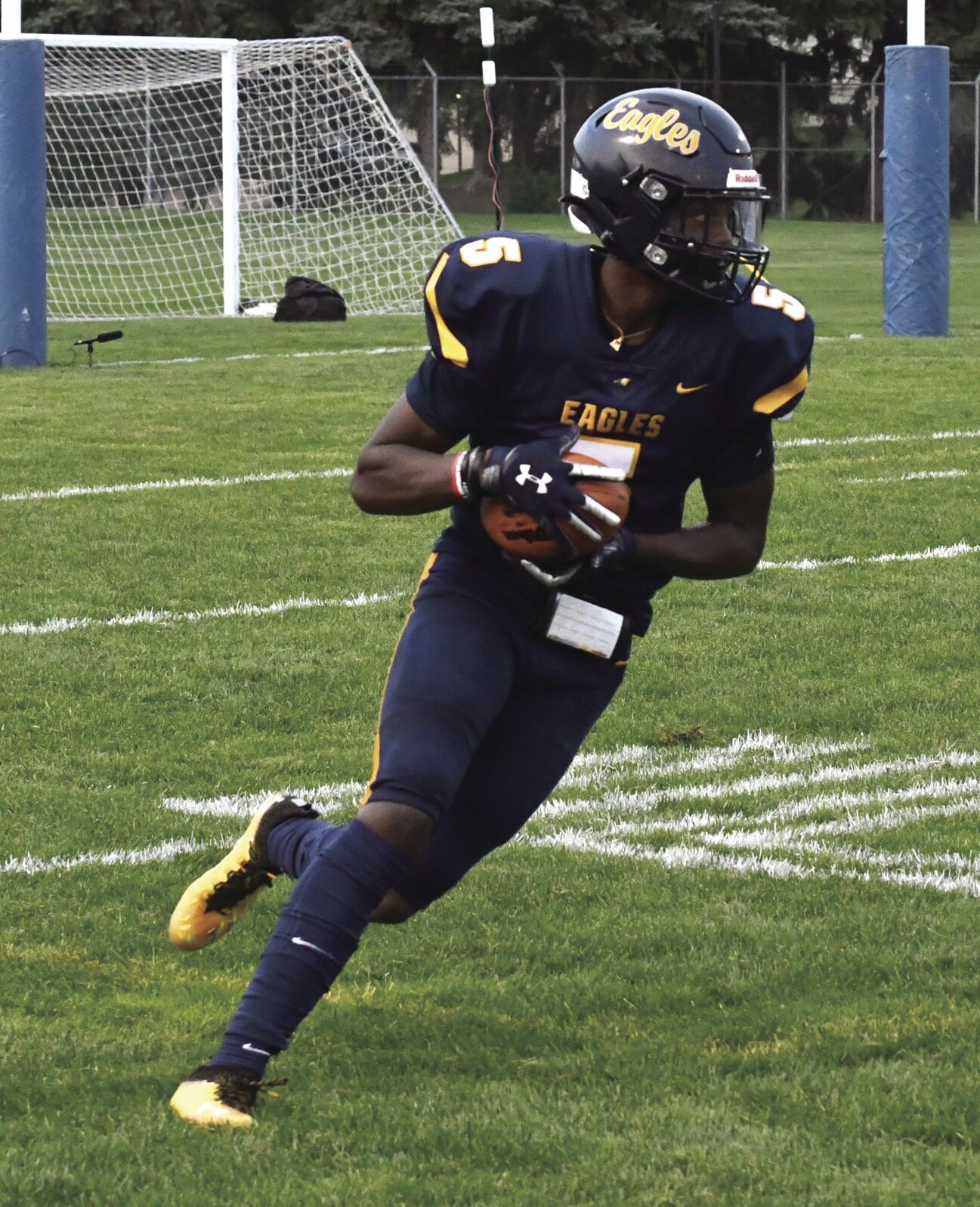 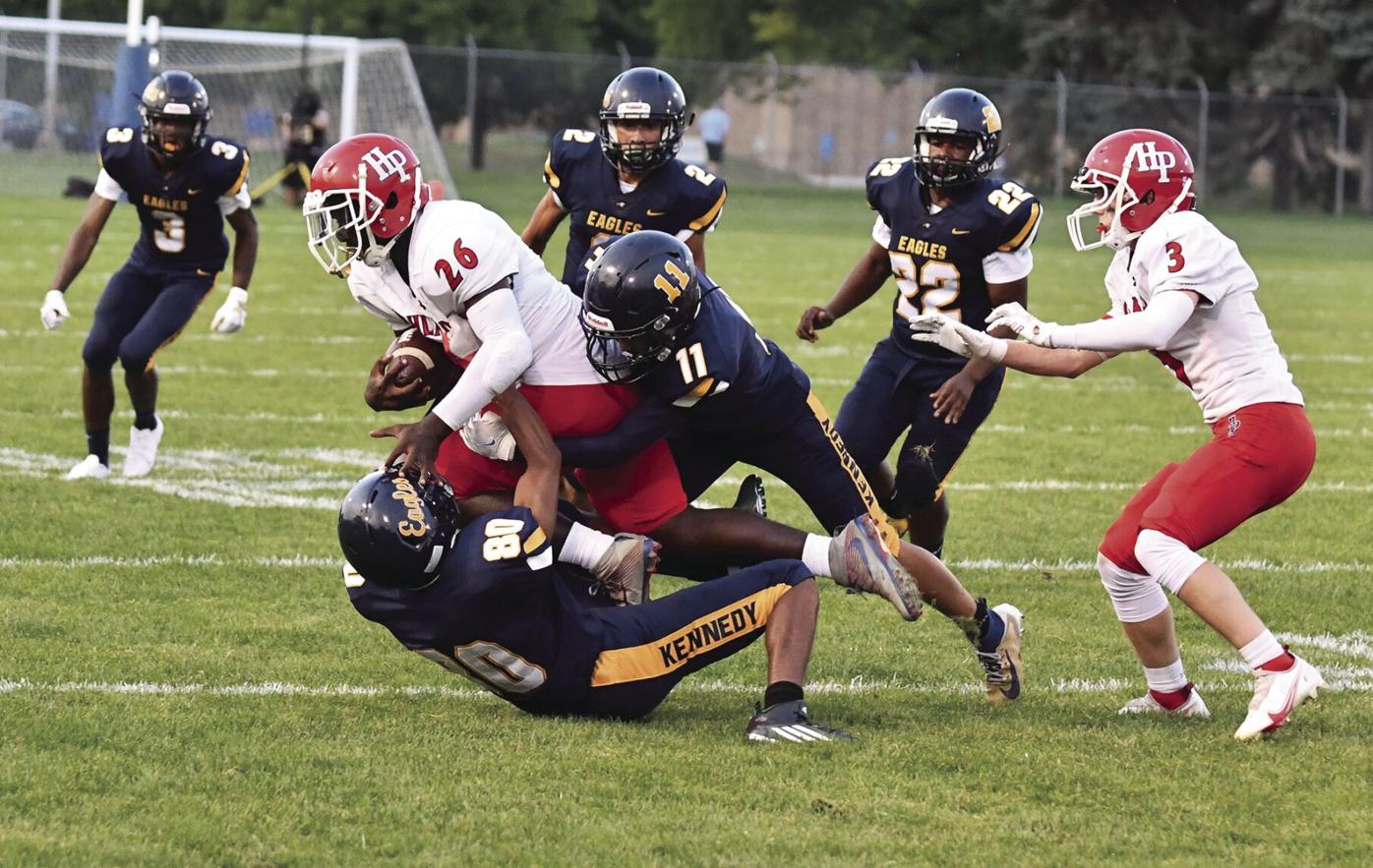 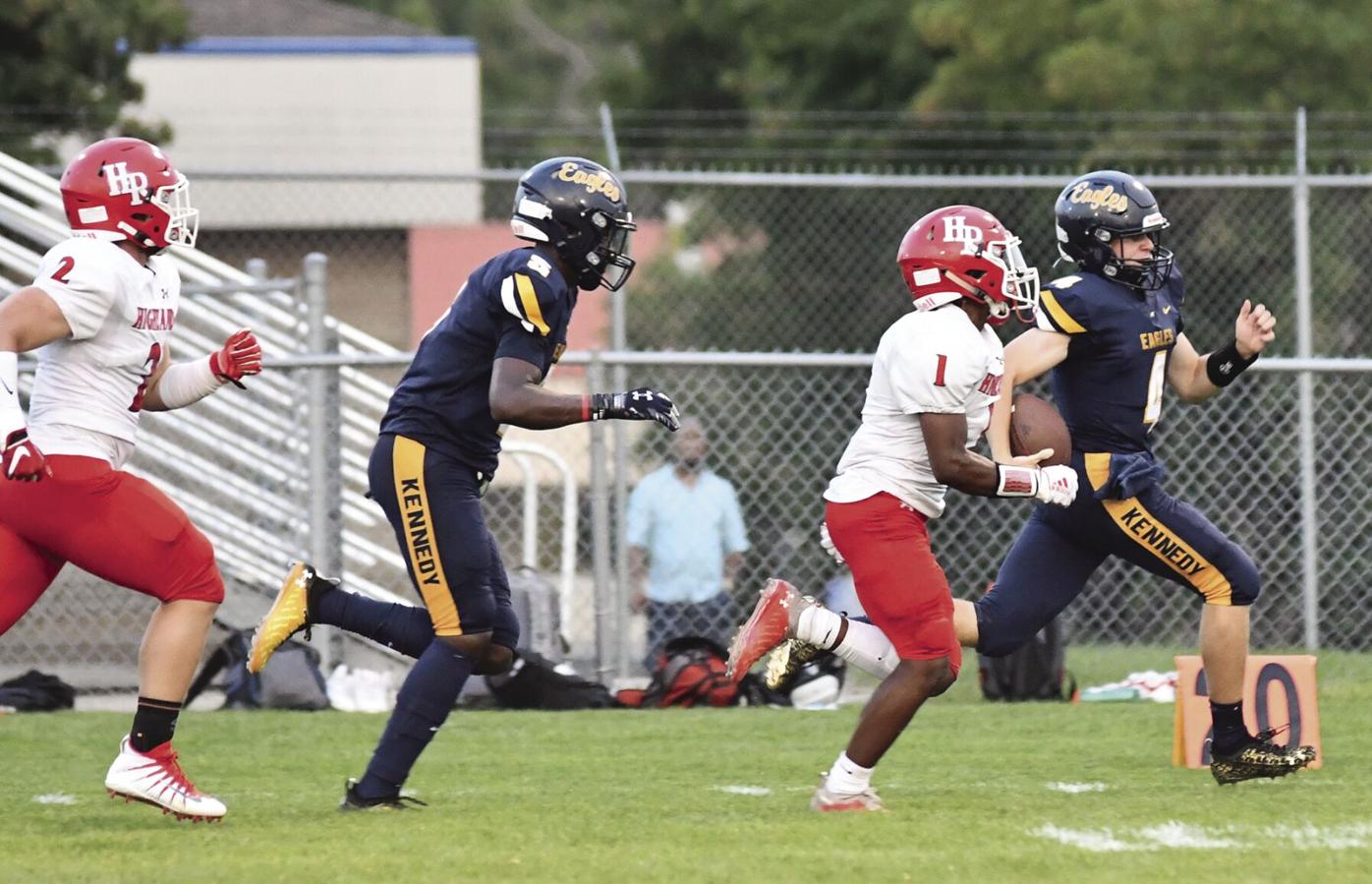 Kennedy quarterback Zach Zesch, right, busts down the sideline on a 58-yard touchdown early in the Sept. 10 home opener at Bloomington Stadium. Junior Rayzjon Walker, second from left, provided a key block as Zesch ran down the sideline. 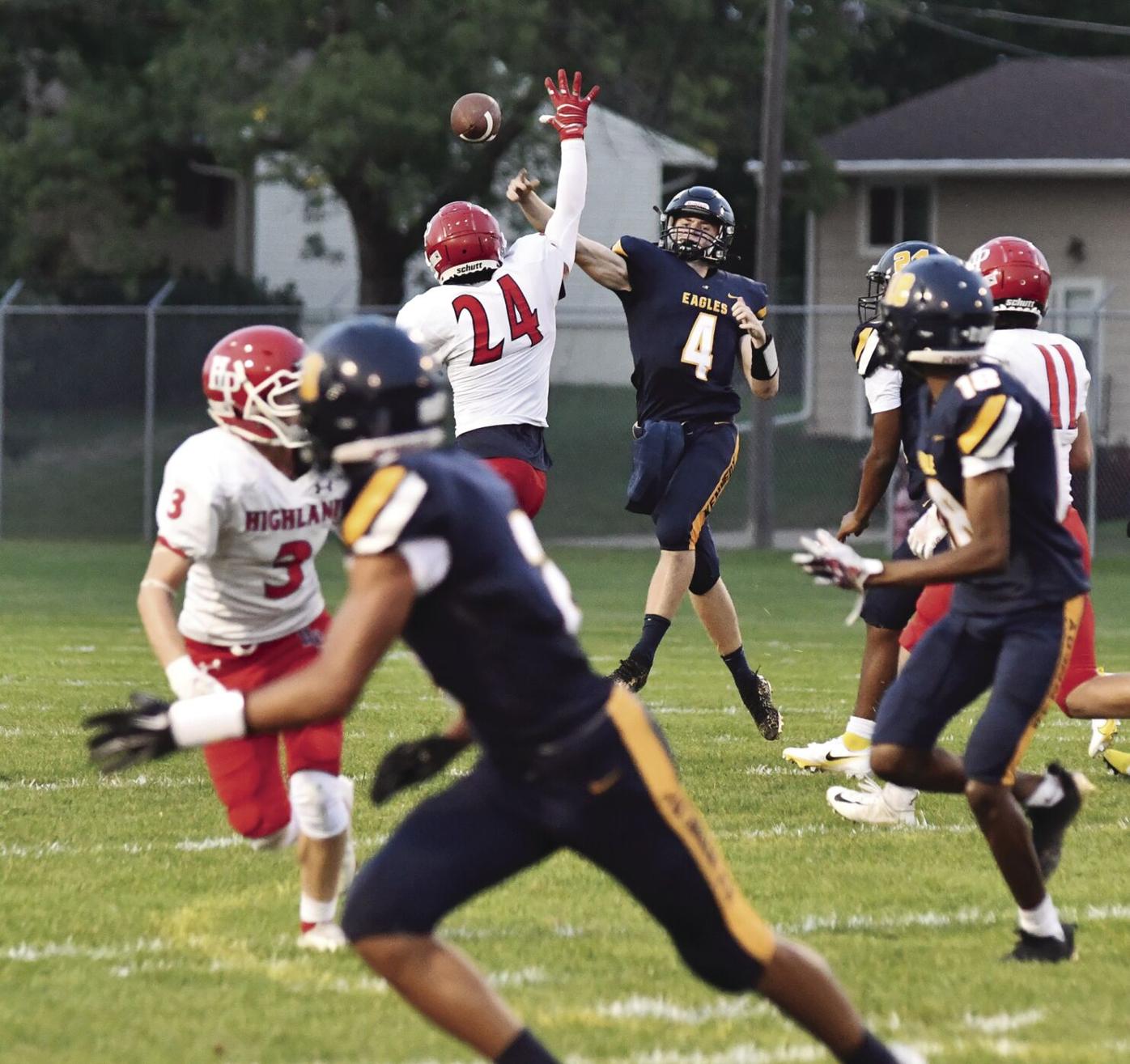 Kennedy quarterback Zach Zesch (4) completed 10-14 passes for 93 yards and one touchdown in addition to four carries for 143 yards and two touchdowns during a 27-7 win over Highland Park Sept. 10.

Kennedy junior Gunther Johnson runs away from the Highland Park defense during the Sept. 10 game.

The Eagles were successful in all phases of the game, not only picking up the first win of 2021, but doing so in a convincing fashion.

Coach Kedrick Williams talked to the team about stringing together multiple days of solid practice and that’s what they did between the Week 1 loss at Park Center and the home win Sept. 10.

“We did that after we went to the scrimmages before the opener and we got back to being more disciplined and more strict on our behavior, preaching the uncoachables like effort, heart and how much, how long are you willing to go for this,” he said. The Eagles are 1-1 with a home opener win for the first time in a decade.

A sign of progress on defense came on multiple goal-line stands. “We talk about making the stop on 5-yards or less and that is a sign of a team ready to grow up and move to the next level,” he said. “The defense was swarming and since we’ve taken over we lay our hat on the defense. It wasn’t always pretty.”

That progress for Williams began in 2019 but the COVID-19 disruption played a big factor in continuing to build up the program. “It took us four games before we started competing last year. Sorry to the guys last year but it came at a really bad time,” he said.  “I was proud of the guys tonight because they were ready to go.”

Zesch accounted for all three touchdowns in the opening half, including the first score 5:30 into the game on a well-executed cutback run that went 58 yards for a touchdown.

Zesch and the offensive line sold the running play to the right before cutting back across the field. Junior Rayzjon Walker escorted Zesch along the Scots sideline, providing key blocks to spring him free.

Zesch went even farther for his second touchdown, this time 82 yards along the Eagles sideline,

crossing into the end zone in front of the student section. The score made it 13-0 for Kennedy with 2:54 to play in the half.

Looking to add to the positive momentum, Kennedy’s short kick was recovered by junior Javon Davis near midfield to see if the Eagles could add more points before halftime.

Zesch rolled left to find Chris Martin on a huge third-down and long conversion not only to move the chains but the junior tight end stopped by clock by stepping out of bounds inside the 25-yard line with 49 seconds on the clock.

The play-action fake set up a near-perfect throw from Zesch to Walker’s back shoulder for the 23-yard touchdown. Zesch wasn’t done as he scored the two-point conversion on a read-option to make it 21-0 into halftime.

Zesch ran 143 yards on just four carries in addition to 10-of-14 passes for 93 yards to earn the game ball from the coaching staff after the game.

“Zach’s taken a lot of pressure from a lot of people, including me at times,” Williams said. “He said he wanted the ball again this year and showed that by getting into the weight room. Two years ago he was successful because he made defenses pay with his arms and legs. This week he had an ah-ha moment to get that monkey off his back. He stepped up as a junior to the quarterback when no one else would.”

The offense ran for 187 yards on 20 carries as Saide Allasani, Erick Johnson, and Davis each had 17 yards rushing. Johnson and Martin each had two catches and Toby Somsacksy had a team-high three catches.

After nearly intercepting the ball on a goal-line stand, Kennedy junior Marques Monroe not only held on for the interception on the goal line, but returned it 100 yards for the touchdown to take a 27-0 lead with 7:37 left in the contest.

After returning to the bench, Monroe held onto the championship belt and wore the golden eagle chain to celebrate.

Kennedy is at Minneapolis Washburn with a 6 p.m. kickoff set for Friday, Sept. 17 before hosting Richfield at noon Saturday, Sept. 25.