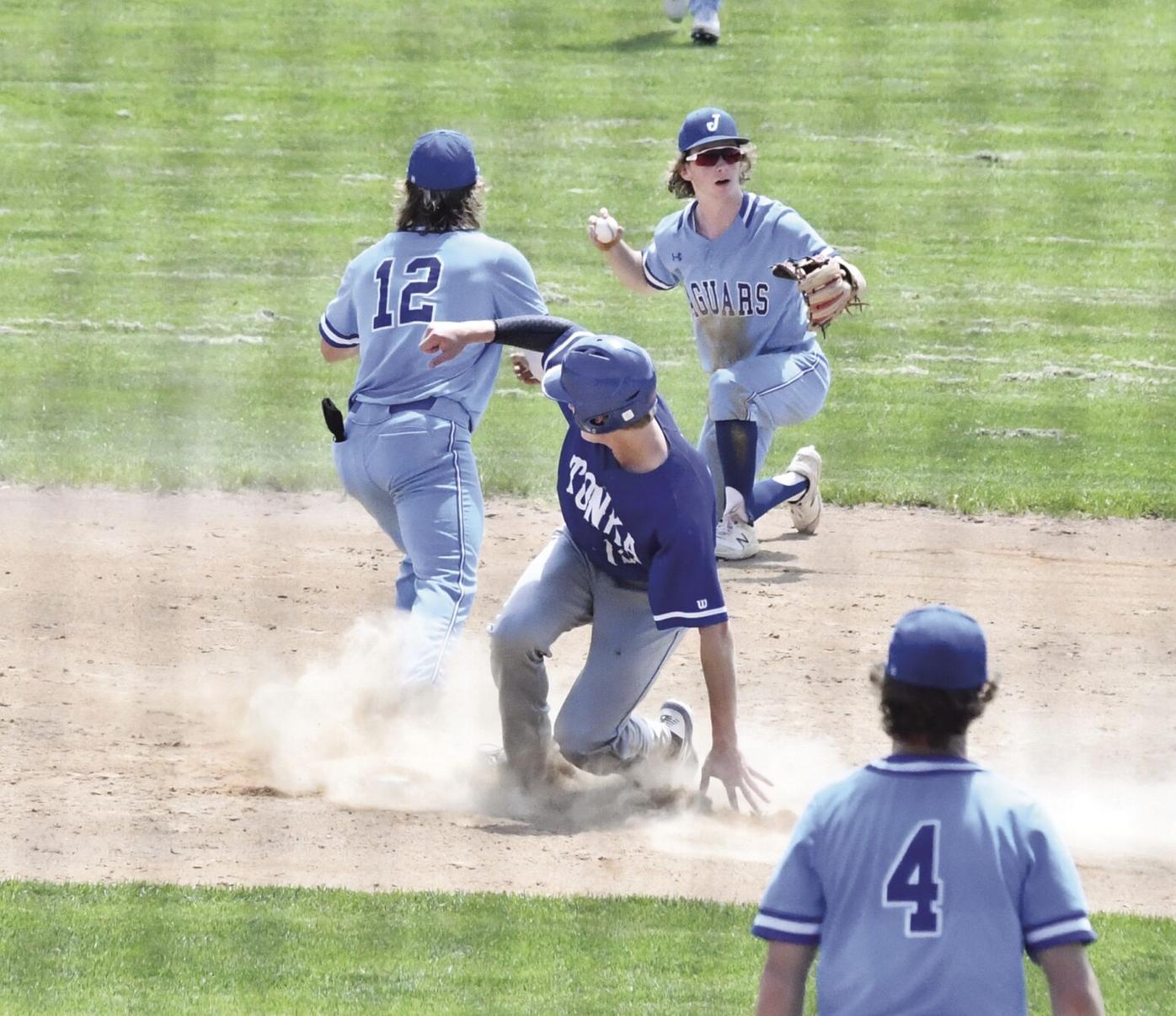 Jefferson’s Braden Ebeling shows the ball after an acrobatic play to keep the ball in the infield while shortstop Bennett McCollow stays in position at second base. 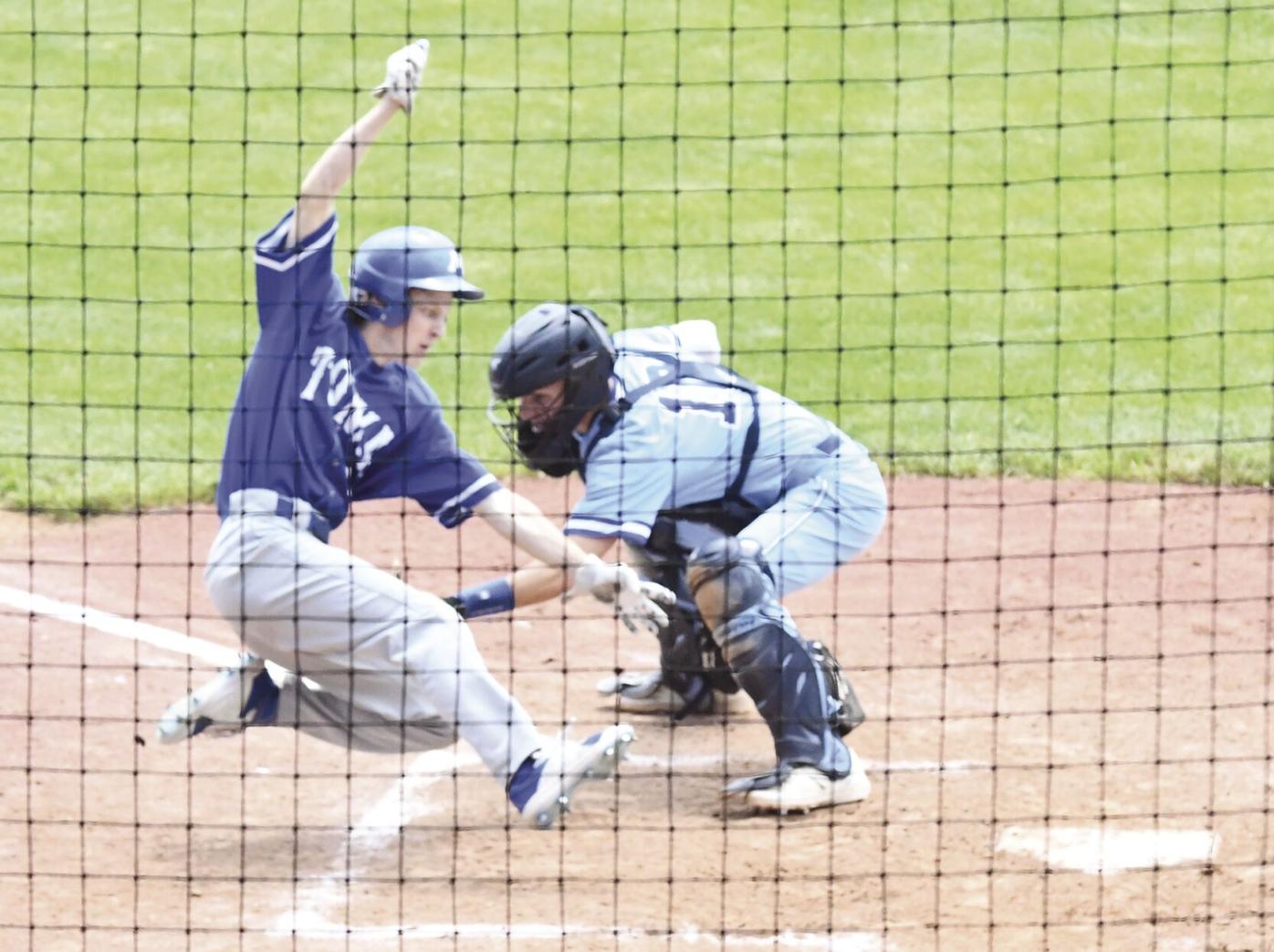 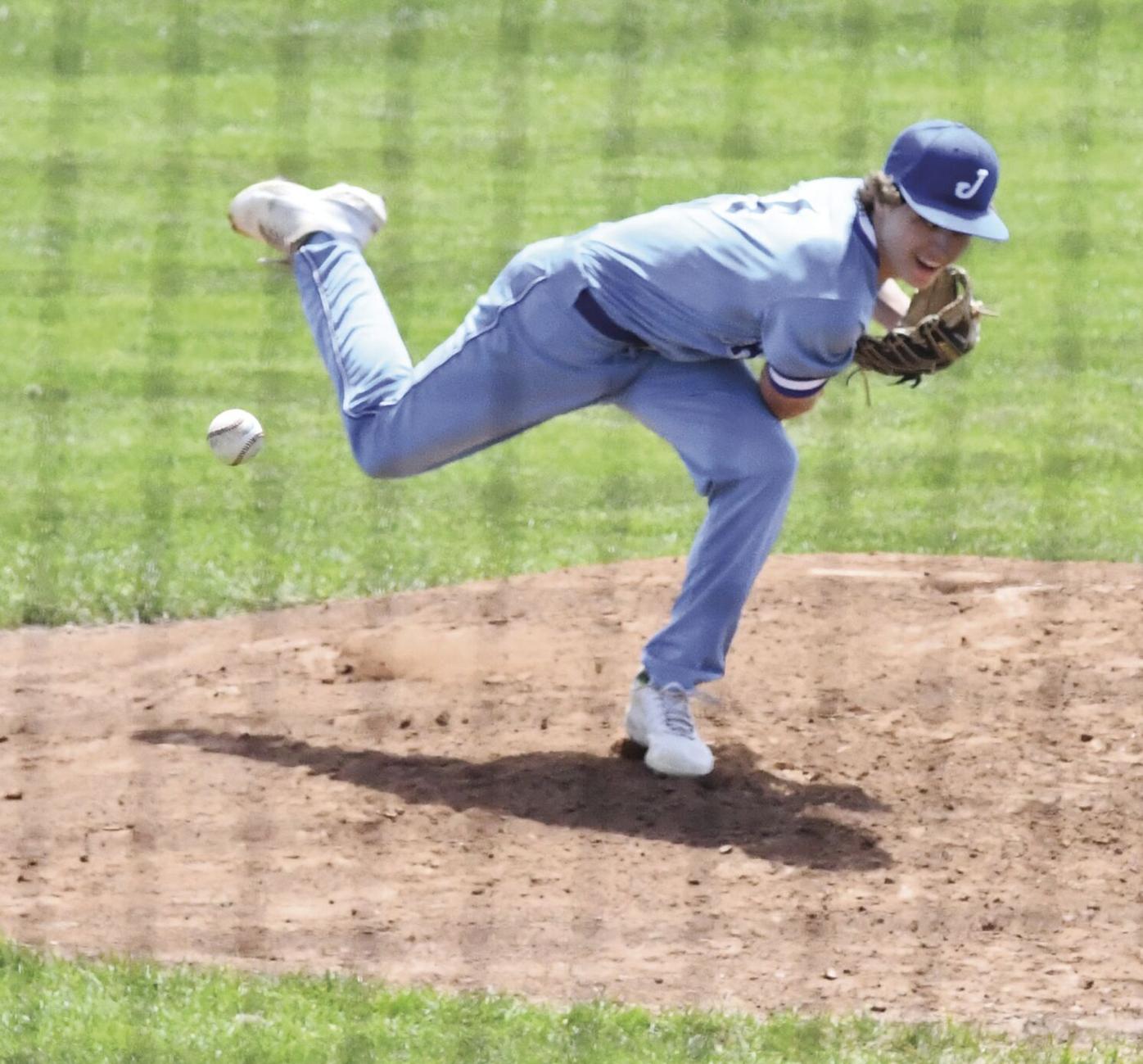 Bloomington Jefferson was rewarded for a perfect 9-0 run to the Metro West Conference title and a 12-1 regular season with the No. 1 seed in Section 2AAAA.

The Jaguars used every ounce of energy and enthusiasm generated by the largest crowd to fill the Toro Grandstand at Red Haddox Field in over a year in a 4-3 walk-off win over Eden Prairie May 31.

Bennett McCollow continued to etch his place in Jaguars baseball lore with a walk-off home run in the eighth inning over the fence in left-centerfield for his third hit of the day.

The Eagles built a 3-0 lead but Jefferson turned a double play to get out of the second inning without more damage. Offensively, Jefferson chipped away at the deficit as Braden Ebeling started the third inning with a double and McCollow moved him to third base with a single. Senior captain David Steffen’s RBI single past the shortstop made it 3-1.

Ebeling and McCollow were far from done as Ebeling was hit by a pitch with two outs in the fourth inning. McCollow’s double allowed Ebeling to score from first base to make it a 3-2 game.

Once again it was Ebeling who came through in the sixth inning with the game-tying double to allow Aiden Shermak to score. Walks to McCollow and Carter Hanson loaded the bases before Steffen and Ben Goedderz grounded out to end the inning.

Jefferson pitcher Noah Pinette retired Eden Prairie in order in the seventh and eighth innings to keep the pressure on.

The win allowed Jefferson to advance to face No. 4 Minnetonka in the winner’s bracket at Haddox Field June 2. The Skippers scored three times in the second inning for a 3-0 victory in front of another near sell-out crowd in Bloomington.

Skippers starting pitcher Karsten Kimsal allowed three hits and two walks over six innings. He struck out six Jaguars before Zack Zaetta earned the save in the seventh inning.

Steffen shined in four relief innings. He only allowed two hits and one walk while striking out seven batters.

The Skippers scored all three runs with two outs in the second inning, including a squeeze play on a bunt toward third base as all of the runners safely moved up a base.

Zaetta’s two-run double ended the inning as Goedderz made the tag at the plate to get out of the inning. McCollow made a strong relay throw to beat the Skippers runner to home.

Goedderz ripped a single to right field in the fourth inning and a walk by Sam Malecha put two runners on base before Alex Crusan struck out pinch hitting for Andrew Johnson.

Into the sixth inning, the heart of the Jaguars order went down swinging with three hard-hit flyball outs from Hanson, Steffen and Goedderz on nine pitches.

Down to its final three outs, Pinette reached on an error to start the seventh inning before Malecha successfully bunted his way on base without giving up an out. Johnson returned to his spot in the order in place of Crusan. A fly out continued the string of hard hits for outs with an out to right field. Littman was out on a fly to center field and Ebeling ended it with a fly out to left field.

The loss relegated the Jaguars to the elimination side of the bracket where they faced No. 2 Chanhssen Friday at Haddox Field in an all-Metro West Conference contest. The Storm scored five times in the fourth inning, pounding out 13 hits while Jefferson used five hits and six walks to produce four runs.

Pinette was the starting pitcher, going 3 2/3 innings with five strike outs before Johnson picked up the final out in the fourth inning. Crusan struck out three batters over the final three innings in relief.

Pinette led off the second inning with a base hit and came around to score on an error by the catcher to get on the scoreboard, down 2-1.

He finished with two hits and a walk, while Goedderz had a double and drew a walk. McCollow went 1-for-3 driving in two runs and drew one walk.

Ebeling drew a walk to start the third inning to help Jefferson put the leadoff runner on base for the third consecutive inning. Pinette came up with bases loaded but a ground out ended hopes of a rally in the third inning.

Malecha was hit by a pitch to start the bottom of the fourth inning as the Jaguars trailed 8-1 after a big Storm rally.

Malecha came around to score along with Littman on a McCollow single to cut the lead to 8-3 before a Chanhassen pitching change stopped the comeback attempt with two fly outs.

Goedderz kept the strong start the innings going with a double in the sixth inning followed by a Pinette single and Malecha’s sac fly to center field to make it a 10-4 game.

The Jaguars were retired in order in the sixth and seventh innings to end the game with the only consecutive losses of the season.

Chanhassen advanced to face No. 5 Shakopee in an elimination game on June 7, after this edition went to press, with a spot against No. 7 Prior Lake awaiting the winner on June 8.

Minnetonka advanced to the section final with a 3-2 win over Prior Lake on June 4. The final was played at Veteran’s Field at Minnetonka High School on June 9.