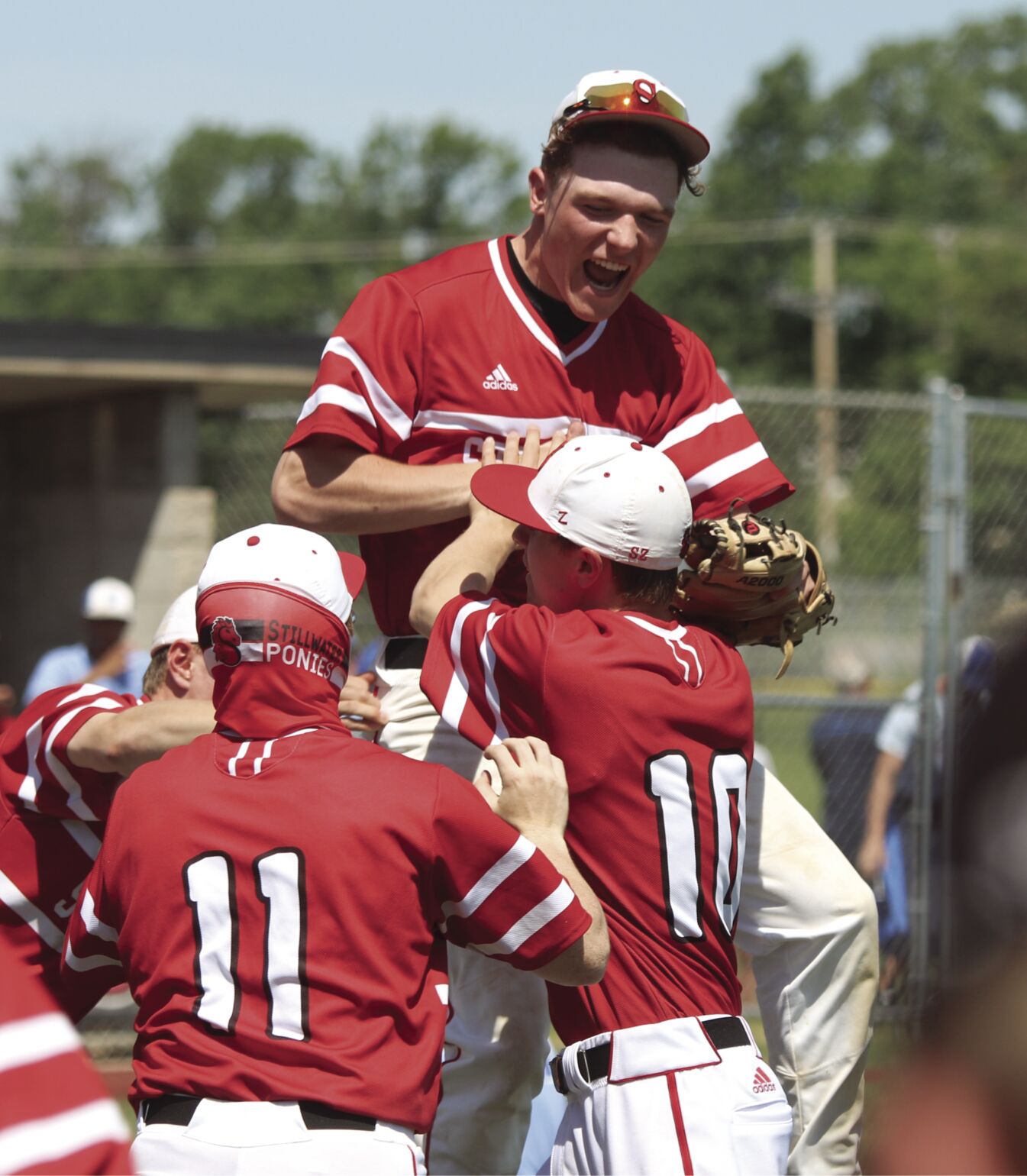 Third baseman Ian Hanlon celebrates with teammates after recording the final out Stillwater’s 7-3 victory over Woodbury in the Section 4AAAA tournament on Saturday, June 5 at SAHS. 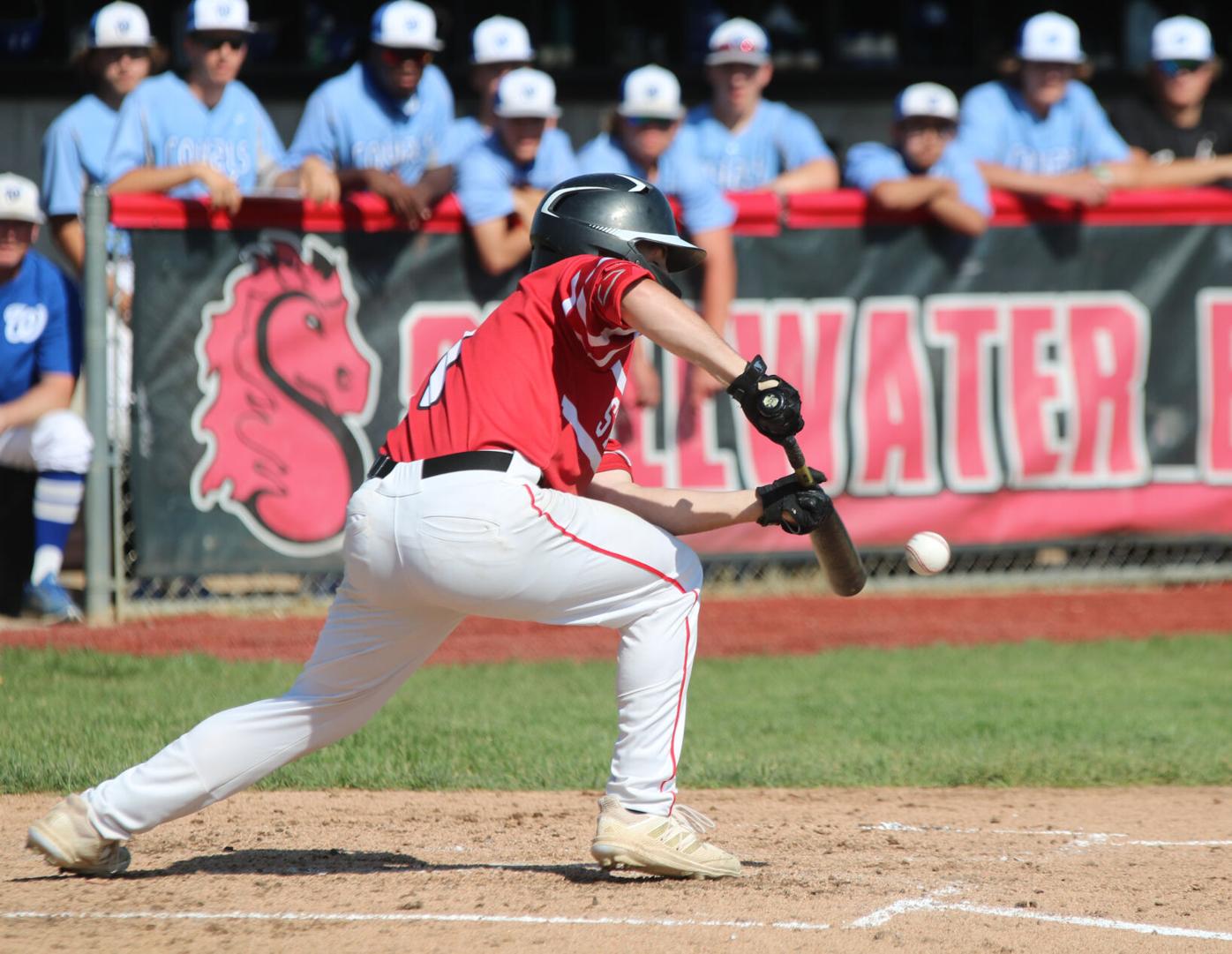 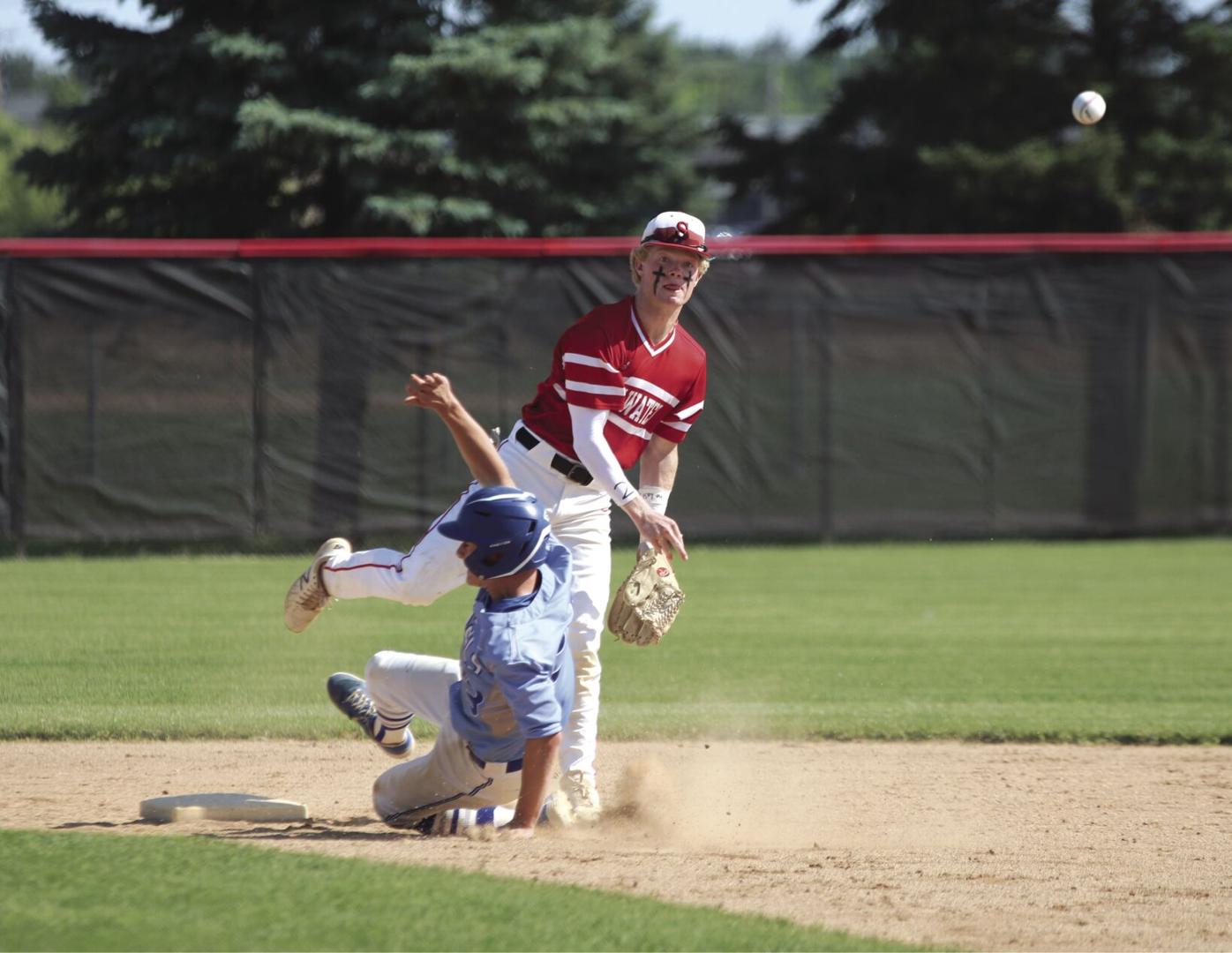 Stillwater second baseman Gavin Madison fires a throw to first base to complete a double play during the Ponies’ 7-3 victory over Woodbury in the winners bracket finals of the Section 4AAAA tournament on Saturday, June 5 at Stillwater Area High School. (Gazette staff photo by Stuart Groskreutz) 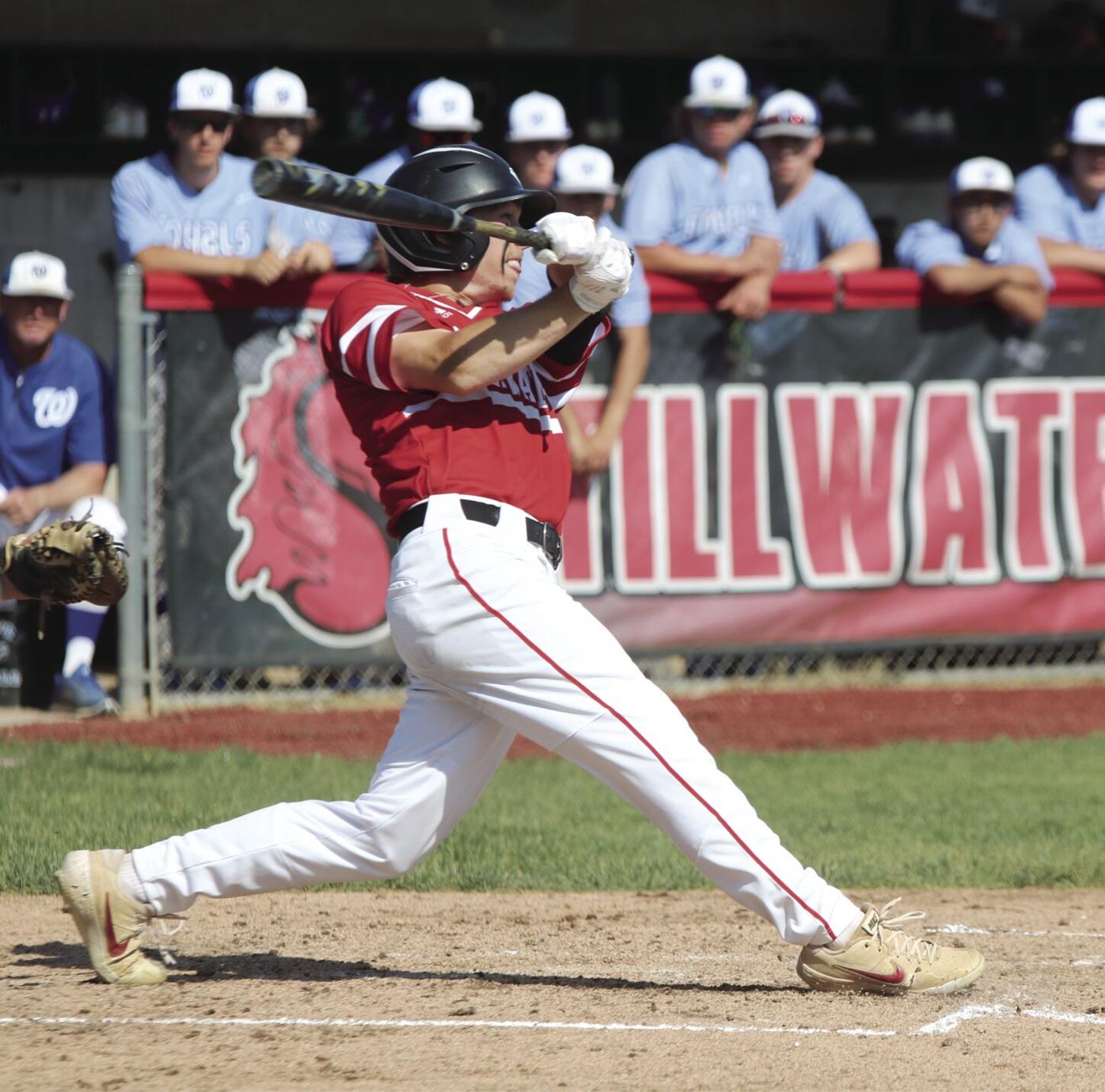 Kade Peloquin drives an RBI double to the fence in center to give Stillwater a 1-0 lead over Woodbury in an eventual 7-3 triumph the winners bracket finals of the Section 4AAAA baseball tournament on Saturday, June 5 at Stillwater Area High School. (Gazette staff photo by Stuart Groskreutz) 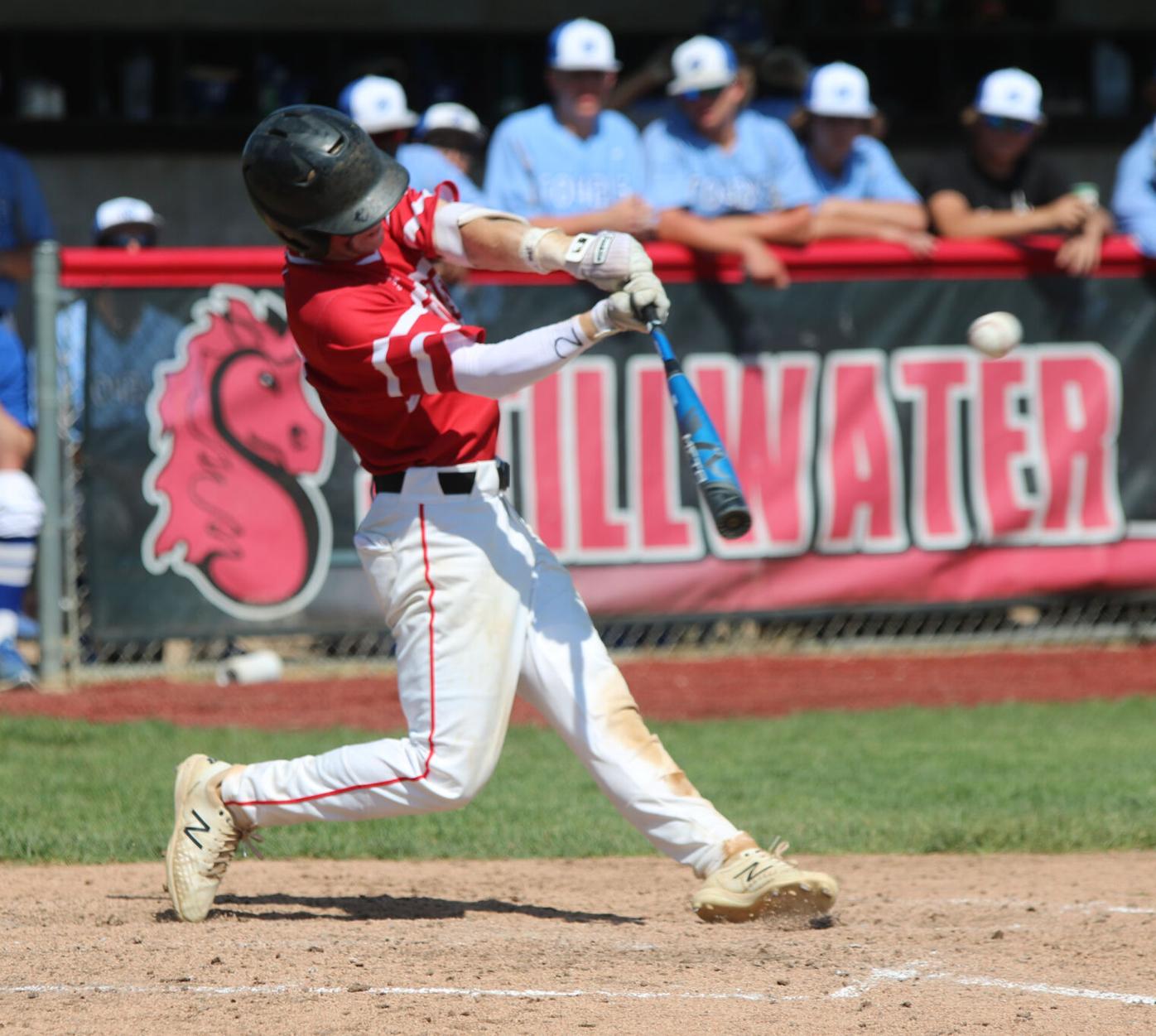 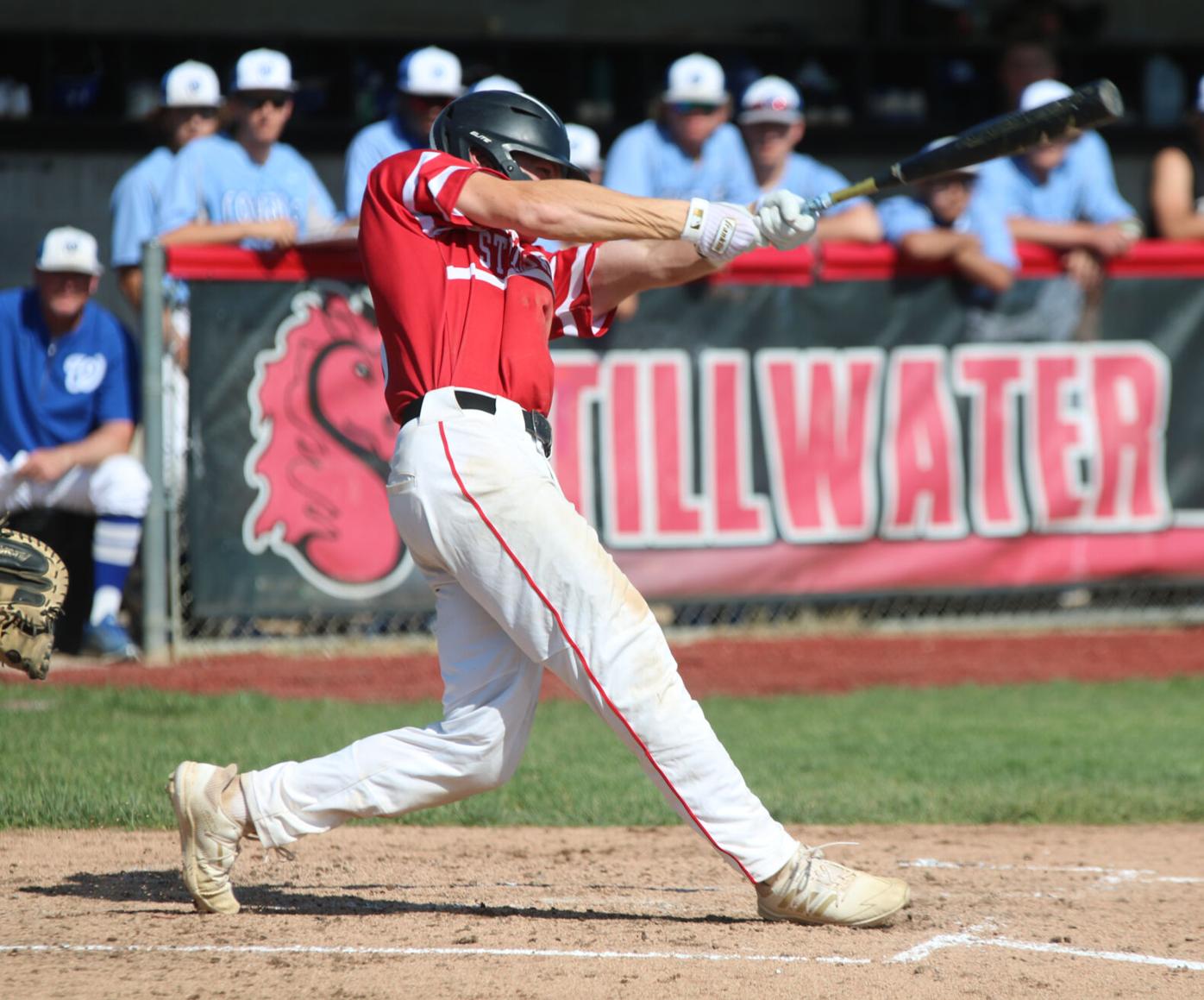 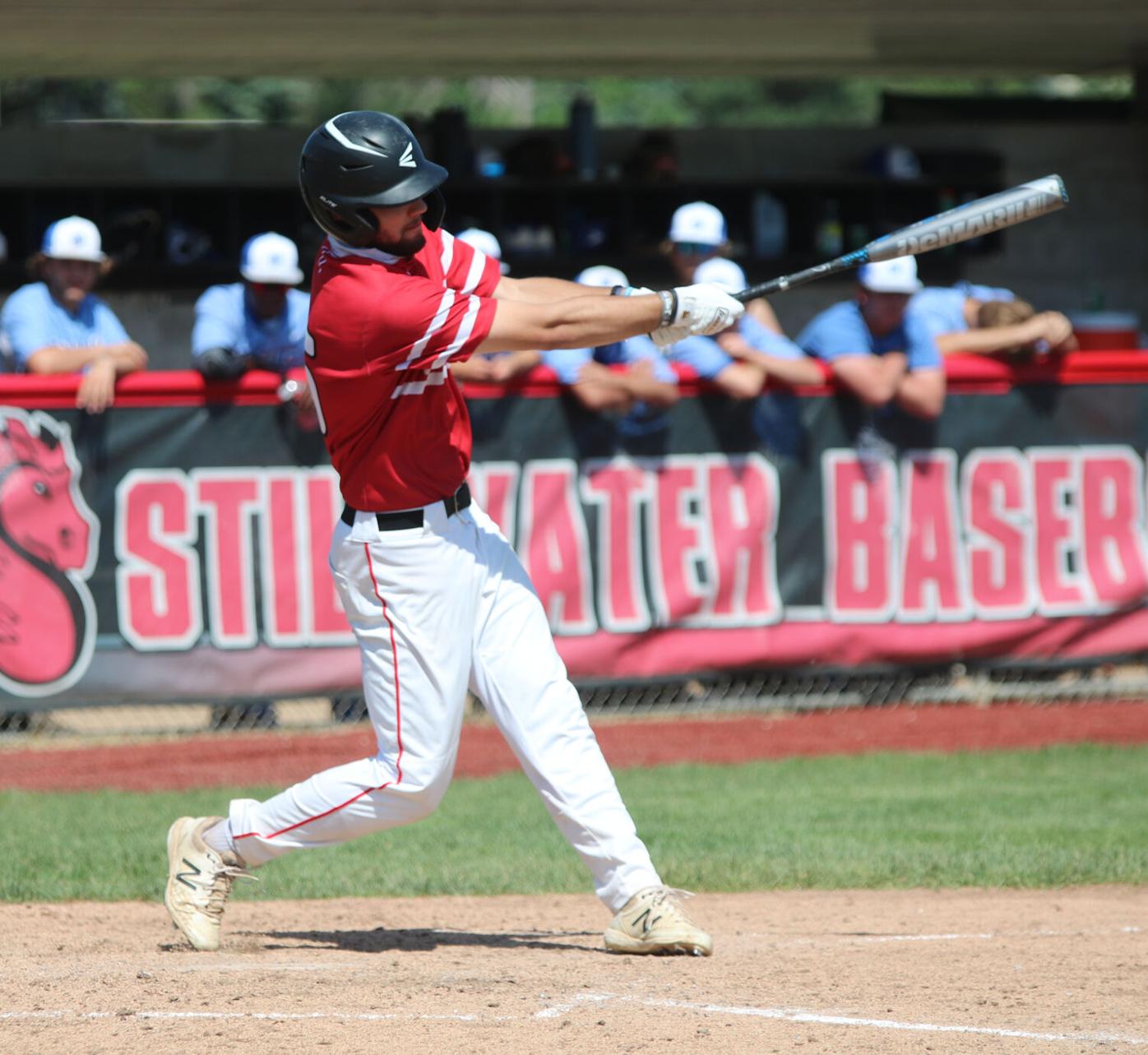 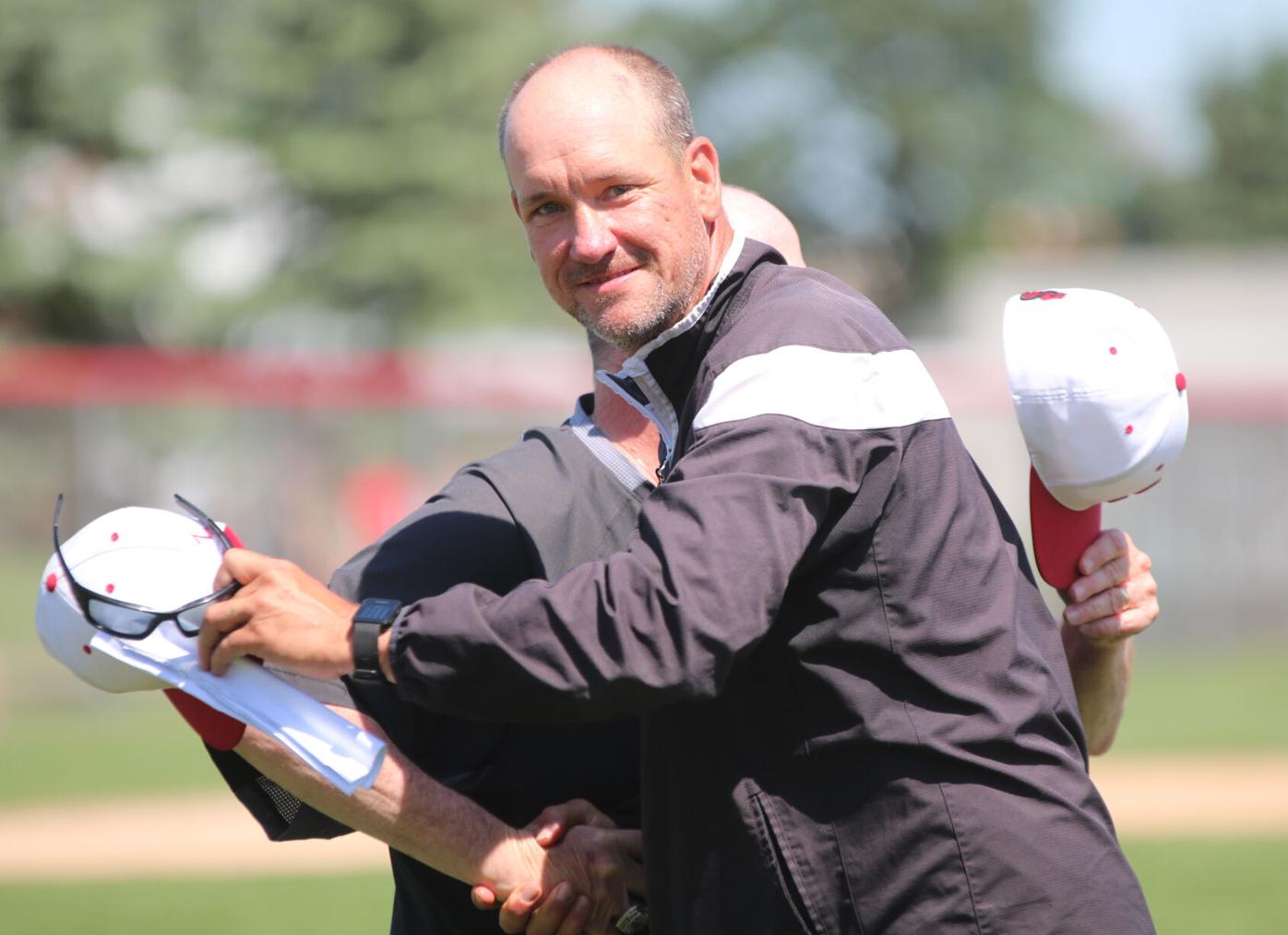 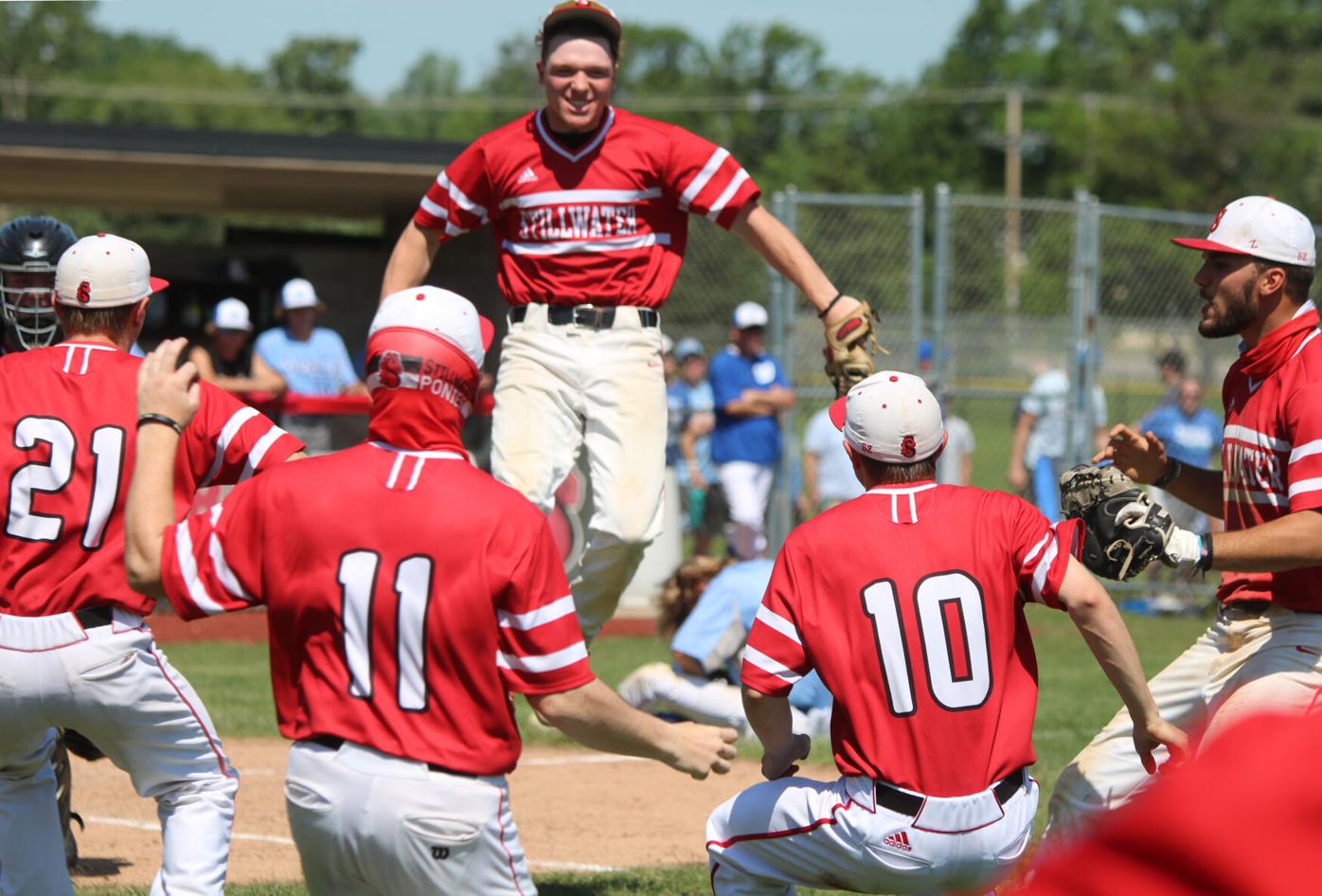 Third baseman Ian Hanlon celebrates with teammates after recording the final out Stillwater’s 7-3 victory over Woodbury in the Section 4AAAA tournament on Saturday, June 5 at SAHS.

Stillwater second baseman Gavin Madison fires a throw to first base to complete a double play during the Ponies’ 7-3 victory over Woodbury in the winners bracket finals of the Section 4AAAA tournament on Saturday, June 5 at Stillwater Area High School. (Gazette staff photo by Stuart Groskreutz)

Kade Peloquin drives an RBI double to the fence in center to give Stillwater a 1-0 lead over Woodbury in an eventual 7-3 triumph the winners bracket finals of the Section 4AAAA baseball tournament on Saturday, June 5 at Stillwater Area High School. (Gazette staff photo by Stuart Groskreutz)

ROSEVILLE — It was a largely drama-free Section 4AAAA tournament for the Stillwater baseball team, which notched another shutout while advancing to state for the third season in a row.

The top-seeded Ponies, who improved to 20-4, blanked Cretin-Derham Hall 5-0 in the section championship game on Wednesday, June 9 at Northwestern University. It was the third shutout in four games for Stillwater, which outscored its section opponents by a combined 34-3.

The Ponies will face an opponent to be determined in the state quarterfinals on Tuesday, June 15 at Chaska Athletic Park. The semifinals are scheduled for June 16. Stillwater is one of three Suburban East Confernece teams to qualify for state as Park prevailed in Section 3AAAA and Mounds View advanced out of Section 5AAAA.

Gavin Zurn was sharp on the mound for the Ponies, allowing just two hits and striking out eight in the complete game. He did not walk a batter.

“He didn’t allow anybody to third base and really didn’t have much pressure,” Stillwater coach Mike Parker said. “He didn’t walk anybody and his outing was really good, maybe his best outing of the year. When it’s warm out, he throws a little bit harder and he had really good velocity and that set up his curveball.”

Zurn, a North Dakota State University recruit, threw 62 of his 92 pitches for strikes and the Ponies played error-less defense behind him.

“The defense was super strong again,” Parker said. “Our fielders continue to play outstanding defense. All of our infielders, (Jack) Wallace, (Gavin) Madison, (Ian) Hanlon and (Alex) Ritzer all made really nice plays for us.”

Coming out of the losers bracket, the fourth-seeded Raiders (11-15) would have needed to defeat Stillwater twice on Wednesday to capture the section title and advance to state for the first time since 2007.

“We didn’t want to play a second one,” Parker said. “We had depth and guys who were ready to play a different lineup in the second game, so that was a little bit of an advantage if we needed, but we looked at that first game as the championship game and were willing to use whoever we needed to win that game.”

Cretin-Derham Hall’s odds grew longer after the Ponies jumped in front 1-0 in the bottom of the first on a ground-out by Zurn. Alex Ritzer singled and Kade Peloquin doubled to put runners on second and third for Zurn.

Then in the third, Stillwater pushed two more runs across on two-out single up the middle by Casey Venske.

“That was a really big two-out hit,” Parker said.

Stillwater added two more runs sixth after loading the bases, with a walk, a bunt that was misplayed for an error, and pinch hitter Tanner Voight was hit by a pitch. Brayden Hellum lifted a sacrifice fly to score a run and Ritzer followed with an RBI single to provide a five-run cushion.

It was more than needed for Zurn, who was also a member of Stillwater’s state tournament teams in 2018 and 2019.

“This is Zurn’s third state tournament,” Parker said. “I don’t know if anybody else from Stillwater can claim that. I’m almost positive he’s the first one who can claim that.”

“They took a little bit of the drama away from it, but it just showed how well they played,” Parker said. “We struggled with the bats through the year and our pitching had to carry us, but our bats have picked up and guys are settling into their roles.”

After the 2020 season was canceled due to COVID-19, there were a lot of new faces getting their first taste of varsity competition this season.

“We went with a lot of seniors this year and I think our guys were a little more ready after last summer,” Parker said. “We found a way to get a lot of games in and our seniors gained a lot of experience last summer and having a lot of seniors gave us a big advantage because of the year missed. Our seniors had their sophomore season and summer season last year, so they had less catch up and I think that was the big key.”

He said the team’s work ethic has made a difference.

At Oak Park Heights, it was a busy day that was made even more festive after the Ponies topped rival Woodbury 7-3 in the winners bracket finals of the Section 4AAAA tournament on Saturday, June 5 at Stillwater Area High School.

The loss dropped the second-seeded Royals (16-8) into the losers bracket where they lost to Cretin-Derham Hall 7-5 in an elimination game on Tuesday, June 8.

It was a fun way to start the day for the Ponies, who raced off to join classmates for their graduation ceremony in the afternoon and the celebration continued during the grad party later that night.

“It’s a lot, it’s always a lot for the seniors this time of the year,” Ponies coach Mike Parker said. “We’ve had to leave games and change at CHS Field before so it’s always a little worrisome to play a game on graduation day. We spent the previous days practicing at 8 a.m. to be ready and I thought our guys were into it and the home field advantage was a huge deal for us. Woodbury is a very excitable team and they have a ton of enthusiasm at home.

“It was a big day for us. It was really fun to win and have them go enjoy their graduation, the ceremony and the parade and the all-night party. It was a pretty good day for them. Beating Woodbury for these guys, it’s a big deal because they know all the players and it’s such a good rivalry right now.”

Stillwater and Woodbury split their series in the regular season and the Ponies used a six-run fourth inning to take control in this one.

The Ponies struck first on an RBI double from Kade Peloquin in the third inning and started to pull away in the fourth.

“Getting that first run in, especially when you have (Gavin) Zurn and (Sam) Malik going, really gives you a lot more options to try and do things,” Parker said. “Guys are more patient at the plate because of it and I think that ended up being some of the reason for drawing some walks and fighting off some pitches. We were able to bunt and when you have a lead it opens up a lot of options.

“Especially in that kind of game, having the lead is huge. Especially with all the one-run games we’ve had, even though he is such a good pitcher, it gives you some confidence.”

Mason McCurdy and Casey Venske walked to start the fourth and Gavin Madison drove in both runs to provide a 3-0 lead. Ian Hanlon followed with another walk before Alex Ritzer reached on an error that pushed another run across for a four-run cushion.

Madison finished with two of Stillwater’s five hits in the game.

“He has struggled a little at the plate, but he’s been so good defensively all year,” Parker said. “We let him hit because we need his defense and for him to start hitting at the bottom of the lineup, he did a great job. He got two hits and Hanlon took two walks, that’s what allowed us to come up with a lot more runs in the postseason.”

Peloquin also drew a walk to load the bases and Zurn was hit by a pitch to push another run across. Ritzer then scored on a passed ball and Tony Ingram walked before Venske singled down the right-field line to increase the lead to 7-0.

As expected, Woodbury did not go quietly. The Royals scored three runs in the sixth before leaving the bases loaded and also loaded the bases again in the seventh.

“When we got those six, that was huge because we were able to shut Zurn down after 72 pitches when we were planning to use him the whole game and that helps set up the next game.

“I think that’s the deal we’ve seen with Woodbury over and over, there’s no safe lead. Every extra run ends up mattering. I think it’s the best baseball rivalry in the state. Every time we play there are multiple Division I players on the field and it’s going to be good baseball and neither team is going to give up.”

The Royals brought the potential tying run to the plate in the seventh. Zach Nelson was struggling with his control a bit and hit consecutive batters to load the bases and went 3-1 to the next batter before pulling off a bizarre conclusion to the game.

Nelson executed a successful pick-off throw that led to a rundown with third baseman Ian Hanlon tagging out the base runner for the final out of the game, setting off a wild celebration for the Ponies.

“That pick-off at the end of the game shows all the little things these guys have worked on all year,” Parker said. “Zach is a super quiet kid, but he’s got a great pick-off move to first and third. Zach’s move is that good.”

It was his fifth pick-off of the season.

“We had to basically try something,” Parker said. “We didn’t want to allow them to have more momentum.”