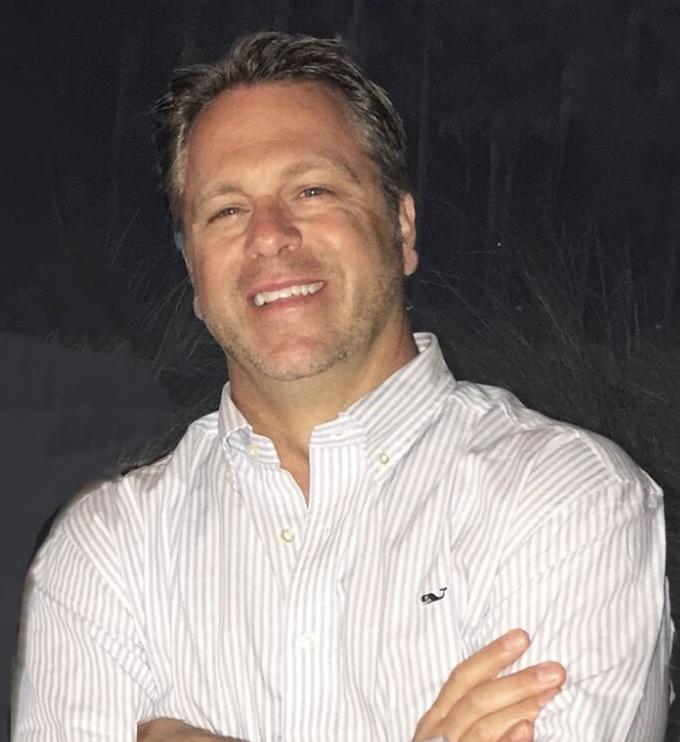 Robert Andringa, age 51, died peacefully at home on May 29, 2020 after a 2-½ year battle with colon cancer. Some would interpret it as losing his battle, but that would be an inaccurate description. He never lost a day. He lived big with cancer, and chose to enhance his relationship with his family and friends rather than retreat. It’s regrettable that this ugly disease took his life; however, he arrived in heaven with no regrets. His commitment to fun, living in the present, and not only attending parties but being the life of the party, buckled him in for an amazing ride these final years. Rob had no time for “Why me?”, as he was too busy spending his time living. With stage four cancer he made countless trips to Madison to visit friends, yuck it up at his favorite bar, Tavern 7, announce Badger hockey games, create lifelong friendships with his new Stillwater family, and celebrate his UW Badger hockey brothers at reunions. He travelled to Vail to ski in the winter, and coached The Bob Johnson hockey camp in the summer. Soccer tournaments all over the country with Dara, dance performances and dad’s weekend in Arizona with Carson, and the celebration of Jack’s 21st birthday in Vegas were not lost. He worked for a company he loved, and a career he loved at RBC Wealth Management until the very end. His golf clubs didn’t accumulate any dust either. He loved playing at our local club as well as taking his left handed game to some amazing courses throughout the country. By far the most meaningful was playing in the Cologuard Pro -Am in Tucson. Rob had the ability to light up any room, and consistently saw the good in people. His humility and kindness were inspiring, as was his ability to storytell, and impersonate people he loved. The Rob Malnory dance was a fan favorite, as well as his imitation of his wife’s cheerleading moves for the boys in the hockey locker room. A 1991 graduate of the University of Wisconsin - Madison, Rob loved his Badgers. He played both baseball and hockey at Wisconsin, and was a proud member of the 1990 championship team. Sports brought him so much joy from the very beginning to the very end of his life. The only thing that brought him higher joy was his family. He was a loving, patient husband, and an amazing father to his three children. They were everything to him. His intense love and humor were foundational. During the last few weeks of his life, Rob became very passionate about Wendy’s Frosty’s, Fruity Pebbles, and Lucky Charms. His wife Christi was a huge supporter of these choices (wink, wink). Up until the very end, he selflessly shared his humor, gratitude, and love. His physical presence is no longer, but he remains intensely in our minds and hearts. True love is forever. We love you, Rob. #ringostrong In lieu of flowers/gifts, the family wishes for donations to be made to a fund so they can continue to share his legacy, and support things that were important to him...like UW Athletics (hockey/soccer), University of Arizona Dance, Colon Cancer Research, and a few other things Rob loved. Receiving address: Andringa, 15020 37th St. N., Stillwater MN, 55082. An intimate catholic service will be held in Madison, as well as a public celebration of his life in Madison and Stillwater. Dates to be announced. Surviving relatives: Wife Christi, children Jack, Carson and Dara, parents Conrad and Phyllis Andringa, sister Sandy Meuer (Kelly), brother Jeff Andringa(Pam), sister Lisa McCarville (Todd), in-laws Dave and Marge Moore, brothers-in-law Michael Moore(Tatiana) Jeffrey Moore (Andrea) nieces Molly, Katy, Mckenna, Heidi, Tiziana, nephews Keegan, Casey, Jesse, Kevin, Kaedan, Jase, Jayden, Maxuel, tons of loving cousins and so many friends who he embraced as family.

Rob, Christi and family, I have followed your cancer journey. All of you have shown us how to live life with joy and grace.

thank you and please know I will continue to include the Andringa family in my daily prayers. Patricia Lee

Badger Nation and the world lost a great friend and leader in Rob. I knew him as the tag along little brother to Jeff and so proud of the impact he had on all.

My heartfelt condolences go out to all of the family.

Robbie you will be missed old friend. Rest in Peace and enjoy your walk in Heaven. Christi your prayers are with you and your children at this time. Know that you are all loved and so was Rob.