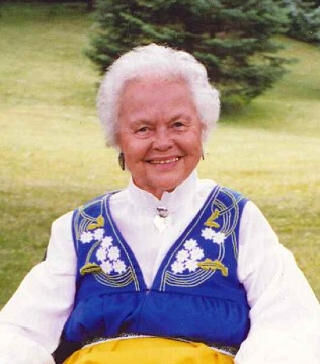 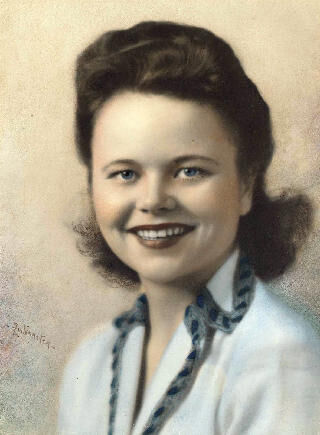 Born January 21, 1918 in the wheat country of Pomeroy, Washington, to Clyde and Augusta Carter. Following deaths of her father and brother, the young family of Mignon, Coral, Claire, LeRoy and Verle Victor was driven in a 1929 Model A Ford by Augusta to Willmar, MN, to live with relatives. At age 15, Mignon attended St. Cloud Teachers College. Upon graduation after 2 years, she taught in Svea with 30 students in grades 1-3 while she was only 17, managing to do so for 4 years. She attended Gustavus Adolphus College in 1941 in St. Peter, MN, with sister Coral. They thoroughly enjoyed GAC life, both meeting their husbands there. Mignon knew that Edsel Johnson was “The One” when she met him ice skating, eventually they were engaged. WWII had started so she followed him to US air corps bases. Married in June 1943, he was stationed at Saipan in the Pacific while she taught in St. Peter and Belle Plain. When Edsel returned from war, they lived in St. Paul where they began their family of 3 children. In 1955, they moved to Scandia, becoming members of Elim Lutheran Church and raising their family. Eventually they retired to a townhome in Lindstrom, finally moving to Parmly’s senior living facilities in Chisago City in 2010. Mignon was a teacher throughout her life. While raising kids, she finished her BA degree at St. Cloud State and then taught kindergarten in Marine-on-St. Croix, a job she adored for 23 years. During retirement, she found many other opportunities.... an avid bridge player, but to be assured she always had someone to play with, she taught the game to many. She guided tours for Gammelgarden Museum, as Scandia was designated the first Swedish settlement in Minnesota. She still missed children, so she guided class field trips at Rose Warner Nature Center. Always an active person.... golfing, cross country skiing, dancing with Edsel to big band music, fishing with family in northern Minnesota, hostessing bridge parties and walking outdoors until her last year, she even led exercises and taught bridge in her 90’s at Point Pleasant, an independent living facility. On April 23, 2021, Mignon died at 103, oldest of 7 kids, longest living member of her family and likely of generations before her. She is survived by her youngest brother, Vic (Jan) Carter of Delaware; sisters-in-law, Helen and Anita Carter. She was preceded in death by her husband, Edsel, who died in 2010 at age 91. Mignon’s descendants are children (spouses) Dianne Johnson (Gene Hallberg), Kristen Lindberg (Jim), Scott Johnson (Jan); grandchildren Jeff Lindberg, Becky Brunette, Angela Rassas, Jill King, Mackenzie Farrill and their spouses; 10 great-grandchildren; and the Hallberg clan. Although she donated Elim’s columbarium in Edsel’s honor after his death, she will be buried next to him in a cemetery plot. An outdoor graveside service will be held 2 p.m. Sunday, May 30th. The service will be recorded and a link will be posted at RobertsFamilyFH.com in the days following. All are welcome, please bring your own chairs. She requested memorials be given to Elim Lutheran Church or Gammelgarden Museum, both in Scandia, MN. The family would also like to thank the Parmly staff and Ecumen hospice for their loving care of Mignon during her last year.