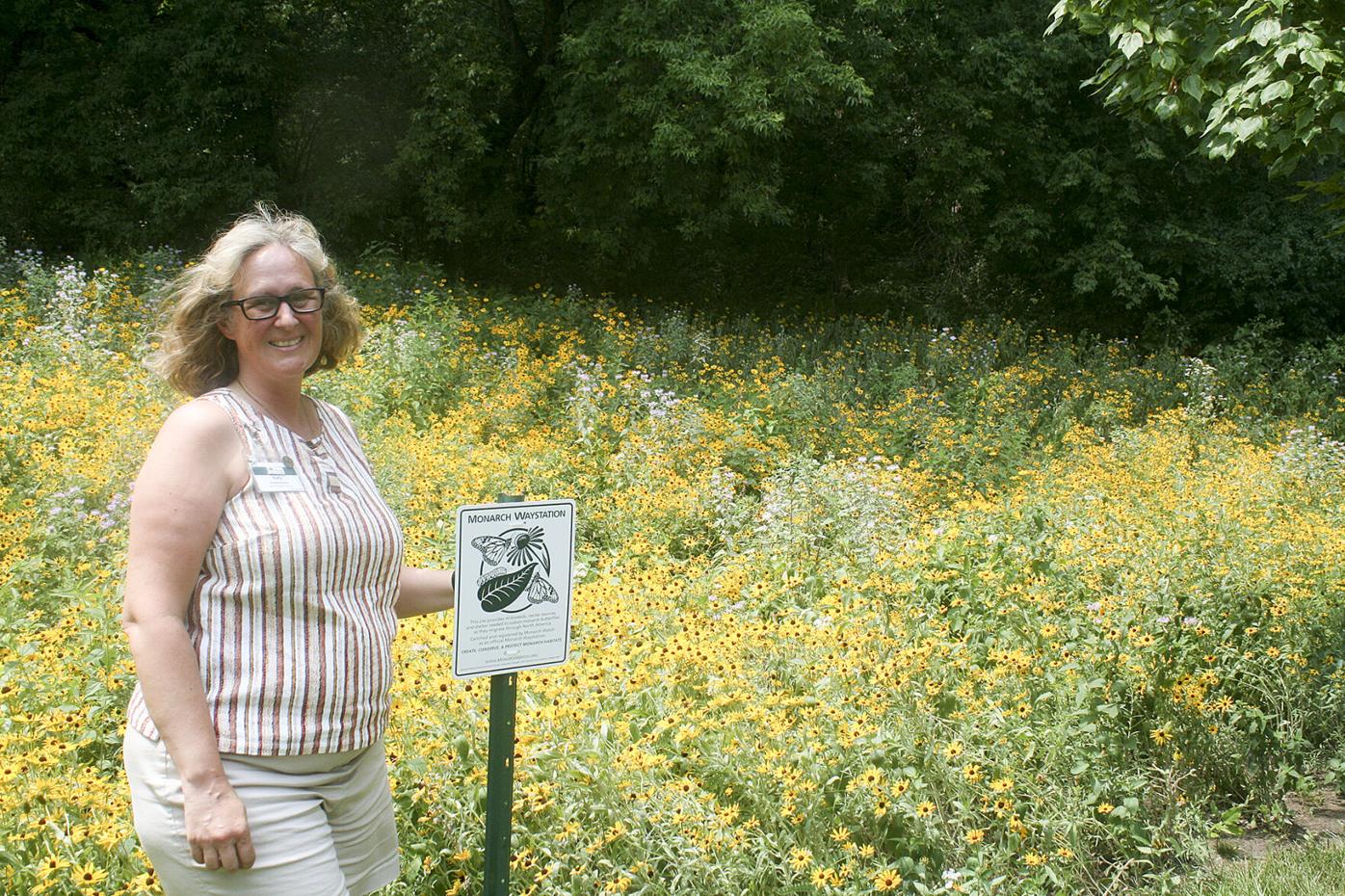 Kelly Bodensteiner stands next to the Monarch Waystation Croixdale at Croixdale Presbyterian Homes & Services senior living community in Bayport, one of thousands across the country. 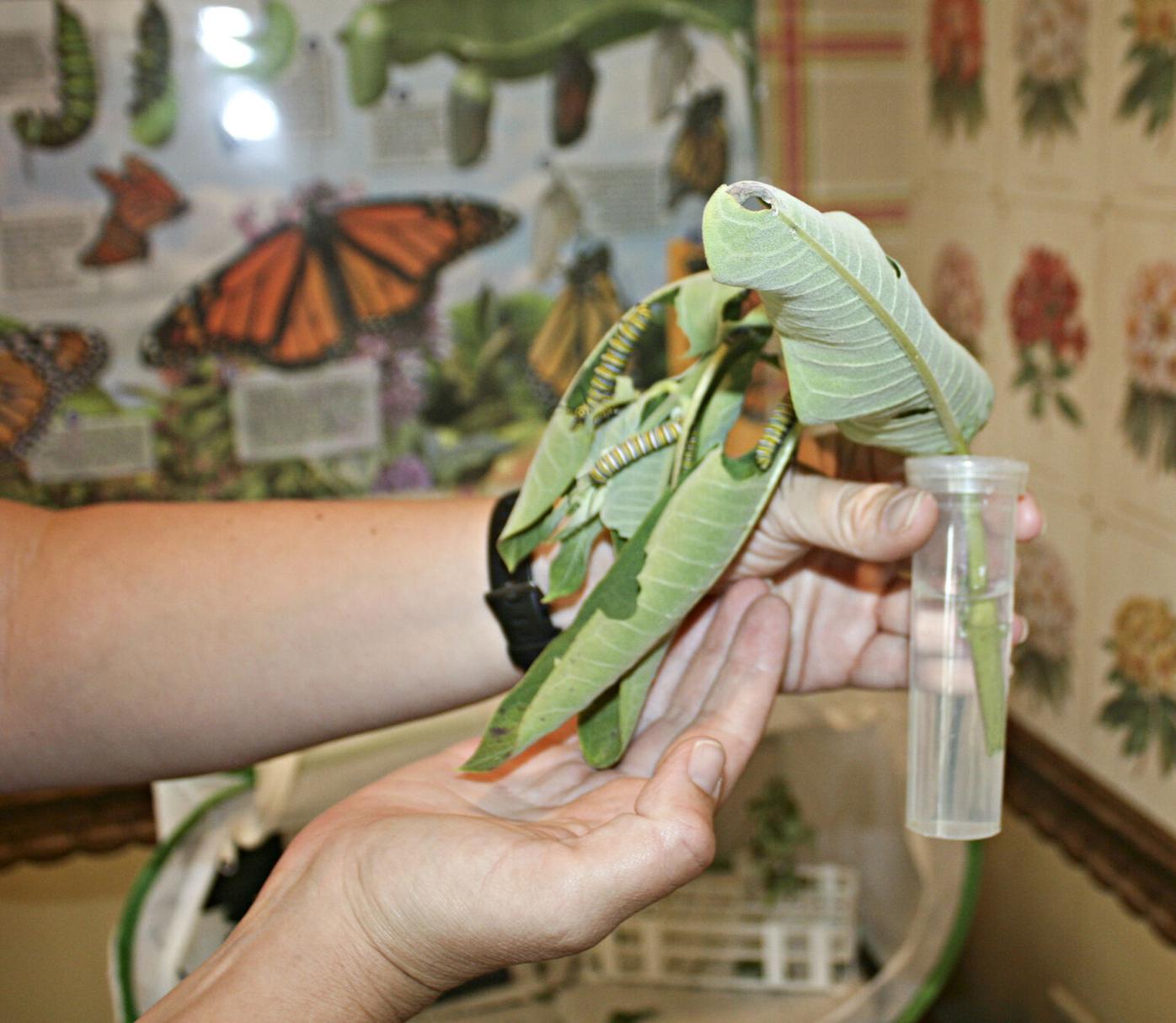 After the monarchs emerge from their chrysalises, they will be released into the wild.

Kelly Bodensteiner stands next to the Monarch Waystation Croixdale at Croixdale Presbyterian Homes & Services senior living community in Bayport, one of thousands across the country.

After the monarchs emerge from their chrysalises, they will be released into the wild.

Croixdale, a Presbyterian Homes & Services senior living community in Bayport, converted a third acre of its lawn into a native wildflower garden to help monarch butterfly populations flourish in the area.

The grounds of Croixdale are peaceful. There are hanging flower pots, a pond with a fountain, a gazebo, a vegetable garden, and perfectly tended green grass. It’s the type of grass with perfect crisscross lawn mower stripes, cut evenly, and no weeds. There’s a sharp contrast between this clean grass and the wild, tall grass in the native wildflower garden.

“This is our Monarch Waystation,” Kelly Bodensteiner, Croixdale’s Director of Life Enrichment, said, pointing to the patch of grass and wildflowers. “We call it our butterfly garden.”

Bodensteiner started the project two summers ago. The monarch conservatory is a project that residents have worked hard on and offers a way to give back to the community. Monarchs and other pollinators are hugely important to the ecosystem, but pollinator-friendly environments are becoming increasingly difficult to find.

“You can see the number of pollinators flying around out here,” Bodensteiner said. The butterfly garden is rich with butterflies, dragonflies, bees, and other winged creatures. “That doesn’t happen over grass.”

Caring for monarchs has been a hobby of Bodensteiner’s for years. It started with finding one monarch egg and putting it on her reception desk at work. Soon it was two monarch eggs, and the work multiplied from there.

When she started working at Croixdale in 2019, she decided to go all-in. The process was intensive, starting with burning and removing a large plot of manicured grass. The empty patch of dirt was unsightly, but the residents were eager to help get the garden up and running. Local community members reached out to donate seeds, monarch eggs and supplies. Everyone worked together to create a biodiverse garden with seven types of grass and thirty-seven varieties of forb plants for pollinators to thrive.

The following summer, during the 2020 pandemic lockdown, the real work began. Residents and staff would look for tiny monarch eggs on milkweed plants and then bring them inside to care for them.

Throughout the hatching process, residents studied the eggs with microscopes. When the caterpillars were big enough, they were put into a small habitat to grow and eventually form a chrysalis, then emerge as magnificent orange monarch butterflies. At this stage, they were released back into the wild.

Last year, Croixdale released 180 monarchs. This year, they have already released more than 65 – a modest but hopeful step in helping reverse the decline of monarch populations.

In addition to helping monarchs repopulate, the garden profoundly increases the quality of life at Croixdale. The ability to nurture living things and see them grow is incredibly fulfilling.

“We had a resident here last summer – she was a widow,” Bodensteiner said, “and she told me at one point that she was kind of ready to die, and the only thing she had to live for was the monarchs.”

The Monarch Waystation has also affected the spiritual life of the residents and is woven into their faith traditions.

When the butterflies are released, they often name it after a loved one who died and pray over the butterfly. It’s a symbolic reminder of the mysteriousness of new life.

A pastor, inspired by the monarch project, once used the butterfly’s lifecycle as a framework to help people process the death of a loved one during a funeral.

“When a caterpillar makes its chrysalis,” Bodensteiner said, recounting the words of the pastor, “it doesn’t know that on the other side when it comes out . . . it’s going to have the glory of a new life with wings and kind of an angelic future. And it’s the same thing with humans. When we pass, we don’t really know what awaits us on the other side.”

Since the start of the project, Bodensteiner has had speaking engagements to educate people about sustainable landscaping and pollinators. It’s her goal to change the way people think about the environment.

“If everybody could do a little bit of this to their yard,” she said, “we’d be bringing our nation back to a place where we’re more sustainable.”

Bodensteiner recommends simple steps to create safe places for pollinators and other wildlife, such as not spraying yards with weed killers and letting wildflowers grow. The residents have also been packaging milkweed seeds to distribute to community members.

Croixdale residents are looking forward to releasing more monarch butterflies in the future and spreading awareness of just how important they are.