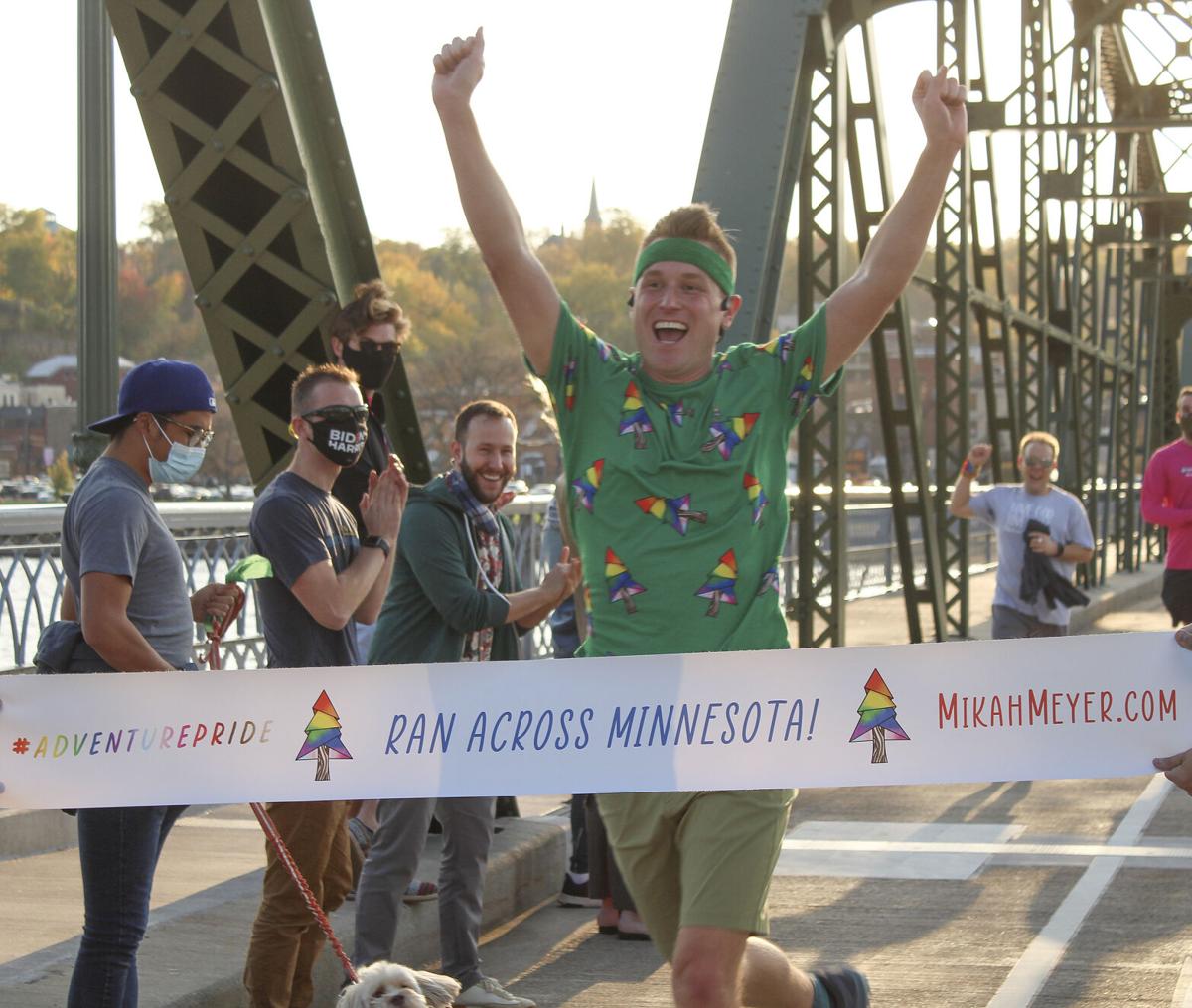 Mikah Meyer completes a 210-mile run across the state of Minnesota on Sunday, Oct. 11, on the historic lift bridge in Stillwater. 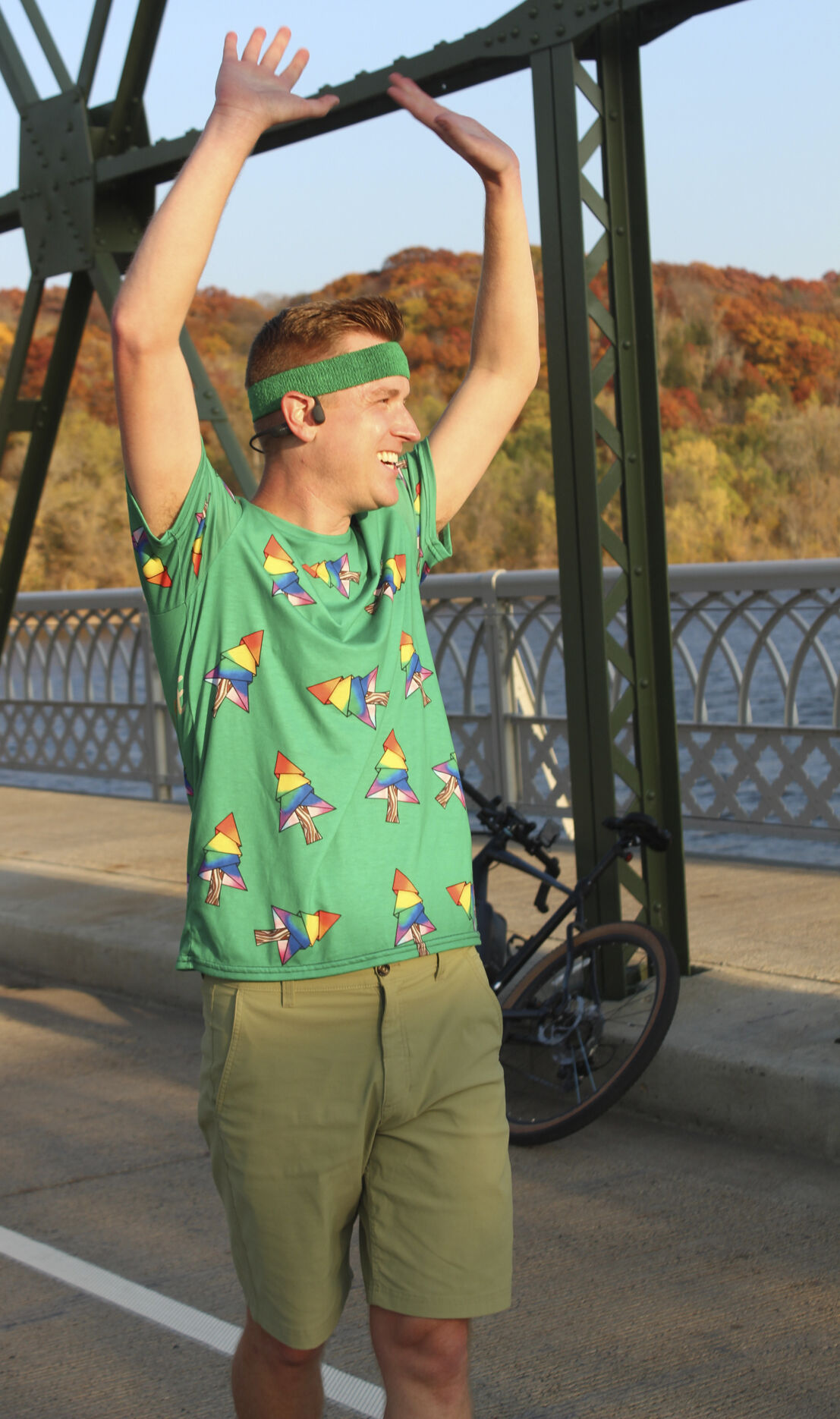 Mikah Meyer celebrates on the Stillwater Historic Lift bridge after completing at 210-mile, 38-day run across the state of Minnesota.

Mikah Meyer completes a 210-mile run across the state of Minnesota on Sunday, Oct. 11, on the historic lift bridge in Stillwater.

Mikah Meyer celebrates on the Stillwater Historic Lift bridge after completing at 210-mile, 38-day run across the state of Minnesota.

As the sun was setting over the historic lift bridge in Stillwater on a clear cool evening, Minneapolis resident Mikah Meyer broke the finish line tape crossing into Wisconsin completing his 210-mile, 38 day run across the state on Sunday Oct. 11.

The long-distance runner threw both arms high in the air as he crossed the finish line entering Wisconsin on the bridge.

“I ordered this weather 38 days ago when I started this at the South Dakota border,” Meyer told a small crowd of supporters on the bridge moments after finishing.

Meyer, who is an openly gay man, ended his cross country journey on National Coming Out day. Meyer used his run to bring attention to gay rights and launched an outside safe spaces campaign.

The outside safe spaces campaign encourages outdoor enthusiasts supportive of the LGBTQA community wear a rainbow colored tree on their shirts, backpacks, or put a sticker on their water bottles.

“As a way to nonverbally communicate to LGBT people they’re welcome in these outdoor spaces where typically you don’t feel as safe as these urban bubbles,” Meyer said.

Meyer wore one of these pins on his shirt throughout the journey.

attention to the causes he cares about. His business card lists him as a LGBTQ consultant

Meyer holds the world record as the first person to visit all 419 National Park Service sites in a nonstop journey. While that took a full three years, his run only took a little more than a month.

Meyer shared his journey on Twitter and Instagram as a way to help provide some entertainment during the coronavirus pandemic.

“I wanted to do something during the pandemic to sort of inspire people,” Meyer told the Gazette. “We’re all just sitting on our phone watching Netflix. So I wanted to give Minnesotans something live that they could follow and inspire them.”

He also wanted show state residents when times get tough, there are ways to adapt.

During his more than 200-mile journey across the state, Meyer lived in a Winnebago, and had the help of 11 support people. A few of them sped ahead of Meyer on a bicycle to capture photos of him along the way.

“So we could share this adventure and the beauty of Minnesota with the world,” Meyer said.

Because he traversed the state on foot, Meyer really got to see what Minnesota was like from the ground.

“At first, it was a lot of corn and soybeans to start to be honest,” Meyer said, “But really beautiful moments of meeting people and talking with them.”

He discussed the current political climate along the way with of few of those individuals.

Meyer met a manager of a Dairy Queen in Dawson, and she asked about what his rainbow pride shirt meant. He explained, but she wasn’t all that receptive to his message — at first.

“She goes ‘I don’t get all that Black Lives Matter stuff — I don’t understand — I’m not like the people in the cities,’” Meyer said. “But then she told me her daughter has special needs, and (her daughter) gets made fun of when they go out to parks.”

She then realized what Meyer may feel like from him being different.

“It’s important for me to do these epic adventures to show straight people who have stereotypes that we’re not all flimsy and not athletic, and to show young gay kids that they have a future doing whatever they want,” Meyer said.

“We agree with you it’s not just LGBTQ people,” Hagstrom noted. “We want to make outside spaces safe for all people who identify as ‘other.’ We all have something that makes us an ‘other.’”

Hagstrom is a gay man, but noted that the outdoor safe spaces initiate goes beyond the LGBTQ community.

As for the run itself, Hagstrom enjoyed the beautiful clear day.

“It was amazing, he joked that he ordered this weather in advance,” Hagstrom said, “but it really does seem that way.”

Meyer has his eyes set on running across another state, but this time in the Deep South: Mississippi.

As for choosing the location to end his latest epic journey, there were only two appropriate choices: Hudson, Wisconsin, or conclude the trip on Stillwater’s Historic Lift Bridge. The bridge opened to pedestrian traffic on June 1.

“There was no competition especially with this newly reopened bridge,” Meyer said. “This is the quintessential Minnesota river town, so how could I not.”