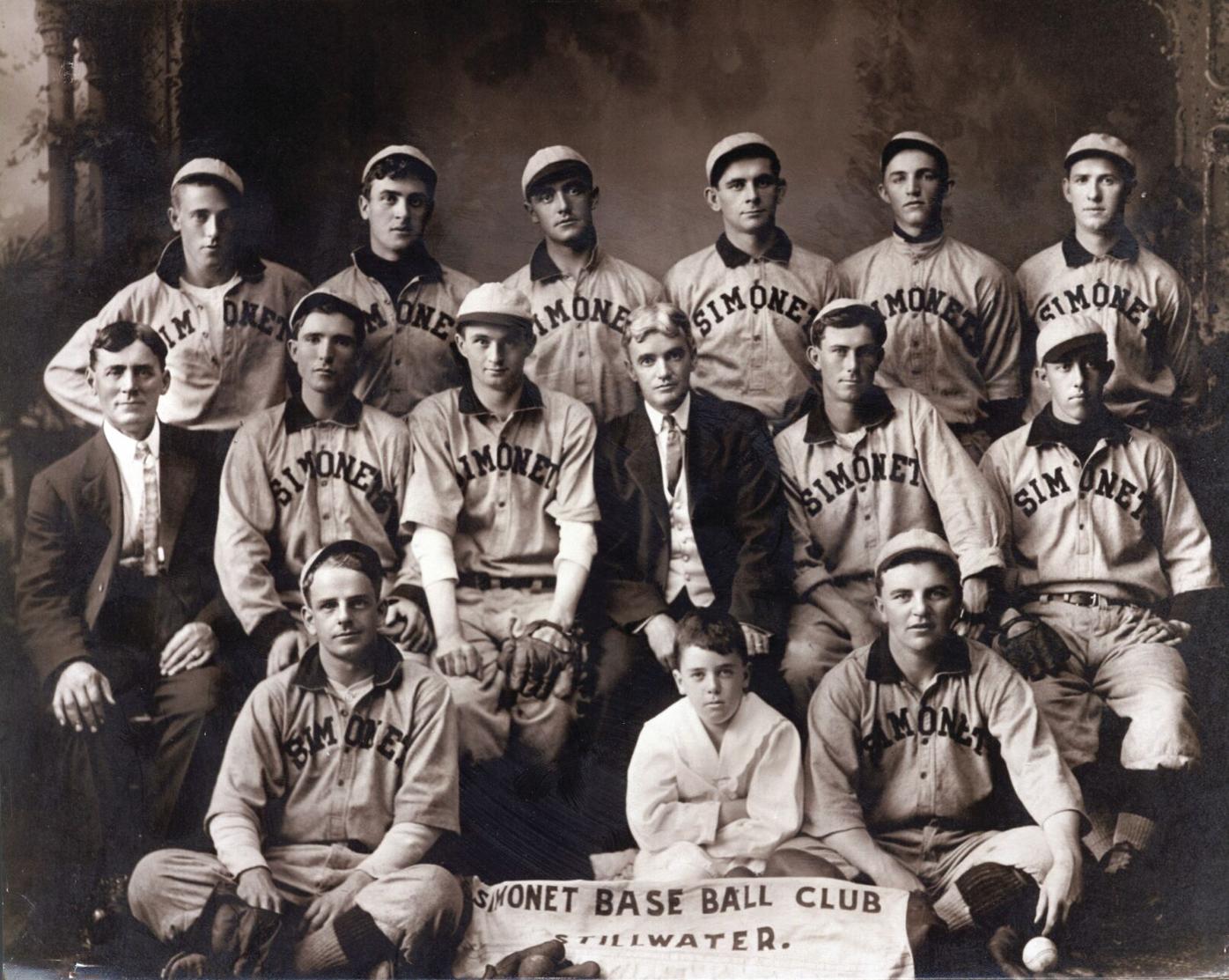 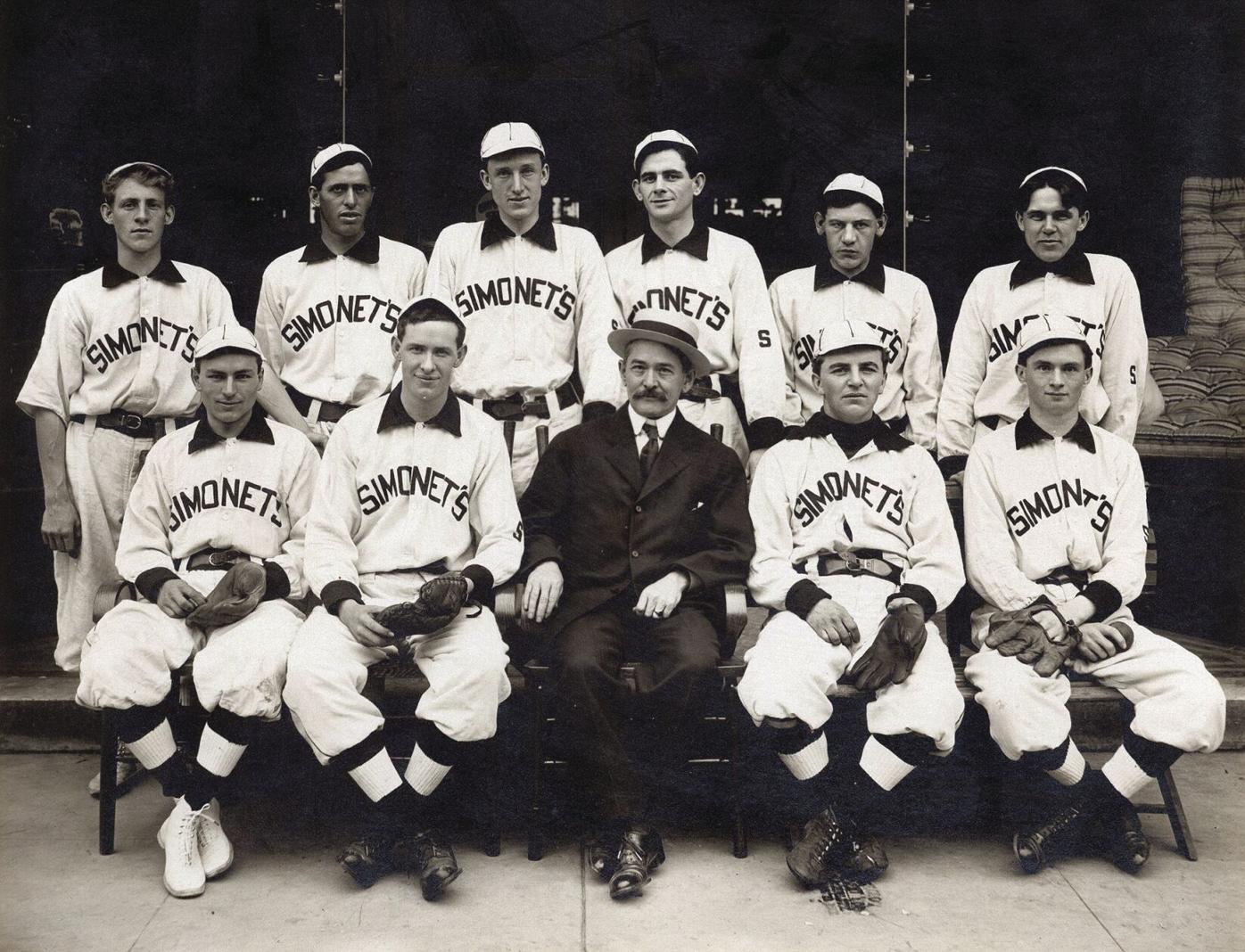 Time has come; the snow is gone; basketball season is nearly half over and the call of “play ball” is ringing throughout the valley. The National Pastime is alive and well in the St. Croix Valley as it has been for nearly a century and a half. This year, like all years, we root for the local teams to win and hope to see our major league team in the World Series.

Baseball in Stillwater has seen its joy and sadness. Many clubs were sponsored by local businesses and played other clubs in Washington County and the Twin Cities.

The Simonet Baseball Club was sponsored by the Simonet Furniture Company. In the April 8, 1911, Stillwater Messenger there was a notice about the club. It said that “an exclusively Stillwater aggregation of ball players will amuse the fans of this neighborhood just as soon as the weather permits. New suits have been ordered, the grounds and grand stand will be improved and a harmonious and successful season for the club is anticipated.”

According to the Stillwater Gazette, the Simonets uniforms had been ordered and were to be “of pear gray with maroon trimmings. The stockings will be gray and red, the caps gray with red stripes. The uniform is of the Philadelphia style.”

By mid April the Simonets were hard at practice and more than 100 spectators turned out just to watch the team go through their drills. Joseph Eichten had a chance to catch on with the club as a pitcher, and as he had played the previous couple of years with the Wanda club, he was a welcomed addition to the team.

The Stillwater Gazette pointed out that the Simonets “are not a hired team. There are no salary men in the squad. Each man is financially interested in the sport and will work his best to make the season a success. Manager Welch does not intend to hire any outside player. He believes Stillwater players are among the best of amateurs and the club secured is able to cope with the best of the independent teams in the Twin City and surrounding country.”

The Simonets first match came on Sunday, April 23, 1911. The home diamond had been rolled and was in fine shape and the grand stand had a new roof put on and the entire park was much improved.

There was a large crowd at the home park where the Simonets played the St. Paul Aquilas. According to the papers, the only error made by the local boys was a “sun ball” missed by outfielder Ernest Forceia. “Link” Swanman was on the mound for the Simonets and pitched well, “especially at critical times when he worked the strikeout trick with good effect.” Swanman also had “speed and assortment of curves.” The catcher was team Captain Ralph Borrowman. He had a strong arm behind the plate and with his “perfect throws to second base caught four base stealers and the crowd cheered him.”

In a game against the Majors of Minneapolis in 1912, the Simonet infield made all the put outs, not one out “made by the outer garden men.” The Simonets defeated the Majors that day 9 to 2.

The Simonets went on to win more games than it lost. The team played for several years until World War One took most of the available young men away to Europe. Today there are still clubs that play in the St. Croix Valley and on any given night, a person can hear a crack of a bat [or maybe a “ting” of an aluminum bat] and the crowd cheering.

It’s going to be a great summer of baseball because our team is going to win!