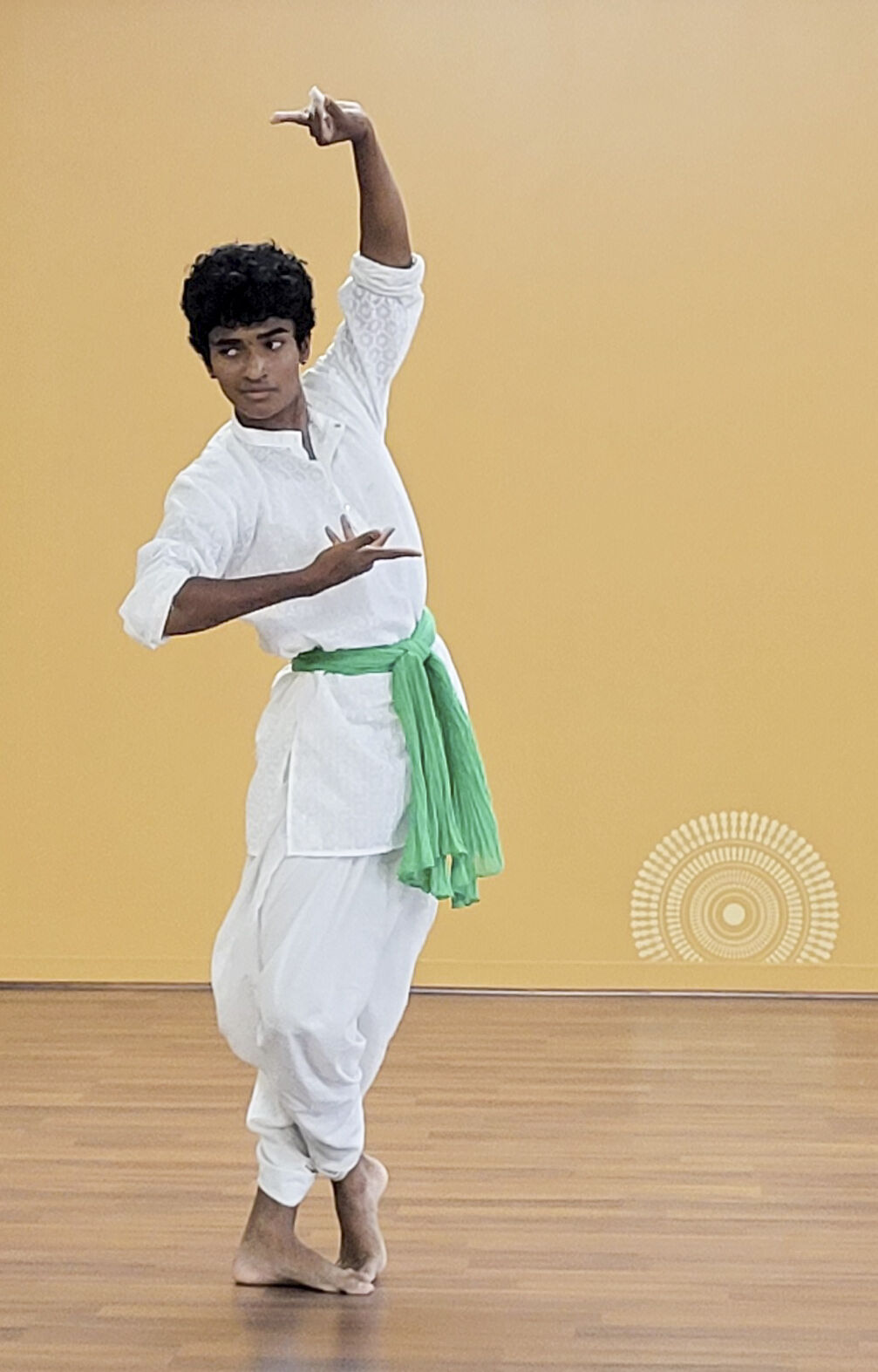 SAHS junior Arjun Acharya will perform as a soloist during the 2.5 hours of his arangetram at The Loft Stage next month. He has been training in the classical Indian dance of Bharatanatyam for almost nine years. 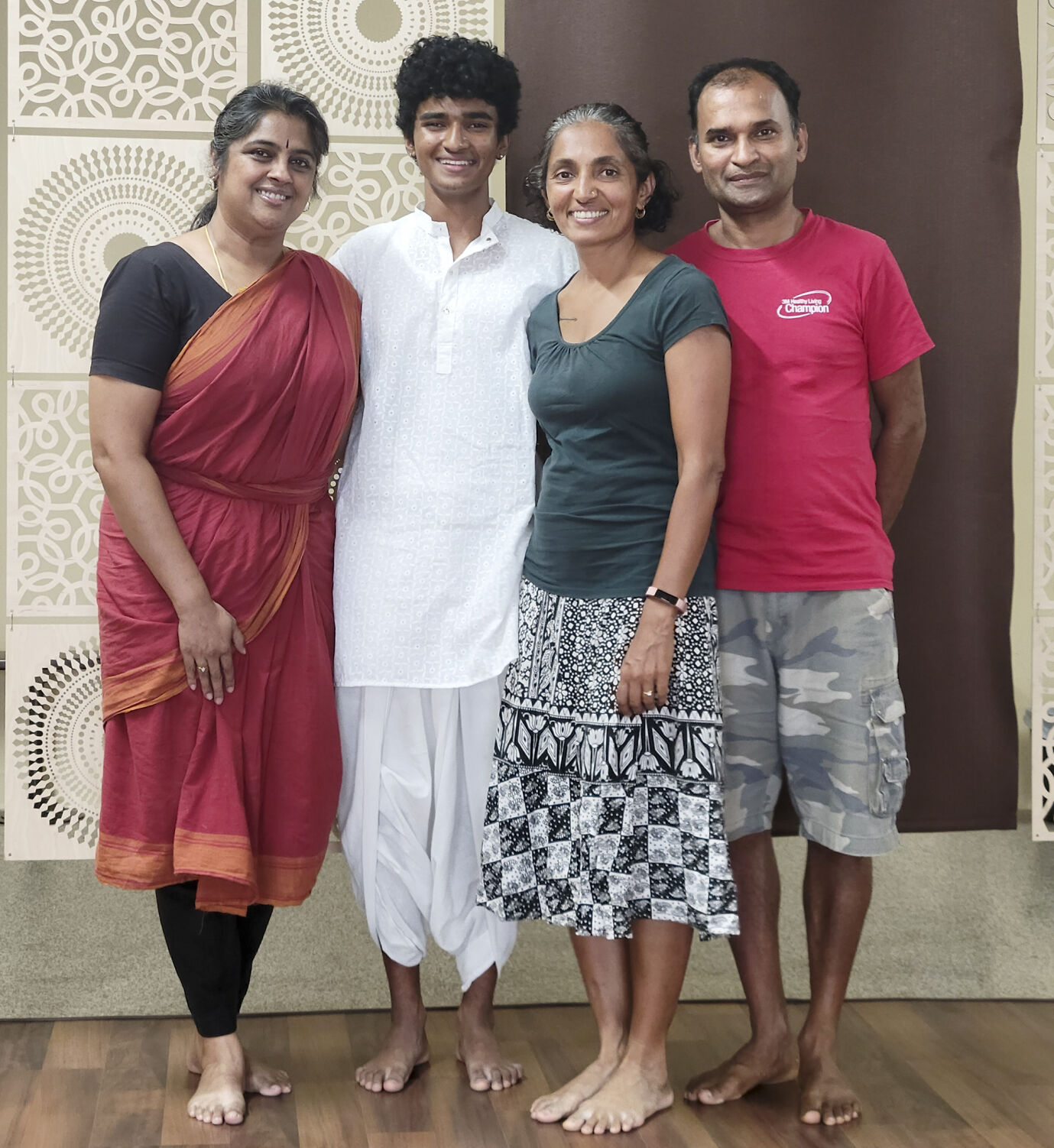 Arjun Acharya (second from left) has been his teacher’s, Suchitra Sairam’s (far left), only male student to take his training in Bharatanatyam to the level of arangetram. Also pictured are Arjun’s mother, Mangala, and father, Harish

SAHS junior Arjun Acharya will perform as a soloist during the 2.5 hours of his arangetram at The Loft Stage next month. He has been training in the classical Indian dance of Bharatanatyam for almost nine years.

Arjun Acharya (second from left) has been his teacher’s, Suchitra Sairam’s (far left), only male student to take his training in Bharatanatyam to the level of arangetram. Also pictured are Arjun’s mother, Mangala, and father, Harish

During the course of two and a half hours next month, the cumulative effort of nearly nine years of work—of technique, of form—will be distilled down to a single repertoire meant to encapsulate not just those years but also a tradition that goes back nearly a century and a mythos that goes back more than a millennium.

Acharya is performing his arangetram at East Ridge High School’s The Loft Stage in Woodbury the night of Sept. 18.

“It’s a big thing. It’s a one-time thing,” he says, admitting to a combination of nerves and excitement.

His mother, Mangala Acharya, says she hasn’t seen even two minutes of her son’s upcoming performance—she wants the final rendition to be the first time she sees it.

The arangetram is like a rite of passage in classical Indian dance, Suchitra Sairam explains, who has been Arjun’s teacher in the Bharatanatyam style all these years. “Arangetram,” derived from the Tamil and meaning “to ascend the stage,” is the first time that a student performs on stage as a soloist and displays what he or she’s learned.

The repertoire Acharya will dance next month is made up mostly of pieces that are 10 to 12 minutes long, although the central piece lasts for 30 minutes.

“Each of these pieces has a different focus, a different method of presentation, a different emphasis,” Sairam says. “The intention of the arangetram really is to showcase this dancer as able to handle this entire repertoire. And even beyond that, it’s really the launching point. It’s really intended to be the springboard from which you actually move forward (in classical Indian dance).”

Acharya has been training five hours each week in preparation for his arangetram, twice a week coming down to the Wycliff in St. Paul where Sairam has her studio, Kala Vandanam.

It’s much easier to practice the dance here, where a high ceiling and smooth hardwood offer a more ideal space than at home, Acharya says. Gauzy curtains filter sunlight through the large windows of the second floor studio, and Acharya, in draped white dhoti, dances a portion of the thilanna. It’s the last major piece he will perform during his arangetram.

Many of the stories told through Bharatanatyam originated in Hindu temples, but the dance isn’t worship so much as it is inspiration, Sairam says.

“That deep connection (to religion) is there, but not exclusively so,”

The emphasis is on the humanity of the characters portrayed, she says.

Pieces in the repertoire are choreographed to convey a feeling or story through emotive expression, gestures and technique; Bharatanatyam requires the dancer to truly embody the character of whichever story is being told, she says. Poetry, history, architecture—all of these might be the topic of any one piece.

The artistic heritage that has been inherited “is an immense, immense responsibility,” Sairam says, adding it’s “not in a fearful kind of way,” but in the desire to continue the work of past masters, present that work to new students and also contribute something new or personalized to that heritage. “Just like we have ancestry with our families, in our dance family we have ancestry.”

Bharatanatyam was something the musically-inclined Acharya says he took to at once. At about the same time he started at Sairam’s studio, he was also taking up lessons in the tabla, a South Indian drum, and the viola (he now plays in the SAHS orchestra).

“Music and dance are in his blood,” Mangala says, smiling. None of it was something Arjun had to be pushed to do; instead, he’d come home expounding on some part of age-old poetry that had been the basis for that day’s training at Kala Vandanam.

Acharya has danced on the stage before but not as a soloist. He and his sister performed a salangai pooja in 2017. That hour-long pooja, with typically a less difficult repertoire than the arangetram, is “an opportunity for (students) to take an intermediate step to learn how to develop yourself, develop enough stamina—mental, physical, emotional stamina—to dance by yourself,” Sairam says.

When Acharya ascends the stage this month, he will trade today’s white dhoti for a more formal saree, though he will drape that garment’s six yards of fabric just as did his dhoti. He’ll also wear the ankle bells he first wore during that salangai pooja four years ago.

And though he’ll be the only dancer on the stage, musicians will join him. Sairam herself is providing the nattuvangam (vocal percussion and hand cymbals), while Dallas’ Aditya Iswara will play the Mridangam, a two-headed South Indian drum. Atlanta’s Taniya Panda is coming in for vocals and Anand Krishnan, also coming in from Atlanta, will play the violin.

“It is an old tradition. There is a sacredness to it—not a religious sacredness, but a respect. You go through something like this, and you understand what you’re capable of and can then push farther,” Sairam says. “This is the point where we actually discover our relationship with the art and where we want to go with it.”

Arjun Acharya’s arangetram is on Saturday, Sept. 18 at East Ridge High School’s The Loft Stage (4200 Pioneer Drive, Woodbury). The arangetram is by invitation only, but Sairam has allowed that those interested in at-tending should email her at info@kalavandanam.com to receive the invitation as capacity and COVID precautions permit.