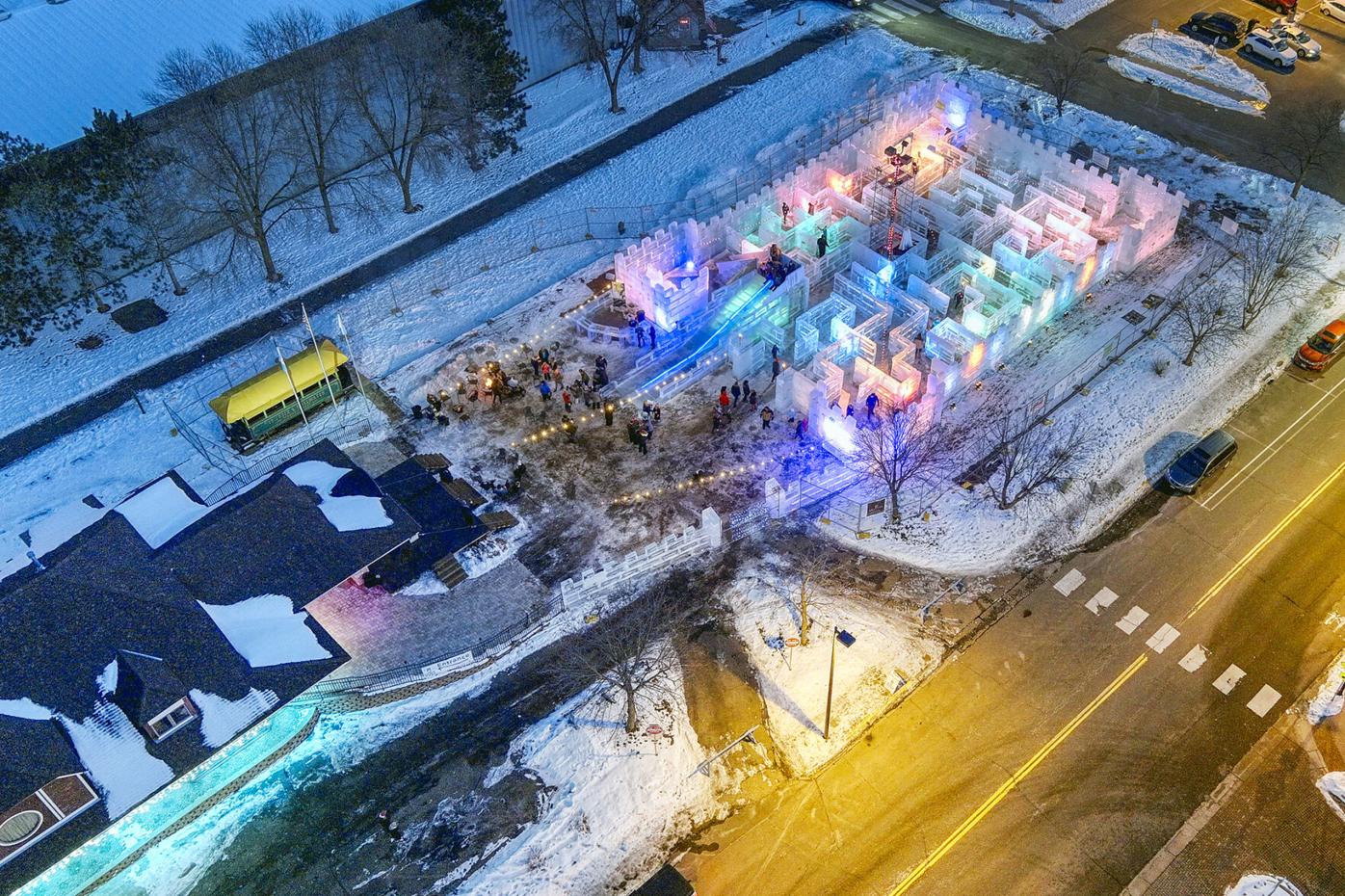 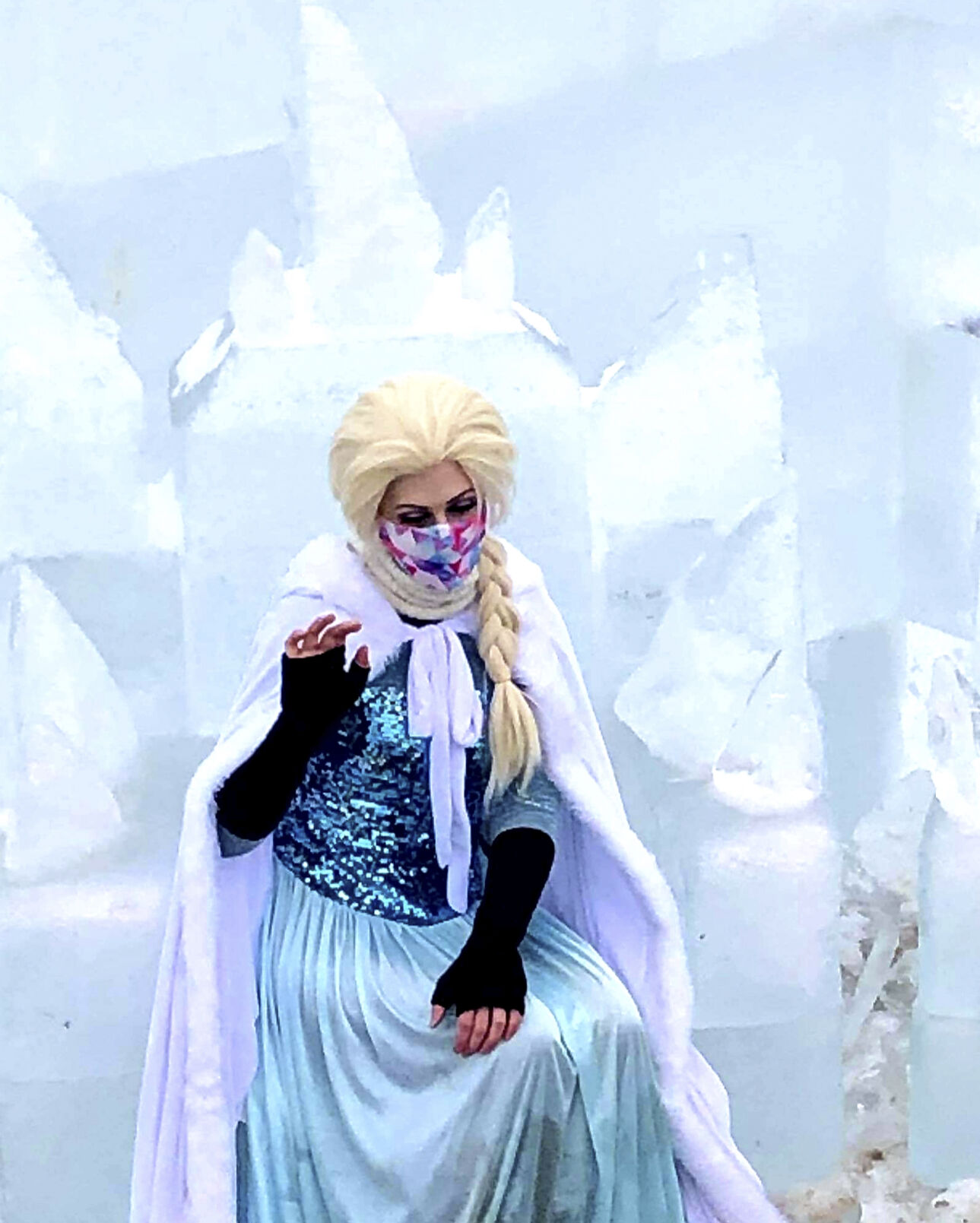 Elsa the Snow Queen (Jaclyn Mack) is ready to greet visitors at the Ice Palace MAZE.

Elsa the Snow Queen (Jaclyn Mack) is ready to greet visitors at the Ice Palace MAZE.

Elsa, the Snow Queen from “Frozen,” waves from her high perch in the center of the Zephyr Theatre’s Ice Palace MAZE. Little girls wandering among the icy walls are excited to talk and sing to her.

Even some adults stop to tell her how much they love the movie.

Jaclyn Mack, a Twin Cities creative artist, is one of three women portraying the popular Disney royalty at the maze most days. Costumed in her white cape and towering blond wig, the queen adds an element of magic to this winter attraction.

But the real magic, according to Mack and many others, was watching the maze take shape in only two weeks.

On Jan. 7, the first of more than 1,500 huge ice blocks were delivered to The Zephyr’s parking lot. By Jan. 22, opening night, an 8-foot-tall exterior ice wall, which mimicked fortresses of yore, surrounded a half-mile of ice maze.

In addition to the Snow Queen, three ice sculptures and two thrones were elements to “discover.” Twin ice slides made a thrilling and fast exit.

Noel Molloy, owner of Crafted Contracting, agreed to be general contractor for the maze. He had never worked with ice before, and the sheer size of the project, the height of the walls impressed him, he said.

So did getting it done on time, he laughed. “We were going hell for leather” to meet the deadline, Molloy said. He sent photos of the accomplishment to family in Chicago and his homeland of Ireland.

Equally impressed with the maze was Paul Larson, owner of Alchemy Sound and Vision. “Man, it was such a unique build and process,” he said.

Larson designed, supplied and installed the colored lights in downtown Stillwater. For the theatre’s maze, he hung 1,600 bulbs, each individually controlled by computer. His team was new to ice, too, and freezing eye bolts into ice to anchor the overhead strands of lights was a challenge.

Norm Tiedemann, a retired electrical engineer and now robotics tournament organizer, is nicknamed “The Everything Volunteer” by Calyssa Hall, the Zephyr’s executive director.

Tiedemann was onsite during much of the maze construction, watchful during the day and problem solving at night. He helped anchor lights to maze walls and now maintains the lights at night.

Another light man is Alan Frechtman, stage manager at the Fitzgerald Theater (during non-COVID days) and resident light designer for the Wayzata High School theater arts program. He works with Tiedeman to set up lights each day and then remove them at night.

Other men involved in maze maintenance include Pat Hammes, manager of the Old Sawmill Marina, and Blue Buettner, who was part of Molloy’s construction team and now helps keep the ice nice.

This duo draped a tarp to protect the ice walls on the sunny days and patched the walls when needed.

The enormity of the Ice Palace MAZE project impressed Hammes in the beginning. Now, it still does.