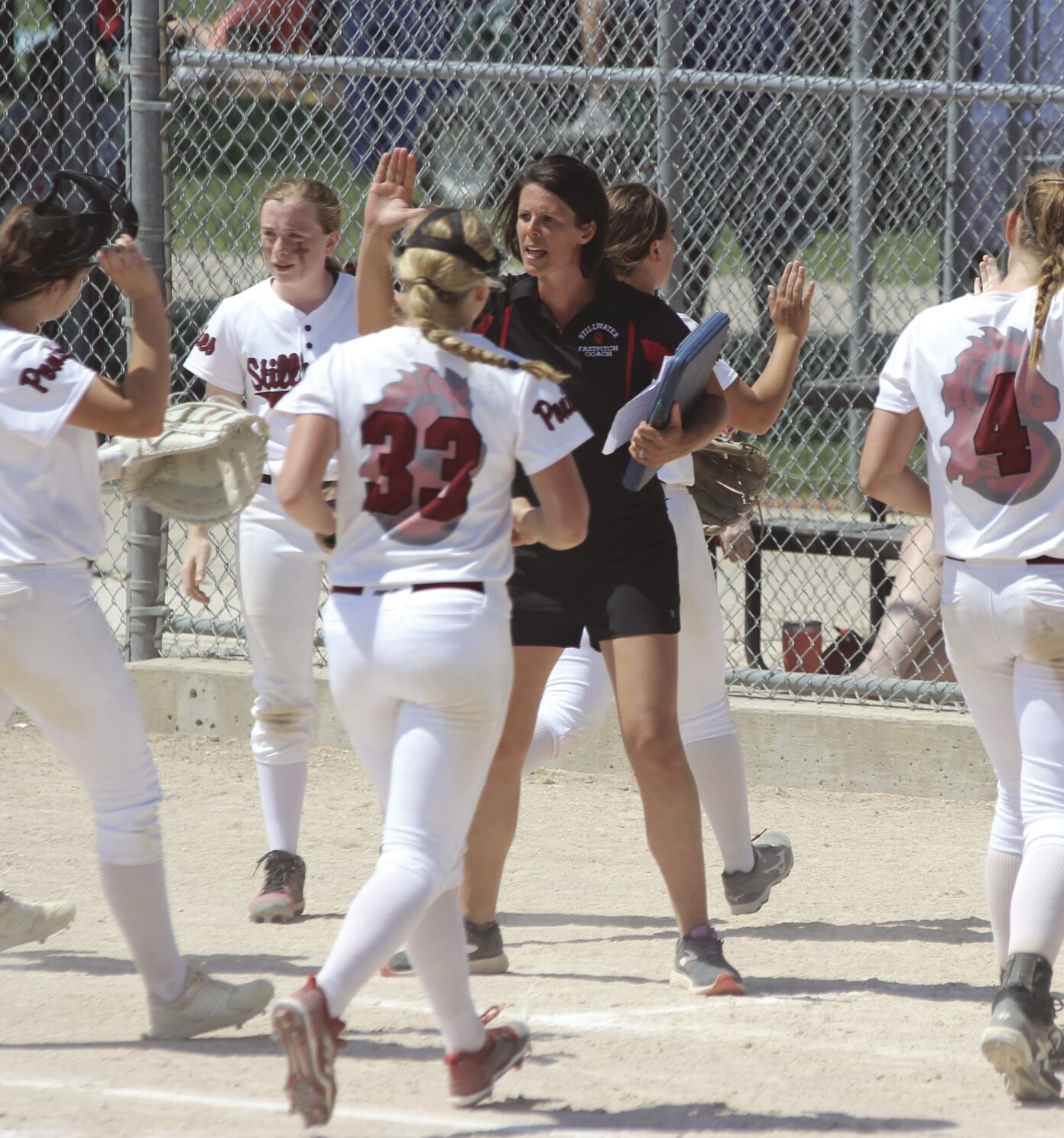 Angie Ryan, previously the head coach at Forest Lake and Centennial before joining the Ponies as an assistant in 2018, has been named Stillwater’s new head softball coach. (Gazette file photo by Stuart Groskreutz) 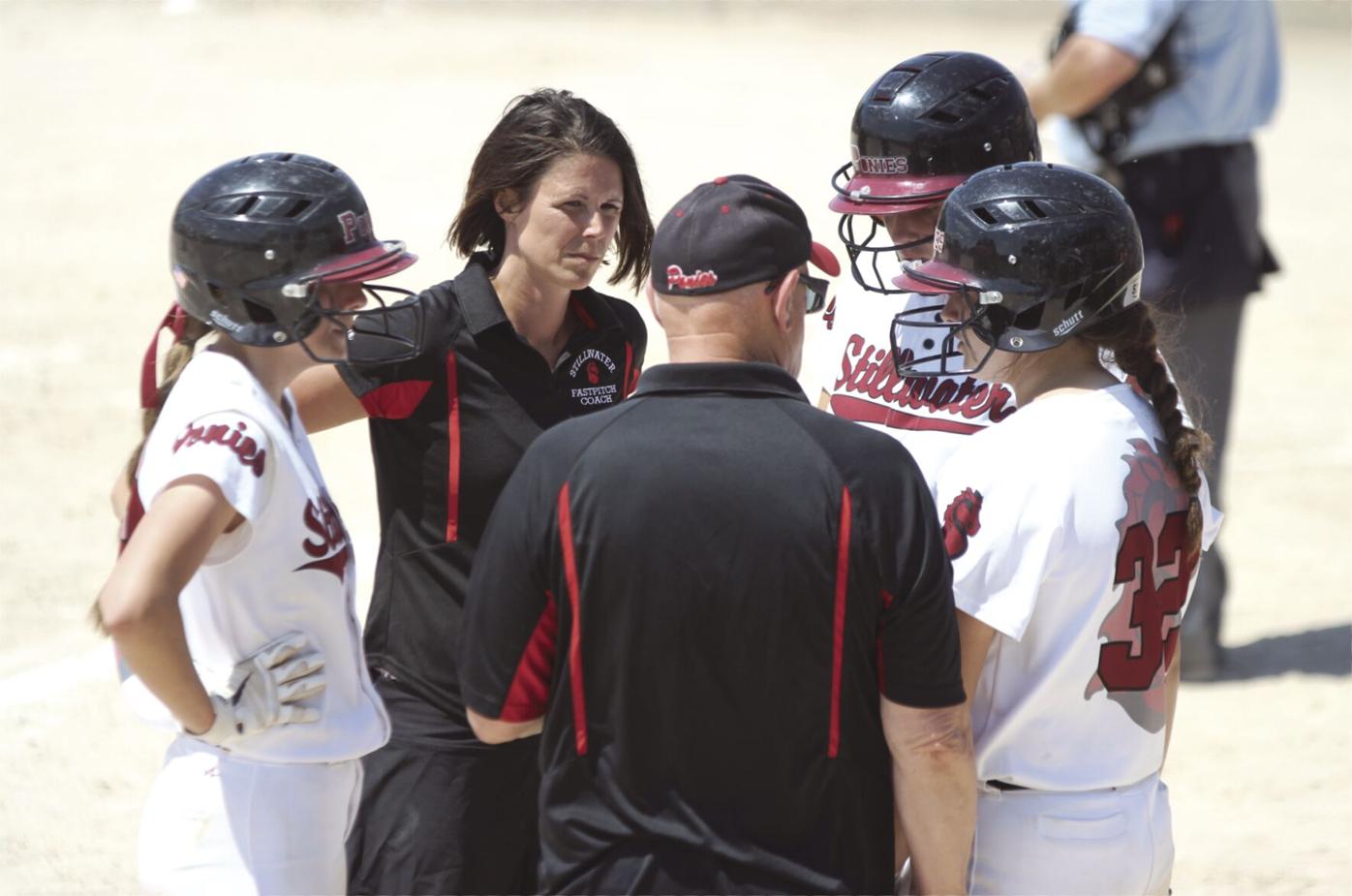 Prior to the cancellation of the 2020 season due to COVID-19, the Stillwater softball team won the Class AAAA state championship in 2018 and followed with a second-place showing in the 2019 state tournament.

Angie Ryan, previously the head coach at Forest Lake and Centennial before joining the Ponies as an assistant in 2018, has been named Stillwater’s new head softball coach. (Gazette file photo by Stuart Groskreutz)

Prior to the cancellation of the 2020 season due to COVID-19, the Stillwater softball team won the Class AAAA state championship in 2018 and followed with a second-place showing in the 2019 state tournament.

Angie Ryan was 22 years old and still finishing up her student teaching when she was hired as the head softball coach at her alma mater Forest Lake, a program that underwhelmed after she helped lead the Rangers to a state runner-up finish in 2000.

Starting in 2005, she built Forest Lake into a perennial state contender in her 11 seasons there, but she won’t be starting from scratch while taking over a Stillwater program that has advanced to the state finals each of the past two seasons.

“I’m really exited,” Ryan said. “There’s a lot of talent especially in the upperclassmen. Stillwater softball has been kind of a snowball rolling and I just need to continue to make sure it keeps rolling and using my experience to make sure everything is as sound as it can be. These kids are really talented and I just really want to make sure we’re creating a super positive environment for them and building strong team relationships. Everyone is super excited to get back on the field and be together. I want to help them build relationships that will last a lifetime.”

Ryan compiled a 183-93 record at Forest Lake with four conference titles and six consecutive section championships from 2008 to 2013. The Rangers finished second in the section in 2014 and 2015 and Ryan jumped at an opportunity to join the University of St. Thomas softball program as an assistant coach in 2016. She spent one season working with renowned Tommies coach John Tschida.

“I had two children of my own during that time and it was a lot to be a full-time teacher, a new mom of two young kids, and continuing to be a high school varsity coach, but I still wanted to learn and just kind of take a little less of a role,” Ryan said. “That was my thinking at the time.”

But she was still teaching in Forest Lake and driving to St. Paul to work with the Tommies, which also presented challenges, so she took over as head coach at Centennial in 2017. After that, she took a teaching job at Oak-Land Middle School in the Stillwater district and signed on as an assistant coach with Bob Beedle and the Ponies.

Beedle, who led the Ponies to two state titles in 15 seasons, announced his resignation this fall and Ryan was eager to take over. Stillwater Activities Director Ricky Michel was equally enthusiastic about turning over the reins to Ryan.

“We’re thrilled,” Michel said. “Finding female coaches has been difficult for us and we have a gem here, there’s no doubt about it. Angie Ryan is excellent. She had success at Forest Lake and comes with a great pedigree, we’re very fortunate. She’s going to be a phenomenal female role model to our female athletes.”

She also earned a strong endorsement from Beedle, whose respect began while coaching against her and only increased after two seasons on the Stillwater staff.

“Angie really knows the game of softball and really understands what we’re trying to do when teaching,” Beedle said. “She also gets the life lessons involved in sports, but really knows her softball and fundamentals and has a great track record of success. She took a program from the basement to the top and it stayed their the entire time she was there.”

She was Angie Berg while competing at Forest Lake and in college — and was also a three-year starting point guard in basketball for the Rangers — before playing every inning in four successful seasons at St. Cloud State University from 2001 to 2004. Stillwater had its own pipeline to the Huskies during that time and Ryan played on teams with former Ponies Cally Stewart, Megan Fuches and Jessie Preiner. Another former Ponies standout, Stacey Schoenrock, was an assistant coach for the Huskies in Ryan’s freshman season.

The Huskies finished third in the NCAA Division II National Tournament in 2004.

“I played with a lot Ponies softball players and I got to know all of them really well and we are all still really good friends,” Ryan said.

In addition to an outstanding playing career — she still ranks third on SCSU’s all-time list with 243 career hits — Ryan’s coaching has been influenced by each of her stops along the way.

“My experiences at St. Thomas really helped me a lot, just learning more about hitting and becoming a better teacher of hitting,” Ryan said. “I was able to bring that to Stillwater and Bob let me share and be a big part of the program.”

And with two seasons working with Beedle and the Stillwater program, Ryan is familiar with the players and the expectations.

“I think we have quite a few similarities,” Ryan said. “We both are very competitive and we both certainly want to win. Bob has run a tremendous program and I’ve learned a lot from him, too, in my time in the couple of seasons working directly with him.

“I had my way of doing things pretty established as a head coach for 11 years and an assistant for one at St. Thomas, then back to head coach and then assistant the past two seasons plus the COVID season. So what’s kind of hard for me, I thought I had the answers or something and then you see these other people (Tschida and Beedle) doing things very differently and yet they were really successful, too. It has given me more tools, more observations, and ways of doing things so it’s opened my eyes a bit to seeing other ways of doing things and also a little soul searching in that I have to reestablish my philosophy and how I want to go about it.”

When she joined the Stillwater program as an assistant, there was no expectation that it would eventually lead to moving into the head coaching spot.

“We did not have any sort of agreement or anything like that,” Ryan said. “He really let me contribute a lot to the team and share my voice and experience, but I didn’t know he was going to step down until he told us in early November.”

Ryan, who teaches health and physical education at SAHS, said there were several factors that came together and allowed her to take on the additional responsibilities that come with being a head coach again.

“Now that my kids are a little older I just feel more comfortable taking on a head coaching position and just being established as a teacher,” Ryan said. “The teacher part is a huge part of it because that’s our full-time job. The coaching part takes a lot of time an energy, but the teaching is your full-time job and it all has fallen into place the last few years. My own kids are older and I feel like I have a little more time.”

She also expects most of the remaining coaches to return this spring, including Amy Hoffman, Mike Meyer and Joe McQuillan. She’s hoping the participation numbers will allow for two ninth-grade teams.

Danielle Tschann, who played at St. Thomas when Ryan was coaching there, will also join the staff as an assistant this spring.

“I’m a really big culture person — and I know that’s a term and word that has been floated around a lot with college coaches — but to me that is huge. It’s probably the main focus that I will have,” Ryan said. “I really want to establish the most positive culture I can for these young women to grow and thrive and learn.”

Ryan’s first three seasons while rebuilding the Forest Lake program produced a combined 22-41 record. She expects to hit the ground running with the Ponies, whose five state championships are the most among the state’s largest schools.

Stillwater claimed three state championships under Mike Pavlovich (1995, 1996 and 1998) and two more under Beedle (2012 and 2018). Burnsville with three, is the only other large-school program with more than two state titles in softball.

“For a long time Stillwater softball is well known for being a very talented program and well established,” Ryan said. “A lot of the athletes who were part of 2018 and 2019 are still in the program, so we’re excited. I want to win the conference, the section, and the state tournament. We have tons of talent. These kids are extremely talented. It’s making sure everybody is pulling in the same direction throughout the season.”