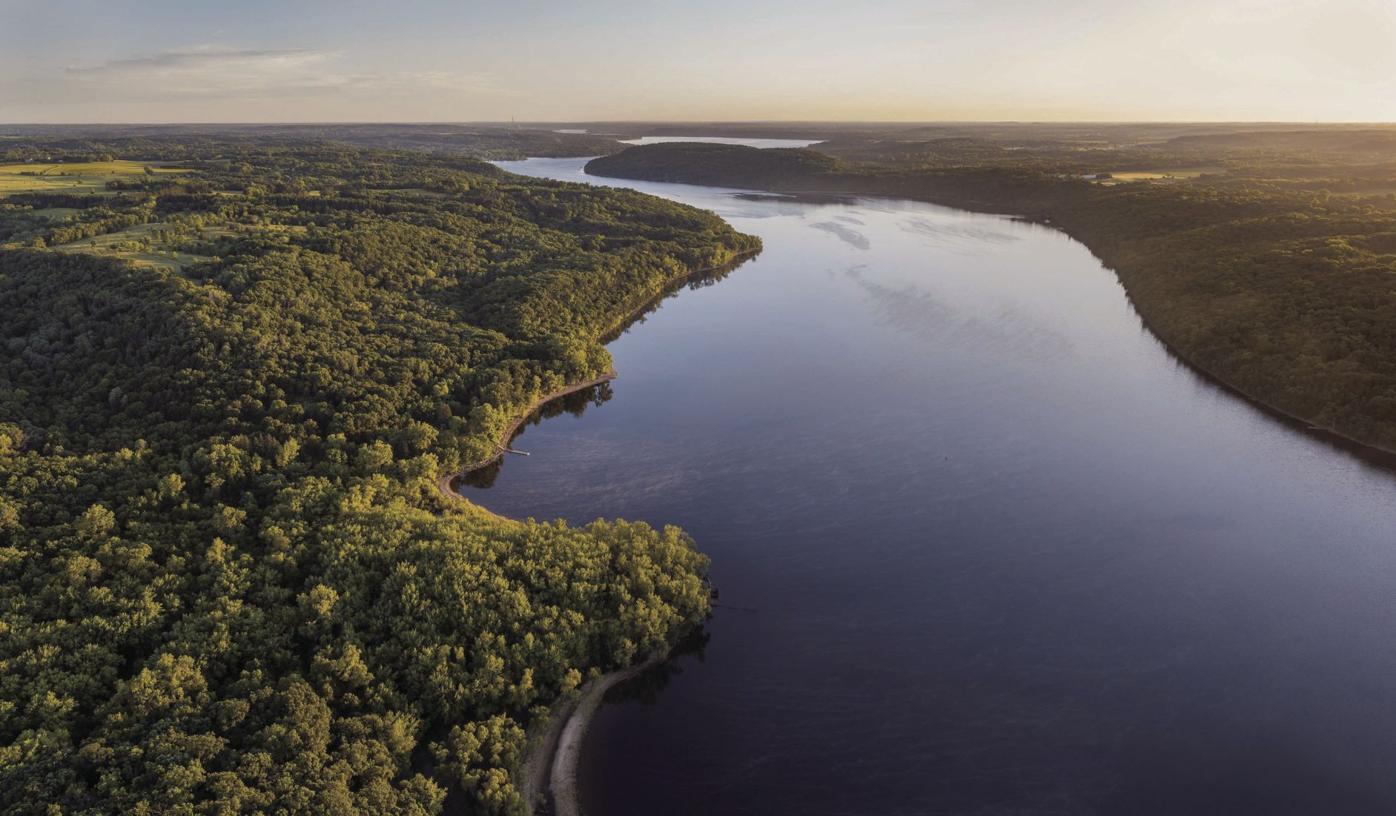 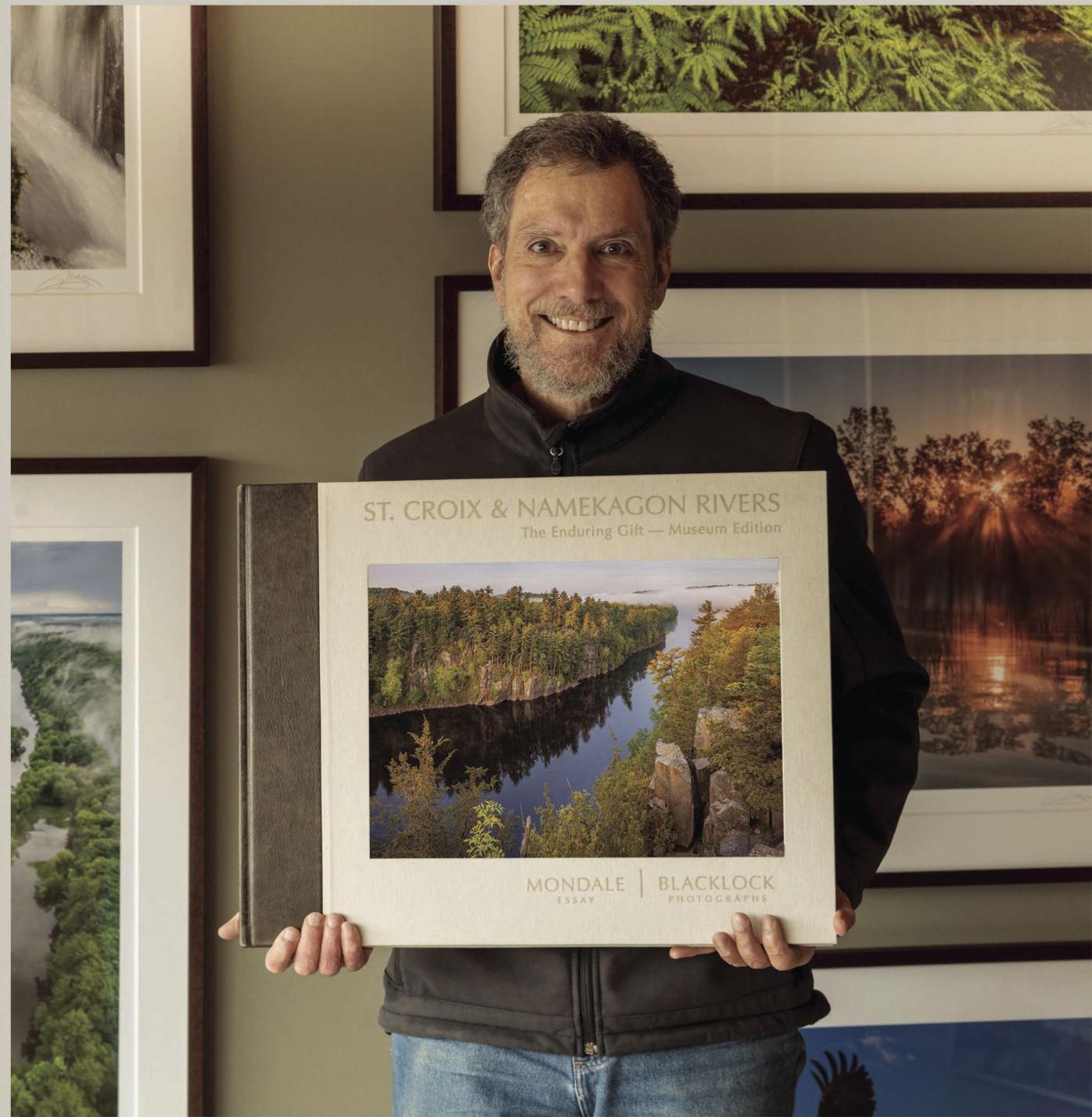 Blacklock poses with a copy of the museum edition of his book of photographs. (Submitted photo)

Blacklock poses with a copy of the museum edition of his book of photographs. (Submitted photo)

Since 2015, the award-winning photographer Craig Blacklock has quietly paddled the St. Croix River, snapping photographs for a special project released in April.

Although many kayakers have seen the river from water level, with the help of a friend who’s proficient in drone technology, Blacklock, widely known for his Lake Superior photographs, also sent a small camera lens skyward.

Blacklock scouted the bird’s eye views with Google Earth, locating the most visually intriguing river bends and islands. Drones, he said, are better for photographing than airplanes. They can hover mere feet from a cliffside.

“I was able to see the watershed as no one has seen it before,” Blacklock said.

Blacklock’s new book, “St. Croix and Namekagon Rivers — The Enduring Gift,” is part of the year-long celebration of the 50th Anniversary of the Wild and Scenic Rivers Act and created in partnership with the St. Croix River Association (SCRA).

It also includes a foreword by former Vice President Walter Mondale, a former Minnesota Senator and Attorney General who was integral in passing legislation to protect the St. Croix River.

Blacklock will sell and sign Collector’s copies at Watershed Cafe, 99 N. Cascade St. in Osceola, Wis., May 11-13, coinciding with the St. Croix Valley Pottery Tour. Blacklock will be on site 8 a.m. to 9 p.m. Friday and Saturday and 9 a.m. to 2 p.m. on Sunday. Museum and Signature Editions will be available for order.

Blacklock also has an appearance at Stillwater Public Library with a program and book signing on May 29 from 6:30-8 p.m. He said he will show videos with original music and live performance by Stillwater singer/songwriter Pete Mayer.

The photographs in the book span from the Namekagon River near Hayward, Wis. to the St. Croix river’s intersection with the Mississippi River at Prescott, Wis.

A portion of the profits will go to the SCRA’s ongoing land and water protection efforts. The SCRA and National Park Service also have access to the images for publicity and advocacy uses.

In fall 2014, Blacklock severely burnt his hands. As a result of the skin grafts that helped repair the damage, Blacklock’s hands became incredibly sensitive to cold.

In July 2015, Blacklock conducted an exploratory paddle trip with his wife and daughter, considering the St. Croix river’s views, wildlife and vegetation as well as identifying areas of photographic opportunity.

“I didn’t know if there’d be enough variety to pull a book together,” he said. “After that trip, I was enthralled by the idea.”

Shortly thereafter, Blacklock began working with the SCRA. The association gave him tips on where to go, ideas on important images to capture and they connected him with people who own land along the river, said SCRA Executive Director Deb Ryun.

“It’s beautiful. It turned out so well,” Ryun said of the book. “It meets people really at their heart. I think it really just captures the essence, the beauty that is the St. Croix River.”

For a photographer who made his career on the icy, wavy Lake Superior waters, Blacklock said the river provided unique challenges. He learned to make quick decisions about capturing a shot.

“The current is pretty fast,” Blacklock said. “I couldn’t hem or haw.”

As Blacklock became familiar with the St. Croix and Namekagon Rivers, he took notes on which areas to return to in a different season or time of day. “An Enduring Gift” includes several photographs of early morning fog rising from the river.

“We wanted to make sure we were in the best places at the best time of day,” he said.

The book is only available through the website, StCroixPhotography.com, at Blacklock’s galleries in Moose Lake and within Waters of Superior in Duluth’s Canal Park, as well as very few, select stores.

Blacklock said availability is limited because of the book’s high manufacturing costs. For example, manufacturing costs for the $90 Collector’s Edition were $35 each. If sold at a nationwide bookstore like Barnes and Noble, both the store and distributor take a cut of the selling price.

Blacklock said he decided to sell directly in order to keep the price low for consumers.