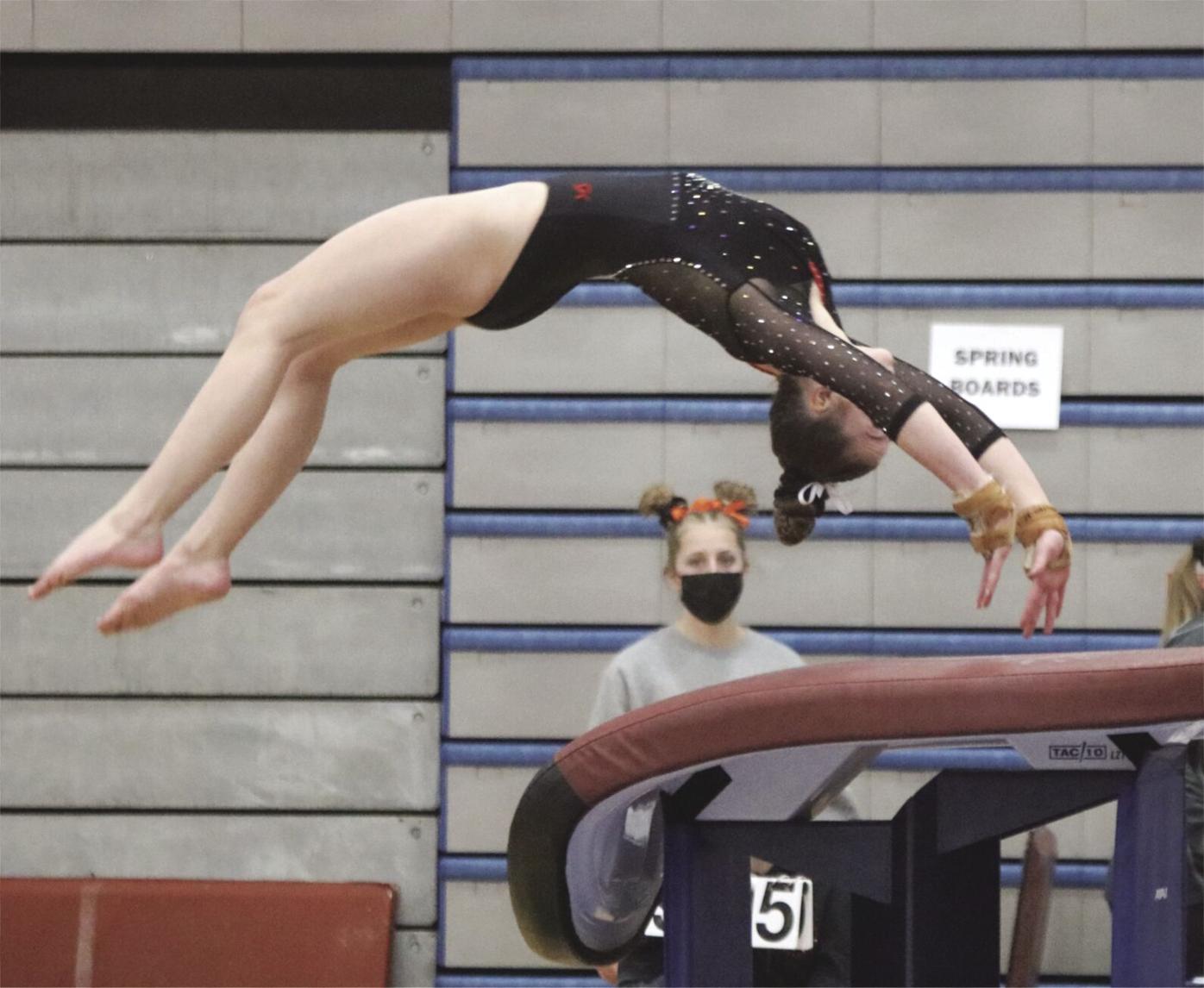 Katelyn McDowell competes in the vault for the Stillwater gymnastics team in the Class AA state meet on Saturday, March 27 at Champlin Park High School in Champlin. (Gazette staff photos by Stuart Groskreutz) 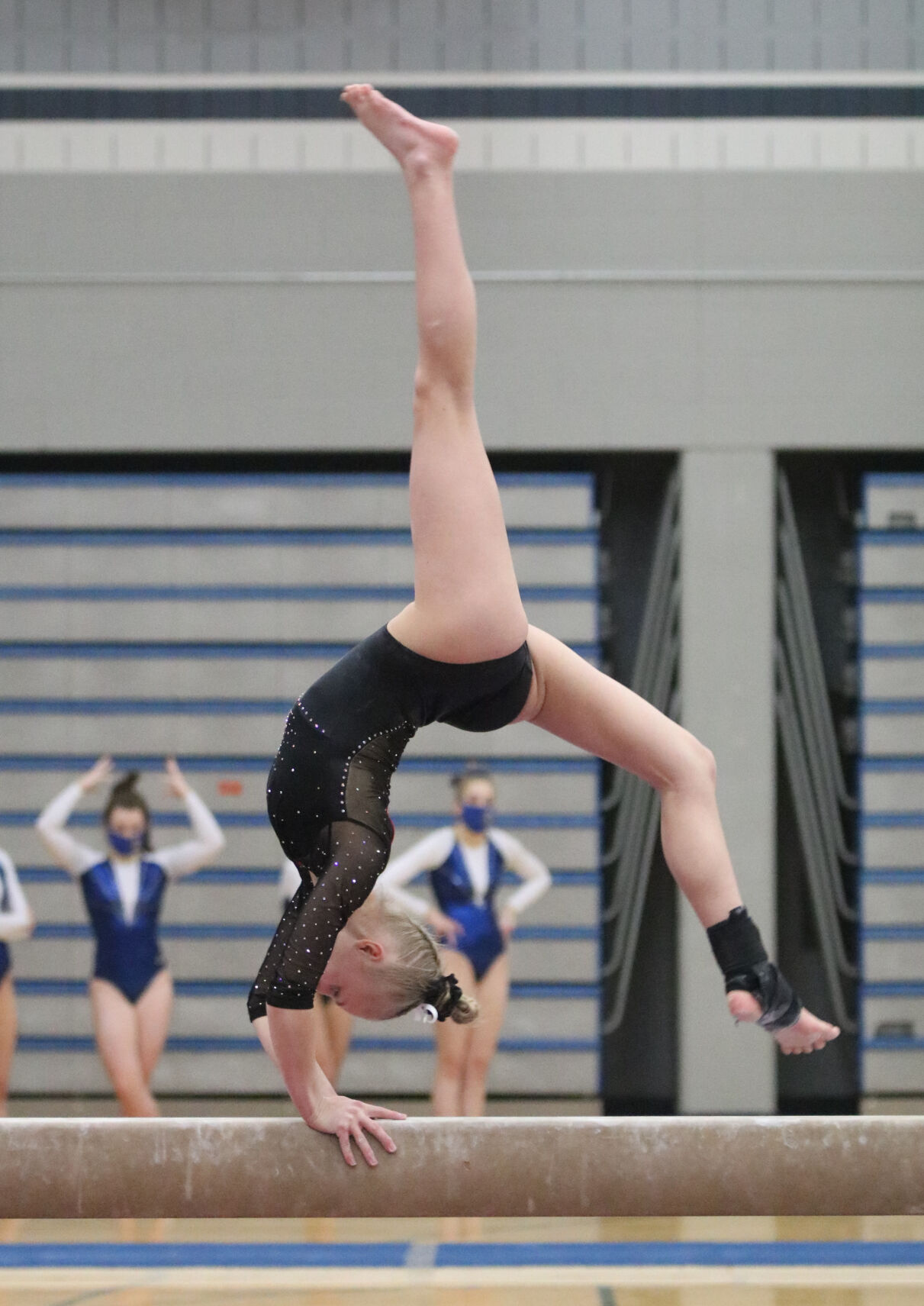 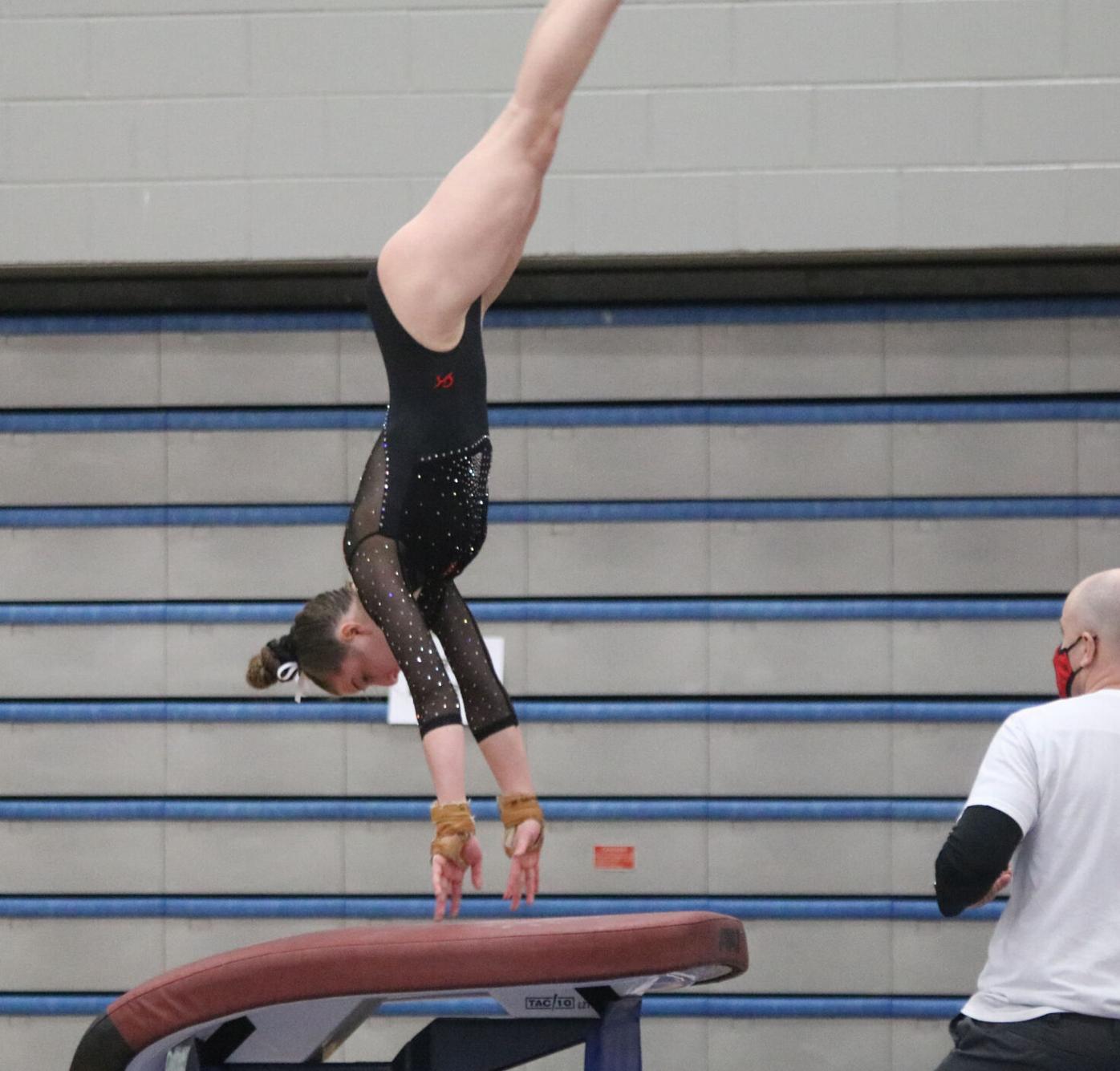 Katelyn McDowell competes in the vault for the Stillwater gymnastics team in the Class AA state meet on Saturday, March 27 at Champlin Park High School in Champlin. (Gazette staff photo by Stuart Groskreutz) 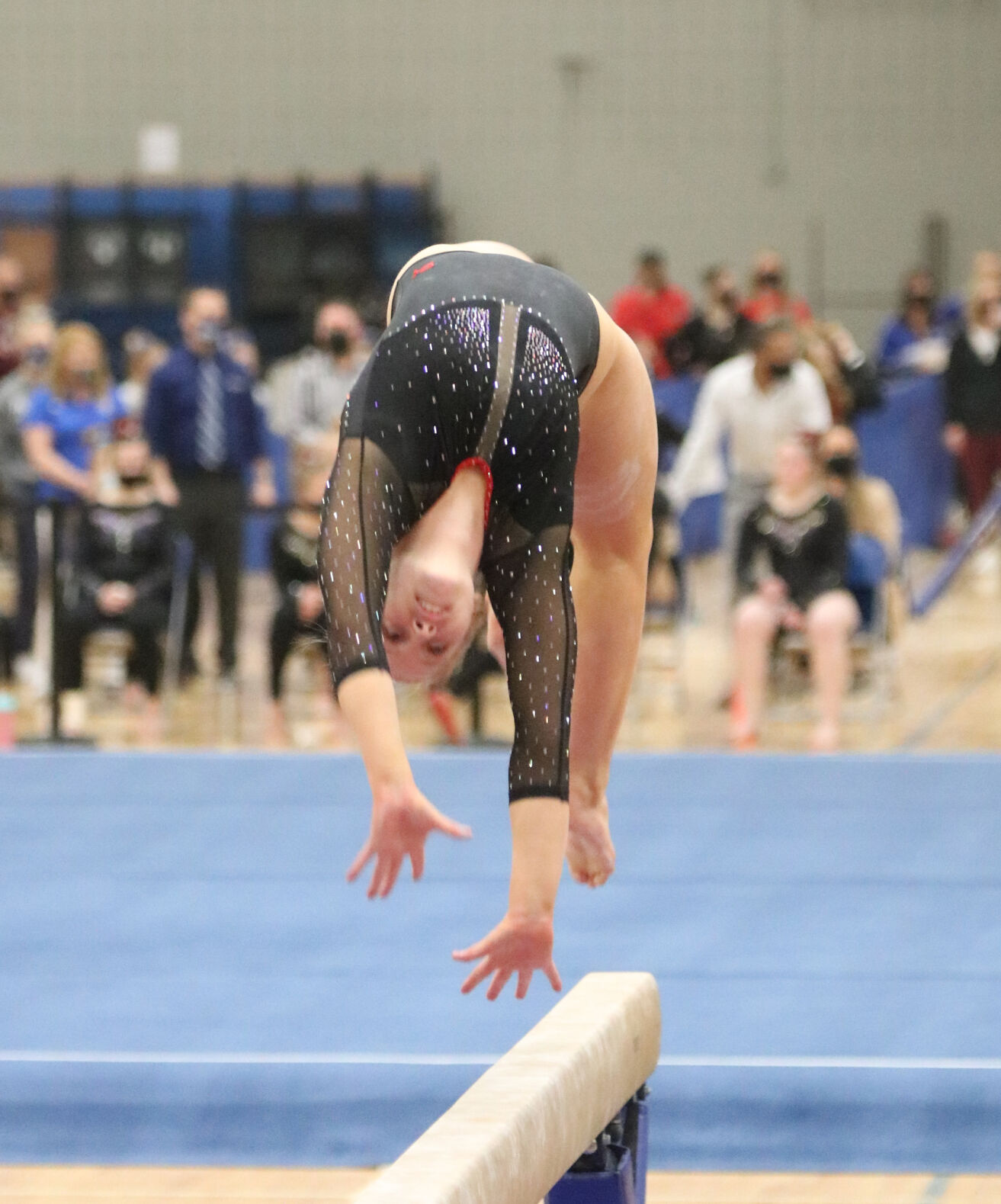 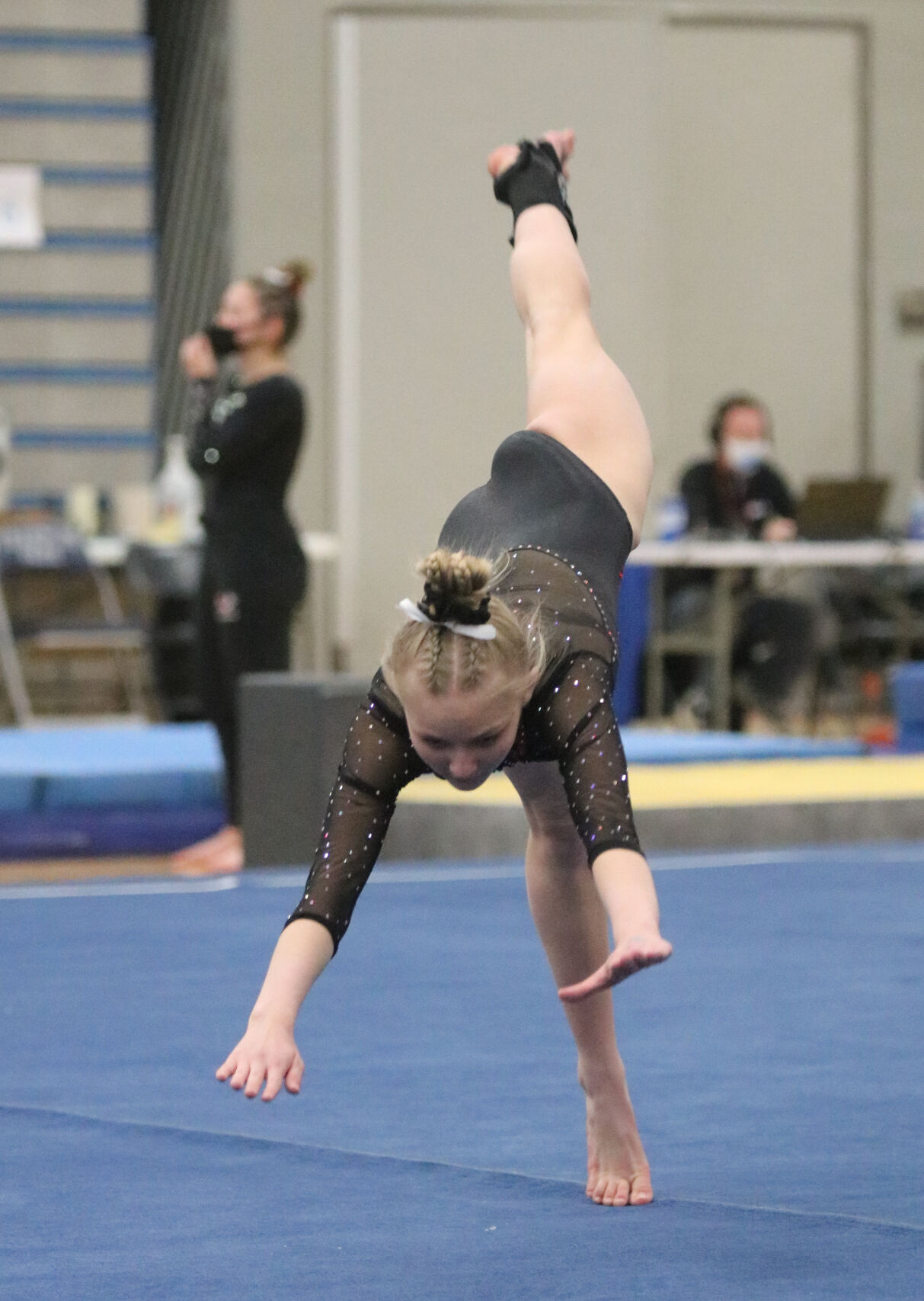 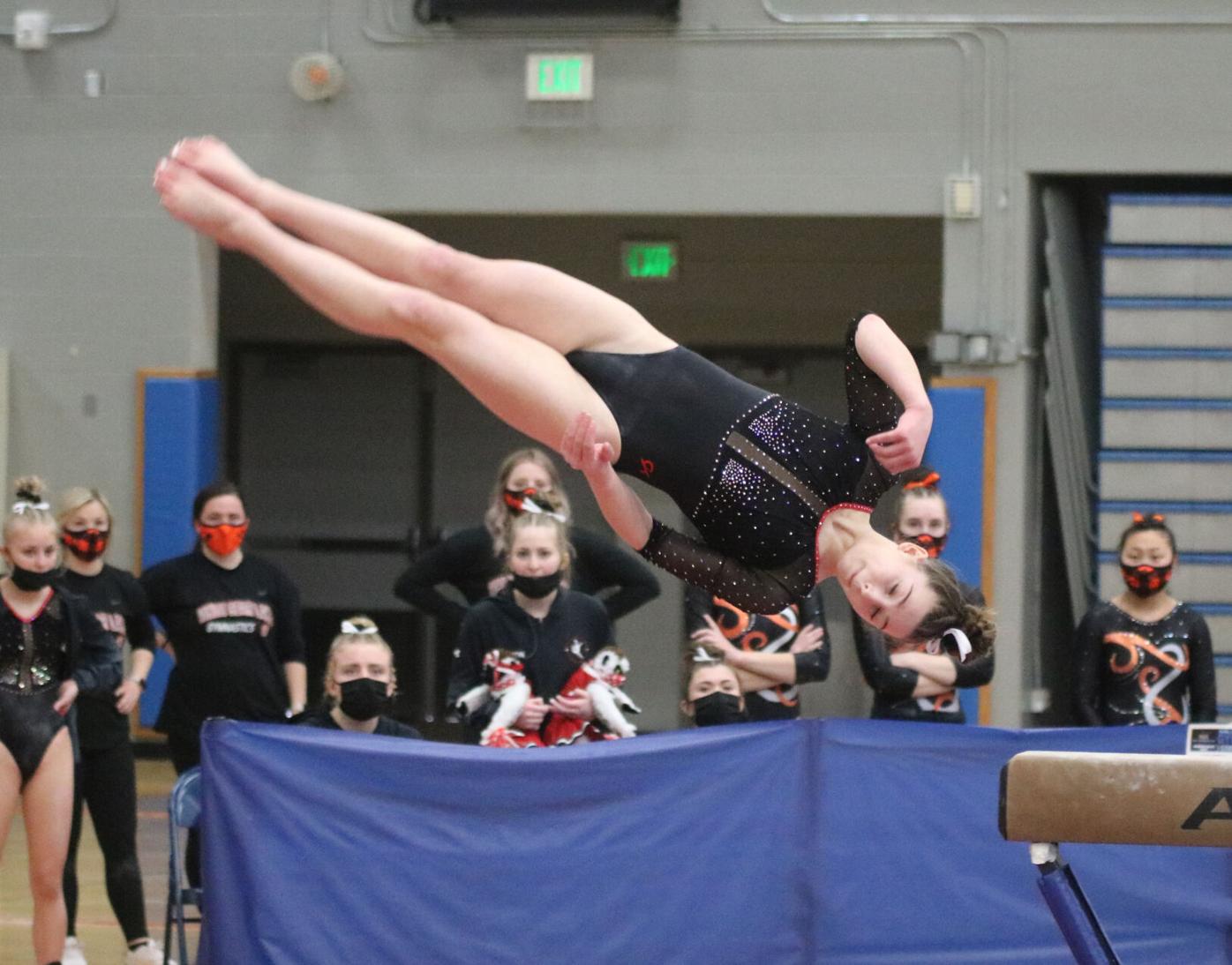 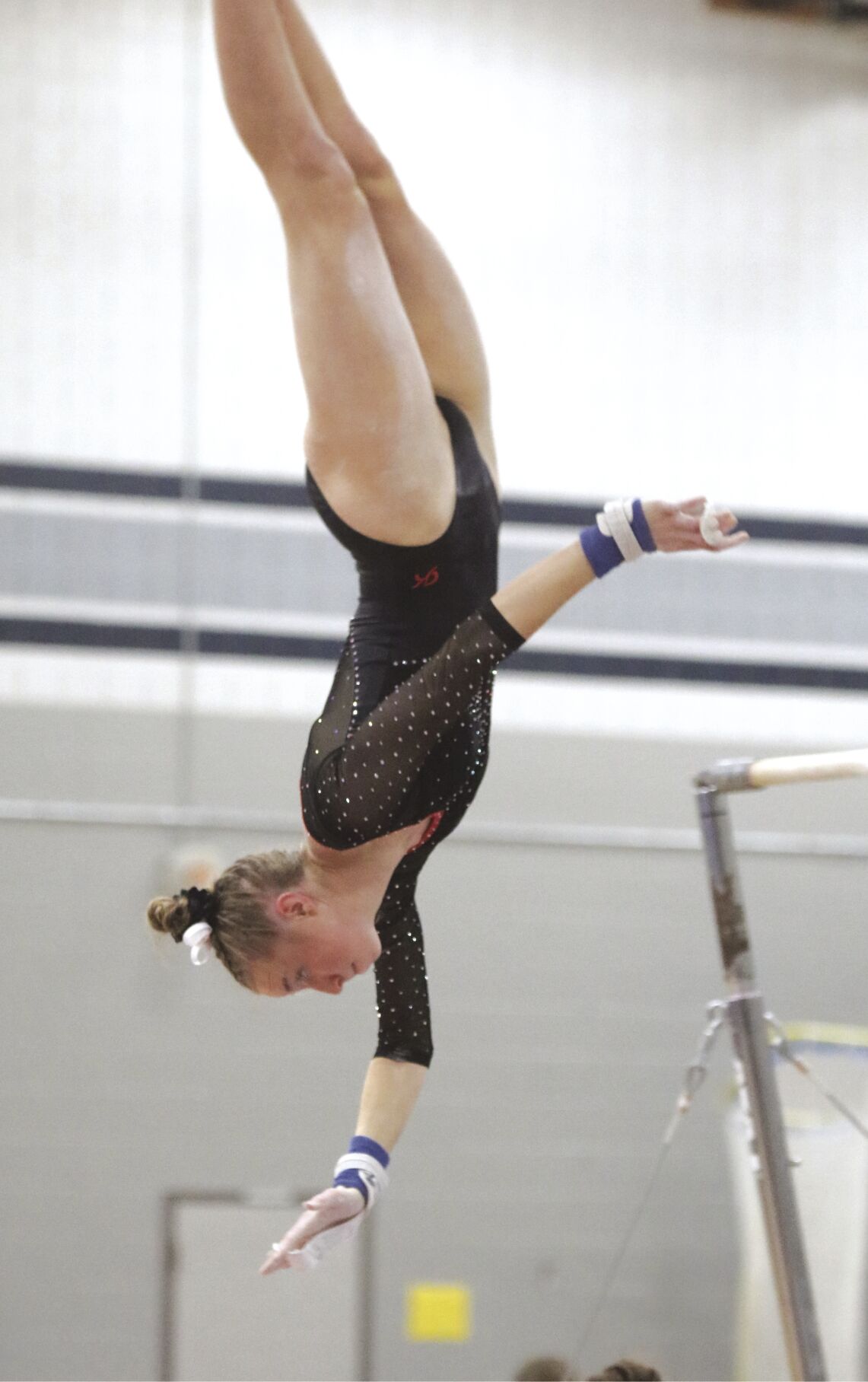 Kendall Rogers dismounts while competing for the Ponies in the uneven bars. (Gazette staff photo by Stuart Groskreutz)

Katelyn McDowell competes in the vault for the Stillwater gymnastics team in the Class AA state meet on Saturday, March 27 at Champlin Park High School in Champlin. (Gazette staff photos by Stuart Groskreutz)

Katelyn McDowell competes in the vault for the Stillwater gymnastics team in the Class AA state meet on Saturday, March 27 at Champlin Park High School in Champlin. (Gazette staff photo by Stuart Groskreutz)

Kendall Rogers dismounts while competing for the Ponies in the uneven bars. (Gazette staff photo by Stuart Groskreutz)

CHAMPLIN — A season that started with a more modest outlook grew into high expectations for the top-ranked Stillwater gymnastics team. But the Ponies were not able to match their recent performances while finishing fifth in the Class AA state meet on Saturday, March 27 at Champlin Park High School.

The Ponies posted a score of 143.925 to finish second in their four-team session and placed fifth overall following the conclusion of the meet, which was split into two sessions due to precautions related to COVID-19.

Stillwater finished comfortably ahead of Forest Lake and Eagan in duals earlier this season and had not scored lower than 147.0 in any of its previous three meets leading into state, but it just didn’t come together for the Ponies at state.

“Obviously extremely disappointing,” Dennis said. “We went in with the No. 1 ranking and had tons of confidence coming off some good meets. We were really expecting to be in the top group. It was a big drop. We hadn’t been in the 143s since the first half of the season.”

Stillwater was solid, but not outstanding, in three events. Their hopes of a top-three finish were dashed in the balance beam where the score of 33.625 was nearly three points lower than the bars (36.475), which was their second lowest scoring event.

Katelyn McDowell led the Ponies with a score of 9.225 in beam, but several falls derailed the Ponies in what is easily the most precarious of the four events.

“The beam just kind of happened in slow motion in front of us,” Dennis said. “You can fall on beam, but our girls fell like three times and it’s a half point every time.”

“That’s a whole point right there and now we’re in the mid 7’s,” Dennis said.

Stillwater’s beam score was a half-point lower than any of the other participating teams. Even Sartell-St. Stephen scored more than two points fewer in the beam (35.175) than any of its remaining three events.

“You can take a couple eights and still stay in the mix, but we lost three to three-and-a-half points just on beam,” Dennis said.

The Ponies finished with solid routines in the floor, which was their final rotation. It was the only event which produced four scores in the 9s for Stillwater, led by Ashley Peterson’s team-leading 9.475. Kendall Rogers and McDowell each received scores of 9.1 and Norah Bates completed the scoring with a 9.0.

“They hit their floor routines, but just didn’t have any fire,” Dennis said. “They just lost their enthusiasm a little bit and were just kind of flat.”

Stillwater received its highest score in the vault at 37.15, a decent start but not one to provide a spark the team was looking for out of the gates.

McDowell also led the Ponies in the vault with a score of 9.475. Liberty Quast was next with a 9.4 and Kendall Rogers wasn’t far behind with a 9.325. Heather Wiehe, one of just two seniors in the meet for Stillwater, completed the scoring with an 8.95.

The next event was the bars, where the Ponies executed clean routines but were surprised somewhat with the scores they received. Stillwater (36.475) and Sartell-St. Stephen (37.285) were the only teams to score above 36.0 in the bars.

“They were confident going in, but the vault was a little shaky and I think it got into their heads a little bit,” Dennis said. “We went to bars and everybody hit, but it seemed like the scores were a little lower than that had been getting for the same routines. I think those bars scores just really blew their confidence and we just didn’t adjust.

“We went straight from there to beam and they just lost all focus after bars.”

Most of Stillwater’s lineup was competing at state for the first time. Because of COVID-19 which limited teams to dual meets all season until four teams competed in two separate sessions for sections. The coach admitted a few more invitationals and more competitive dual meets would have been helpful, but all teams were dealing with similar circumstances.

“They never really had to be pushed,” Dennis said. “Most of our meets were not close. The feel of everything was different, too, but other teams were able to overcome that and we were not. There’s no excuses. Other teams did what they had to do and we didn’t.”

Rogers and Stanton were the only members of this year’s team who competed at state for the Ponies in their last appearance in 2019. Stillwater won the program’s first and only state championship in 2018 and followed with a runner-up finish in 2019. That run of success began with a fifth-place finish at state in 2017. Dennis is hoping a similar scenario plays out over the next few seasons.

“We took the approach that you don’t have to have the best meet of your life if you want to win, just come out and do your job,” Dennis said. “The girls seemed pretty relaxed, even when we got there.

“We could have won the whole thing with our season best.”

Instead it was Sartell-St. Stephen and Forest Lake. The Rangers, for example, scored nearly a full point higher than they did at the section meet and the coach was happy to see a fellow Suburban East Conference team perform so well at state.

“Forest Lake hasn’t been in that position so that’s great for them,” Dennis said. “We just have to focus on the positives of our season. We made it to state and things just didn’t go our way. They were good sports about it. They’re all good kids and there was no finger pointing. It was a team effort.”

And the coach was happy with the season overall, one that started late due to the pandemic and without any guarantee there would even be a state meet. Dennis is an assistant girls soccer coach and their undefeated season ended after winning the section championship.

“I think they were happy with their season and they accomplished a lot of things this year,” Dennis said. “Regardless of how we finished, we know it’s a big deal to get to state. We still made it to state, which is an accomplishment in itself. That’s the important takeaway, making it there is the big battle and we are thankful for the experience to have gone and that we were able to have a state meet. The girls understand the fall sports were not as lucky.”

Marley Michaud of Sartell-St. Stephen finished first in the vault (9.875) and uneven bars (9.725) and compiled the top all-around score at 38.125. Claire O’Gorman of Forest Lake won the floor exercise (9.65) and finished second in the all-around at 37.85. Her teammate Keely Sisco claimed the individual state title in the beam with a score of 9.575.

Stillwater was represented in all four events and featured two qualifiers in three out of four.

Ashley Peterson led all gymnasts in the first session and placed third overall in the uneven bars with a score of 9.475. Only Michaud and Carly Yang (9.6), both of Sartell-St. Stephen, posted a higher score than Peterson.

It was the top individual finish for a Stillwater gymnast at state since Gretchen Sharp placed third in the floor exercise in 2019.

“It was her first year with the team so that’s great she had success,” Ponies coach Dusty Dennis said of Peterson.

Erica Stanton’s score of 9.375 landed her in ninth place.

Peterson also placed eighth in the floor exercise with a score of 9.475. The floor was the only event Stillwater had just one individual entry.