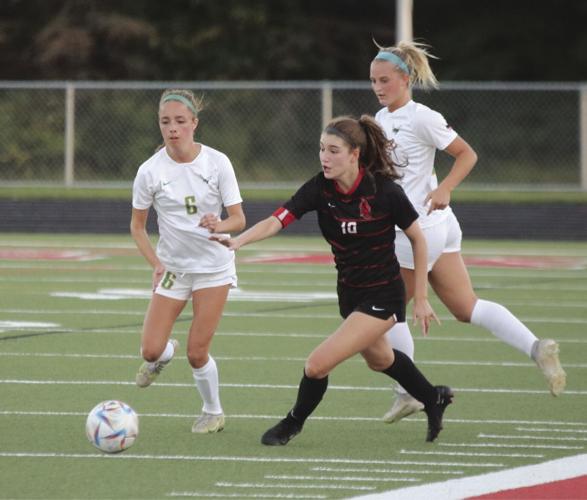 Senior Nell Smith battles for the ball in the midfield during the first half of Stillwater’s eventual 2-0 nonconference girls soccer victory over second-ranked Edina on Tuesday, Aug. 30 at Stillwater Area High School. (Gazette staff photo by Stuart Groskreutz) 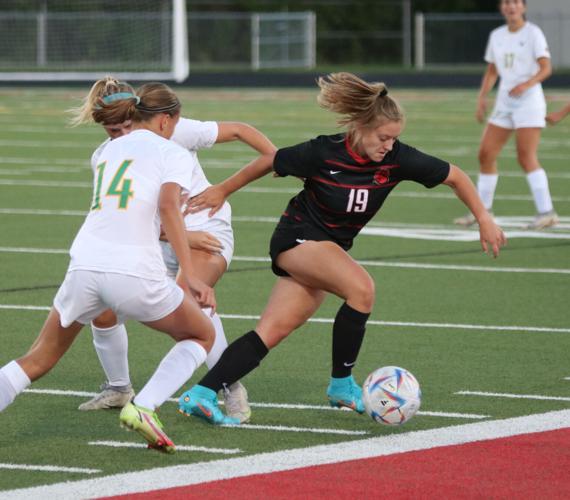 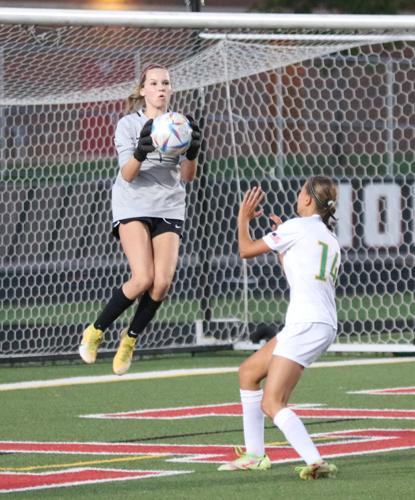 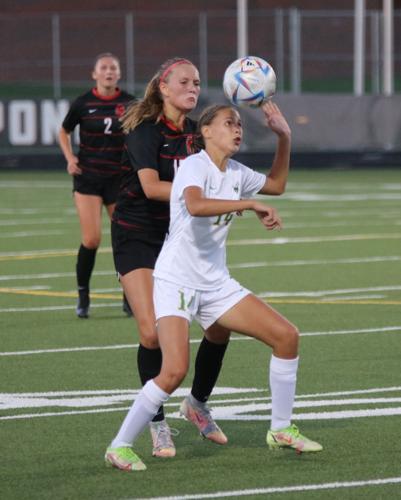 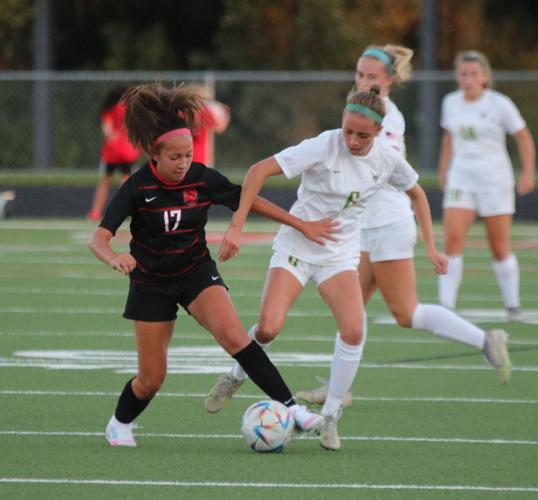 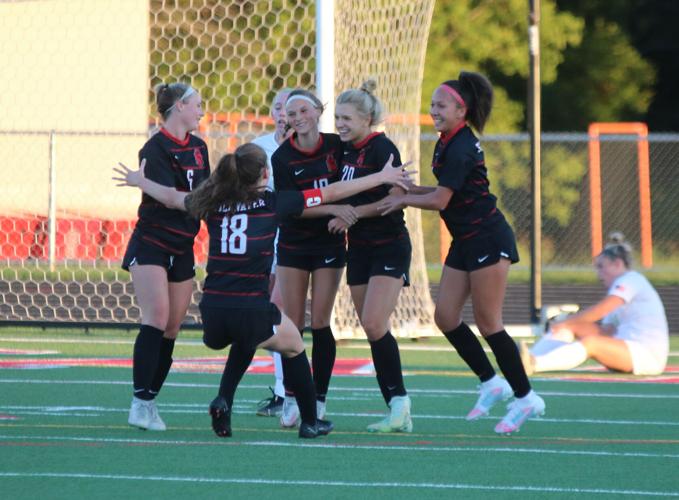 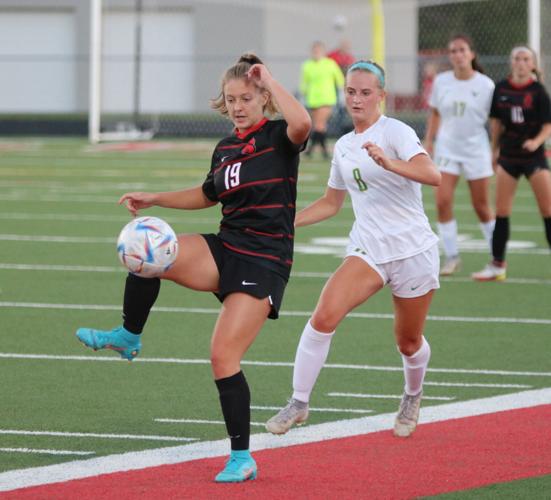 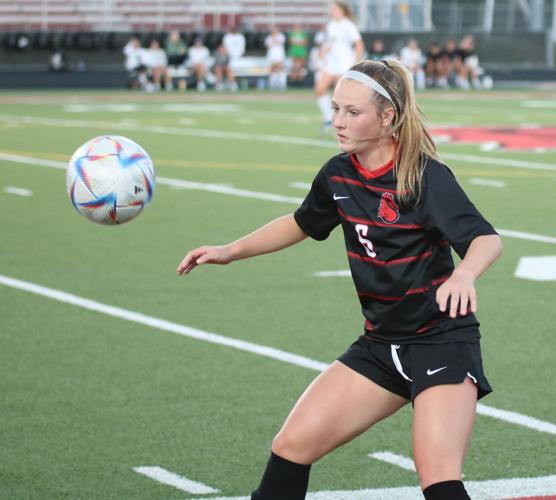 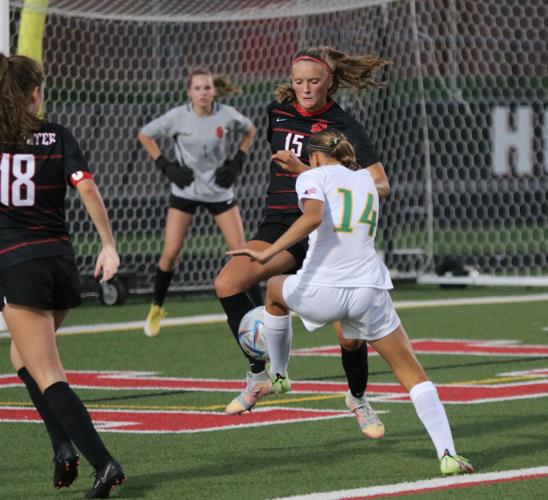 Senior Nell Smith battles for the ball in the midfield during the first half of Stillwater’s eventual 2-0 nonconference girls soccer victory over second-ranked Edina on Tuesday, Aug. 30 at Stillwater Area High School. (Gazette staff photo by Stuart Groskreutz)

OAK PARK HEIGHTS — A team with some uncertainty entering into the season has answered some of those concerns emphatically while winning three in a row, including a 2-0 nonconference victory over second-ranked Edina on Tuesday, Aug. 30 at Stillwater Area High School.

The defending state champion Ponies, who are ranked third in Class AAA, received two first-half goals from senior Luka Johnson to take control against a opponent that was likely motivated after having an undefeated season dashed by Stillwater in the state semifinals a year ago.

In that memorable contest, the Ponies stormed back from a 2-0 halftime deficit to defeat Edina 3-2. The Hornets (1-1) were unable to return the favor on Tuesday.

“I kind of reminded the girls at halftime, just remember they were up on us 2-0 and I’m sure their coach is telling them the exact same thing here,” Ponies coach Mike Huber said.

The play and number of opportunities was similar for both teams, but Johnson provided a big boost early for the Ponies while scoring in the eighth minute. She also padded the lead with an assist from Nell Smith after a free kick in the 25th minute for a 2-0 advantage.

“It wa a very good win,” Huber said. “Edina is one of the best teams in the state and we kind of figured this would be a game for us to gauge where we were at. Edina is probably a better team than us, but we battled and worked hard and grinded it out.”

Johnson is off to a torrid start for the Ponies while racking up five goals and two assists in three games.

Stillwater finished with six shots on goal, one fewer than Edina with seven.

“We put a lot of balls forward and our forwards did a good job of getting behind their back line and creating some dangerous opportunities,” Huber said. “We could have scored two or three legitimate goals in the second half as well.”

Edina is a veteran group with several holdovers from last year’s team. The Ponies bring back some players, but are also starting five freshman while carrying 10 on the varsity roster.

“I think more than anything we kind of learned we’re going to have to be physical and aggressive,” Huber said. “We talked about winning balls in the air — we did a good job of it today, but I think we can do better. I think we made improvement today, but Edina showed us we need to be even better.”

“I thought she had a great game,” Huber said. “She didn’t really give up any rebounds and, especially for a freshman, to come in and play against a team like Edina, I thought she played fantastic.”

Edina is one of several strong opponents the Ponies will face before beginning conference play. Stillwater has outscored its first three opponents by a combined 12-0.

“The second half we weathered the storm and Edina put a lot of pressure on our back line, but the girls work hard and had the wont to win today,” Huber said. “I think Edina is going to be in the running for a state championship at the end of the year and I think this will show no matter who we play we can compete against everybody. I hope the girls don’t too overconfident, because it was a great win, but every other team is still out there to get you.”

The Ponies were scheduled to face ninth-ranked Lakeville North on Sept. 1 and will host top-ranked Rosemount in another nonconference game on Tuesday, Sept. 6.

At Oak Park Heights, the Ponies scored early and often while building a seven-goal halftime lead on the way to a 9-0 nonconference victory over Moorhead on Friday, Aug. 26 at SAHS.

Stillwater scored five times in the first 12 minutes of play.

Izzy de St. Aubin and Lauren Willhaus also contributed a goal each for Stillwater, which held a 15-1 advantage in shots on goal.

Freshman Parker Reardon required just one save to earn the shutout in goal for the Poneis.

“We didn’t want to seem to go forward against Maple Grove (in the opener), but obviously we went forward right from the get-go in this one,” Ponies coach Mike Huber said. “We had a lot of good goal, with Muths, Willhaus and de St. Aubin getting their first varsity goals. It was good to see a lot of people involved and hopefully we keep getting better and better each game.”

At Maple Grove, Luka Johnson scored in the seventh minute and the Ponies made it stand up while knocking off eighth-ranked Maple Grove in the season opener on Thursday, Aug. 25 at Maple Grove High School.

Ponies coach Mike Huber said it wasn’t all smooth sailing, but was pleased to come out with the win.

“It was a bit of a back-and-forth game,” the coach said. “I think we should have been the better team, but we weren’t, and I wasn’t super hapy after the game. We didn’t play up to our potential, but we did create some opportunities that were in front of us.”

Goalkeeper Reese Elzen turned away nine shots and the Ponies were able to avoid trouble late as Maple Grove had an apparent goal occur just after time expired to end the game.

“Historically, Maple Grove has been a team that’s won their section is in the section finals the last six or seven years, so it was a good win,” Huber said. “We started five freshmen, so I’ll take any win. There were a lot of new faces in their first varsity game ever and they learned it will be more physical than they’re used to and maybe won’t have as much time on the ball as they’re used to. It was a good learning experience for them.” 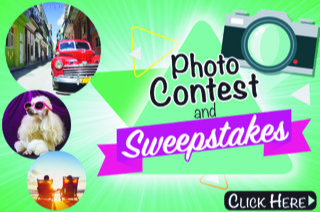