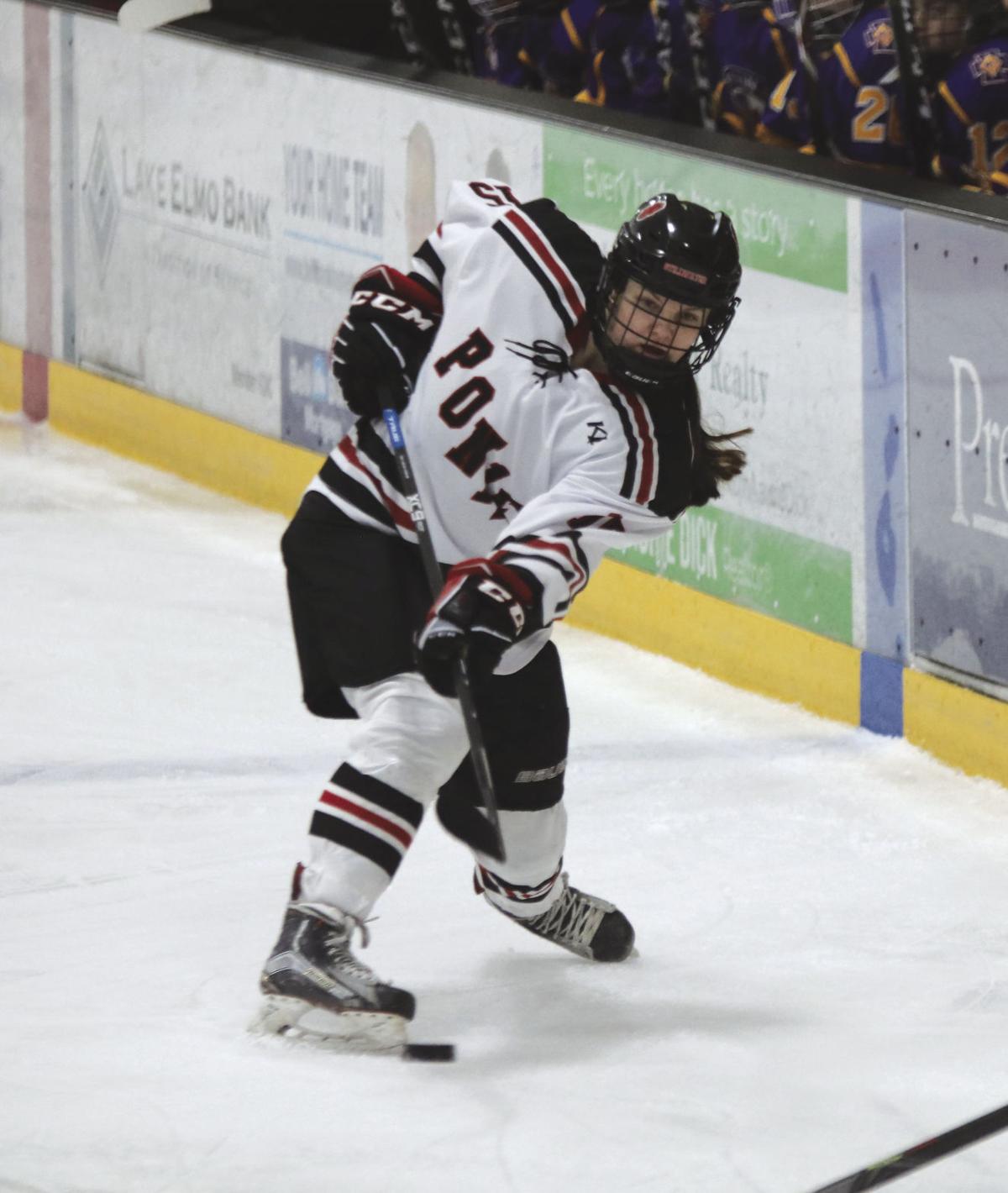 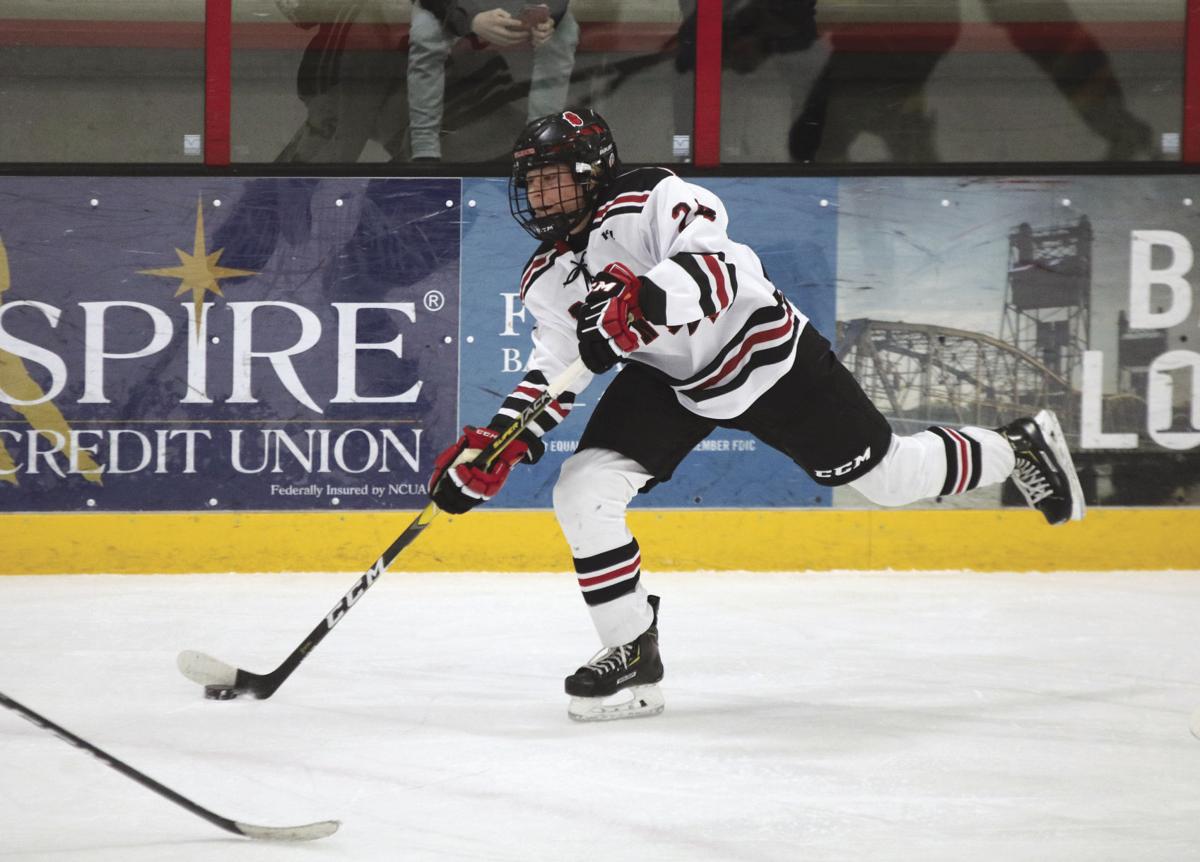 Stillwater senior forward Haley Eder-Zdechlik sends the puck towards the net on a rush in the first period of a girls hockey game against Cretin-Derham Hall on Tuesday, Jan. 7 at the SCVRC. (Gazette staff photo by Stuart Groskreutz) 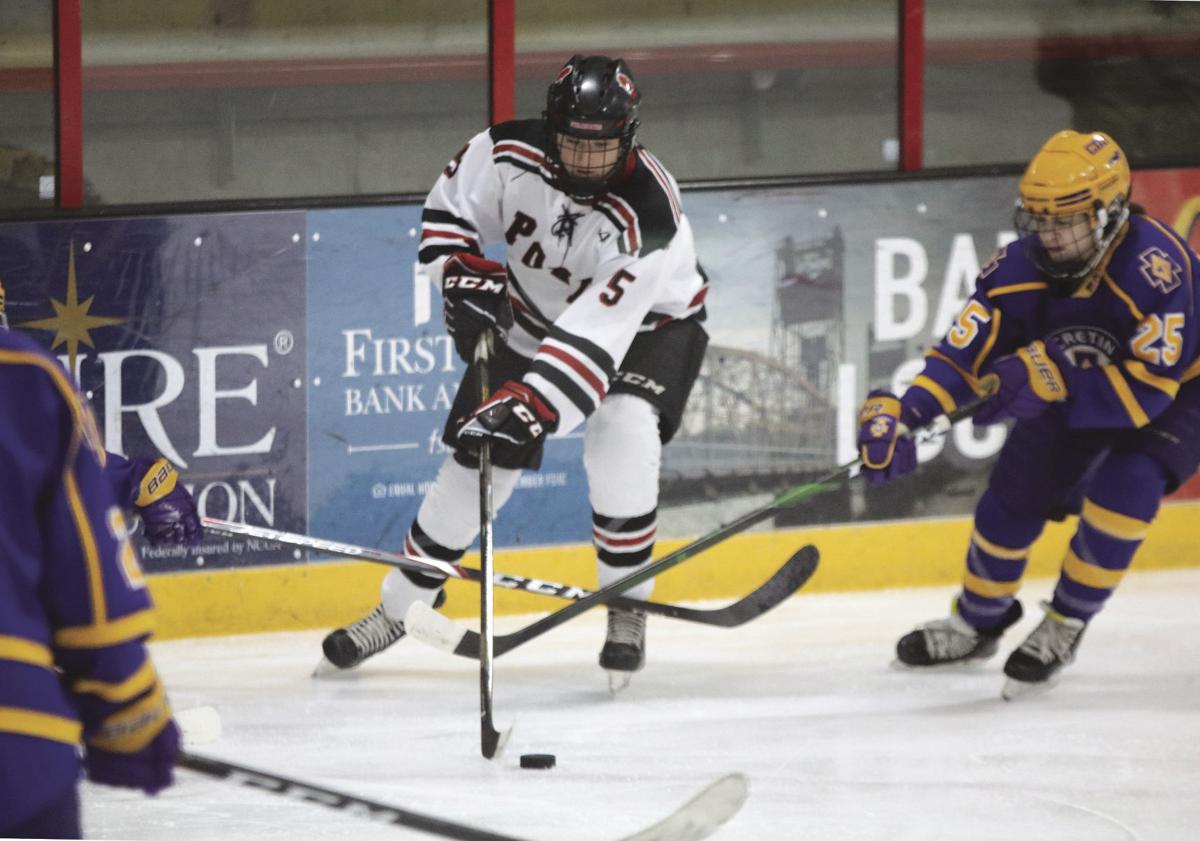 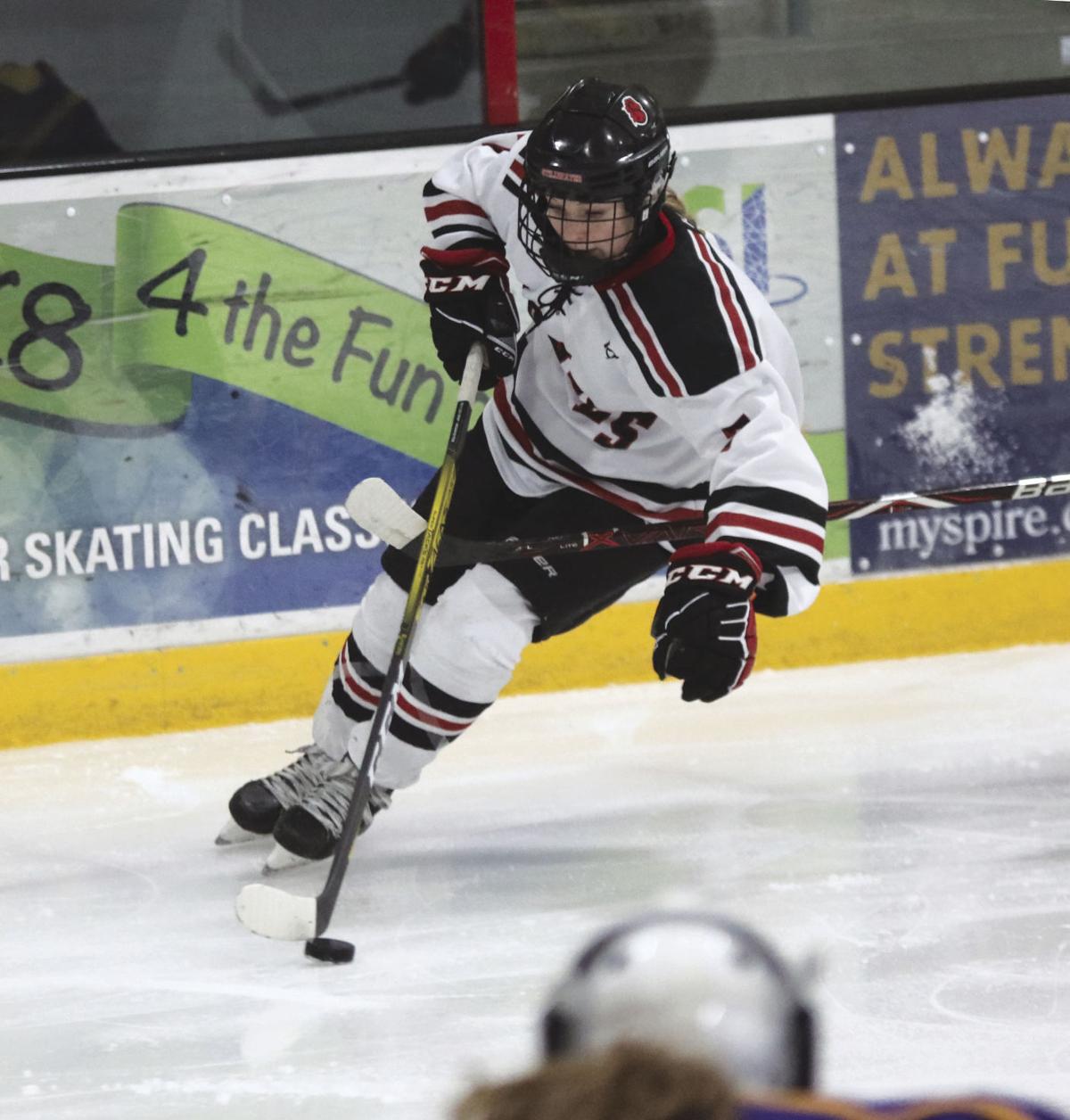 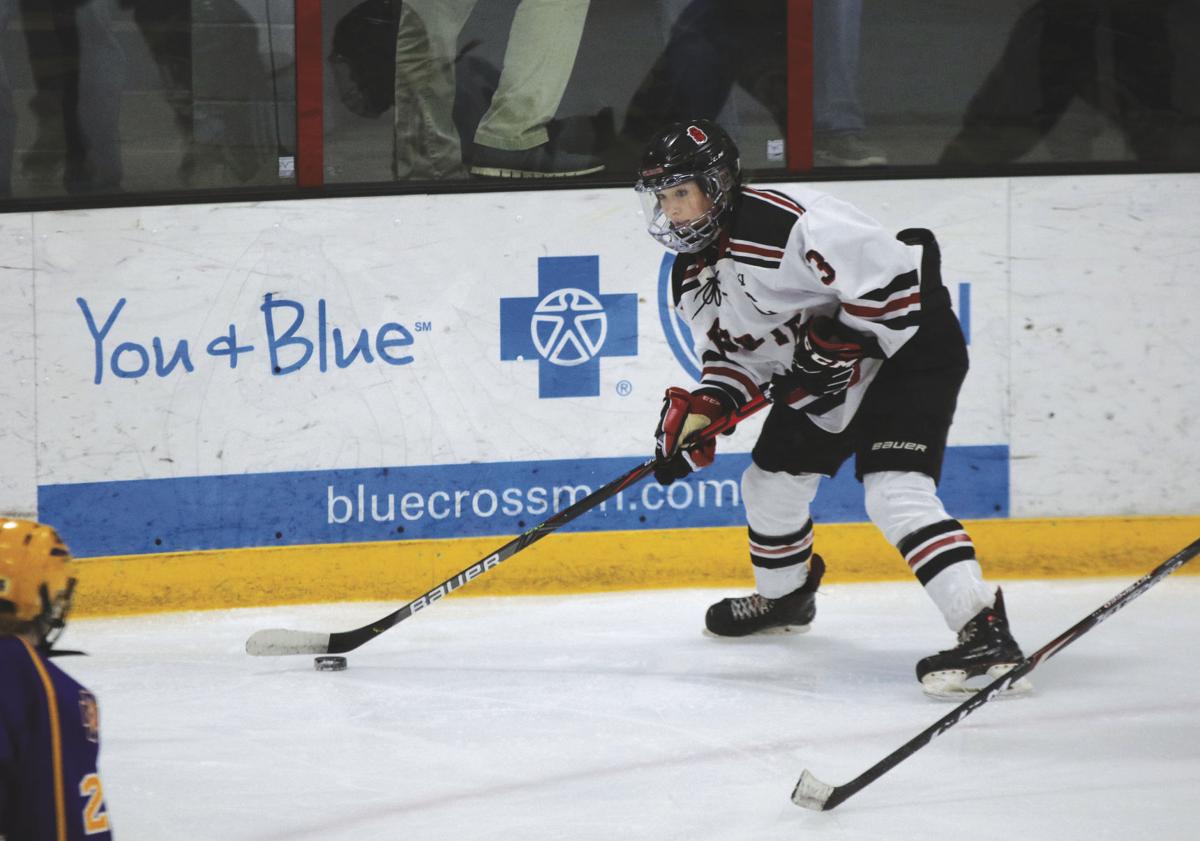 Stillwater senior forward Haley Eder-Zdechlik sends the puck towards the net on a rush in the first period of a girls hockey game against Cretin-Derham Hall on Tuesday, Jan. 7 at the SCVRC. (Gazette staff photo by Stuart Groskreutz)

A strong performance only yielded a draw for the Stillwater girls hockey team which skated to a 2-all tie with Cretin-Derham Hall in a Suburban East Confernece game on Tuesday, Jan. 7 at the St. Croix Valley Rec Center.

Stillwater has not won a conference championship since 2006.

“It felt like a horrible tie,” Ponies coach Mira Jalosuo said. “I felt like we lost. I thought we deserved to win and it wasn’t the outcome we were hoping for. We expect to win every game and then we tie a game and outshot them by 20 shots. It’s a bad tie for me.”

Stillwater controlled much of the opening period, but Hannah Fritz was sharp in goal for the Raiders while stopping 13 shots in the period. Kiera Ryan also came through with a goal with just 24 seconds remaining in the period to provide a 1-0 lead.

“It’s not ideal to be down when you dominate the period, but it doesn’t always end up like that and that’s a part of the game,” Jalosuo said. “Overall, I was happy with the way the girls were playing in the first and all night.”

The Ponies eventually broke through in the second on a power play goal by Lexie Ligday at 5:36 on assists by Morgan Wohlers and Sophie Schuster. Lauren Einan added another tally at 12:07 to provide a 2-1 lead for Stillwater. Haley Eder-Zdechlik and Sydney Scheel were credited with the assists.

“The response was awesome there,” Jalosuo said. “To be able to score a power play goal early in the second we scored on a two-on-one situation, I was very happy with the response. The girls were down by a goal, but that’s the sign of a good team that they knew the goals will come and we had to stay patient.”

But that was all the Ponies could muster against Fritz, who finished with 36 saves.

Ryan, who also scored the game-winner with less than a minute remaining in Cretin-Derham Hall’s victory over the Ponies earlier this season, tied the game this time around at 9:05 of the third on an assist by Lexi Bonfe.

Sophie Cronk finished with 20 saves for the Ponies, including two in overtime.

The Ponies were stymied for much of the night against Cretin-Derham Hall, but did not have that problem while scoring early and often in an 11-2 conference victory over White Bear Lake on Saturday, Jan. 4 at the SCVRC.

Nine different players scored at least one goal for the Ponies, a surge that began with Alaina Tanski’s goal just 2:24 into the game. Madison Loberg of White Bear Lake answered just 14 seconds later, but Lexi Huber scored twice and Sydney Johnson and Josie St. Martin added a goal each as the Ponies built a 5-1 lead.

The Bears (1-10-0 SEC, 4-13-0), who qualified for the state tournament a year ago, added a goal with 92 seconds remaining in the first, but Stillwater tacked on six unanswered goals over the final two periods to pull away.

Huber and St. Martin each finished with two goals while Tanski notched four assists to go along with her early goal.

“I thought we played better (against Cretin-Derham Hall) than when we played on Saturday,” Ponies coach Mira Jalosuo said. “That’s the goofy thing about hockey, sometimes you win when you’re not playing your best and sometimes you lose when you play very good hockey.”

“We can’t give up two goals when they had nine shots so we have to play better defense there, but I’m very happy with the amount of goals,” Jalosuo said. “We had a lot of different people on the scoresheet so that was one of the positive things for us.”

At Minnetonka, after Stillwater closed the gap early in the third period to climb within one, the third-ranked Skippers scored the next goal to spur them on to a 4-1 nonconference victory on Thursday, Jan. 2 at the Pagel Activity Center.

“I felt like we were right there with them, but they capitalized on a couple opportunities and that was the difference in the game,” Ponies coach Mira Jalosuo said.

Emily Bayless and Kayley Crawford scored a goal each for Minnetonka (14-2-1), but the Ponies climbed within 2-1 on a goal from Haley Eder-Zdechlik just over a minute into the third.

The Ponies went on the power play soon after, but then a slashing penalty assessed to Stillwater negated that and it was Olivia LaRoche for the Skippers who scored the next goal to pull away.

“If felt like if we stay on the power play we would tie the game,” Jalosuo said. “We had momentum, but they ended up scoring the third goal.”

Sophie Cronk finished with 30 saves for the Ponies, who were outshot 34-25.