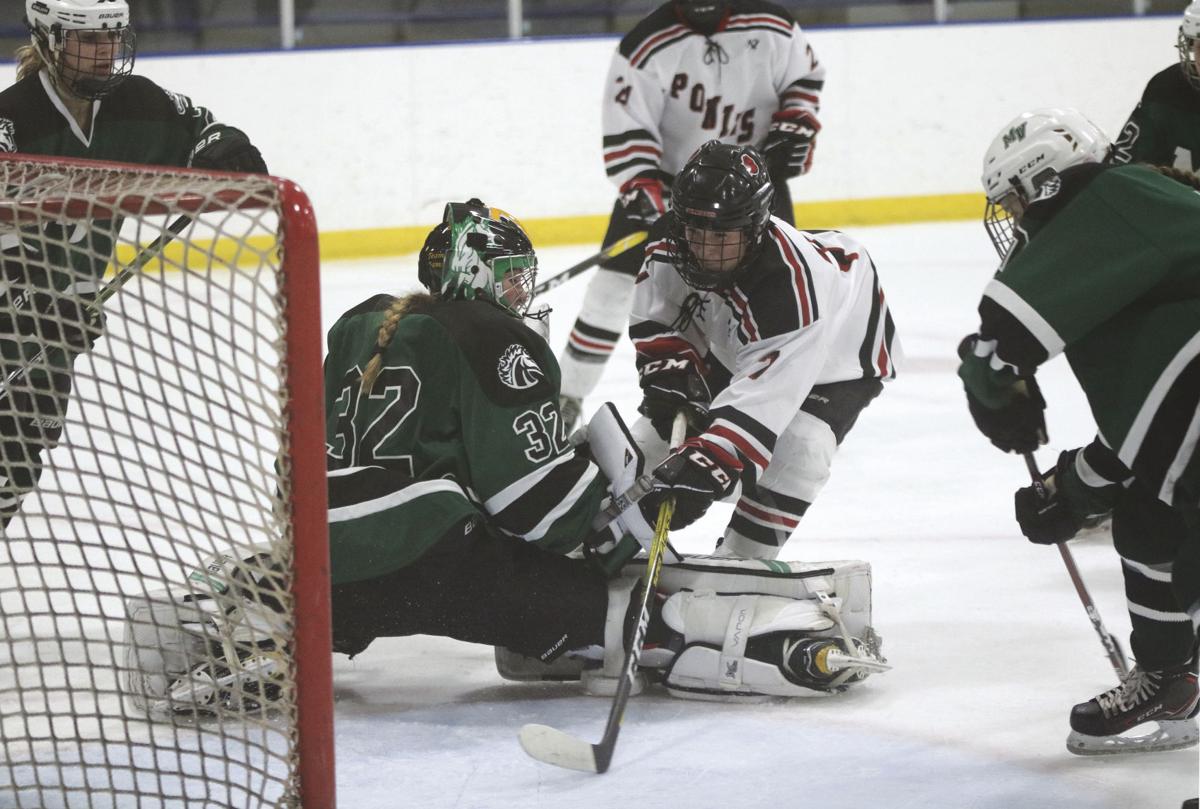 Senior Lauren Einan slides the puck past Mounds View goaltender Abbie Thompson to complete the hat trick in the second period as part of Stillwater’s 5-2 victory in the Section 4AA semifinals on Tuesday, Feb. 11 at Aldrich Arena in Maplewood. (Gazette staff photo by Stuart Groskreutz) 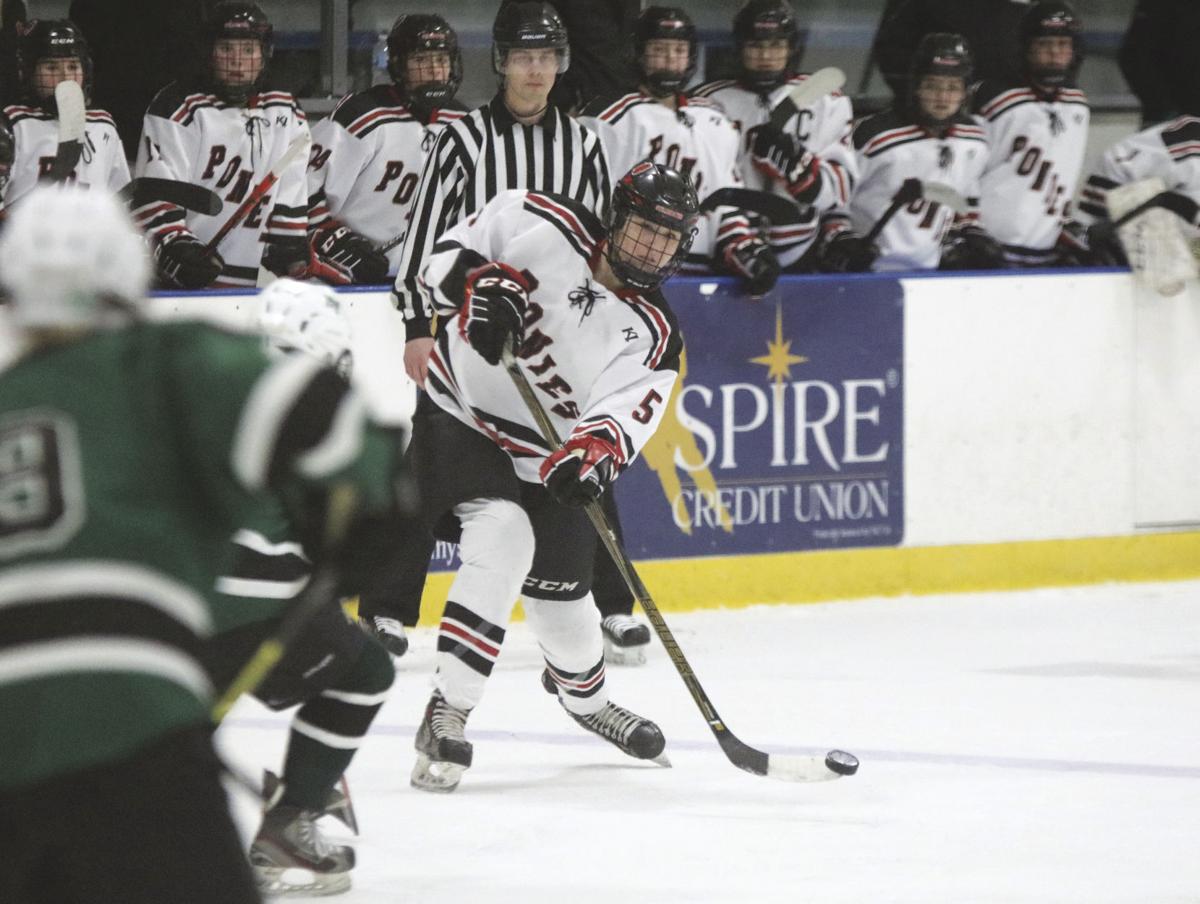 Defenseman Anne McGuire swings a pass in front of the blue line for the Ponies. (Gazette staff photos by Stuart Groskreutz)

Senior Lauren Einan slides the puck past Mounds View goaltender Abbie Thompson to complete the hat trick in the second period as part of Stillwater’s 5-2 victory in the Section 4AA semifinals on Tuesday, Feb. 11 at Aldrich Arena in Maplewood. (Gazette staff photo by Stuart Groskreutz)

Defenseman Anne McGuire swings a pass in front of the blue line for the Ponies. (Gazette staff photos by Stuart Groskreutz)

The Ponies jumped out to a four-goal lead after two periods and held off Mounds View for a 5-2 triumph in the section semifinals on Tuesday, Feb. 11 at Aldrich Arena.

It was Stillwater’s third victory this season over the sixth-seeded Mustangs (9-15-3), who upended third-seeded Roseville 4-2 in the quarterfinals.

Stillwater (21-5-1), which is ranked seventh in Class AA, will face top-seeded Hill-Murray (17-9-1) in the finals on Friday, Feb. 14 at Aldrich Arena. The Pioneers advanced to the finals with a 1-0 victory over Woodbury in the semifinals.

The Ponies jumped on Mounds View early as Alaina Tanski scored on assists by Lexi Huber and Sophie Schuster just 1:17 into the opening period. Lauren Einan extended Stillwater’s lead with the first of her goals at 12:13 on an assist from Morgan Wohlers.

Einan also scored just 21 seconds apart in the second period, first on an assist from Haley Eder-Zdechlik at 11:37 and again to complete the natural hat trick at 11:58 with help from Jacki Kulzer.

“I think we were outstanding in the first and second period,” Ponies coach Mira Jalosuo said.

Mounds View broke through on the power play with Lindsay Berggren’s goal at 8:47 of the third period, but Kylie Ligday answered for the Ponies with an empty-net, short-handed goal at 14:38 for a 5-1 lead. Berggren added a second goal with little more than a minute remaining in the game.

“It’s never easy to end anybody’s season,” Jalosuo said. “Credit to Mounds View, they came ready to play in the third period and they gave their all. I’m extremely proud of my team.”

Stillwater outshot the Raiders 40-22, including 31-11 in the first two periods. Sophie Cronk finished with 20 saves for the Ponies.

“We just kept playing the game we normally play,” Jalusuo said. “We didn’t change anything and usually when teams are up they start saving the lead, but we did not do that. We just kept going and putting pucks behind their d-zone and pressuring them.”

The Ponies are seeking the program’s first trip to state since 2009, when they claimed the second of their two state championships. Stillwater lost to the Pioneers 6-1 in the season opener on Nov. 9, but the Ponies have grown since then according to Jalosuo, who is in her first season as head coach.

“I would say our systems are now locked in,” the coach said. “I knew we were going to struggle until the Christmas break because it’s the style of play I like to have. It’s aggressive and I knew they were going to make a lot of mistakes, but I just feel confident in the girls.

“We are just excited. We are not nervous. We know that it’s our day on Friday and we feel extremely confident. The girls have been preparing for this moment since the first week of June when I officially met the team and we started to work on and off the ice. These girls have been waking up at 5:30 a.m. to put the extra work in the training room and it shows. They feel confident.”

Stillwater outscored the defending section champion Bears by a combined 17-2 in two earlier victories this season, but White Bear Lake (5-20-1) did not go quietly.

Stephanie Wokerstorfer scored at 9:36 of the second period as the Bears evened the score at 3-all.

Kylie Ligday provided a boost for the Ponies going into the third period after scoring on assists from Lexi Huber and Josie St. Martin with just 20 seconds remaining in the second to give Stillwater a 4-3 lead.

Lauren Einan scored on the power play six minutes into the third as the Ponies took over the game. Stillwater outshot the Bears 12-3 in the third period.

“Even when things are not going our way we know that we can still beam teams, so that’s definitely a confidence booster for us.”

Haley Eder-Zdechlik opened the scoring for the Ponies at 5:33 of the first period. Sophie Verkerke answered for the Bears less than 30 seconds later to even the score at 1-all.

Alaina Tanski and Sydney Schuster followed with back-to-back goals for the Ponies, but White Bear Lake answered with a goal from Jillian Moore to climb within 3-2 after the first. The pressure only increased when Wokerstorfer scored midway through the second as the Bears pulled even at 3-all.

Sophie Cronk finished with 14 saves for the Ponies, who held a 29-17 advantage in shots on goal.