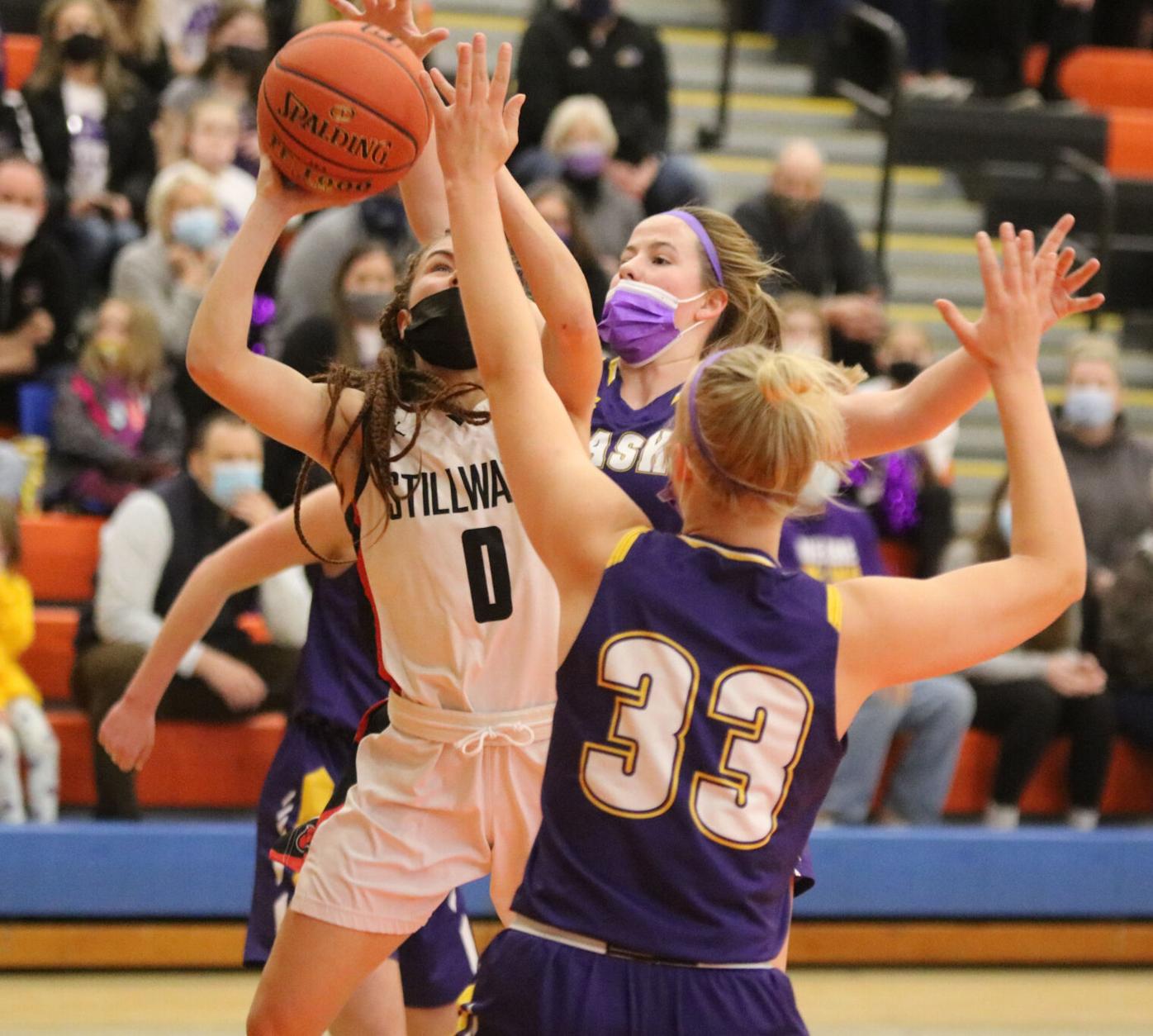 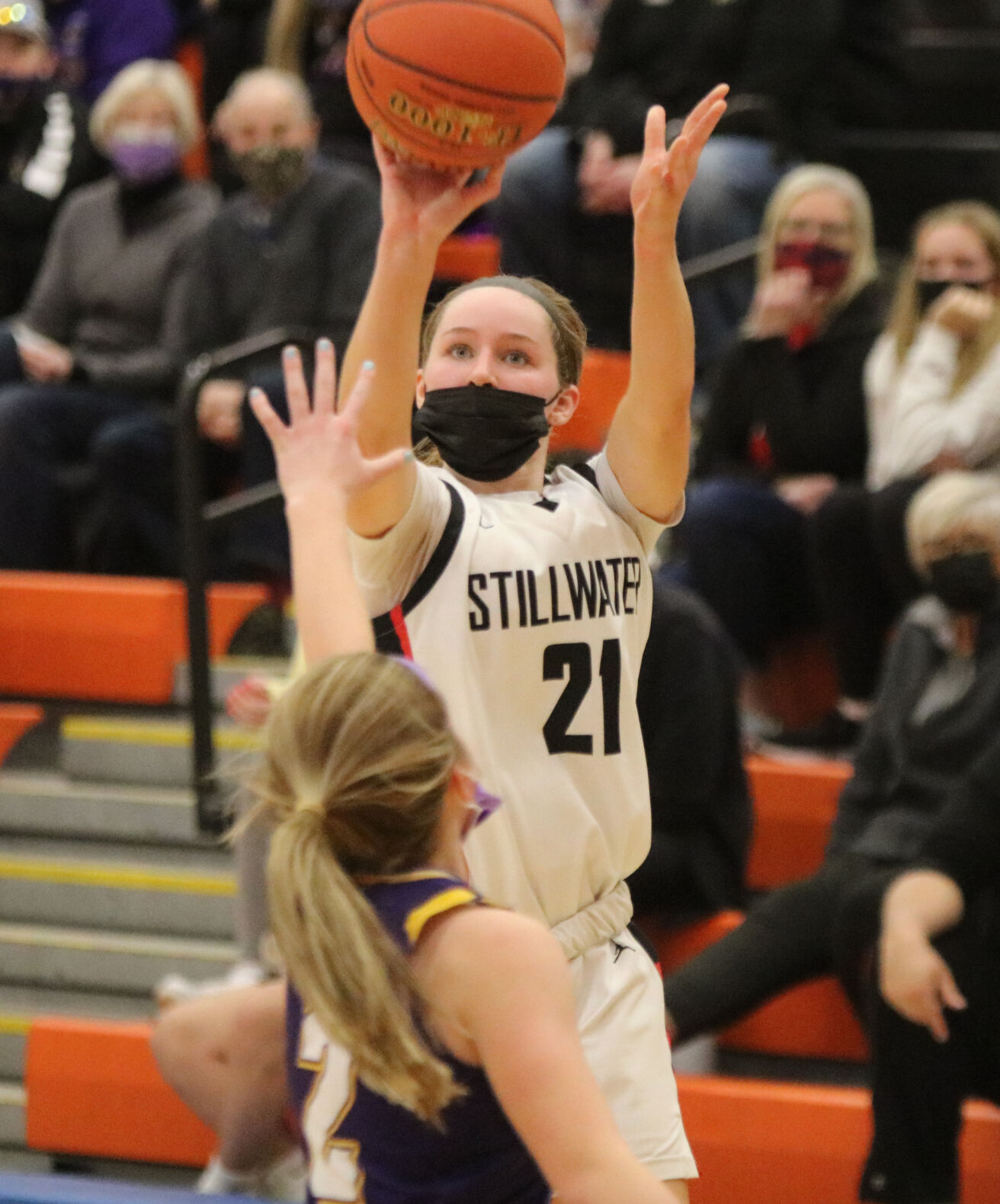 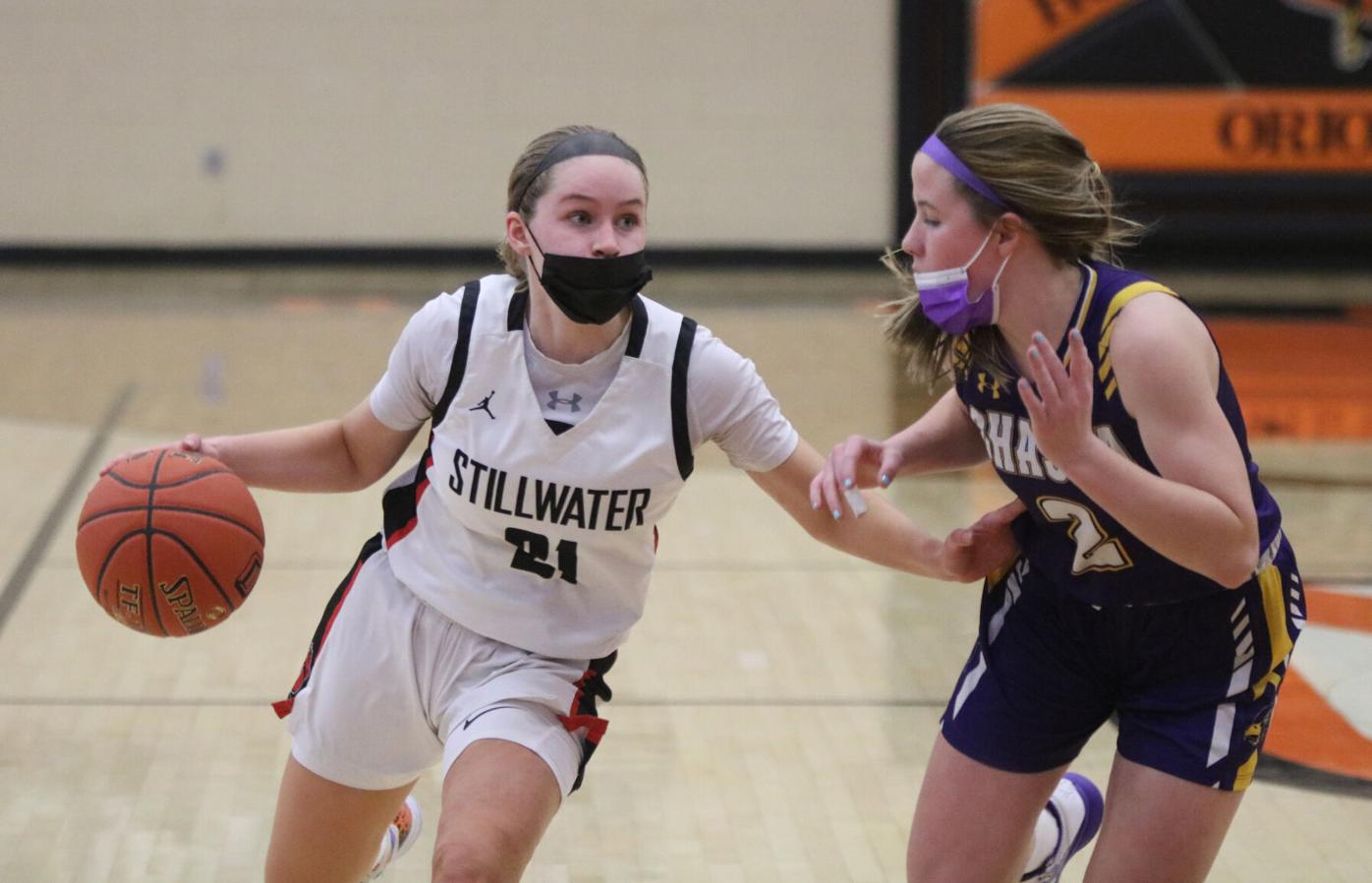 Amber Scalia is cut off on a drive to the basket during the second half of Stillwater’s Class AAAA state quarterfinal game against Chaska on Tuesday, March 30 at Osseo High School. (Gazette staff photo by Stuart Groskreutz) 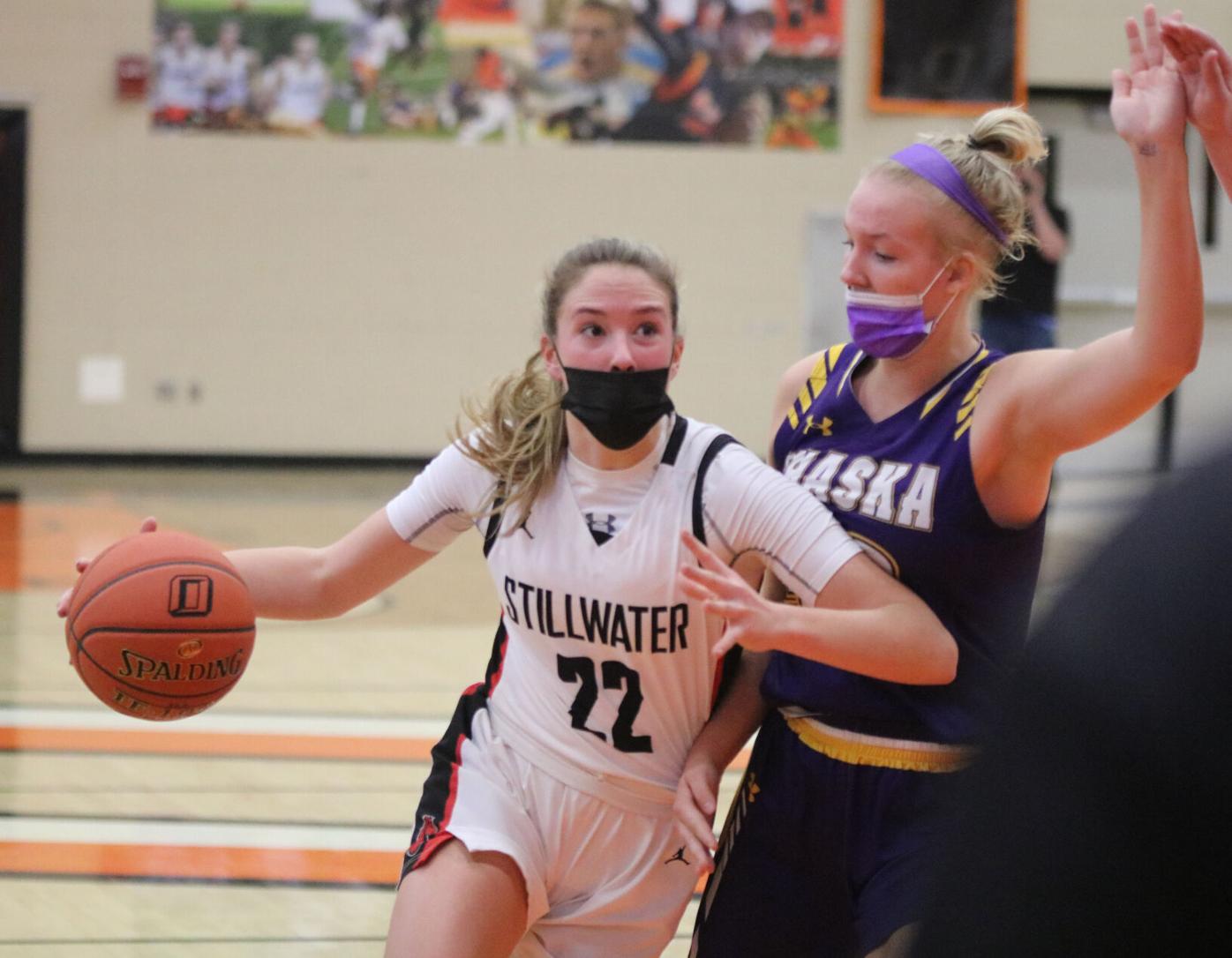 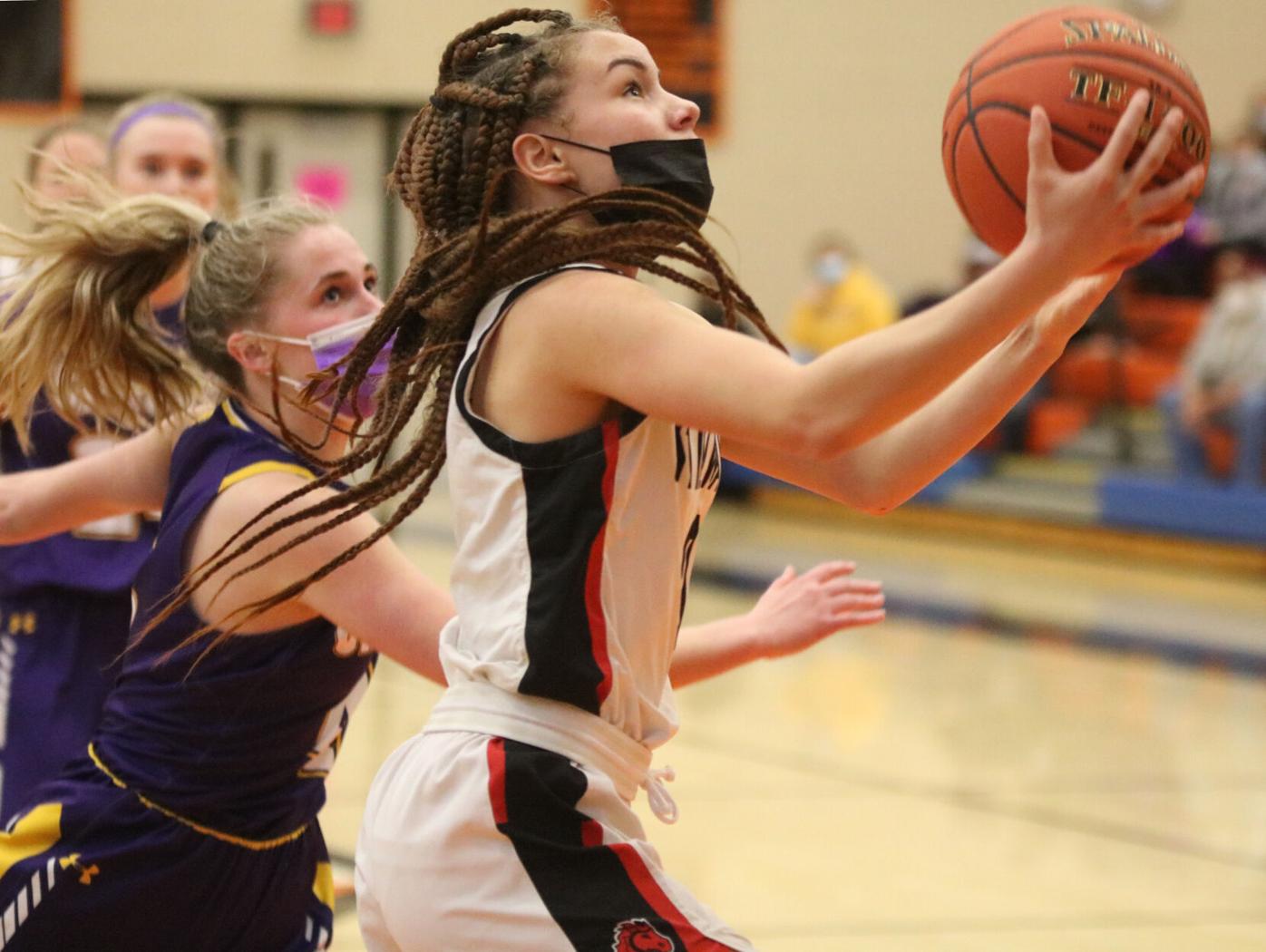 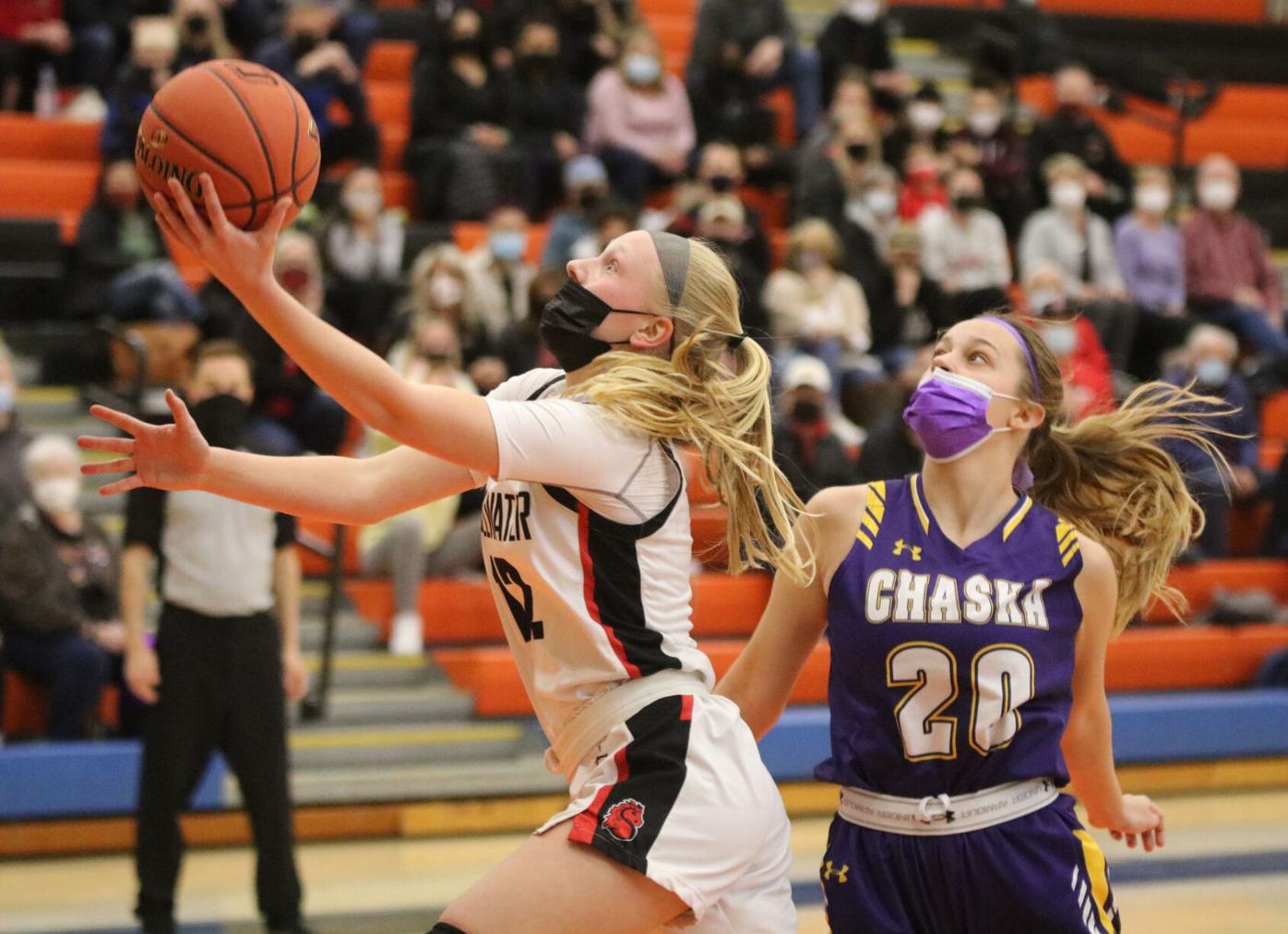 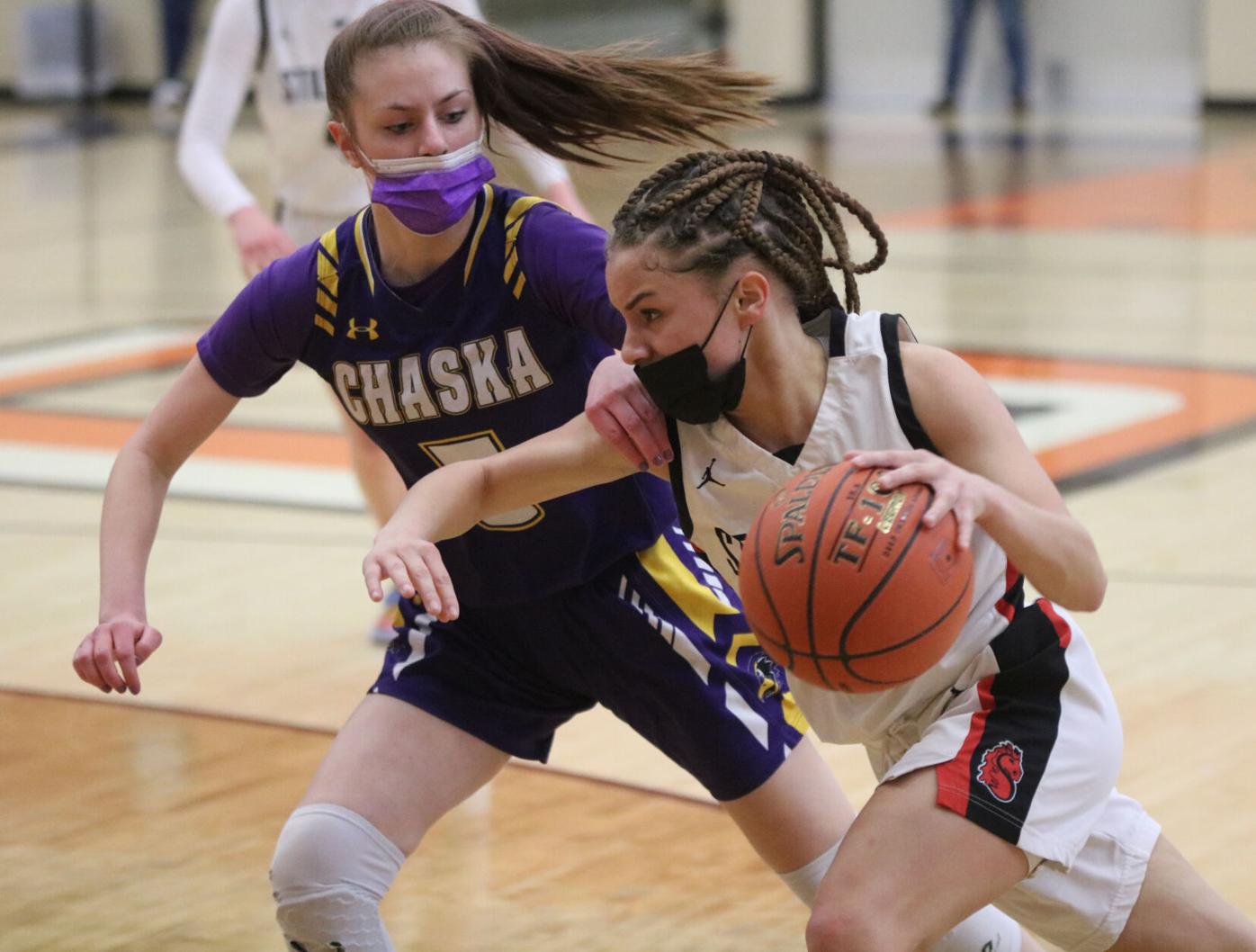 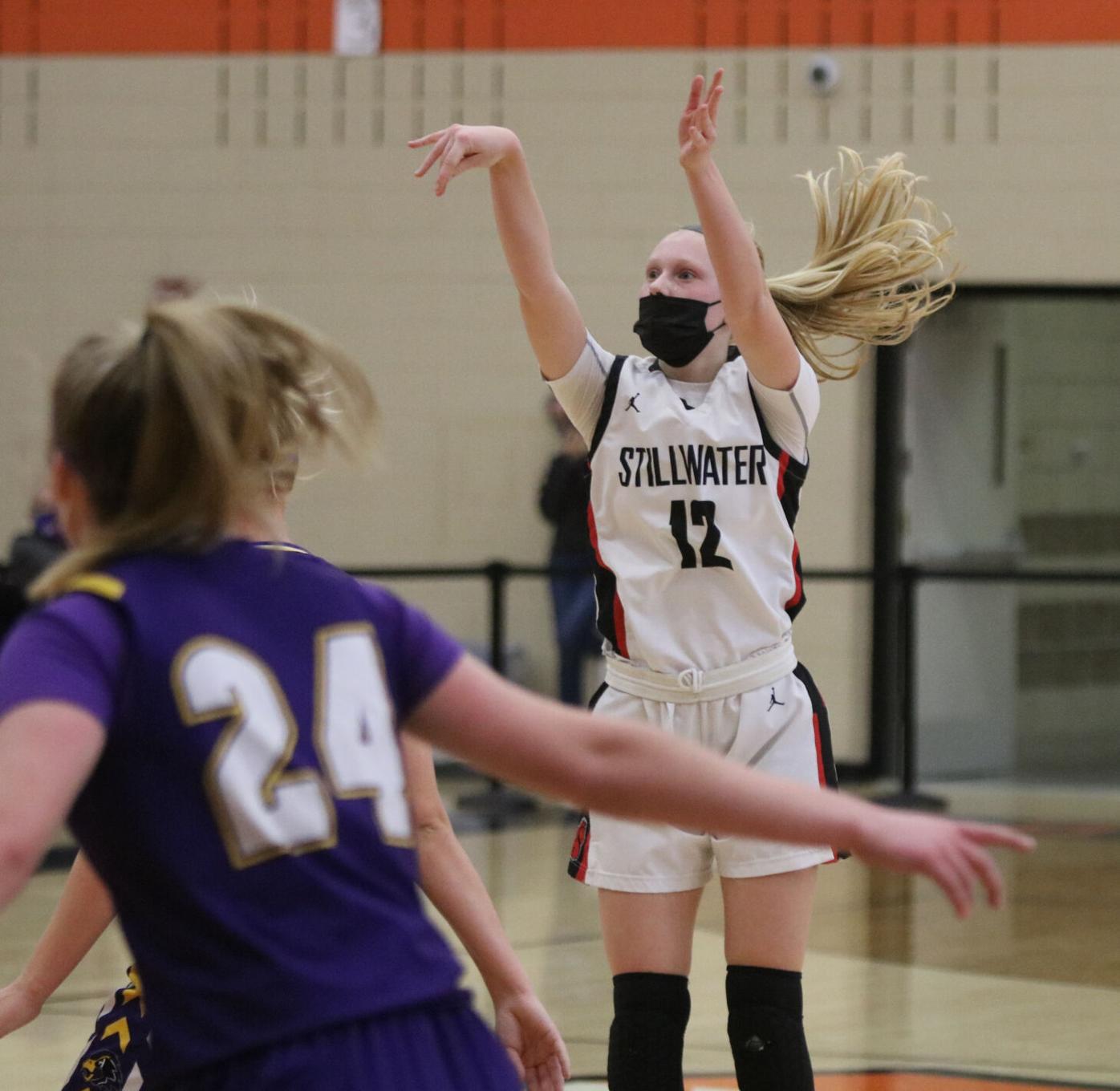 Amber Scalia is cut off on a drive to the basket during the second half of Stillwater’s Class AAAA state quarterfinal game against Chaska on Tuesday, March 30 at Osseo High School. (Gazette staff photo by Stuart Groskreutz)

OSSEO — In a battle of unbeatens, it was Chaska which emerged unscathed following a 75-57 victory over Stillwater in the quarterfinals of the Class AAAA girls basketball state tournament on Tuesday, March 30 at Osseo High School.

The Hawks (16-0) were unfazed by Stillwater’s pressure defense and efficient in the half-court while ending the Ponies season-long winning streak at 21 games.

Chaska’s reward is a semifinal berth against 2019 state champion and undefeated Hopkins (16-0), which cruised past Forest Lake 76-44 in the quarterfinals at East Ridge High School. It was the 78th straight victory for the Royals, who tied the state record for consecutive wins set by Fosston from 1999 to 2002.

The other semifinal features Centennial (21-1) vs. Rosemount (19-3). The state finals are slated for Friday, April 9 at the Target Center.

Three of the four teams in Stillwater’s half of the draw were unbeaten, so the Ponies knew they drew a tough assignment in Chaska. Previously undefeated Farmington (21-1) was riding a 33-game winning streak and received the top seed in the south, but the Tigers were upset 52-44 by Rosemount..

“I knew they were the next best team (behind top-seeded Hopkins),” Ponies coach Willie Taylor said of Chaska. “They way they played tonight, they are the second-best team in the state.”

The Hawks are led by junior post player Mallory Heyer, who Stillwater limited to around her season average with 19 points.

The Ponies, however, had no answer for sophomore guard Kennedy Sanders, who scored in a variety of ways while pouring in a season-high 31 points. Her speed also mitigated Stillwater’s press throughout the game.

“I don’t think we played bad, but they took us out of our offense,” Taylor said. “That’s just the other team doing a good job.”

After shooting poorly in an overtime victory over East Ridge in the Section 4AAAA finals — which was the first time Stillwater’s margin of victory was less than 15 points this season — the Ponies started strong against the Hawks.

Stillwater jumped out to a 13-4 lead, but the Hawks responded with a 13-2 run to pull in front 17-15 midway through the first half. It remained tight until Chaska closed out the first half on a 16-7 run to build a 36-27 halftime lead.

One of key turning points in the first half came when Stillwater post player Lizzie Holder picked up her second foul less than three minutes into the game, which kept her on the bench until the second half.

“I felt great going into halftime,” Taylor said. “We were down, but we had arguably our best inside defender sitting on the bench and they’ve got a Gophers commit out there and we were still within nine. I thought we were in good shape.”

Even with Holder back on the court after intermission, the Hawks started the second half on an 8-1 run to quickly extend their lead to 44-28. Stillwater did not relent, climbing back to trail by just seven (47-40) with 13 minutes remaining. But Chaska had the answer each time, whether it was Heyer for an easy bucket inside or Sanders adding to the 18 points she scored in the second half.

“These are good kids and I knew they weren’t going to give up,” Taylor said. “They’re always going to play hard. We were only down eight with three minutes and we had the ball so we were in good shape. I thought we’ve got a chance here, but they got a blocked shot and got a score and it was game over.”

“Lexi Karlen showed some growth today,” Taylor said. “She played very well and she was not afraid of their big girls at all. That’s something we can take into next year.”

Alexis Pratt sparked Stillwater early with nine first-half points, but was limited to just two points in the second half to finish with a season-low 11 points.

Chaska swarmed Pratt throughout the game, often with two and three defenders as she tried to the drive to the basket.

Taylor had not peeked at the stats yet, but acknowledged the Ponies committed too many turnovers while unable to disrupt Chaska with their pressure.

“I think it’s going to be higher than I want it,” Taylor said of the turnovers. “They’re a good team and their complementary players played well. I’ve done this long enough to know if we did something and we blew it or choked, but their team is good. When they’re making shots like that there’s no way we were going to beat them tonight, especially without Lizzie in the game.”

Stillwater lost to Hopkins in the state finals two years ago and was stopped by the Royals in the state semifinals before the remainder of the tournament was canceled due to COVID-19 a year ago. Taylor said the Ponies can be content with what they achieved this season after graduating some key performers from a year ago.

“We had a team that last year went through tournament play in our section and ripped everybody by 35 or 40 points,” the coach said. “We came out this year with no Liza Karlen, Grace Cote or Mary Fultz and those are scholarship kids, so we were expecting to lose about four or five games this season. They have so much to be proud of. There’s no way you would have thought last year at this time we’d be 21-0 going into our last game, there’s no way.

“I think the biggest thing we had was our team game was really good all year long. We didn’t have the ball sticking in one hand. We moved the ball around and found open shooters. They enjoyed the game. It was fun. What I’m going to miss about this team and the end of the season is the fun we had before the games, before practices. These kids made it fun and that’s the biggest thing they can do to make this season successful, they enjoyed it.”

With 1,258 points, 1998 Stillwater graduate Alena Martens is the only other player to score 1,000 career points for the Ponies. Amber Scalia could join that group next season as she will enter her senior season with 951 career points.