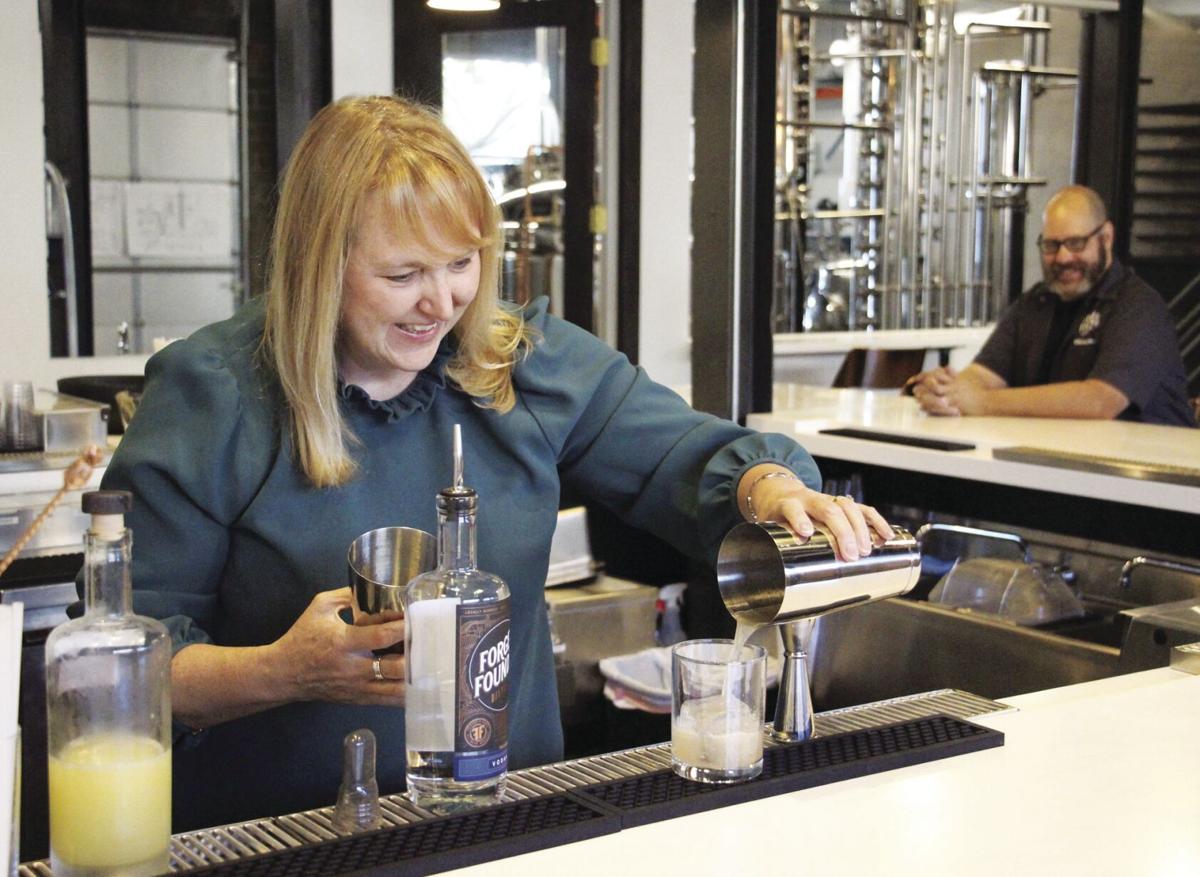 Christie Wanderer of Forge and Foundry Distillery makes an Earl Grey Milk Punch with their own brand of vodka while Andrew Mosiman sits at the tasting room bar. (Photo by Stuart Groskreutz) 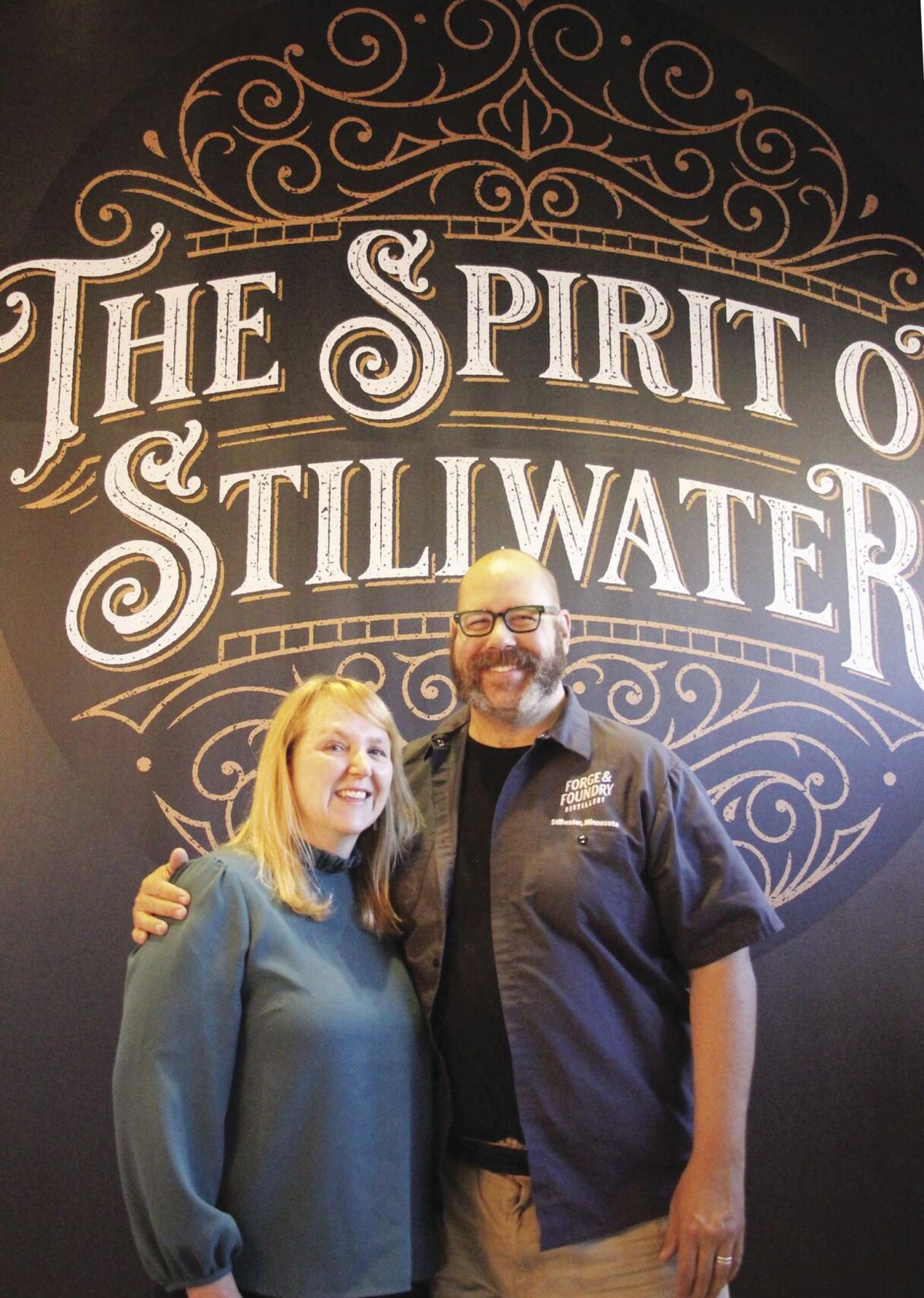 Christie Wanderer and Andrew Mosiman are preparing to open Forge and Foundry, a new distillery in downtown Stillwater. (Photo by Stuart Groskreutz)

Christie Wanderer of Forge and Foundry Distillery makes an Earl Grey Milk Punch with their own brand of vodka while Andrew Mosiman sits at the tasting room bar. (Photo by Stuart Groskreutz)

Christie Wanderer and Andrew Mosiman are preparing to open Forge and Foundry, a new distillery in downtown Stillwater. (Photo by Stuart Groskreutz)

At the end of an arduous four-year process to open the business of their dreams, Christie Wanderer and Andrew Mosiman are ready to mark the occasion with a cocktail.

Fortunately for them, they won’t have far to go as they prepare to unveil the Forge and Foundry Distillery in downtown Stillwater.

The couple is planning a mid-August opening.

“Those are the three we’ll start with,” Wanderer said. “We will have a full cocktail room, which means we’re able to create cocktails with spirits we’ve created.

“One of the things we really wanted was to have a stellar cocktail room, because there’s a lot of great places in Stillwater to get hand-crafted cocktails.”

They can sell spirits on site in limited quantities, but expect to have distribution to area liquor stores by this fall.

“Minnesota is a three-tier state so we have to sell to a distributor who sells to liquor stores,” Wanderer said. “We still start distributing in September, but Minnesota law allows us to sell one 375-milliliter bottle per person, per day.”

Forge and Foundry will also offer several non-alcoholic options, including regionally sourced root beer, kombucha and watermelon and pineapple fruit drinks called shrubs. Any of the cocktails on the menu can also be made without alcohol.

Wanderer is a Los Angeles native who met Mosiman, a 1989 Stillwater High School graduate, when he was serving in the navy while stationed in San Diego.

“I graduated from college and he completed his stint in the U.S. Navy,” Wanderer said. “He wanted to come back and 20 years later, here we are.”

“I was born and raised here on the south hill,” Mosiman added. “I wanted to open something in my hometown and I wanted to be downtown. This couldn’t be a better location.”

The couple encountered more disappointment than progress since starting on this journey in 2016. Twice previously they thought they had a suitable location lined up, but those plans fell through each time.

They were ready to commit to another site before Northern Vineyards announced it was closing its cooperative winery last fall after four decades at 223 Main St. N., providing an ideal landing spot.

There are plenty of buildings and frequent turnover in the historic downtown district, but few capable of accommodating a distillery.

“He wanted to open in downtown Stillwater, but a lot of the historical buildings have wood floors and basements and a lot of our equipment is heavy and large,” Wanderer said. “We needed big ceiling height and struggled to find a location where it would work out.”

“I’m very happy with my work space back there, and you can see every piece of it,” added Mosiman, who is the head distiller.

The upstairs area provides space to host events or private parties and leads to a deck that offers wide ranging views of the St. Croix River.

“It just feels very serendipitous that we ended up in this building,” Wanderer said. “The whole process has taken four years and a lot obstacles and hurdles to get open. We felt very good until COVID hit.”

The pandemic led to some equipment delays that pushed back the opening, but getting involved in a massive renovation has helped pass the time.

“It was nice to have a project,” Mosiman said.

Wanderer and Mosiman used a general contractor, but have also tackled much of the work themselves — including contributions from their 11-year-old twin boys.

“We could self isolate in here,” said Wanderer, who also works as the creative director for a medical manufacturing company in Wisconsin. “We spent most of our quarantine down here. We did have to put quite a bit into the building. People will be surprised. It doesn’t look very much like it did. We remodeled a lot.”

The cocktail room is bright and spacious, even more so that previously envisioned in order to abide by social distancing guidelines. Wanderer said the letters in their logo also resemble the feel of the place.

Family has always been part of the equation.

“About five years ago when the kids went back to school, he wanted to do something different,” Wanderer said. “He took a part-time retail job, just to do something which allowed him flexibility to be home with them after school. He had brewing experience and was interested in doing that, but looked at the market and said what else can we do?”

They’ve always enjoyed visiting distilleries and started investigating and researching it as a potential business opportunity. Even with that all the homework, they didn’t anticipate some of the challenges they encountered along the way.

They placed a deposit for equipment at one point, but it was never delivered after an Idaho company declared bankruptcy. Finding a lender that was comfortable with their venture was also not easy.

“There were points, I did (wonder if it would happen),” Wanderer said. “We were working with one bank and were very close to signing a lease on a building and they ended up calling us and saying we’re going to pass. Luckily we found a bank that really believed in us and has stuck by us, because it’s not an easy process. There are a lot of regulations that go into opening a distillery and finding a bank that can kind of do it. It’s not cookie-cutter. They know what a pizza shop looks like, but there aren’t many distilleries out there and most haven’t worked with a distillery.

“I’m pretty determined. I always felt this was a really good thing and I really believed it would do well in Stillwater. There were plenty of hurdles and times we wanted to throw in the towel. We got turned down for locations or from a bank, but we were persistent. I think it’s going to work out.”