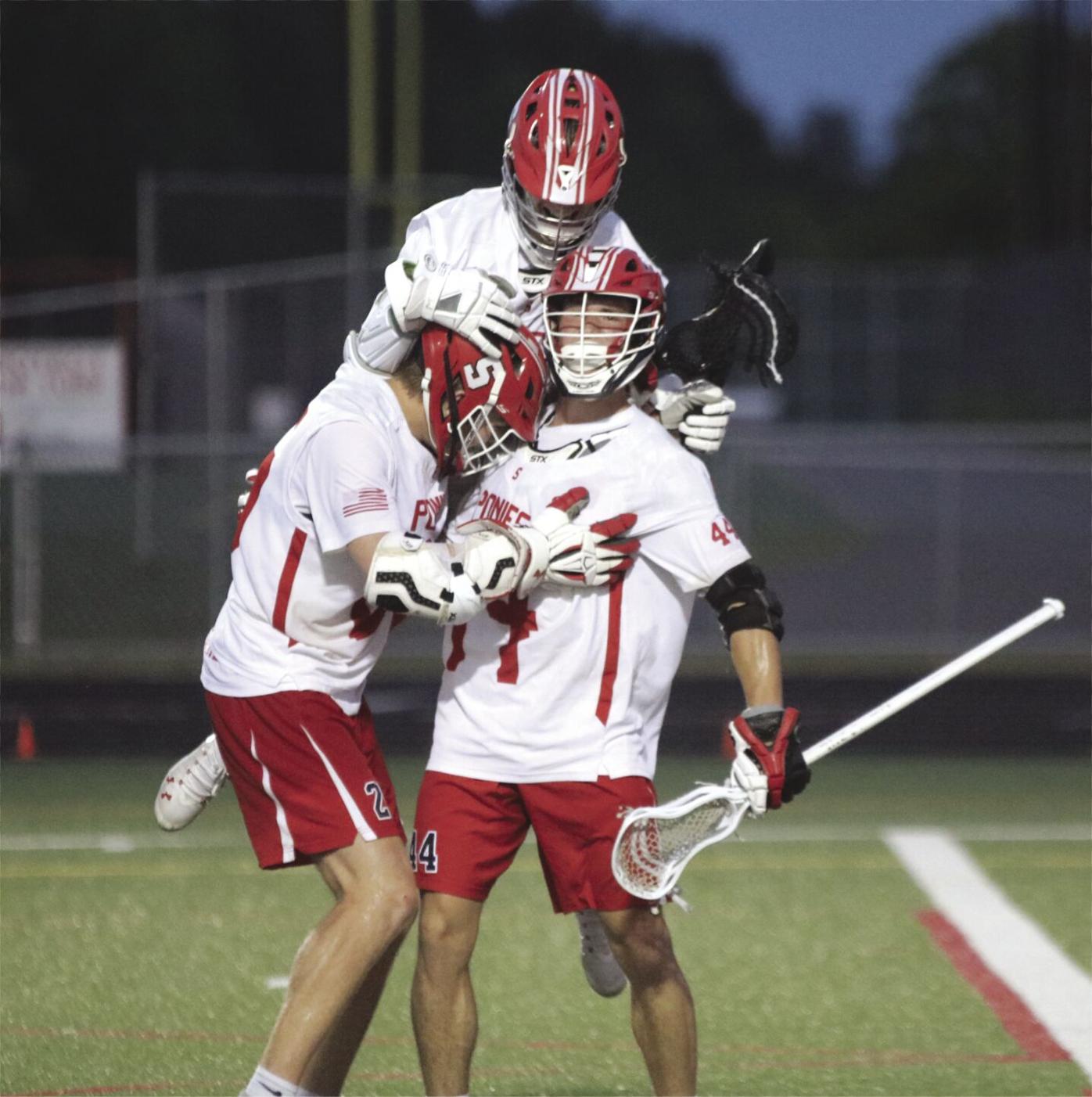 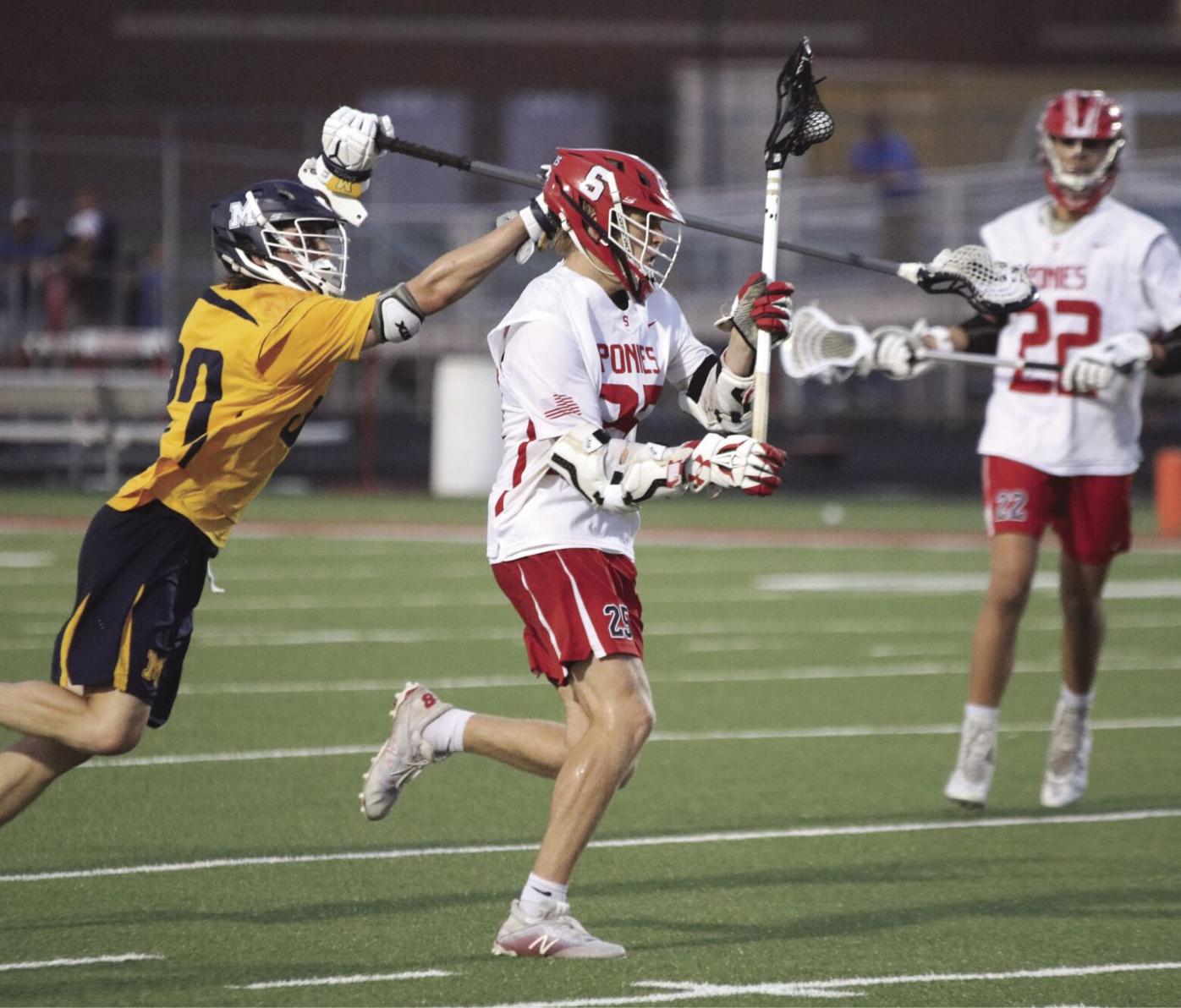 Above, Tomas Anderson charges past a Mahtomedi defender towards the net during the fourth quarter. 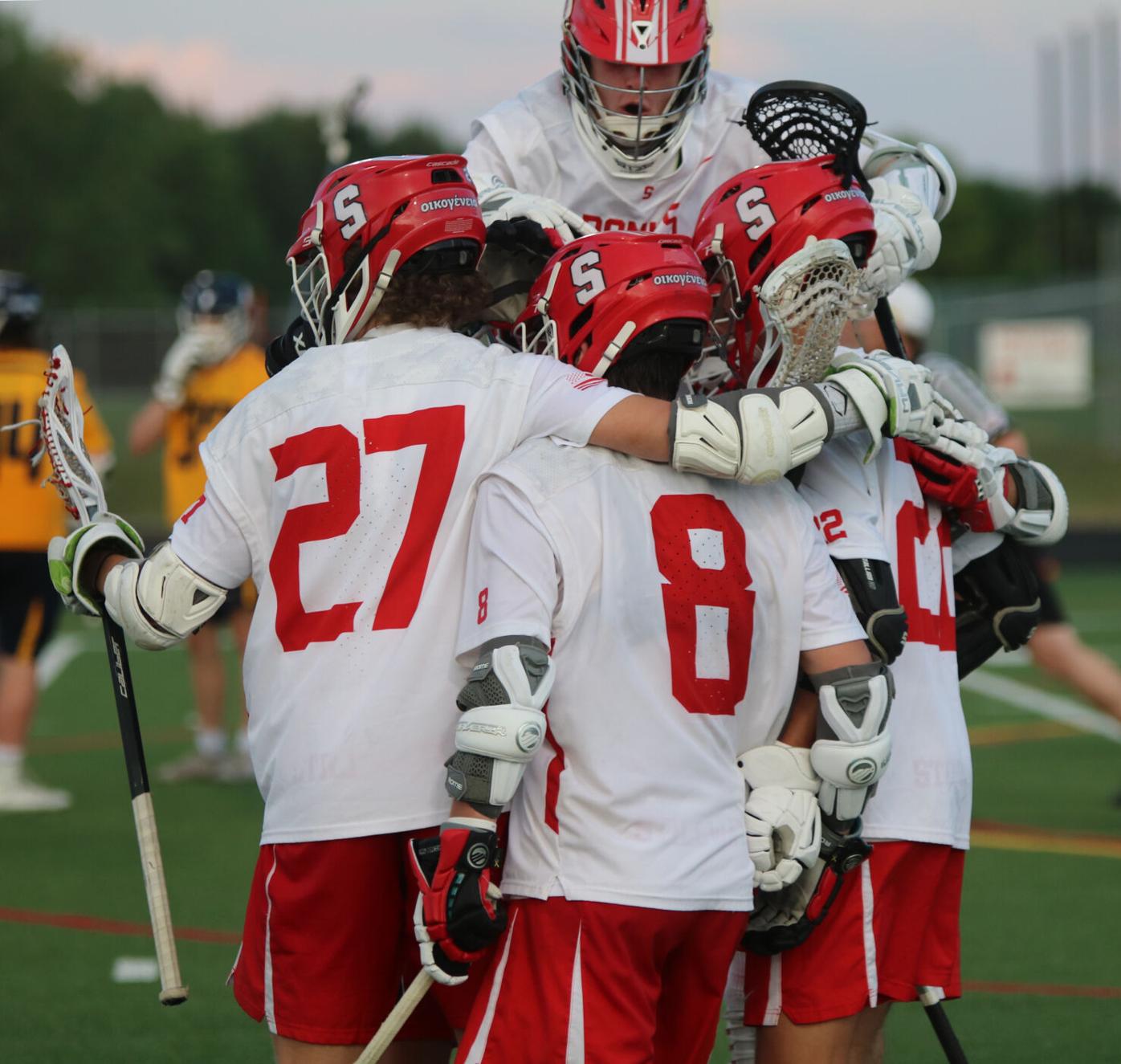 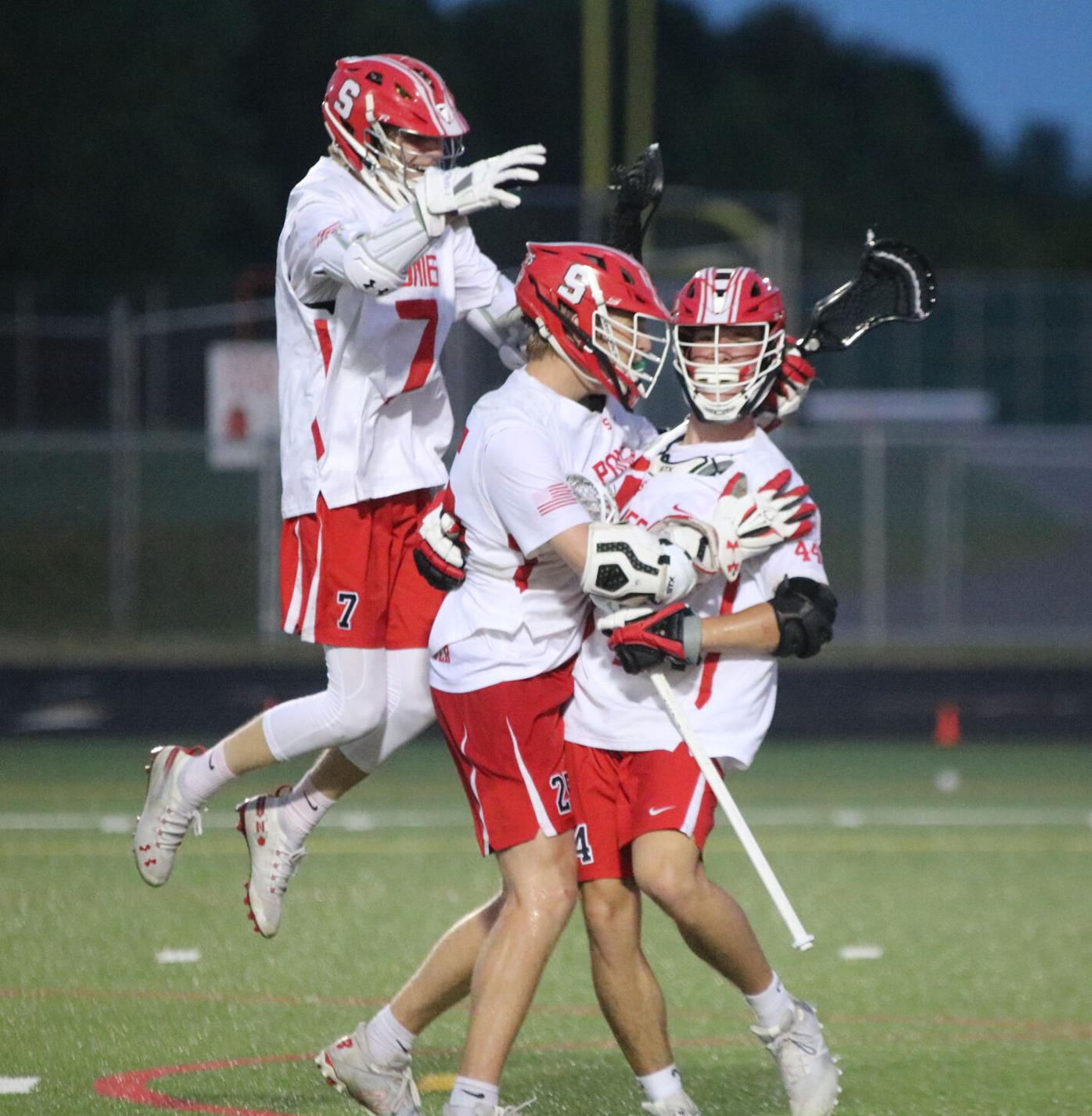 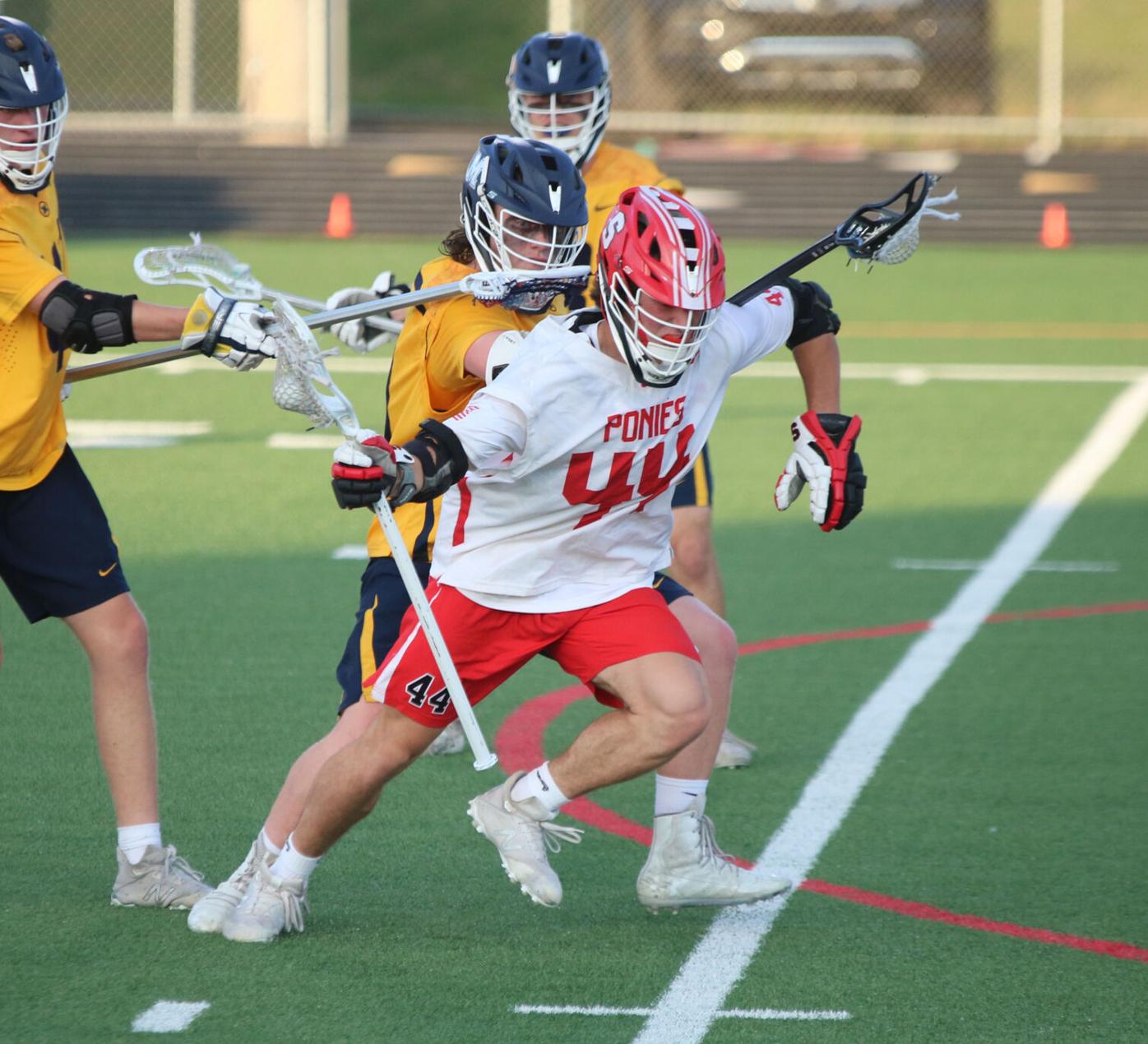 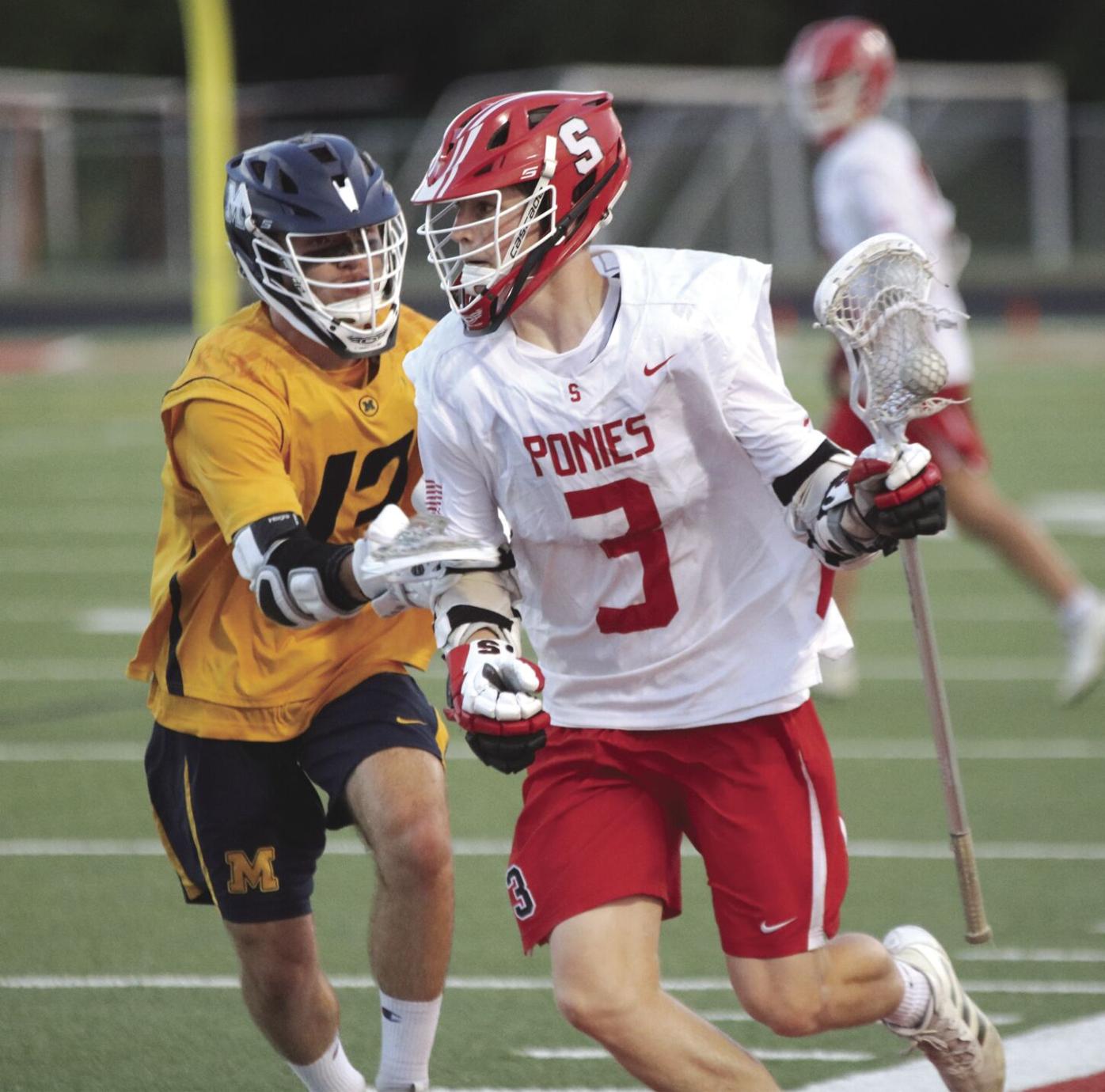 Owen Grau is tracked by a Mahtomedi player. 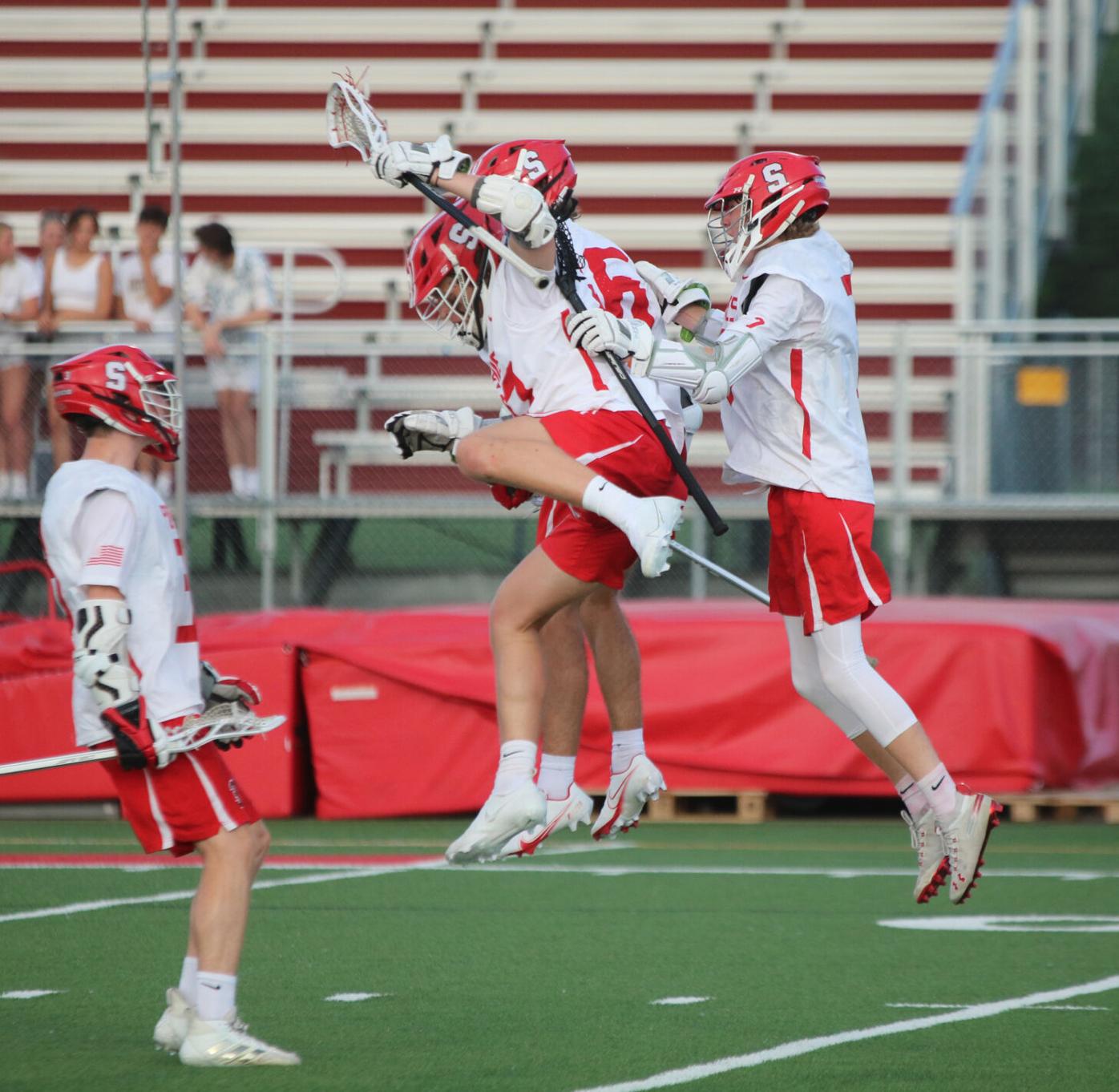 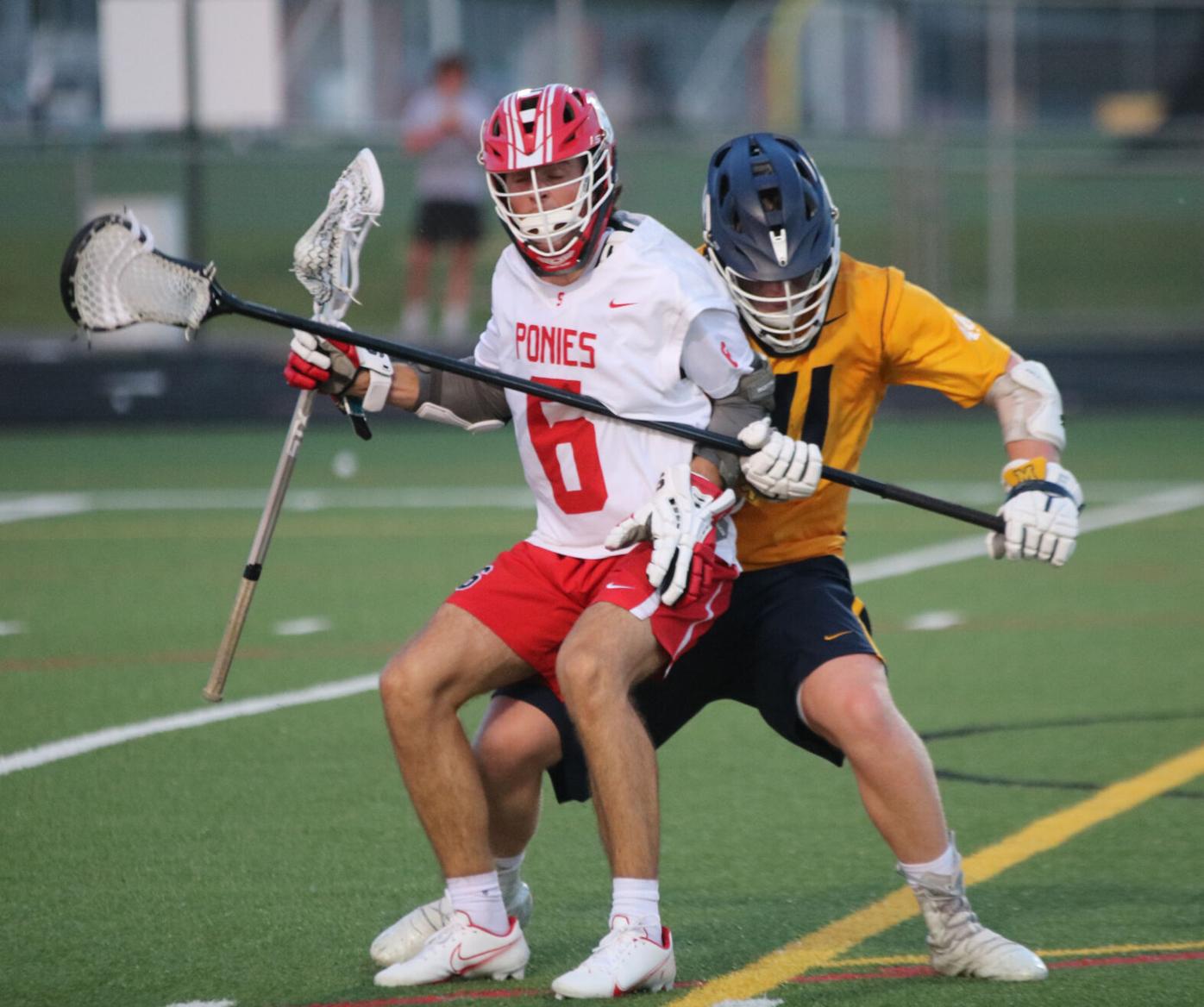 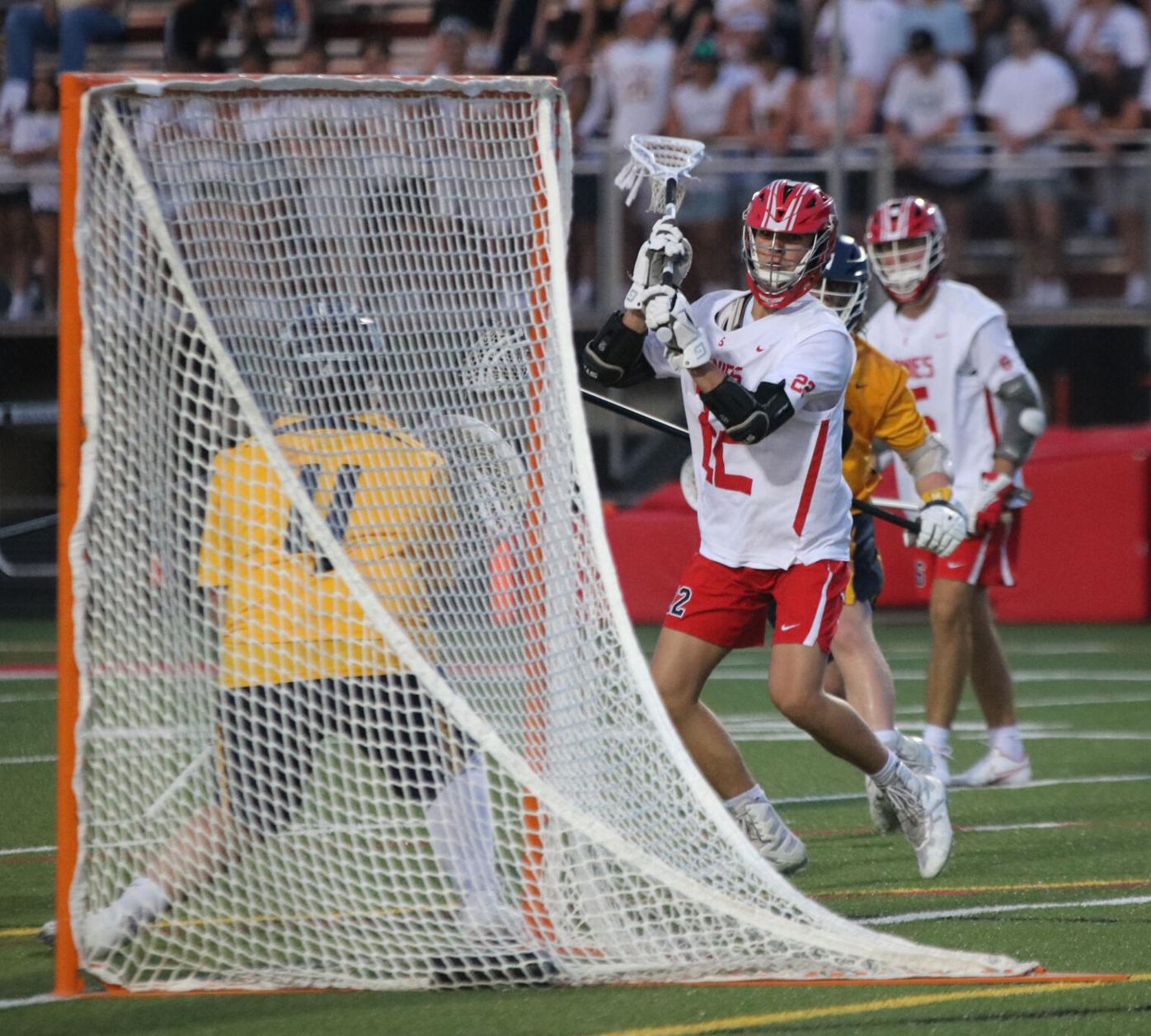 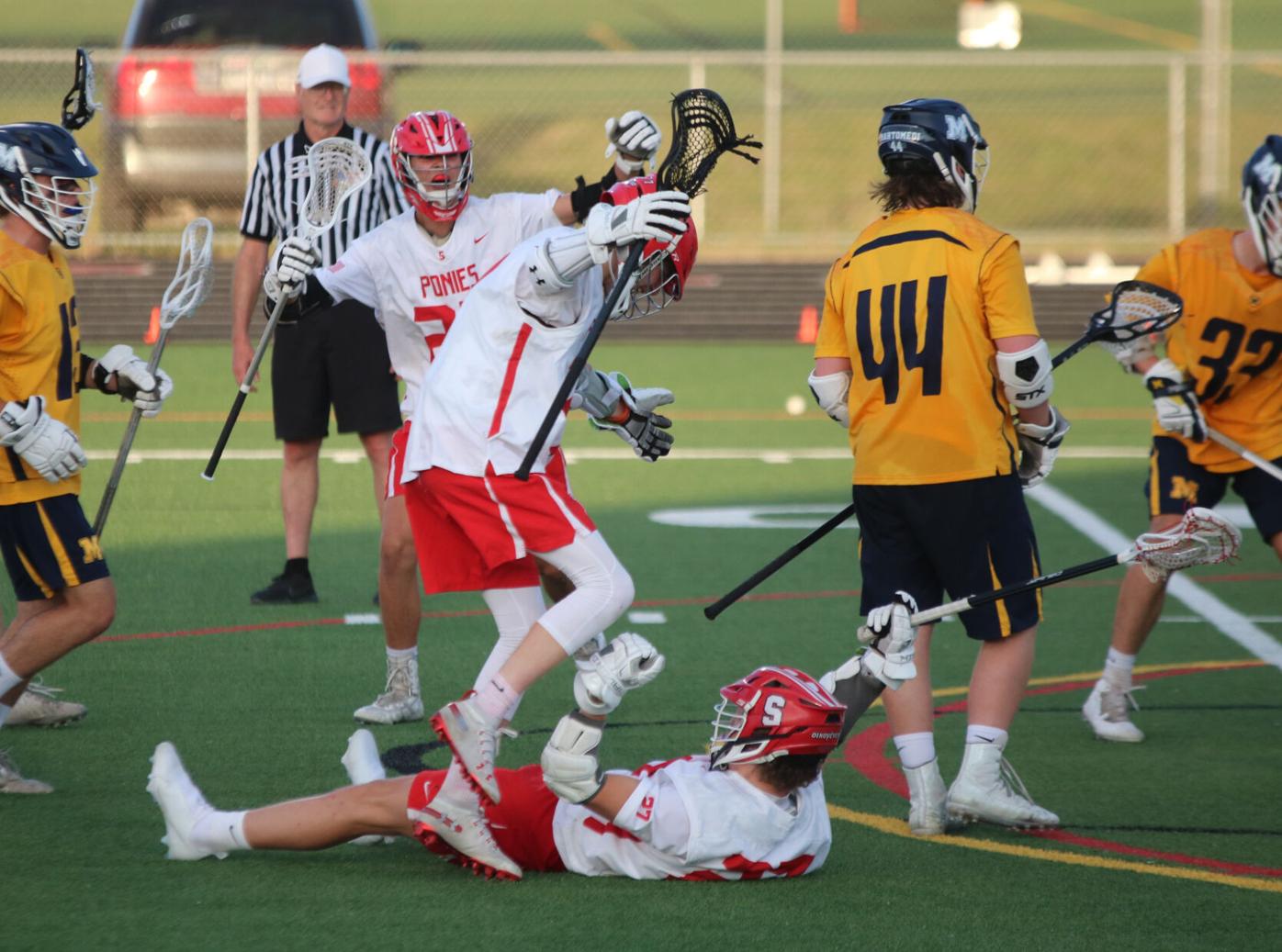 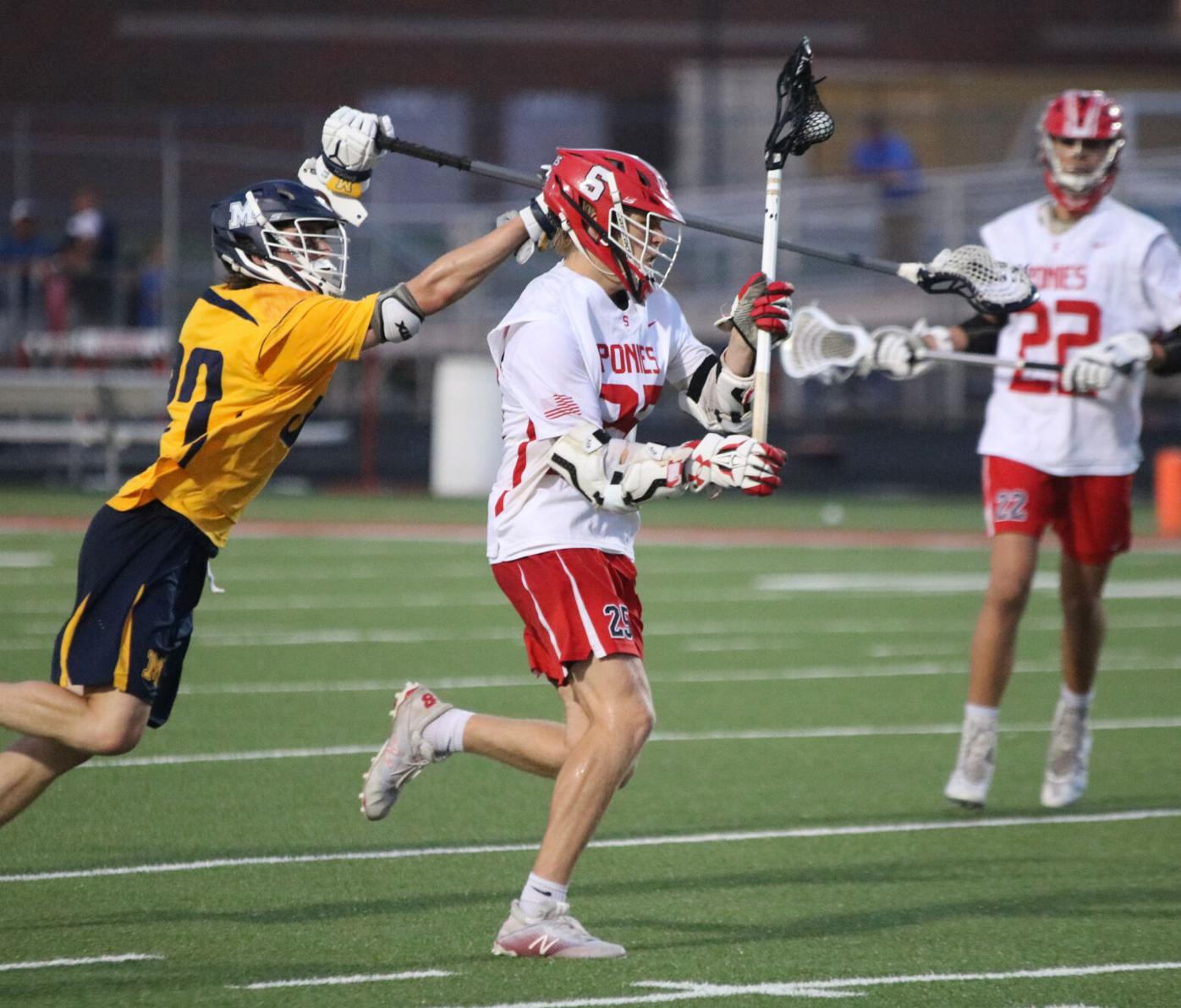 Tomas Anderson charges past a Mahtomedi defender towards the net during the fourth quarter. 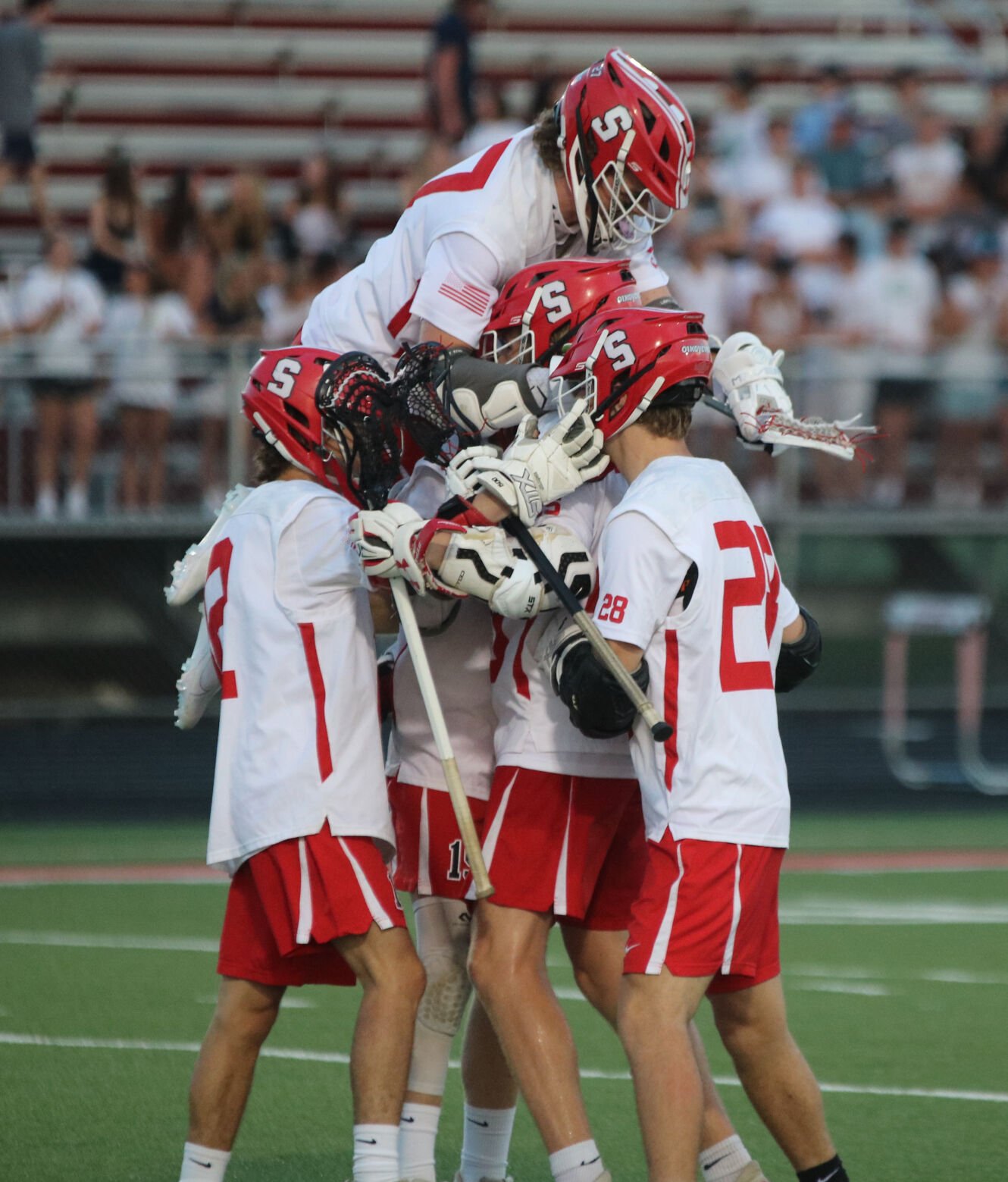 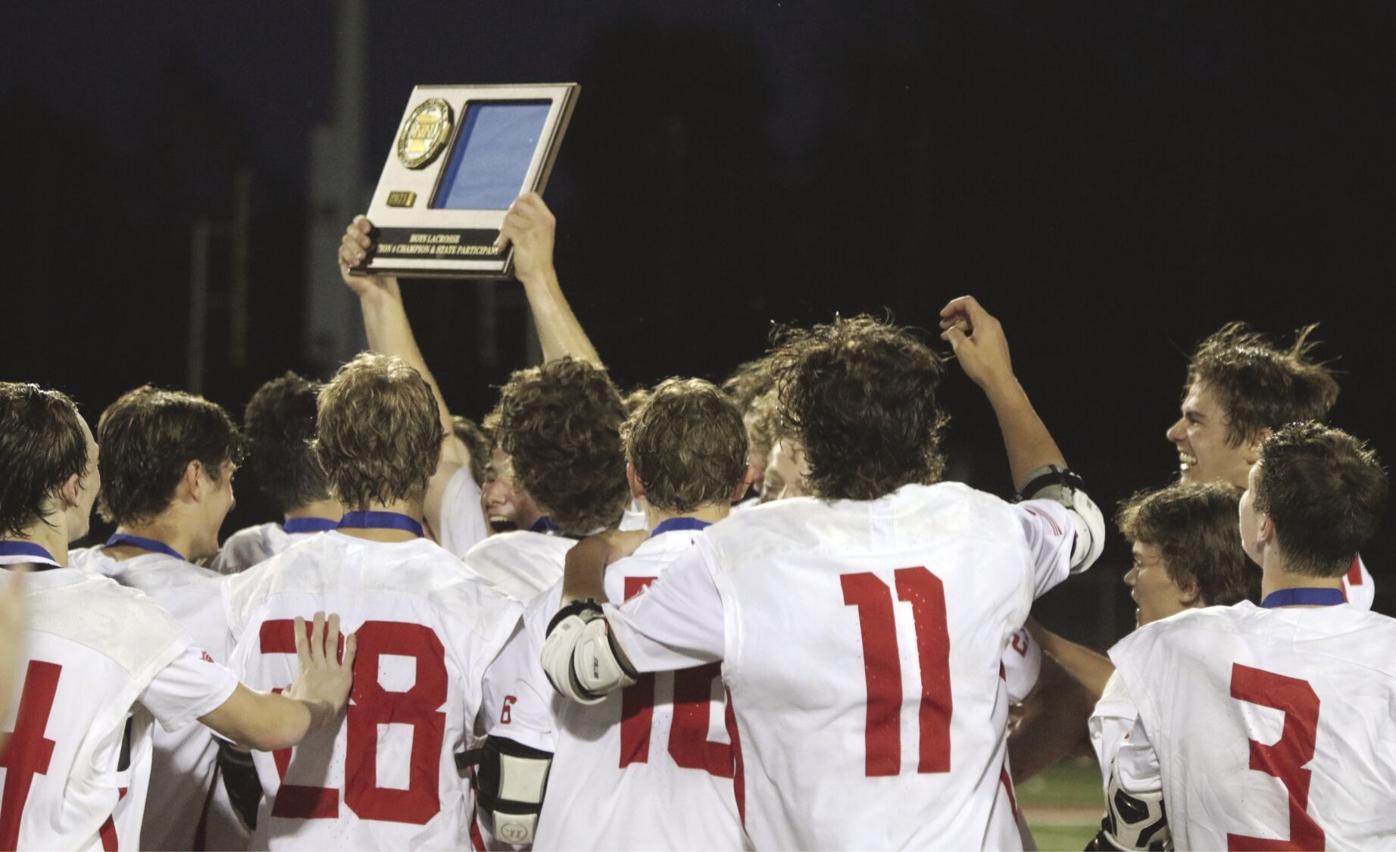 Above, Tomas Anderson charges past a Mahtomedi defender towards the net during the fourth quarter.

Owen Grau is tracked by a Mahtomedi player.

Tomas Anderson charges past a Mahtomedi defender towards the net during the fourth quarter.

OAK PARK HEIGHTS — The Stillwater boys lacrosse team has been playing with purpose all season. In the postseason, the Ponies took a slightly different approach before earning a celebration that was more than two years in the making after defeating Mahtomedi 14-5 to capture the Section 4 championship on Wednesday, June 9 at Stillwater Area High School.

It is the first-ever section championship for the Stillwater program, which held its inaugural MSHSL season in 2008. But it wasn’t just this year’s team members involved in the post-game festivities as several of last year’s graduates who had their season canceled due to COVID-19 were on hand to see the Ponies earn that elusive state bid.

“I yelled up to the stands and made sure they came down here,” said senior goaltender Gunner Arens. “I wanted them to be a part of this and made sure to get them in the picture with the trophy because obviously it should have been two years in a row.”

Last year’s team featured 14 returning seniors and high expectations. This year’s cast was playing for them as well, but Stillwater coach Peter Flock didn’t want to add too much pressure to already weighty expectations.

“It feels like it was a long time coming,” Flock said. “Yeah, it’s definitely a little bit of weight off the shoulders, but we kind of as a team started to talk about that we wanted to stop thinking about the years prior. We kind of just had the mindset that it was just another game and it didn’t matter who the opponent was or what the game was, it was just 48 minutes of a lacrosse game.

“We kind of had that message to honor the alumni, but closer to this game we peeled back from that and realized there’s no curse, it’s just a lacrosse game and that’s all it is. It’s two new teams and whatever happened before this with those two teams doesn’t matter.”

Mahtomedi had won the section five of the last six seasons and the Ponies were eliminated by the eventual section champion in 10 of the last 11 seasons.

“It feels amazing,” Arens said. “This whole season we’ve just preaching on being different and being better than past generations. Especially from last year we had really high hopes coming off the 15-0 season from 2019 and we really thought we should have gone all the way then and Mahtomedi beat us then. This year we just waited 765 days to bring it back to them and that’s what we did.”

Stillwater opened up a 3-1 lead after the first quarter, but the second-seeded Zephyrs (10-6) evened the score at 4-all with a little over three minutes remaining in the first half.

That was when the Ponies seized control while scoring three straight goals before halftime. Sammy Ness started the momentum swing with a goal with about three minutes remaining and Carter Bies and Tommy Lindeberg each scored in the last 35 seconds of the half to build a 7-4 lead.

“That was huge because we had just fought off a two minute penalty and we just allowed one goal,” Flock said. “It felt like it was going to stay a back-and-forth game, but we just went on a run and from that point on we never looked back. Without that run, I would have predicted it would have been a close game the rest of the way, but we just kept going.”

Stillwater outscored the Zephyrs 7-1 in the second half.

Bies and Tomas Anderson each finished with three goals to lead the Ponies, who also received two goals apiece from Ness and Ben Shockency.

“I would say in this game, both sides of the field showed up and played really big,” Flock said. “We’ve had games where the offense has played well and the defense has struggled, but most of the time it’s the defense holding up the offense. We’ve always been kind of lower on the goals for average, but we just decided we’re going to play a full all-around game. It seemed like our turnovers were down and we were winning the ground ball battles. We just played a really simple, smart game and frustrated their big guys on the offensive side. Everybody played well.”

With so much of last year’s team consisting of seniors, it also created a situation with a largely inexperienced squad this year.

“I think Isaac Albers was a manager on the sideline and I was the only current coach on the sideline in 2018 so we had zero experience playing in a section championship game and Mahtomedi has been there all the time so experience was definitely not on our side,” Flock said. “But this is a group that finds ways to win and it showed up here in the postseason.”

The Ponies, who outscored their three section opponents by a combined 41-11, have continued to show improvement throughout the season.

“We’re just much smarter as a team,” Arens said. “We were lacking that lax IQ at the start of the year because we’re a bunch of athletes and hockey players. We came out here and we played smart, fast, physical lacrosse and that’s what led to the win.

“We’re a super young team. This year we came in, I think we have five or six seniors in our starting lineup. Honestly we had to deal with a bunch of underclassmen and they’ve really stepped up and I’m really proud of them because they won that game for us.”

Owen Knapp led the Zephyrs with three goals, which was just fine with the Ponies.

“We just needed to shut down No. 2 (Levi Lemke) and No. 7 (E.J. Chapentier) and that’s what we did,” Arens said. “They both had one goal each and we made the other players scores goals and led to us winning.”

Stillwater Area High School is the host site for this year’s state tournament, which begins with the quarterfinals on Tuesday, June 15. The semifinals are scheduled for June 17 and the finals are set for June 19. Pairings are expected to be announced on Friday, June 11.

At Oak Park Heights, Alex Corbett supplied two goals to lead a balanced attack as the Ponies dispatched Hill-Murray 7-3 in the Section 4 semifinals on Friday, June 4 at SAHS.

Stillwater led 5-2 at halftime and the Pioneers never seriously threatened after the intermission.

“It was kind of a good game for us, but we weren’t super satisfied with it,” Ponies coach Peter Flock said. “Our defense played well in holding them to three goals, but we definitely left some offense on the table.”