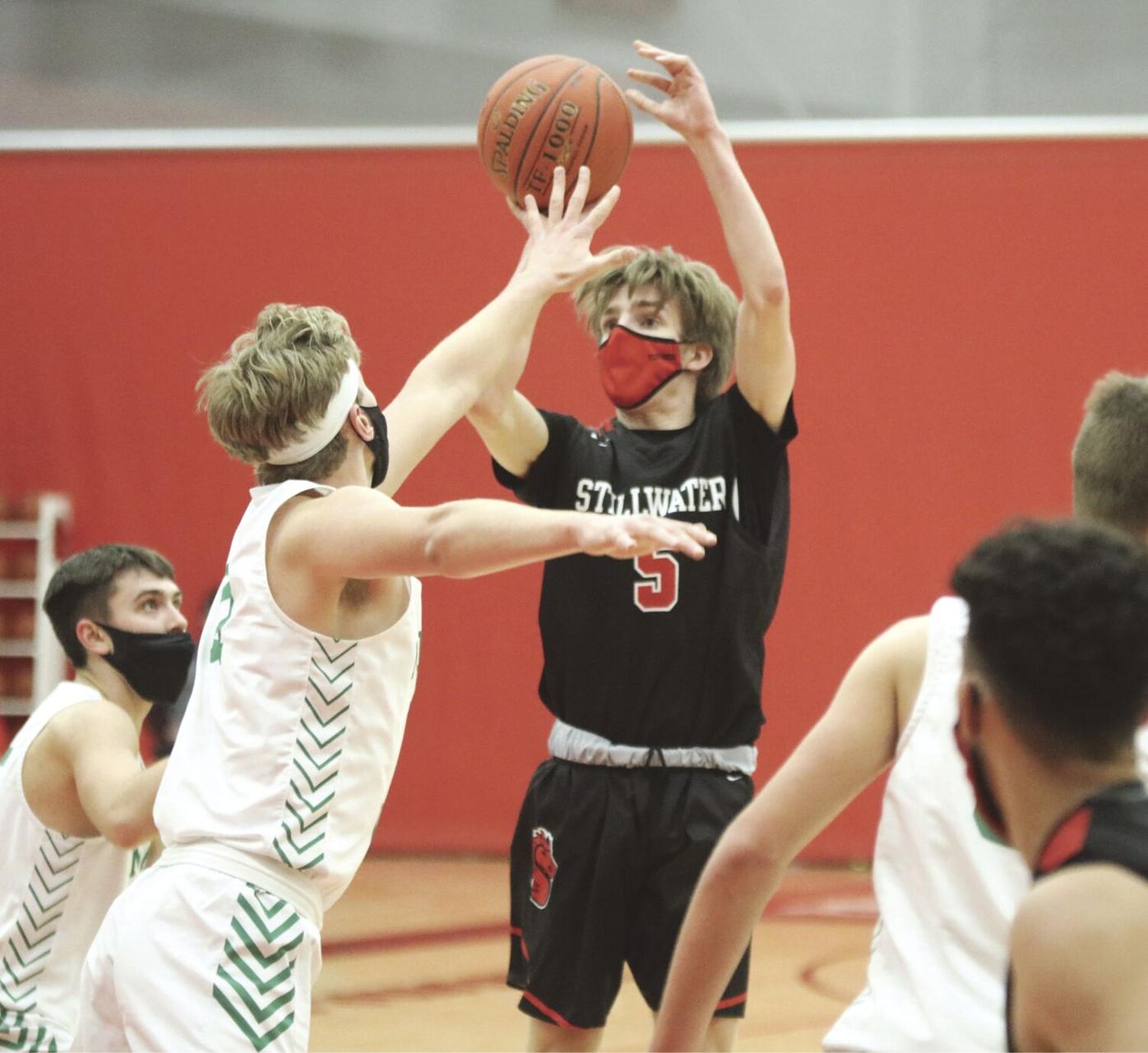 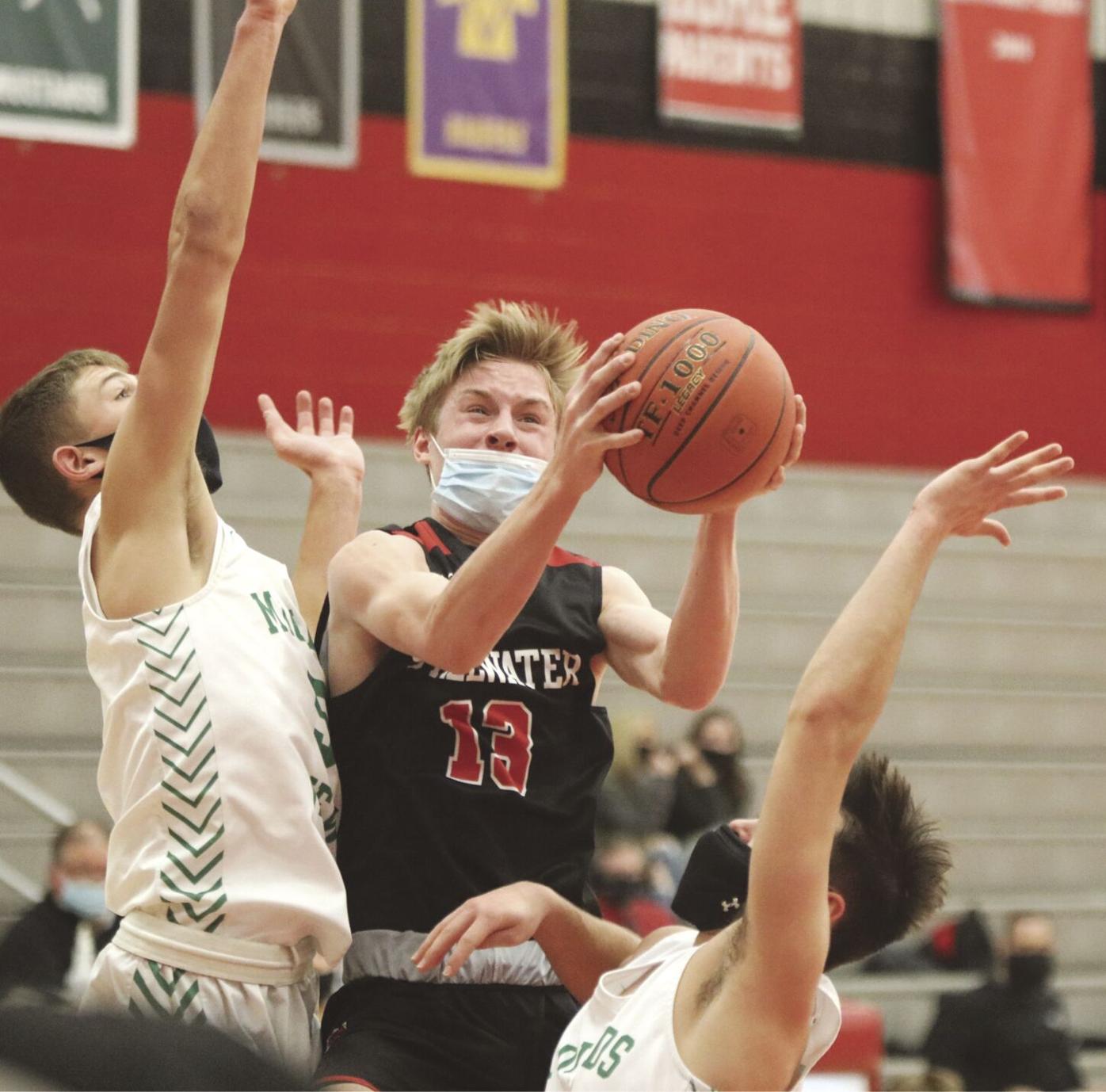 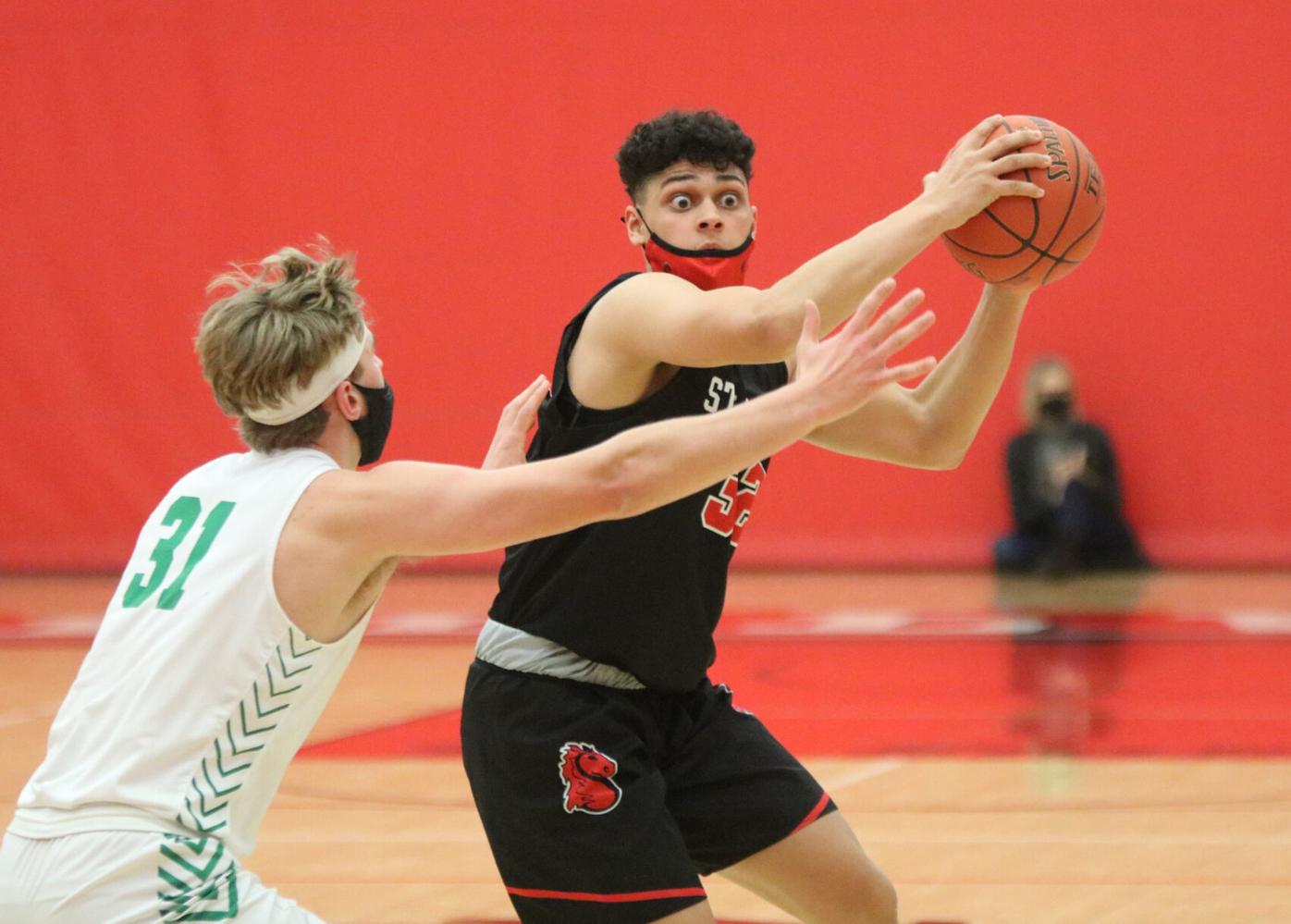 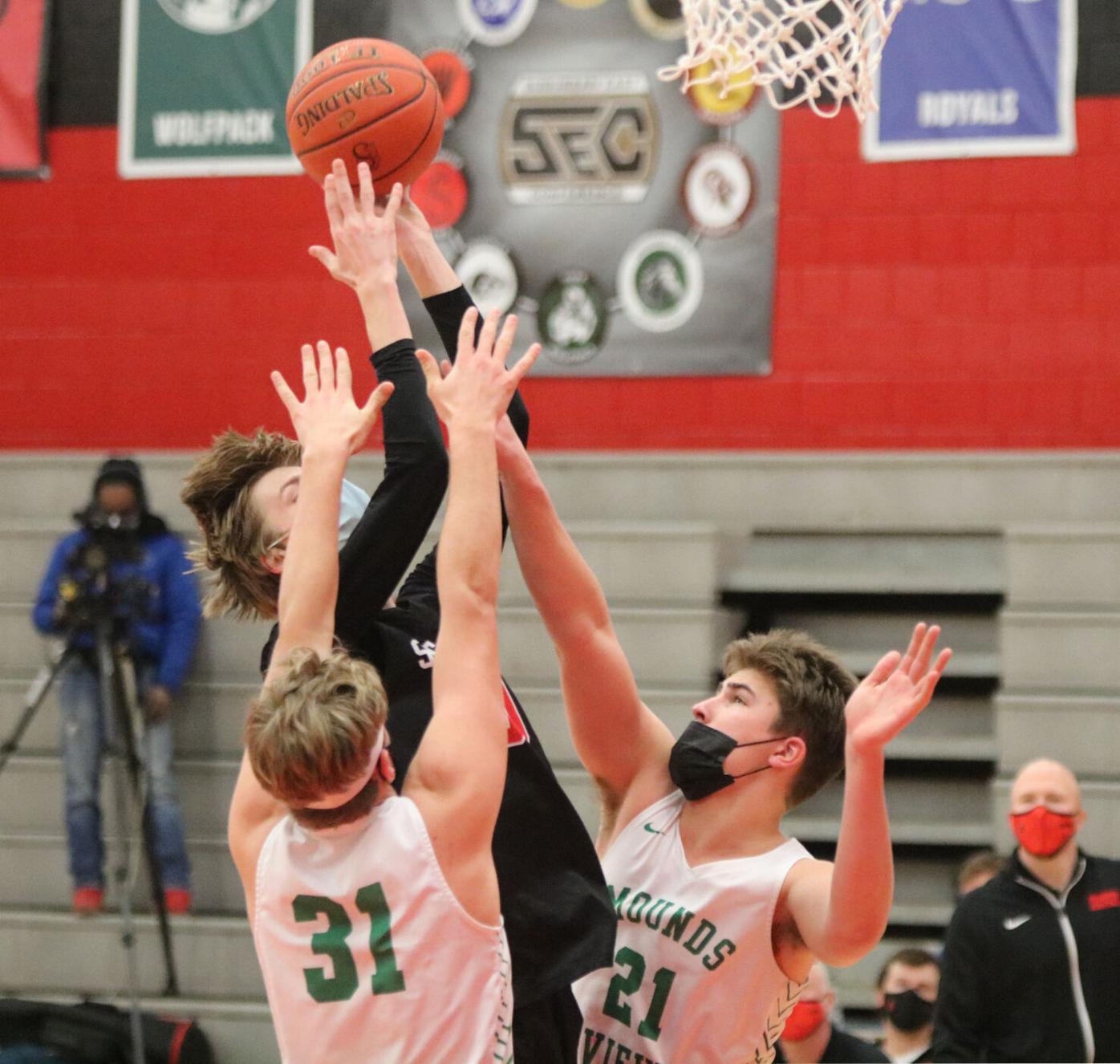 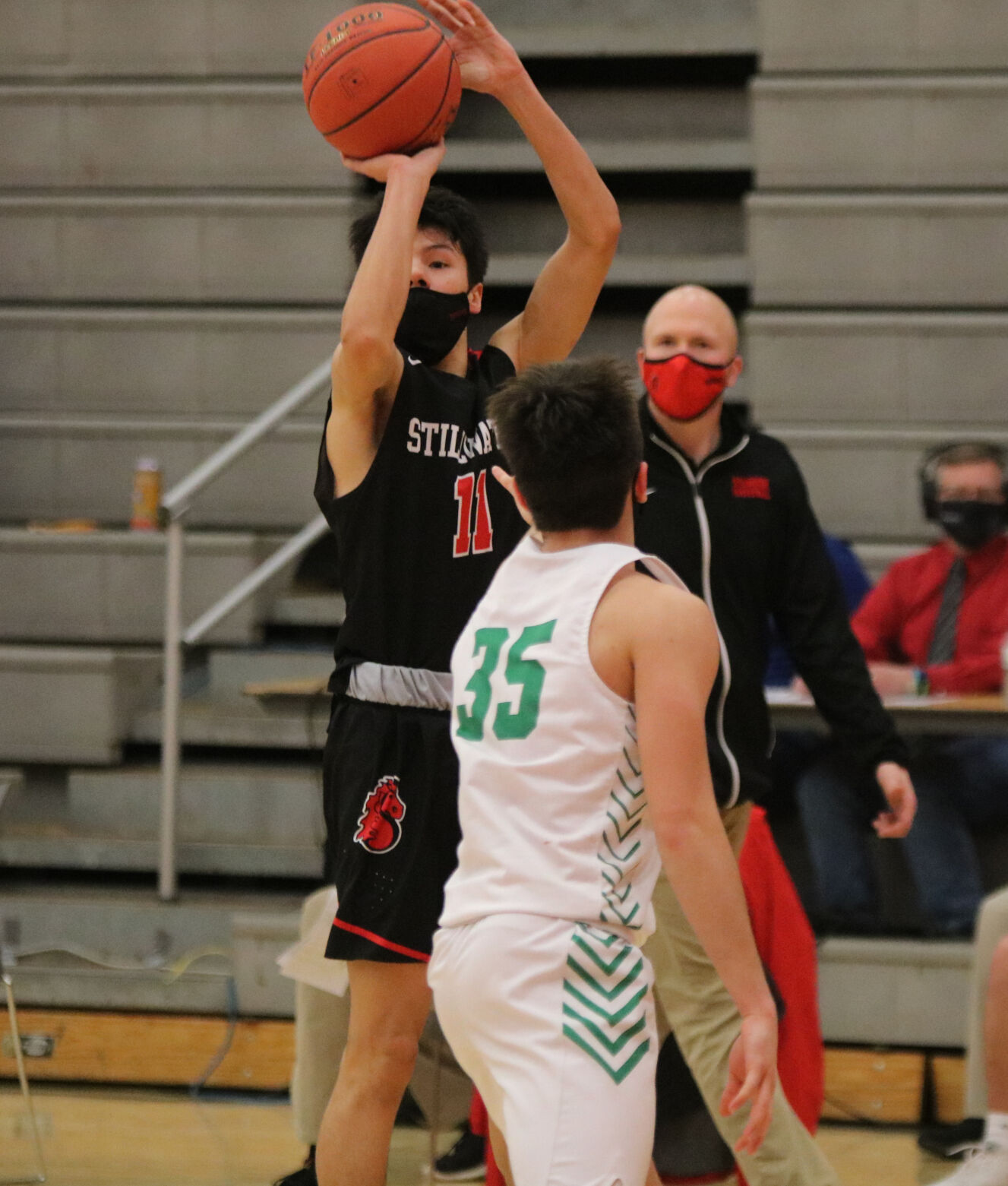 OAK PARK HEIGHTS — Brothers Max and Sam Shikenjanski combined for 43 points, but it wasn’t enough to overtake Suburban East Conference front-runner Mounds View as the Mustangs pulled away for a 74-65 victory over the Ponies on Friday, Feb. 12 at Stillwater Area High School.

The Ponies (2-8 SEC, 2-8) trailed by nine points at halftime, but climbed back to within 38-37 after a 9-1 run to start the second half. Mounds View answered with an 8-1 run for a 46--38 lead with 11 minutes remaining and maintained a similar margin the rest of the way.

“I was pleased with the way our guys competed,” Ponies coach Brady Hannigan said. “They came out confident and ready to go, but we made a lot of mistakes at the end.”

The Mustangs aren’t flashy, but they are balanced and held a significant size advantage over Stillwater. Dylan Wheeler scored 20 points to lead four Mustangs in double figures.

“They’ve got five guys we have to guard and how can score and even a sixth guy off the bench who can score, so that makes it tough,” Hannigan said. “We had a really hard time rebounding. There was a time on the floor where they had at least four inches on every one of our kids.”

Mounds View made 8 of 19 3-pointers (42 percent) and was also sharp at the line while making 18 of 23 free throws. The Mustangs made 10 straight free throws to close out the game, thwarting any comeback hopes for the Ponies.

“They don’t just take three-point shots, they make a lot of 3-pointers and they play solid defense and rebound well,” Hannigan said.

Stillwater’s Max Shikenjanski led all scorers with 23 points while Sam Shikenjanski added a season-high 20 points — more than double his season average — and also pulled down 10 rebounds.

“A double-double, that’s a pretty good night,” Hannigan said. “I would say that was one of his most confident and strongest outings. He was able to be a second scoring threat for us.”

Tyler Tompkins added 14 points for the Ponies, who finished 9 of 13 at the free throw line.

At New Brighton, after a more promising showing against undefeated Mounds View in its previous game, the Ponies fell flat in 47-44 loss to the previously winless Knights on Wednesday, Feb. 17 at Irondale High School.

Stillwater led by as many as six in the first half, but the Knights rallied for a 23-22 lead before the break and then scored five straight points to start the second half. The Ponies stayed within range, but couldn’t pull even.

“We weren’t making any shots and turnovers killed us,” Stillwater coach Brady Hannigan said. “They mixed up their defenses and we were never able to get into a rhythm. We missed a ton of lay-ups and a lot of shots that we should have made.”

“We allowed them to hang around and we gave them confidence tonight,” Hannigan said. “Their confidence expanded as the game went on and we were never able to take control of the game.”

Max Shikenjanski poured in 26 points while Tyler Tompkins chipped in with 10 points. They accounted for 36 of Stillwater’s 44 points in the game.

“We needed anybody to score other than Max,” Hannigan said.