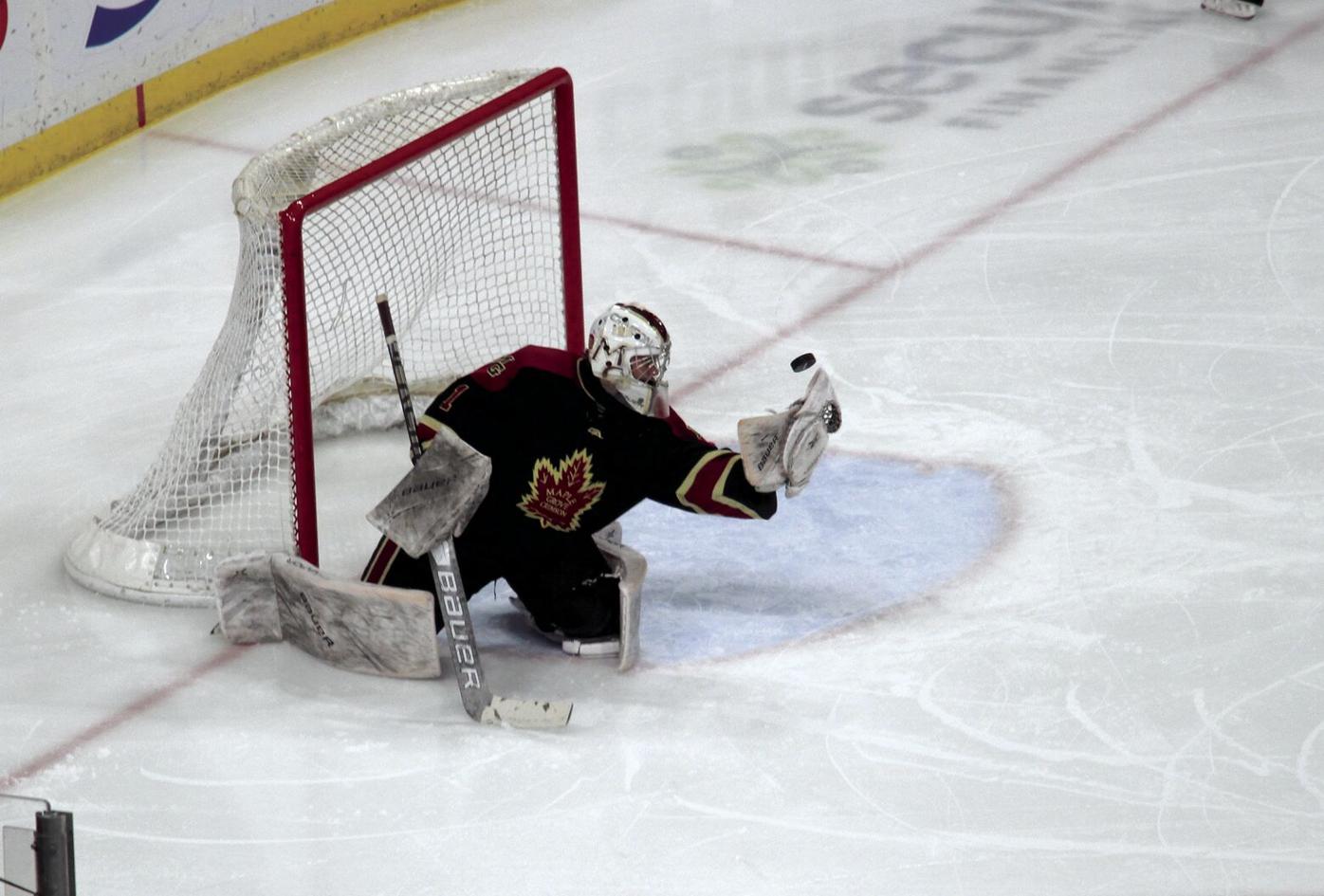 Crimson senior goalie Jack Wieneke grabs the puck in midair against Eden Prairie in the Class 2A semifinals on April 2. Wieneke finished with 31 saves. (Photo by Sam Johnson) 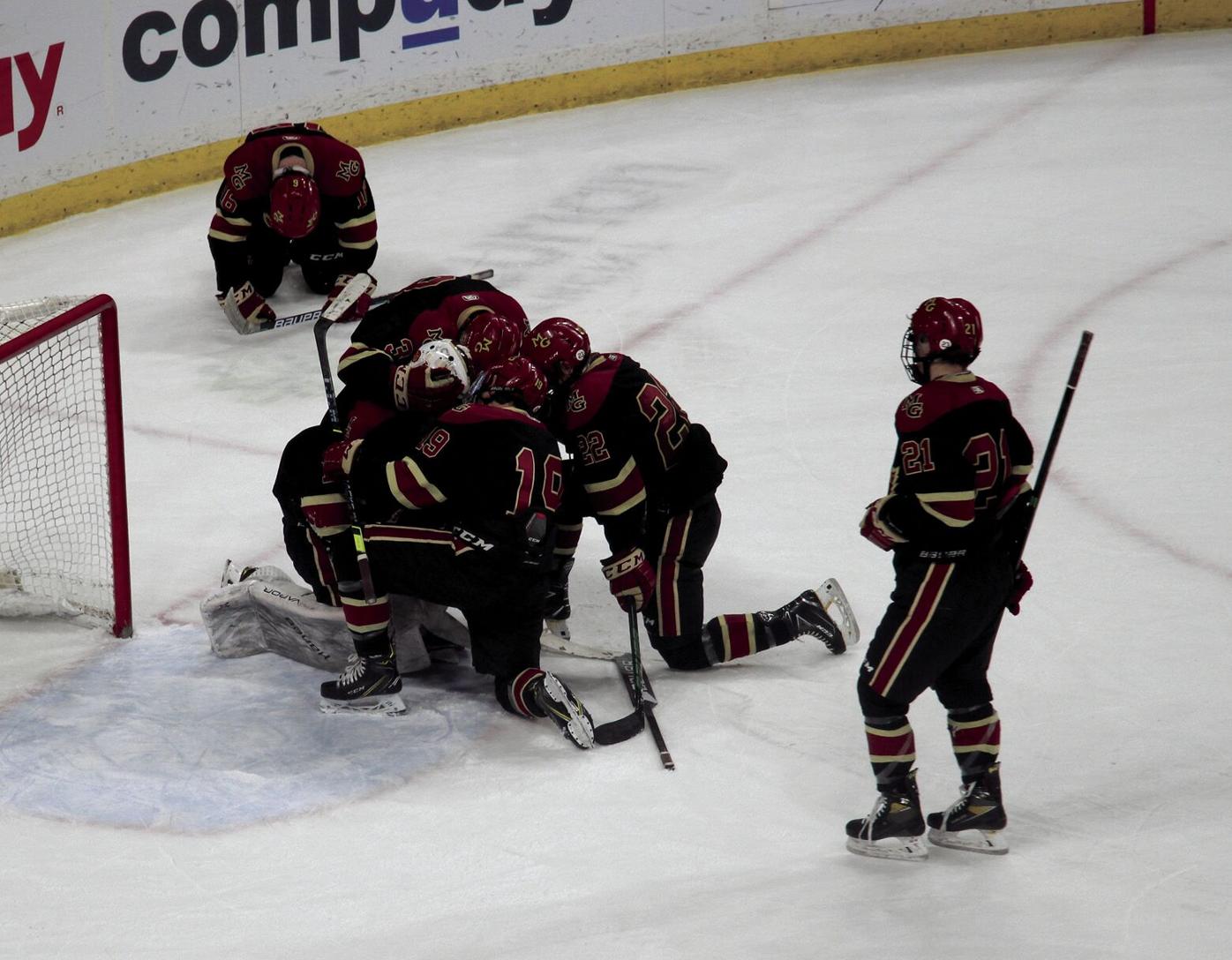 Maple Grove reacts to their 6-5 overtime loss to Eden Prairie in the Class 2A semifinals on April 2. This is the farthest the Crimson have gone in the state tournament in program history. (Photo by Sam Johnson) 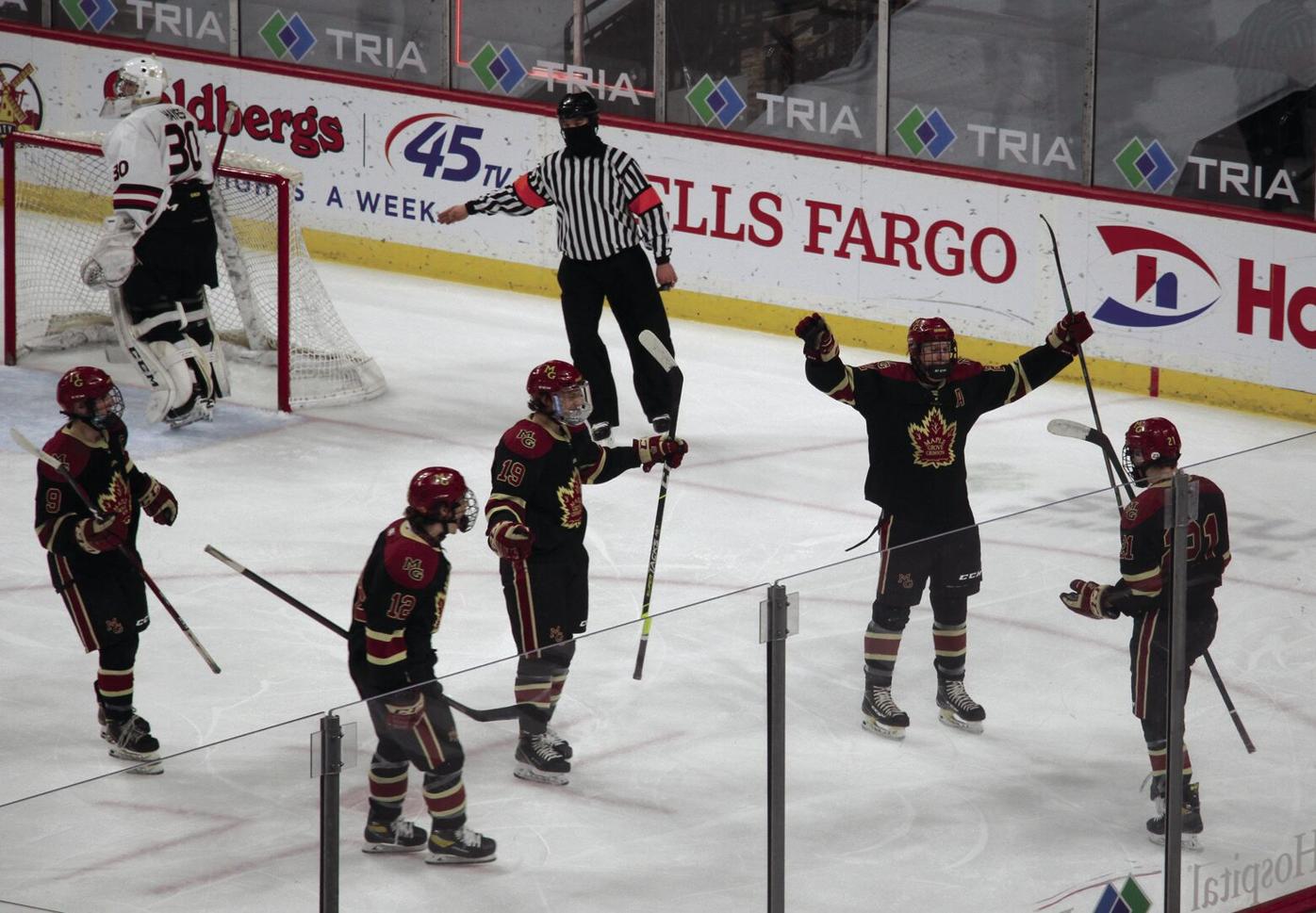 Several Crimson players celebrate a goal from Sam Jacobs against Eden Prairie in the Class 2A semifinals on April 2. Jacobs finished with two goals and two assists, leading the team with four points. (Photo by Sam Johnson)

Crimson senior goalie Jack Wieneke grabs the puck in midair against Eden Prairie in the Class 2A semifinals on April 2. Wieneke finished with 31 saves. (Photo by Sam Johnson)

Maple Grove reacts to their 6-5 overtime loss to Eden Prairie in the Class 2A semifinals on April 2. This is the farthest the Crimson have gone in the state tournament in program history. (Photo by Sam Johnson)

Several Crimson players celebrate a goal from Sam Jacobs against Eden Prairie in the Class 2A semifinals on April 2. Jacobs finished with two goals and two assists, leading the team with four points. (Photo by Sam Johnson)

This is the match up Maple Grove had been waiting for.

For a program that has never reached the state hockey semifinals until this year, a golden opportunity stood in front of them. Eden Prairie, the state runner-up for the last two years, represents the success and consistency that Maple Grove is trying to build. And in this season, they represent almost a carbon copy of each other.

“Both teams have tremendous speed,” Maple Grove head coach Todd Bergland said. “It’s going to be an interesting match up. It is going to be lots of high tempo and free-wheeling.”

Most of these kids have played against each other for many years, up and down the bantam circuit and other youth leagues. But this match up is different. The lights are brighter, the stage is bigger, and each detail of the game is magnified.

Eden Prairie is not new to that magnitude. They are the state runner-up two years in a row and came out with a physical approach against the Crimson in their quest to get over their recent championship hump.

And they got one step closer Friday night, defeating the Crimson 6-5 in a thriller.

At the onset, the Eagles sought out contact but also took the hits from the Crimson, who didn’t back down. “We knew we would have to match that physicality,” Bergland said. “They didn’t back down.”

Midway through the first period, off an Eagles power play, Landen Gunderson found Sam Jacobs in front of the net, and the senior gave the Crimson the first lead of the game. But soon after, Eden Prairie had their own man advantage, and Jackson Blake made quick work of the two minutes, tying the game at 1 with four minutes left in the frame.

The score could have been titled more in the Eagles’ favor had it not been for Crimson goalie Jack Wieneke. The Brimsek Award finalist had several diving saves and glove snags that kept his team even with Eden Prairie.

Throughout the opening period, things were getting chippy. The refs had more separating to do than a Hollywood couple. And that continued into the second period.

Early in the frame, Maple Grove committed a penalty which put the Eagles on the power play, and that’s when they are the most dangerous. Mason Langenbrunner, like his teammate Blake, wasted no time firing a shot past Wieneke to make it 2-1 Eagles.

But shortly after Eden Prairie took the lead, Jacobs scored another power-play goal and the game once again got knotted up.

The 2-2 score carried on to the final period, where every detail is under a heavier magnifying glass. But it didn’t take long for the scoreboard to move. Chris Kernan was in the right place at the right time when the puck deflected off his skate and in the net, giving the Crimson a 3-2 lead.

But just as Eden Prairie did earlier in the first period, they answered. Mr. Hockey finalist Carter Batchelder went on a speed rush and just snuck the puck past Wieneke to tie the game at 3-3.

At that point, the scoring dam broke and the game turned into what people were expecting. High-octane offense and fast pace.

That score lasted until the final horn of regulation, and the thrilling matchup was destined for overtime. And in the extra session, Batchelder scored the game-winner to send the Eagles to the state championship and secure a 6-5 win.

Wieneke was remarkable, keeping his team in it when it could have been a larger deficit at times, and totaled 31 saves. “Jack had an outstanding game,” Bergland said.

For the group of outgoing seniors, their legacies will be felt not only in this year’s team but for the seasons to come. “They set the stage for the kids to come,” Bergland said. “The underclassmen have had a chance to learn how to do things the right way and learn by example.”

Before this year, the Maple Grove hockey program hadn’t won a state tournament game. After beating Andover in the quarterfinals and narrowly losing to the Eagles in the semifinals, the foundation has been laid to further advance the program in the years to come, a credit to the 12 departing seniors.

“I can’t be more proud of this group of kids,” Bergland added. “I love them to death...they become part of your family. It’s going to be hard to say goodbye. They made the commitment to stay home and play for each other. I can’t thank them enough for their contribution to the program and the whole community.”