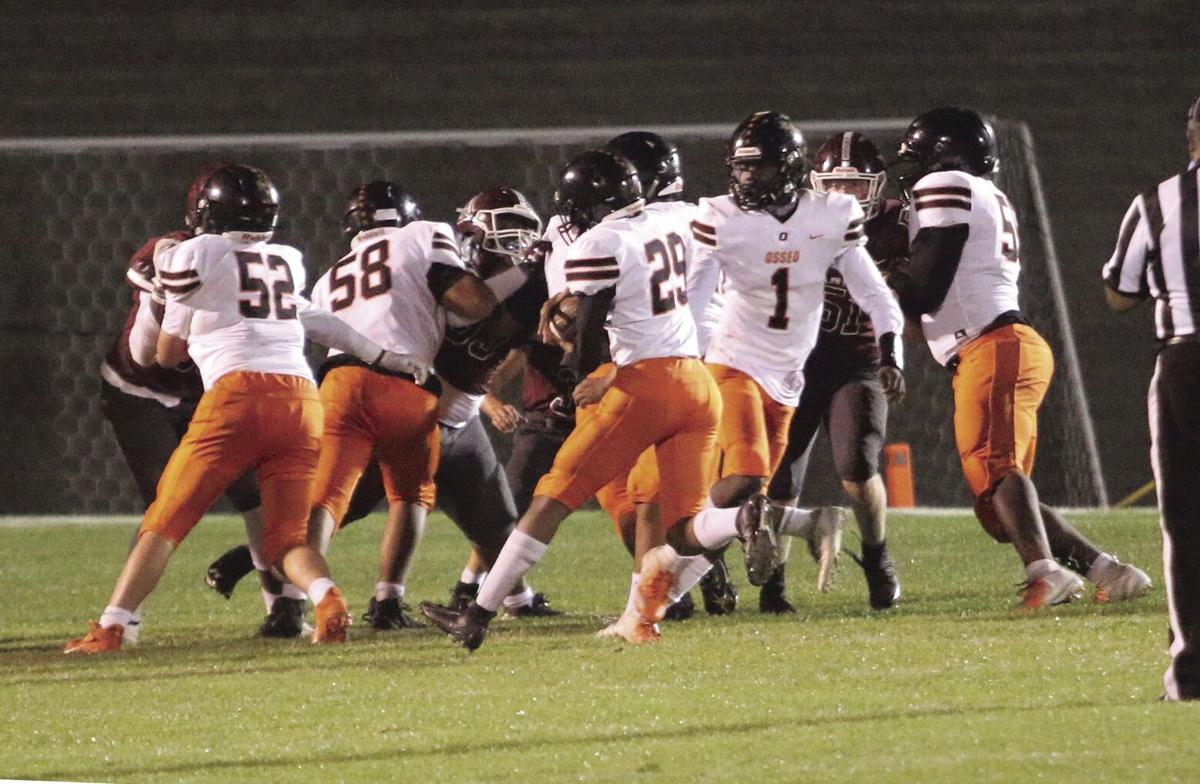 The Osseo football team rushed for 331 yards behind a strong offensive line to open the season with a 37-6 victory at Anoka on Friday. (Photo by Patrick Slack) 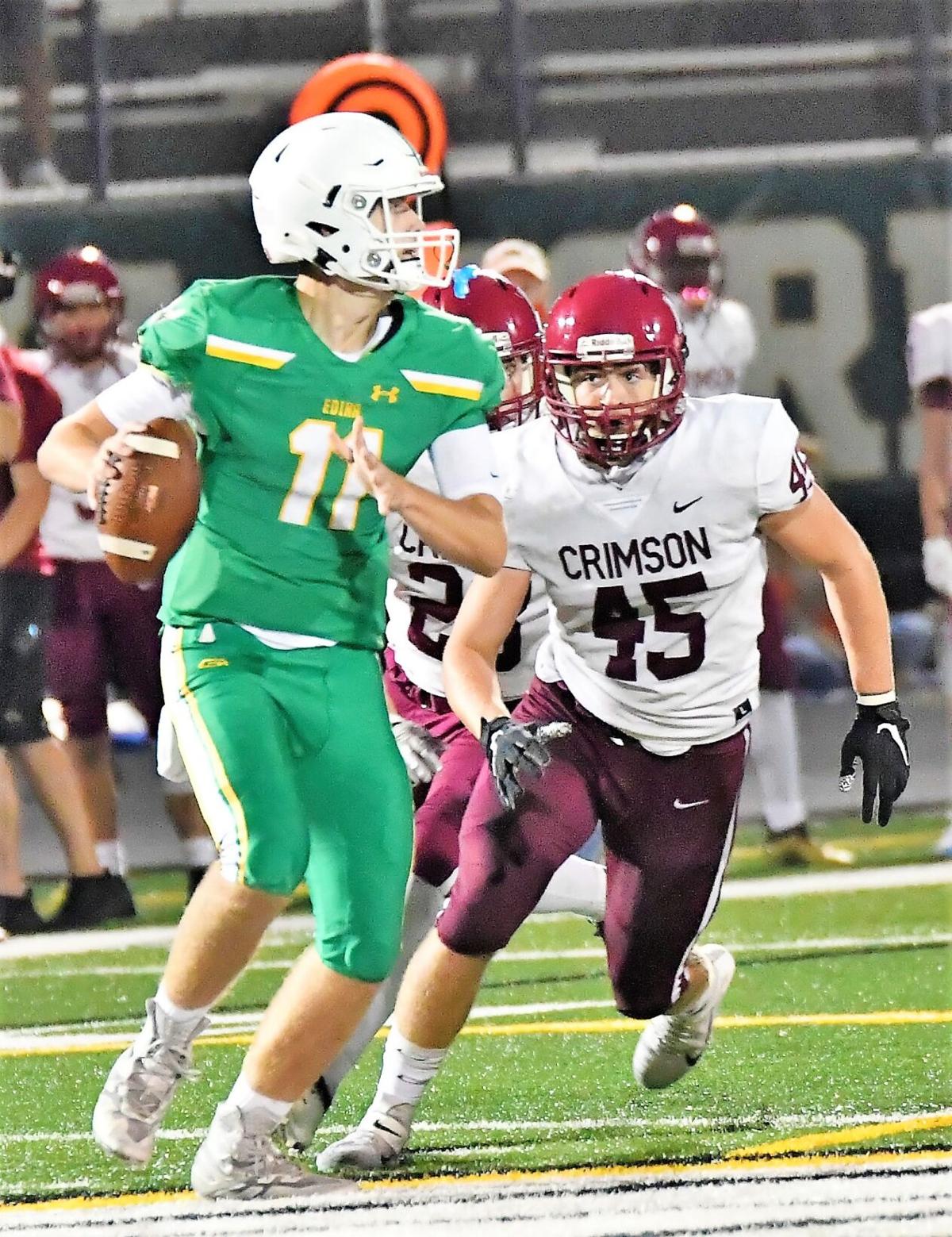 The Osseo football team rushed for 331 yards behind a strong offensive line to open the season with a 37-6 victory at Anoka on Friday. (Photo by Patrick Slack)

After months of uncertainty, Minnesota high school football and volleyball teams returned to their fields and courts last week.

On what would’ve been Week 7 of the football season in a “normal” year, the Maple Grove and Osseo teams each opened what is scheduled to be a six-week regular season with convincing road victories.

The Crimson took down Edina 25-3, while the Orioles used a strong running attack in a 37-6 win over Anoka. The Orioles led 31-0 at halftime.

Osseo got 230 rushing yards and three touchdowns from Kenny McKenzie. The offensive line helped lead the team to 331 total rushing yards. The Orioles started quickly, getting a defensive boost with an interception from linebacker Caiodon Williams, who returned it to the Anoka 2-yard line.

“It was a very clean game from top to bottom,” Osseo coach Ryan Stockhaus said. “Our special teams, defense and offense all complemented each other well. Our senior leaders led and our young players stepped up in a great start to a crazy 2020 season.”

Most Minnesota teams were able to play their season-openers, though a few were postponed or canceled due to positive COVID-19 cases.

Maple Grove is scheduled to have its home-opener at 7 p.m. on Thursday, Oct. 15 against Blaine. Osseo is set to play host to Champlin Park.

Teams are still waiting a decision on when and if there will be a post-season. State tournaments, however, will not be played this fall.

Maple Grove opened the season with a 3-1 win at Champlin Park. The Crimson were scheduled to face Elk River on Monday night and travel to Anoka on Wednesday. Results were not available at press time.

Osseo also started off with a victory, earning a 3-2 win at Totino-Grace. The Orioles’ Monday night match against Robbinsdale Armstrong was postponed, and they were scheduled to play at Coon Rapids on Wednesday.

With no state tournament, the Maple Grove girls’ tennis team has their sights set on a section title after an unbeaten regular season.

The Crimson opened the section tournament with a 7-0 win over Osseo on Thursday, Oct. 8, and blanked St. Michael-Albertville 7-0 in Monday’s semifinals. The Knights loaded their doubles lineup in hopes of earning a sweep, but Maple Grove prevailed in three competitive matches while easily sweeping the singles.

The wins set up a rematch of last year’s section finals. Maple Grove was scheduled to face Wayzata on Wednesday. The Trojans won last year’s match, 4-3, on their way to the state tournament.

Osseo did earn a 6-1 victory over Anoka in the opening round to complete one of its most successful seasons in school history.

“We fell to the 8 seed, as our section is really tough and we had some struggles with injury and sickness the second half of the season,” head coach Eric Ruska said. “However, it was a very positive year. If we look at the last two weeks of the season, we lost to Anoka and Centennial to finish the regular season. Our girls were a bit frustrated and down on themselves.”

“However, in sections we drew a rematch of Anoka, which reinvigorated our girls,” he continued. “We ended up playing one of our best matches for a couple weeks. Maple Grove might be one of the best teams in the state, but we unfortunately will never know. Overall, just having a season and finishing it was amazing. We had great weather and our girls used the opportunity to the best of their ability. I couldn’t be more proud.  This was a tremendous group to work with, the 15 seniors have definitely changed the foundation and expectations of Osseo tennis.”

Maple Grove’s boys’ soccer team finished the regular season with a 9-1-1 record with a 3-2 win at Andover on Tuesday, Oct. 6. The Crimson are the top seed and were scheduled to open the Section 8AA playoffs with a home match against Buffalo on Wednesday. The semifinals are scheduled for Tuesday, Oct. 20, with the championship on Thursday, Oct. 22. All games are at the high seed.

The Maple Grove girls earned the No. 2 seed behind Rogers in Section 8AA. The defending state champion Crimson were scheduled to open the playoffs on Wednesday against Buffalo.

Osseo’s boys won two straight matches to conclude the regular season, capped with a 2-1 win at Elk River on Tuesday, Oct. 6. The Orioles (2-7-2) were scheduled to open Section 5AA on Wednesday with a road match at Brainerd.

The Oriole girls fell 4-0 to Elk River to close the regular season at 1-9-1. They were set to travel to Roseville on Wednesday in the section quarterfinals.