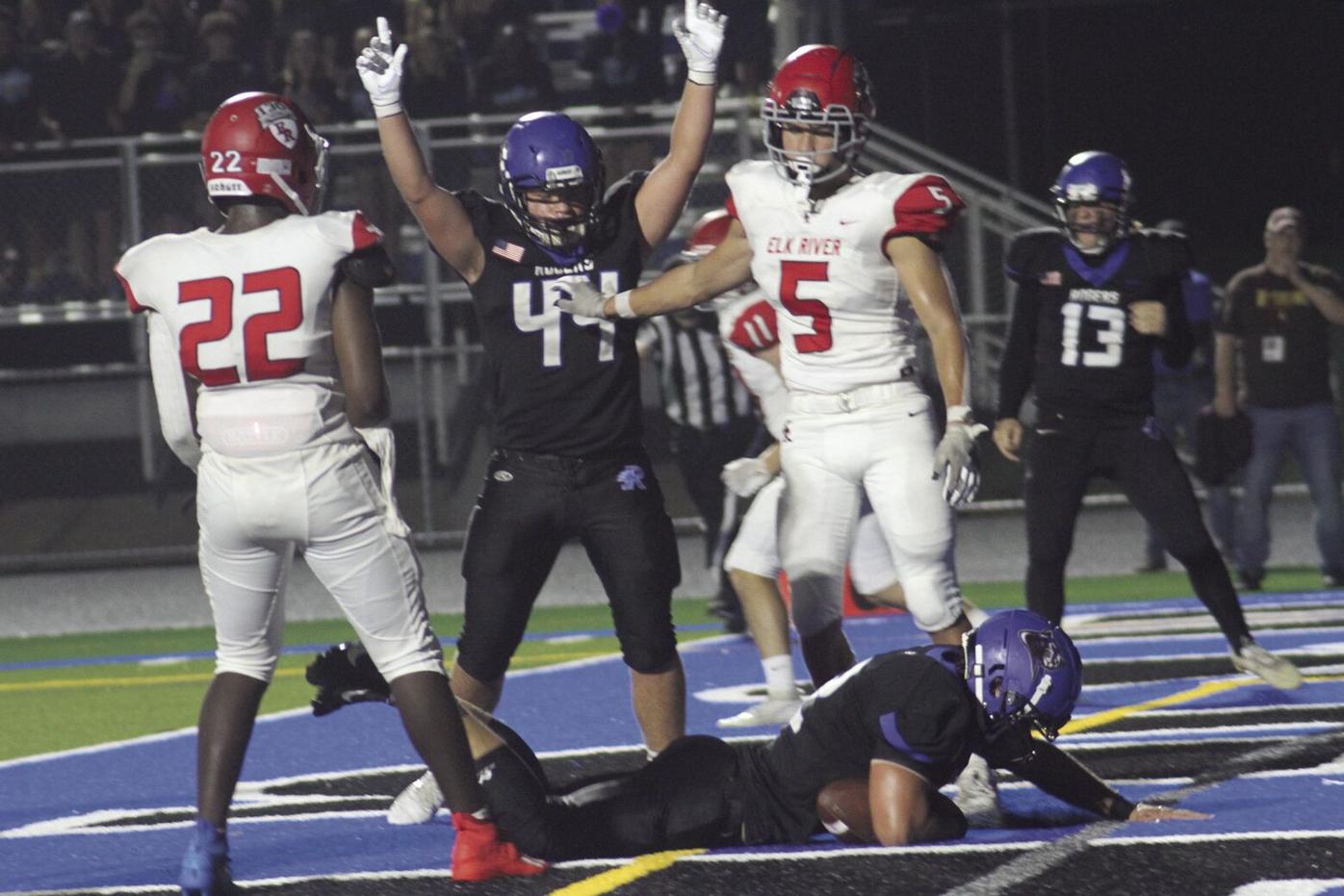 Rogers High School senior Mitch Jezierski scoring the first of two touchdowns as Elk River tried to make a goal line stand. He also scored on a fumble in the third quarter. The Royals defeated the Elks 30-7 on Oct. 1 during its homecoming game. Rogers ran for more than 200 yards in the decisive win. (Photos by Erik Nelson) 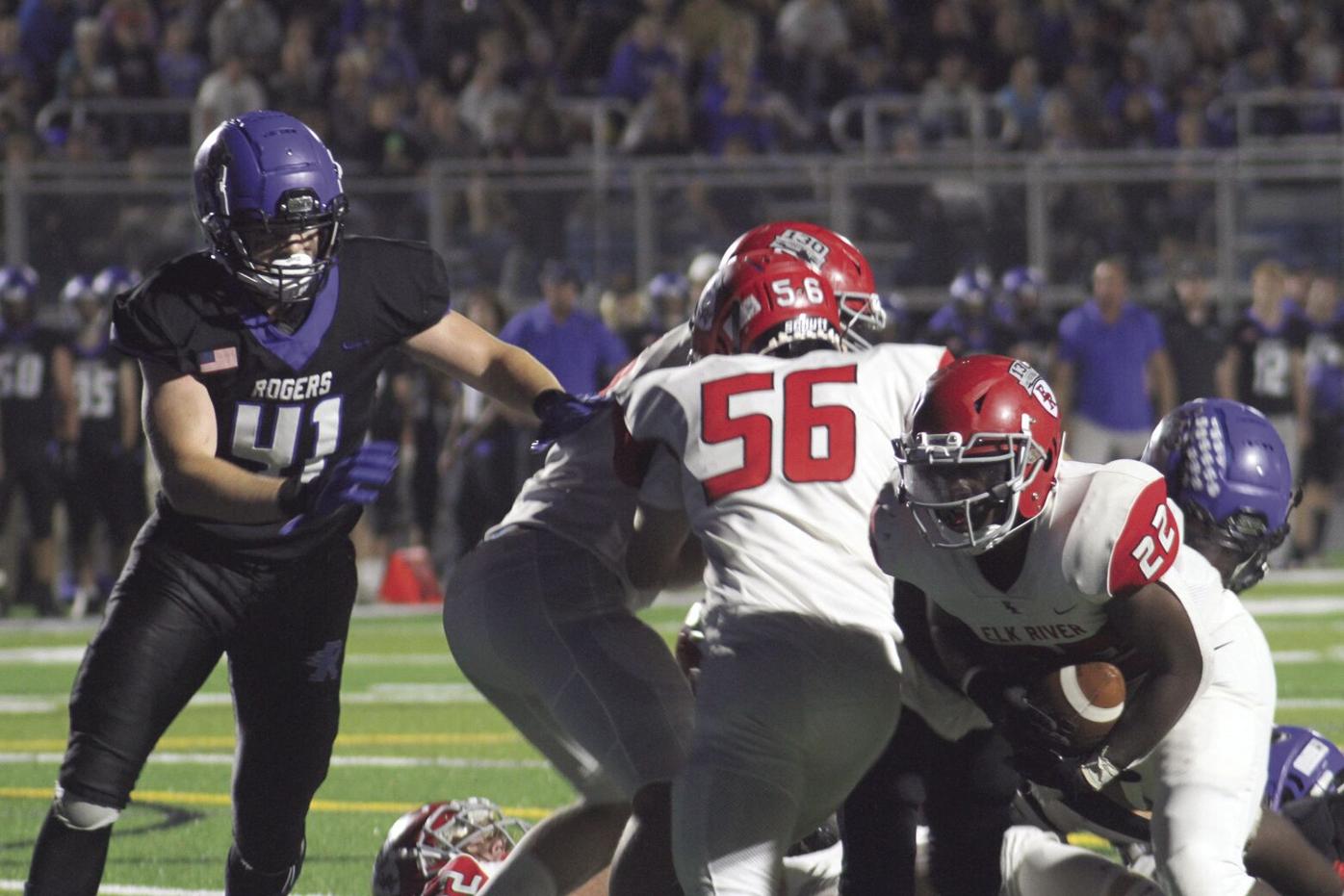 Rogers High School senior Mitch Jezierski scoring the first of two touchdowns as Elk River tried to make a goal line stand. He also scored on a fumble in the third quarter. The Royals defeated the Elks 30-7 on Oct. 1 during its homecoming game. Rogers ran for more than 200 yards in the decisive win. (Photos by Erik Nelson)

After winning its last two games, Team 130 didn’t have an answer for the defending Section 6-4A champion.

Royals senior quarterback Tyson Vylasek thought that Rogers was going to win from the beginning.

“Obviously, scoring first is huge, but it’s a grind,” Vylasek said. “You’ve got to score first, and throughout the game, we dominated.”

Senior tight end Mitch Jezierski scored his first of two touchdowns on the night when he ran 1 yard for his fourth rushing touchdown of the season in the second quarter. A 2-point conversion pass attempt from Vylasek to senior wide receiver Josh Running was unsuccessful.

Later in the second quarter, the Elks responded with their only touchdown of the evening when junior running back P.J. Bono ran 6 yards for his sixth touchdown of 2021. Senior kicker Rylan Keoraj made the extra point.

To conclude the second quarter, Vylasek threw a long pass toward the back of the end zone. Senior wide receiver Kaden Pedersen made a spectacular catch, juggling the ball and finding a way to hang on to control of it to make it 20-7 Rogers. It was Pedersen’s first touchdown reception of 2021.

Pedersen said he tried to keep his eyes on the ball and maintain possession.

“It was instincts, I guess,” Pedersen said. “It was a great play. I thought I was [out of range]. … I wanted that touchdown so bad.”

Honnoll kicked a 21-yard field goal, his first of the season, in the third quarter. Later, Jezierski scored his second touchdown of the game when he ran 48 yards after recovering an Elk River fumble. Honnoll made the extra point to make it 30-7.

After neither team scored in the fourth quarter, the Rogers student section responded with chants of “I believe that we just won!” Both teams shook hands afterward and, following Royals head coach Marc Franz’s postgame speech, the student section stormed the field despite public address announcer Brian Harapat telling all fans in attendance not to enter the field of play after the game. Like in last season’s Section 8-4A championship game, fans flew the white “W” flag, a tribute to the Chicago Cubs, who use that flag to signal a win. The flag also was a key symbol of the Cubs’ 2016 World Series victory, its first since 1908.

Vylasek said Rogers has been successful against Elk River since last season because he believes the Royals are more prepared than the Elks.

“We’re more physical,” he said. “We have a better game plan. It’s a rivalry and we just go hard.”