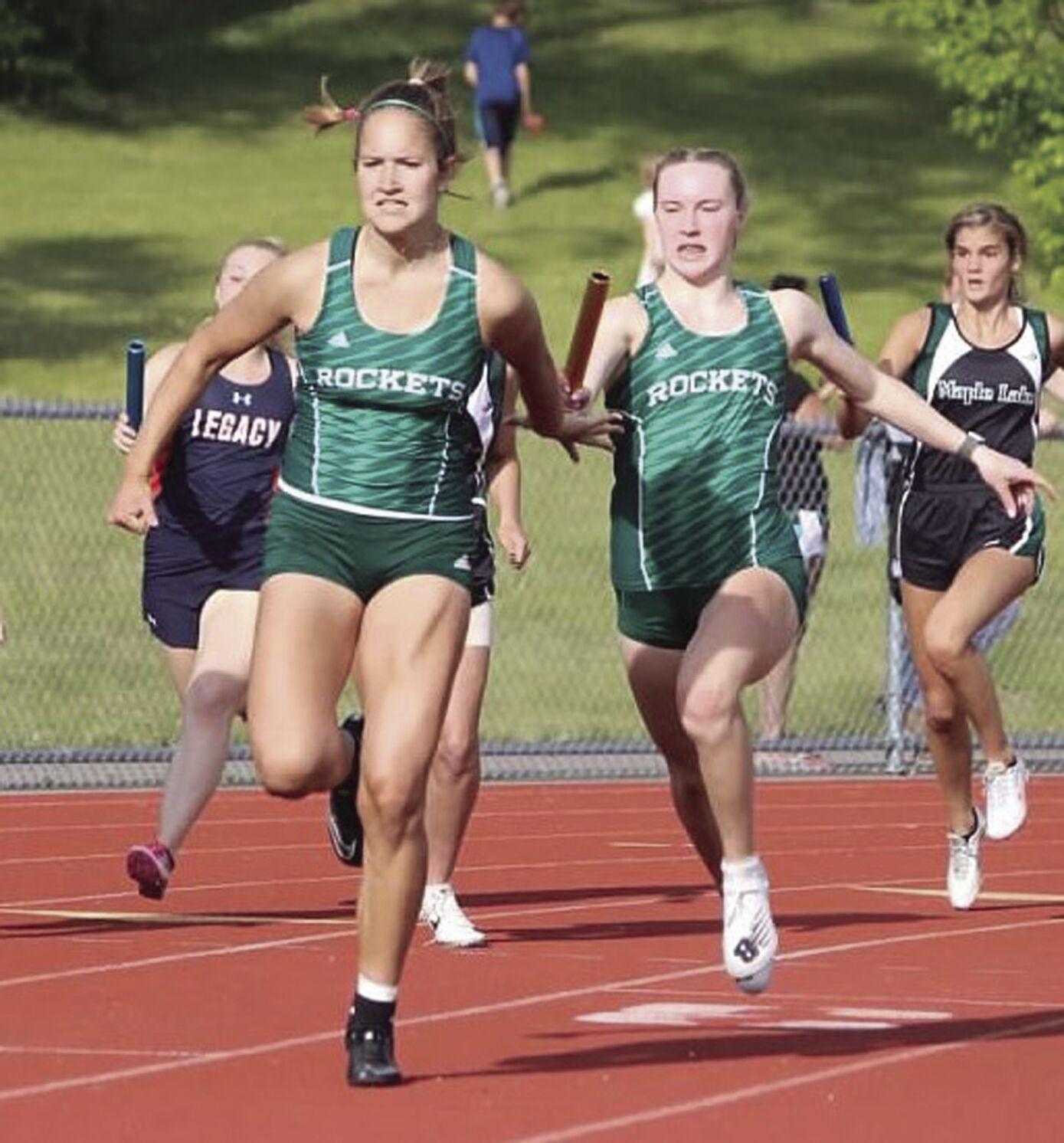 Rockford’s Aliyah Robran takes the hand off from Sara Byers when winning the 4x100 relay at the sub-section track meet at Rockford last week. 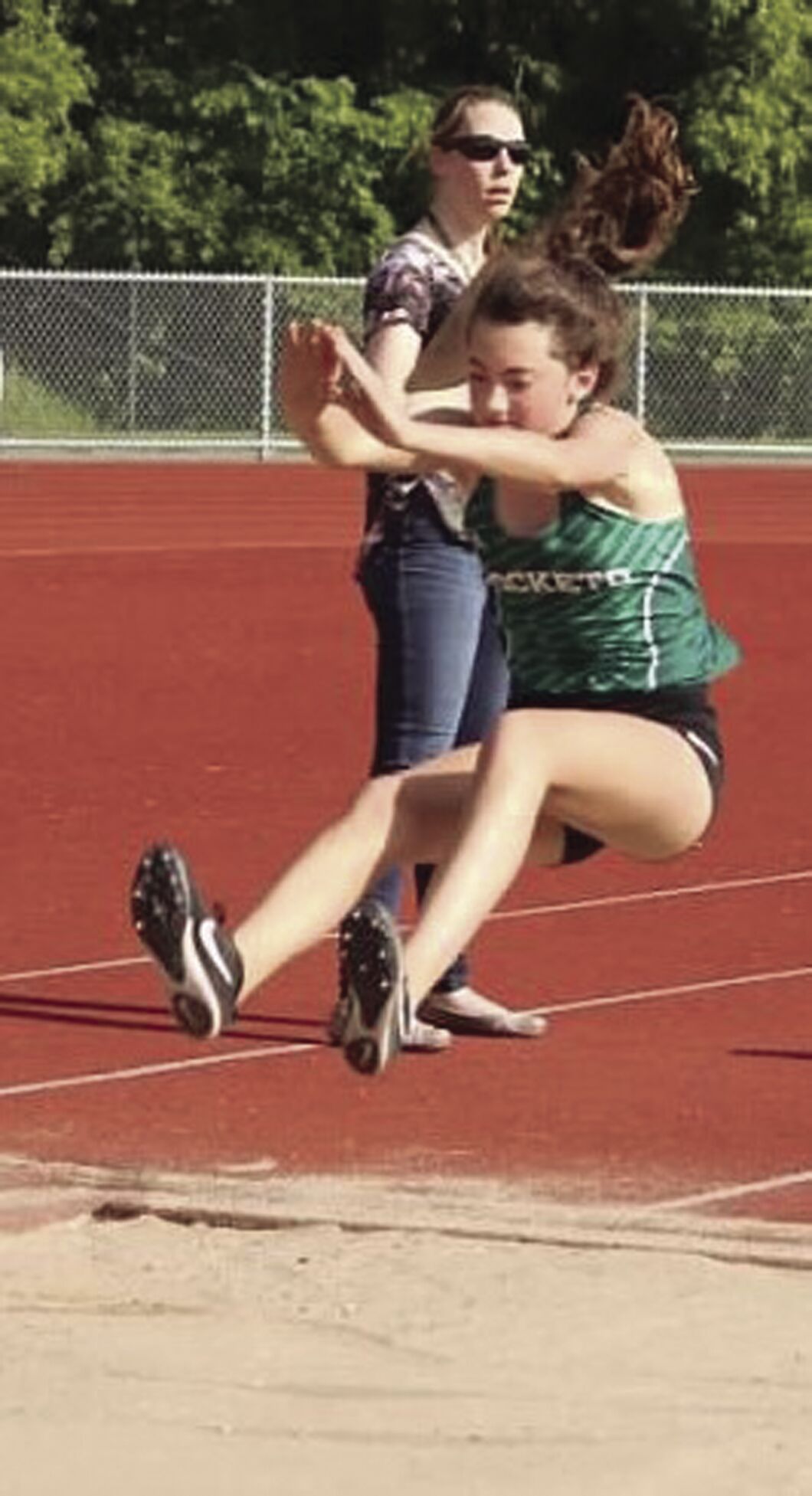 Justine Miller of Rockford advanced to the section finals in the long jump when placing fourth at the sub-section meet.

Rockford’s Aliyah Robran takes the hand off from Sara Byers when winning the 4x100 relay at the sub-section track meet at Rockford last week.

Justine Miller of Rockford advanced to the section finals in the long jump when placing fourth at the sub-section meet.

Both Rockford’s girls and boys track teams won the sub-section meet, getting into good position to send members to the state meet.

The Rockets advanced 32 athletes in 33 events to the Section 5A championships run Wednesday (after this issue went to press) at St. John’s University.

This is the fourth major team championship for Rockford track and field this year. It is the most the school has sent to the section finals.

“We were successful in getting everyone we needed, plus more, to qualify for sections finals,” said coach Chad Robran. “We advanced six of eight relays to the next level. Both girls and boys teams did what they needed to do.”

The goal is to get as many athletes to the state meet, the following weekend at St. Michael-Albertville.

Robran said he placed his top athletes in events that can generate the most team points and try to eliminate competition among itself. The top four individual event places at sub-section advanced to the finals along with the top two relays. The top two individuals and relays advance to state.

For the girls, Rockford captured three of the top four places in the 100-meter run, including Cassia Cady first, Elise Biron third and Hannah Moe fourth.

Sara Byers won the 200 with Moe fifth. Jane West took second in the 400, while Kate Kariniemi was fourth and Meghan Roggenkamp fifth.

In the 800, Kylee Sauers finished third, Maggie Thompson fourth and Natasha James fifth. Elizabeth Smith placed fourth in the 1600. Jane Ashfield was fifth in the 100 hurdles. Aliyah Robran took third in the 300 hurdles with Ashfield fifth.

The girls advanced all four relays to the section finals. The 4x100 was first with Byers, Biorn, Cady and Robran. The 4x200 relay won with Byers, Cady, Robran and Moe.

Miller moved on in the high jump in second place, with Biorn fifth and Moe sixth. Pole vaulters advancing are Isabelle Cox in third and Dayne Lowe fourth. MacKenzie Bakken was close behind in fifth.

Henry Skinner won the high jump with Sean Mottet third. Skinner advanced in the 400 with a second place finish and in the triple jump when finishing fourth. Richards placed second and Mottet fifth.

Sophomore Patrick Andry won the discus with Josiah Zimmer second. Andry was second in the shot put to advance to the finals.