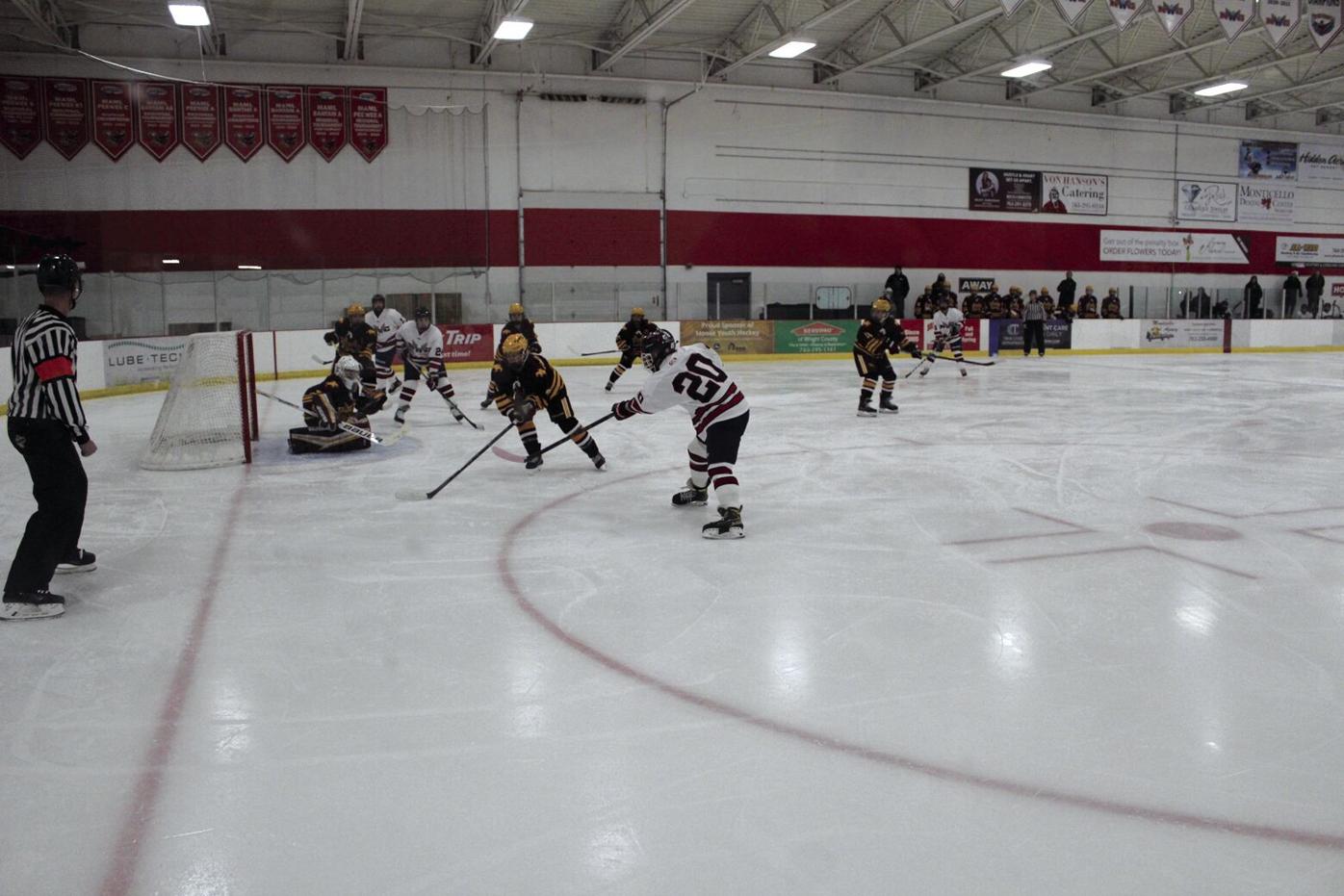 Dani Weiland scores a goal in the first period during a 2-1 win against Forest Lake Nov. 18 at Moose Sherritt Ice Arena in Monticello, Thursday, Nov. 18. (Photo by Jeremy Lagos) 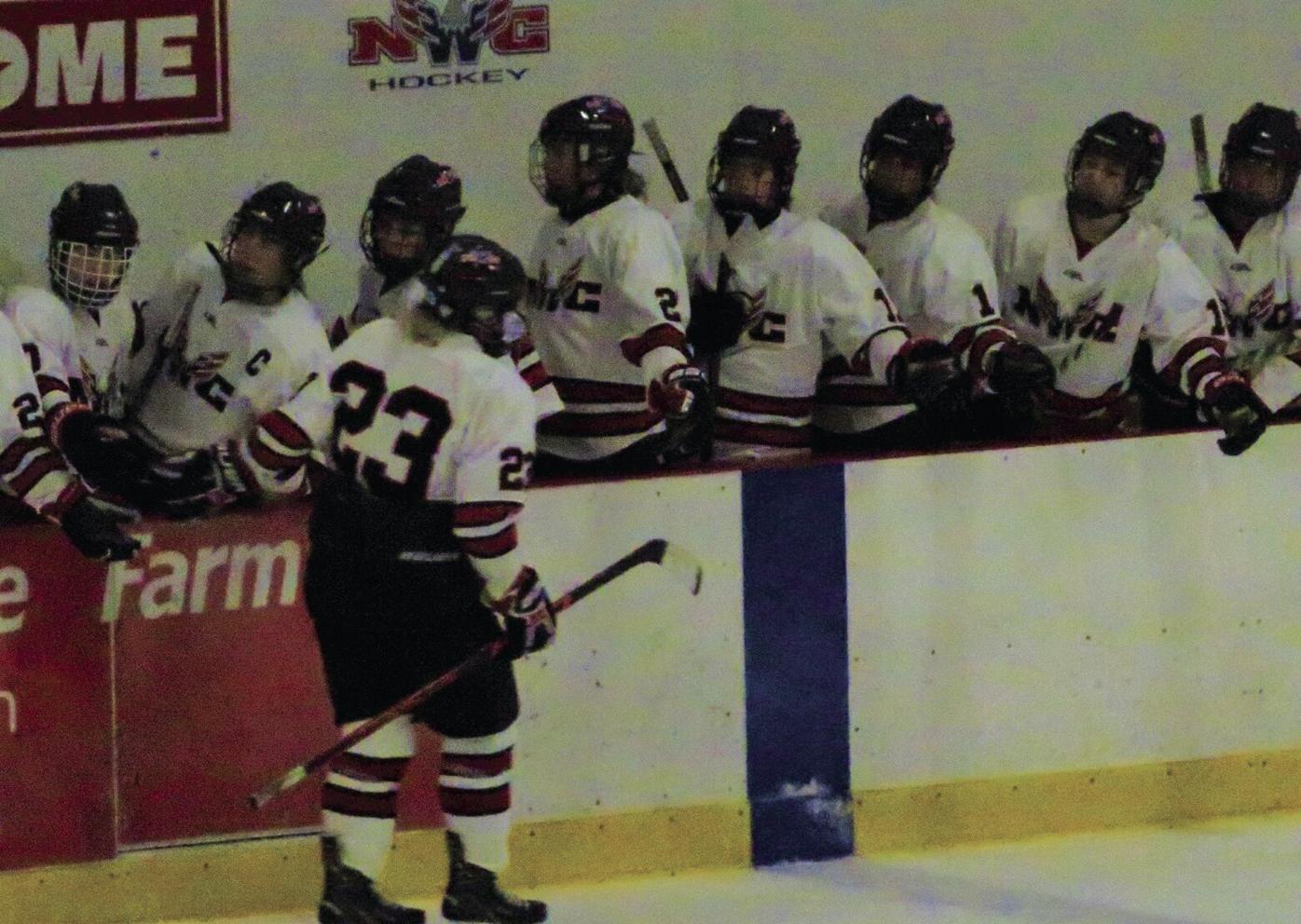 Sydney Petersen (23) gets high-fives from her team after a goal Tuesday, Nov. 16. (Photo by Jake Schroer)

Dani Weiland scores a goal in the first period during a 2-1 win against Forest Lake Nov. 18 at Moose Sherritt Ice Arena in Monticello, Thursday, Nov. 18. (Photo by Jeremy Lagos)

Sydney Petersen (23) gets high-fives from her team after a goal Tuesday, Nov. 16. (Photo by Jake Schroer)

Sydney Petersen’s hat trick lifted the RiverHawks to a 9-0 victory over St. Cloud on Tuesday night in the team’s home opener at the Moose Sherritt Ice Arena in Monticello.

The power play worked well for the RiverHawks as they went two for three in the game. Dani Weiland (Chloe Finnerty, Lilly Gillespie) scored the first goal on the man advantage in the opening period. Then, the team got two goals just seconds apart. Jenna Allen made it 2-0 and then Weiland (Gillespie) scored her second of the night.

After one period, it was 3-0. Three more goals followed in the second period. Adrienne Hansen (Josie VanKuyk), Chloe Finnerty (the second PPG) and Petersen all scored for the RiverHawks.

Petersen (Hansen, Finnerty) scored her second goal in the third period, which was followed by a Lilly Gillespie goal (Weiland, Finnerty). Finally, Petersen (Hansen, Jenna Kyono) secured the hat trick with her third and the ninth goal of the contest.

Head coach Cailyn Olesen said that the team played strong throughout the game.

“They came out, played hard, and they didn’t let off the gas,” she said.

Jadyn Weiser stopped all 17 shots she faced to earn the shutout win.

It was a cold and windy evening and it didn’t get any warmer for Forest Lake inside Moose Sherritt Ice Arena in Monticello Thursday, Nov. 18.

The North Wright County RiverHawks scored the first two goals and held on to beat the Rangers 2-1.

“They worked hard,” said RiverHawks Head Coach Cailyn Olesen. “We got some things to work on before our next game on Saturday, but go in tomorrow morning and get ready to roll. But we’re working hard and that’s the biggest thing. Each game we’re getting better and a 3-0 start to the season is pretty good,” Olesen added.

The party started quick once the puck dropped and it didn’t take long for the RiverHawks to establish some offensive zone time, but didn’t get a lot of shots on net the first couple of minutes.

Forest Lake got whistled for icing a little over three minutes into the period and the RiverHawks were able to take advantage of the extended time spent in the attacking zone. At 3:56 freshman forward Dani Weiland found some space below the right circle face-off dot and her shot beat the goaltender blocker side to open the scoring 1-0. Weiland’s goal was assisted by Lilly Gillespie and Jenna Allen.

North Wright County spent the majority of the opening period on the attack early, but Forest Lake startled to settle in a little bit and got a couple power plays late in the first frame. The RiverHawks spent basically four straight minutes on the penalty kill, but junior goalie Jadyn Weiser made some huge saves to keep North Wright County up 1-0 after the first 17 minutes.

The ice started to tilt in favor of Forest Lake for the first part of the second period. Forest Lake got some good shot attempts, but they were either blocked before they could get to Weiser if she wasn’t already in position to make some high quality saves. Perhaps none better than a shot on goal just over four minutes into the period when a Ranger was all alone with Weiser just above the crease, but Weiser made the save to keep the RiverHawks up 1-0 still.

A couple minutes later the RiverHawks had a plethora of chances to double their lead, but a lot of their shots on goal were right into the stomach of Rangers’ goaltender Donelle Decker.

After several minutes of keeping the pressure on the Rangers, the RiverHawks finally broke through again. 9:38 of the second period, senior blueliner Brooke Brown sent in a shot from the boards right next to her team’s bench that snuck in just past Decker’s pad down low for the game winning goal and a 2-0 lead.

Weiser made a lot more saves to keep the two goal lead for nearly the rest of the period, but with under a minute left in the period a shot from Forest Lake’s Sami Pool beat Weiser back post to cut the deficit to 2-1 with the third period left to decide the game.

The Rangers got some early pressure to start the third period, but couldn’t bang the puck home despite lots of chaos in front of the net and after the RiverHawks survived the early duress were able to hold on to win 2-1.

Forest Lake pulled its goalie late, but were unable to score with the extra attacker and that sealed the deal for North Wright County, which won 2-1 to start their season 3-0. Weiser finished with 35 saves and helped the RiverHawks penalty kill go 3/3, which was key with the power play going 0/1.

“Jadyn (Weiser) played really solid for us tonight,” said Olesen. “She saved us on a lot of opportunities that they had and a lot of odd man rushes,” added Olesen.

It was a pretty solid all-around game from the RiverHawks who would look to keep their undefeated start to the season alive.

The RiverHawks put their 3-0 start on the line on the road against Moorhead Saturday, Nov. 20, but were unable to keep the streak going. After outscoring their opponents 17-1 through the first three games, the RiverHawks gave up three goals and dropped to 3-1 on the season. North Wright County got goals from Josie VanKuyk and Brooke Brown with an assist going to Sydney Petersen on VanKuyk’s goal.

Next up for North Wright County is a road game against Breck on Tuesday with the last home game in Monticello at Moose Sherritt Ice Arena on Tuesday, Nov. 30. The remaining home games will be played at St. Michael-Albertville Ice Arena.