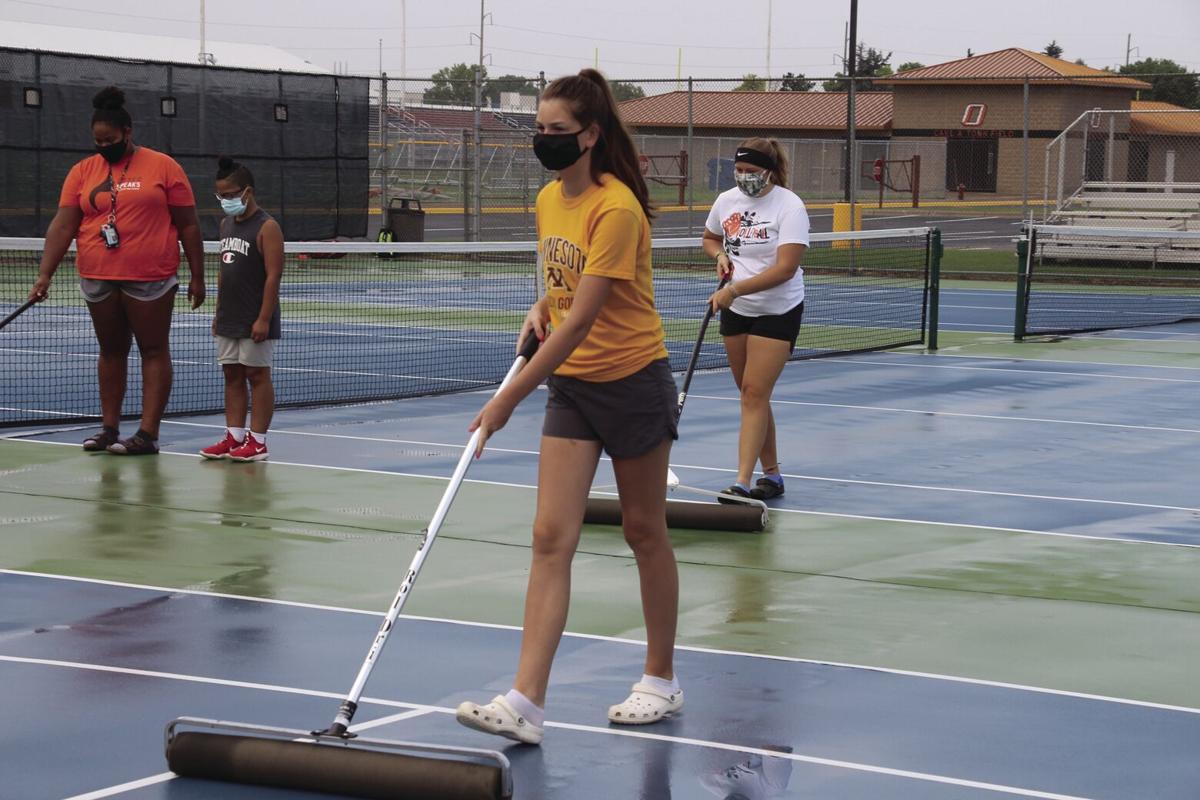 Members of the Osseo High School girls’ tennis team had a little extra work to do before practice on Monday, Aug. 24. The Orioles did their work to squeegee the courts after a morning storm to get the courts ready before their season-opening match Tuesday, Aug. 25, at Rogers. (Photos by Tom Fenton) 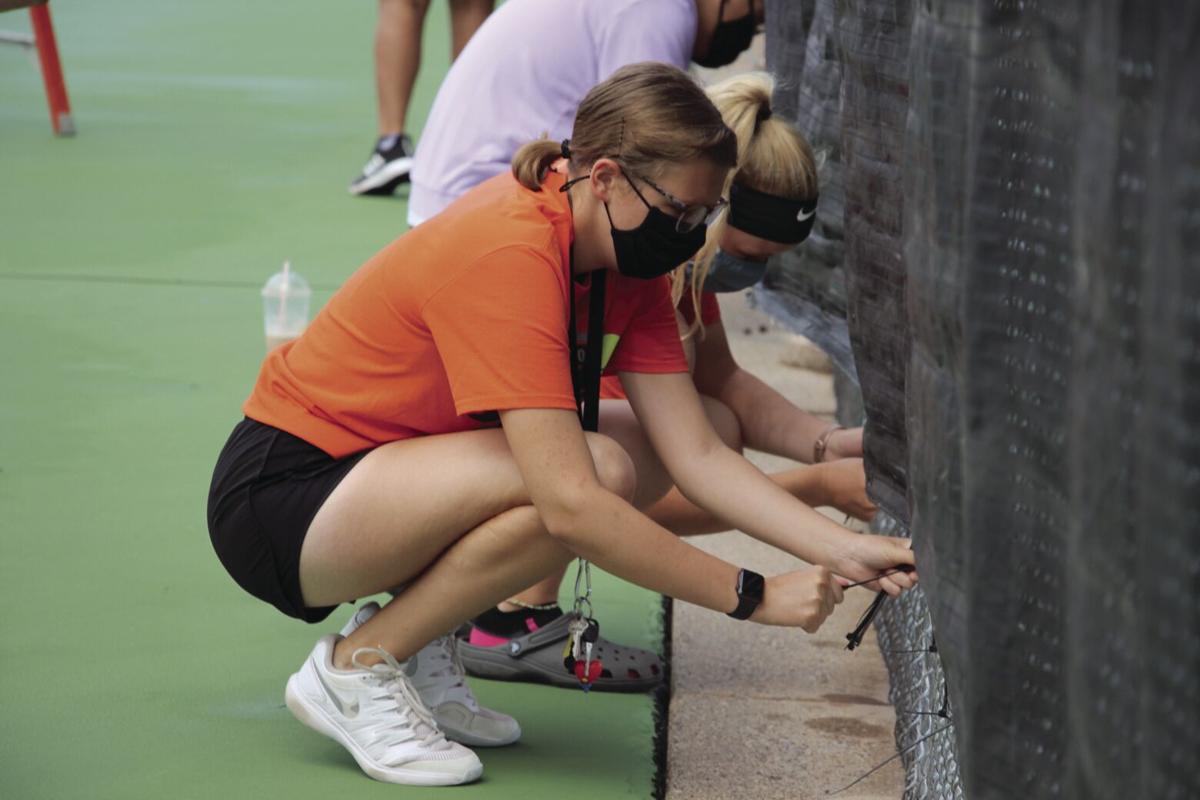 After a weather delay on Aug. 24, members of the Osseo High School girls’ tennis team worked on installing the wind screens at their home court. The Orioles were scheduled to open the season on Tuesday, Aug. 25 against Rogers. 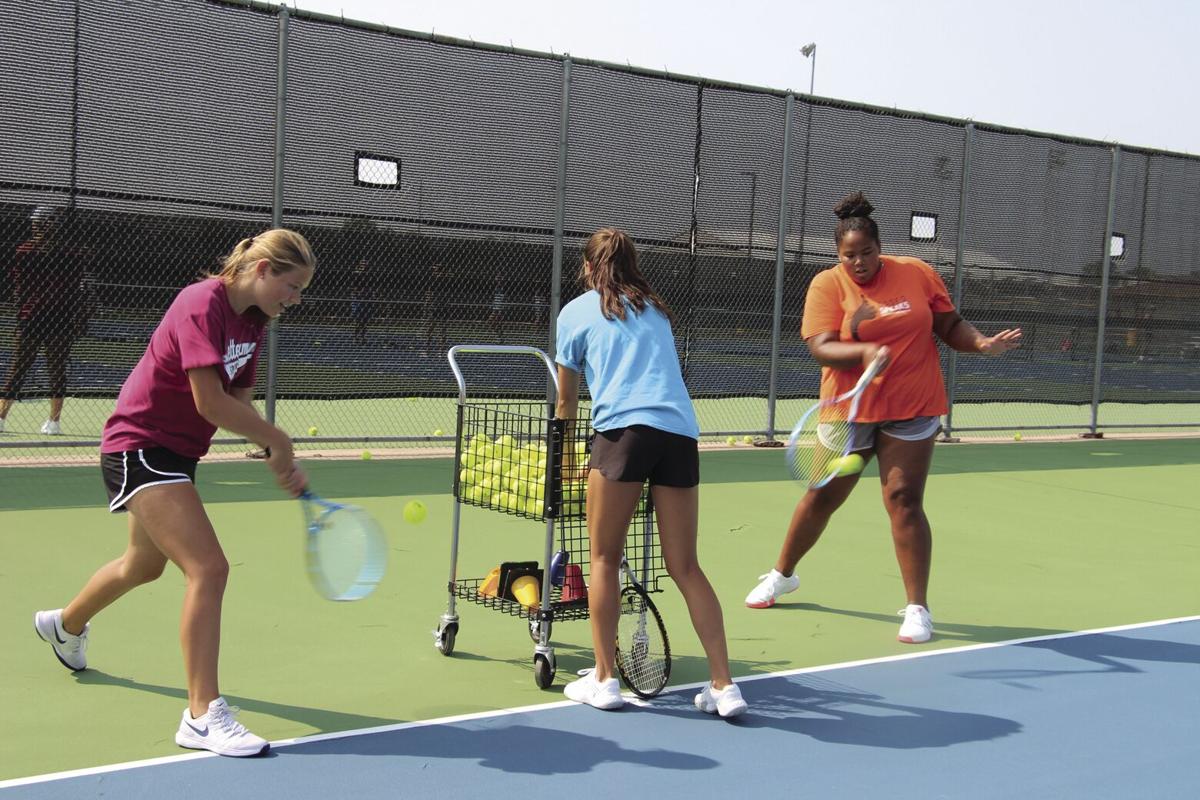 The Osseo girls’ tennis team went through workouts during practice on Aug. 24. At left is No. 1 singles player Rachel Zeltinger, while Jaelon Irmiter, who plays No. 1 doubles, hits forehands.

Members of the Osseo High School girls’ tennis team had a little extra work to do before practice on Monday, Aug. 24. The Orioles did their work to squeegee the courts after a morning storm to get the courts ready before their season-opening match Tuesday, Aug. 25, at Rogers. (Photos by Tom Fenton)

After a weather delay on Aug. 24, members of the Osseo High School girls’ tennis team worked on installing the wind screens at their home court. The Orioles were scheduled to open the season on Tuesday, Aug. 25 against Rogers.

The Osseo girls’ tennis team went through workouts during practice on Aug. 24. At left is No. 1 singles player Rachel Zeltinger, while Jaelon Irmiter, who plays No. 1 doubles, hits forehands.

Osseo High School softball coach Eric Ruska had to do the unthinkable last spring. Though every spring sports coach in Minnesota had to do it, telling his team their season was over in an instant due to COVID-19 is not something he wants to repeat.

“Our softball season got cut off, and to tell a bunch of seniors that they’re never going to play again was really hard,” Ruska said. “To have to do that with this team -- some of them I’ve been around them for six years – to tell them that ‘I’m sorry, you worked really hard and done everything we’ve asked, but there won’t be a season’ would be really hard.’ I didn’t want to do that again.”

Aug. 24 marked the first day of Week 2 of the Minnesota high school fall sports season. The Minnesota State High School League gave the go-ahead for girls’ tennis, boys’ and girls’ soccer, girls’ swimming and diving, along with boys’ and girls’ cross country to have a limited season at its recent board meeting. While football and volleyball teams were told they had to wait until March, other fall sports teams immediately had to deal with the emotional balance of having a season under incredibly different circumstances.

The decision meant school officials and coaches had to quickly adjust. Season schedules are limited to 11 competitions, which is far less than normal. Sports like cross country and tennis, which often have multi-team invitational events, were told they can only have dual meets or three-team events at the most. Teams cannot compete in more than two games/matches in one week, and travel also has been limited to teams playing within their respective conference and section.

The decision of post-season play, including state tournaments, has yet to be determined.

In this crazy 2020, having a chance to have any semblance of a season seems enough for the Orioles.

“It was really exciting to learn we were going to have a season even though it’s going to be cut short,” said Rachel Zeltinger, who is slated to play No. 1 singles. “I was still glad the team got to come together and have a last season together as seniors. It’s been really different. We’ve been social distancing and keeping six feet apart. We haven’t been able to interact as much as we’d like. We’ve had to keep our distance, but we’ve still been able to bond as a team.”

Monday morning’s practice was the epitome of high school sports. After a morning storm, the courts at Osseo High School were soaked and were slow to dry due to quickly rising temperatures and humidity. The team of about 40 girls took turns with squeegees to make the courts safe while others attached windscreens to the fences – all while wearing masks.

“It’s been really hard. We’ve been talked to and sometimes forget that COVID-19 is still a thing and we have to be reminded sometimes that this is still happening,” Zeltinger said. “We do understand that, but it’s been hard. I’m just happy that we have a season. It was close that it was going to get canceled, so I’m glad we have the matches we have.”

Once practice began, the Orioles were immersed in half-court and serving drills before getting down to the basics of groundstrokes and volleys in preparation for their season-opening match on Tuesday at Rogers. Music from Lynyrd Skynyrd, Elton John, Michael Jackson, Billy Squier and Bob Seger played on the speaker adjacent to the courts, though none of the players seemed to know the lyrics.

Ruska said while tennis drills themselves haven’t changed much, the off-court activities are different. Each player does a self-health check on the team’s Snapchat account before practice and, when given the green light, shows up at practice to get a temperature check. Once cleared, it’s business as usual other than the fact the team can’t congregate.

“In terms of preparation, it hasn’t been much different for the tennis stuff. It’s the planning for the restrictions that are different,” Ruska said. “We’re spending more time on the court with less time playing tennis, which is strange because of the pods we are using. The practice times are spread out during the day. The planning of the daily health checks is all different, but it’s actually worked really smooth. It takes about five minutes to check in the kids and then we get going.”

Osseo was 11-7 in duals last season, but lost its top two singles players and top two doubles teams. That said, Ruska said there are a number of players to help fill those voids.

“Our numbers are down a little, and I think that’s because of COVID-19, but I do think we’ve got a handful of kids who can step in,” Ruska said. “I think the girls have done an awesome job adjusting to all the changes. They wear their masks coming out of their cars, they wear them to their bags and they actually socially distance really well. We thought we’d have a hard time with that. But we stressed right away that if we want to play for the whole season, we’re going to have to do these things better. It’s on them. We can’t be the only ones harping on them. When it comes down to it, they’ve internalized it and have done really well.”