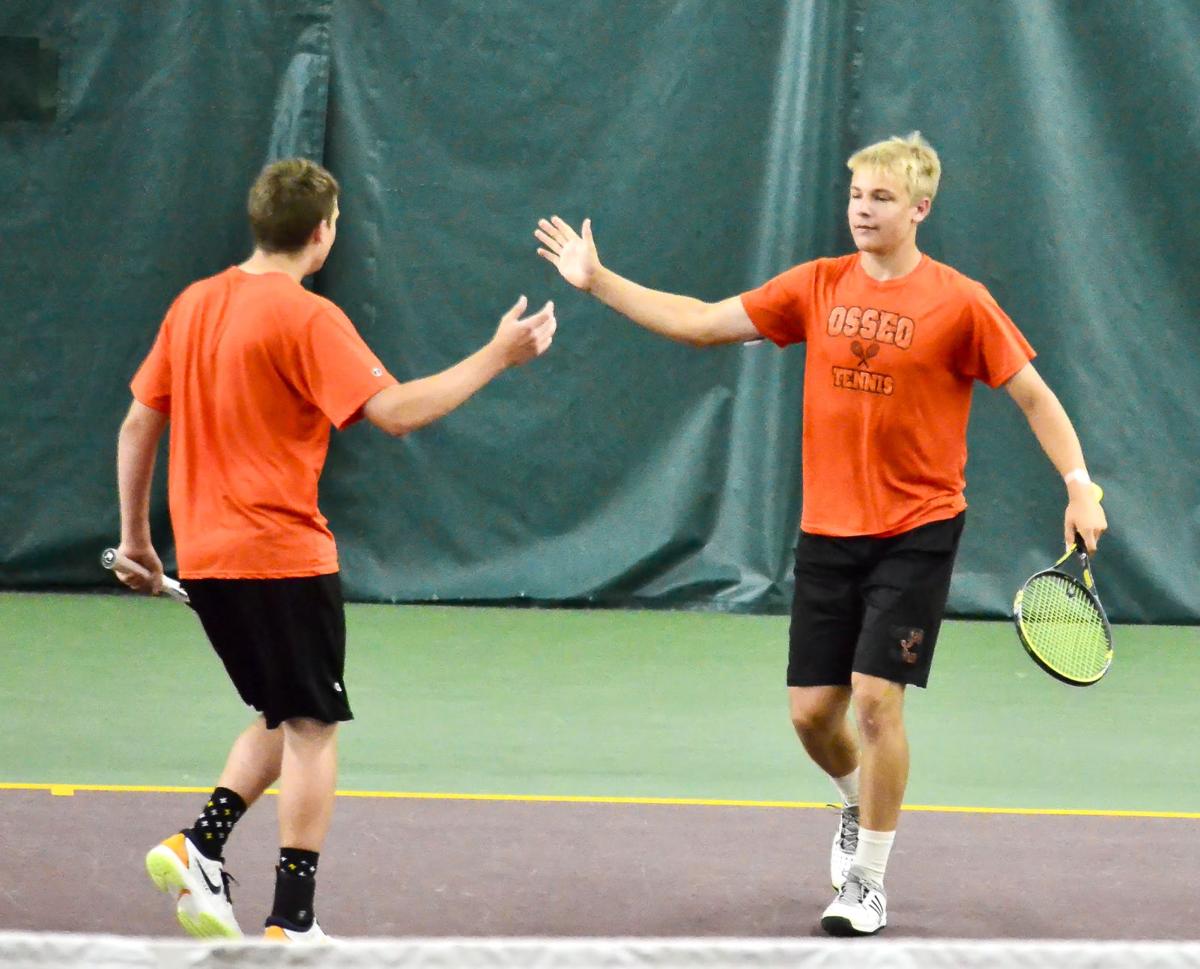 Osseo senior Nick Kjome (right) celebrates a point with teammate Nick Trzynka in a 5AA section doubles match in 2019. Kjome and Trzynka were expected to remain the top Orioles' doubles team in 2020. Kjome graduated, and Trzynka will be one of the senior leaders expected back in 2021. 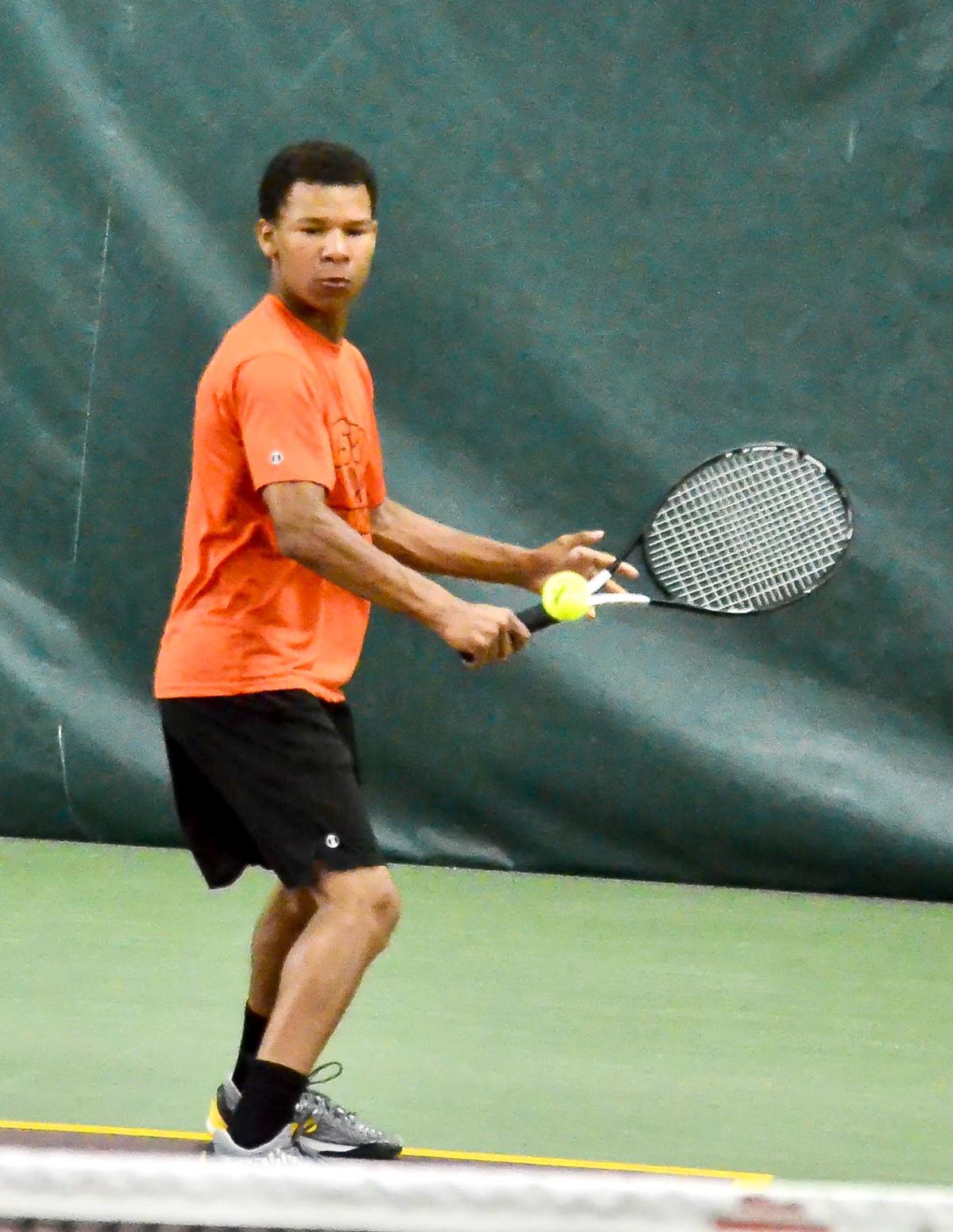 Osseo junior Josiah Tusler knocks a backhand back over the net in the 5AA section doubles bracket in 2019. Tusler is expected to be one of the senior leaders in 2021. 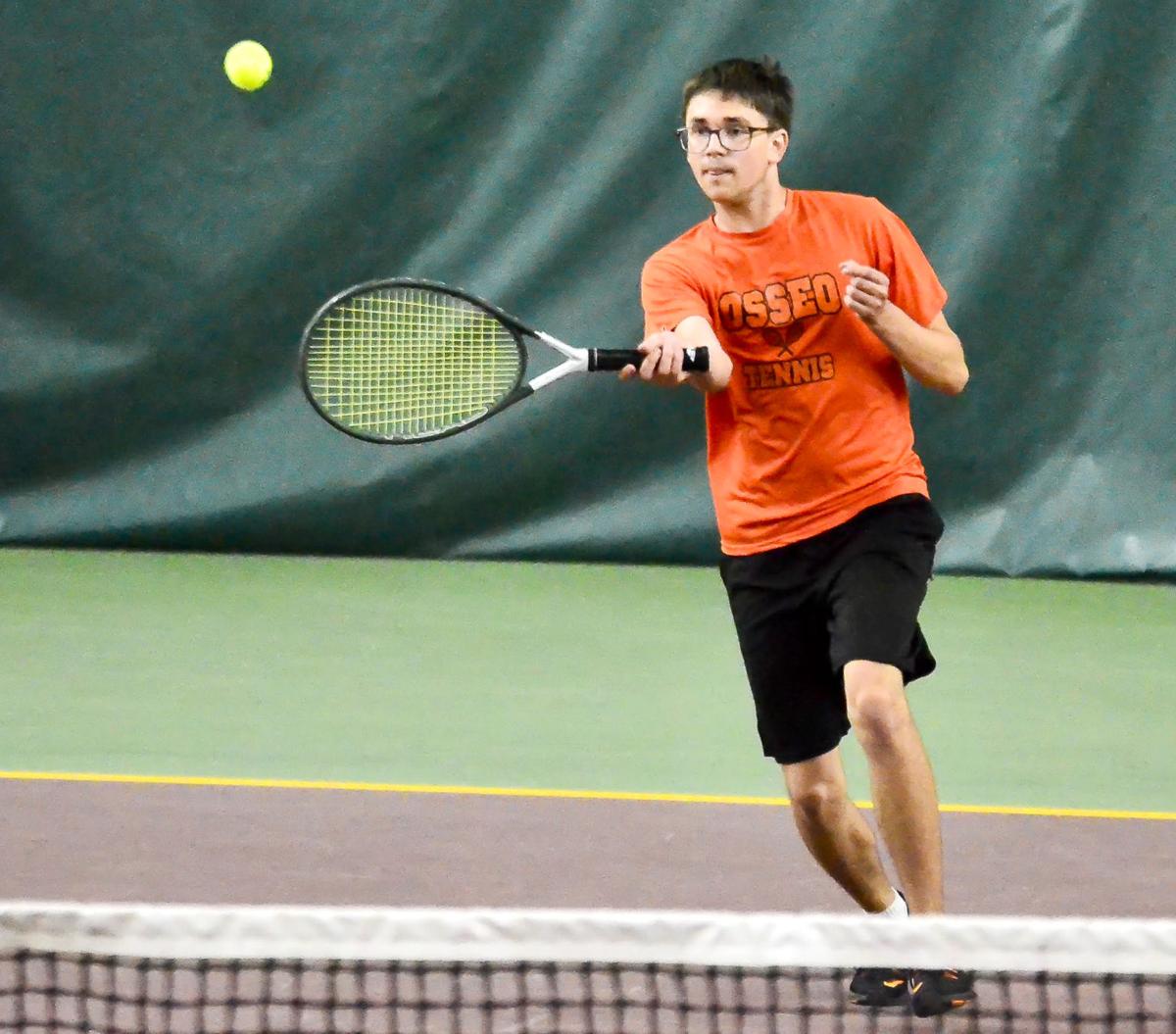 Osseo junior Wyatt Arbogast hits a shot over the net in the 5AA sections doubles bracket in 2019. Arbogast is one of several returners expected back in 2021.

Osseo senior Nick Kjome (right) celebrates a point with teammate Nick Trzynka in a 5AA section doubles match in 2019. Kjome and Trzynka were expected to remain the top Orioles' doubles team in 2020. Kjome graduated, and Trzynka will be one of the senior leaders expected back in 2021.

Osseo junior Josiah Tusler knocks a backhand back over the net in the 5AA section doubles bracket in 2019. Tusler is expected to be one of the senior leaders in 2021.

Osseo junior Wyatt Arbogast hits a shot over the net in the 5AA sections doubles bracket in 2019. Arbogast is one of several returners expected back in 2021.

Osseo boys tennis is one of several area high school teams that had to deal with the COVID-19 pandemic shutdown and eventual cancellation of the spring season.

The Orioles came into 2020 with high hopes after an offseason of weight training, hitting and coaching with USGA coaches. Co-head coach Brian Rusche has USGA ties, so he was able to work out court time.

And while there were several graduations after 2019, the returners – seniors Nicholas Kjome and Jordan Dysalek, juniors Nicholas Trzynka, Josiah Tusler, Wyatt Arbogast and Chris Burrow, sophomores Owen Kubisiak, Justin Do and Jake Miron, freshman Timmy McHugo and eighth-grader Michael James – were expected to show improvement and mesh well with some newcomers.

“We have kids that are willing to do what’s best for the team in order to get the team win,” co-head coach Dan Prody said. “We have a lot of kids who are willing to be put into singles or doubles or put in a hard match or if they prefer singles, they will still play some doubles just to help out our team.

“It’s a bummer because we had just this group of awesome kids and we had some newcomers coming in.”

Kjome and Trzynka were the top doubles team from 2019, and they were putting in a lot of time in the weight room to improve. Arbogast, Tusler and James also put in a lot of offseason work, and they were expected to help at both singles and doubles.

Kjome had been with the program since eighth grade, and Prody said he is a “workhorse.” Kjome is a three-sport athlete – also competing in Nordic skiing and cross country – and he was a part of the orchestra, as well.

Prody said Kjome leads by example and works hard no matter what. He is also a great teammate and also did a nice job balancing school work with everything else.

“I really can’t say enough good things about him,” Prody said. “I am really impressed at that young age to be able to balance that big a workload along with all of the other things that go along with being a teenager.”

Dysalek was a little different in that he didn’t come out to play tennis until last year. Prody said he knew him since his sophomore year when Dysalek was in Prody’s ceramics class at Osseo.

Prody talked Dysalek to come out to the team last season, and it was a big hit with the rest of the team.

“He’s fun to be around,” Prody said. “He’ll do what coaches ask him to do. He’ll play doubles. He’ll play singles. He asks what he can do to be better. He played a boatload of tennis this winter and was looking to be a big part of our lineup.”

Heading into the season before everything was suspended, the captains practices were going on with volleys and basic footwork being worked on.

The courts were all set up and ready to go, but that is when the unknowns began. For a month, there was a wait-and-see period and coaches handed out workouts. Rusche also developed drills for serving, volleys and basic ground strokes that could be done at home.

There were virtual team meetings on Fridays and chalk talks, but Prody said it was hard on the coaching staff and the team to be able to get on the courts.

The season was canceled on April 23 with all of the other spring sports and activities in the state, and tennis courts were closed until late May. The summer contact period was also pushed back to June 15.

But the Osseo Orioles Tennis Summer Academy is happening with the help of Centers for Disease Control guidelines to help with social distancing.

That can help get some students out of the house and also get a head start to helping develop players for 2021 and beyond.

Some players were able to get out on the tennis courts, and Orioles were using the TeamSnap app to keep in touch. Prody said he was driving by the courts and seeing Osseo players hitting and helping each other out.

“We are just trying to keep a positive energy in a time where I think it would be easy for anybody to just say, ‘Hey, you know what? We will hang it up. We’ll wait until next year,’” Prody said. “We’re trying to get something going, and it has been fun.”

And besides the varsity players from 2020 that will be expected back next year, newcomers Trevor McNamara and sophomore Rudy Runyon are two players that were going to help out Osseo if there was a season this year.

Runyon is a hockey player that Prody said can run anything down, and McNamara attended Gustavus Adolphus College summer camps in 2019. Both were expected to make an impact.

Prody said he is excited for the group as a whole.

“We’re really excited about the strides we did make in the weight room during this offseason, just getting kids bigger, faster, stronger,” Prody said. “That kind of transitions over to our newcomers coming in where we just got some real raw athletes.”