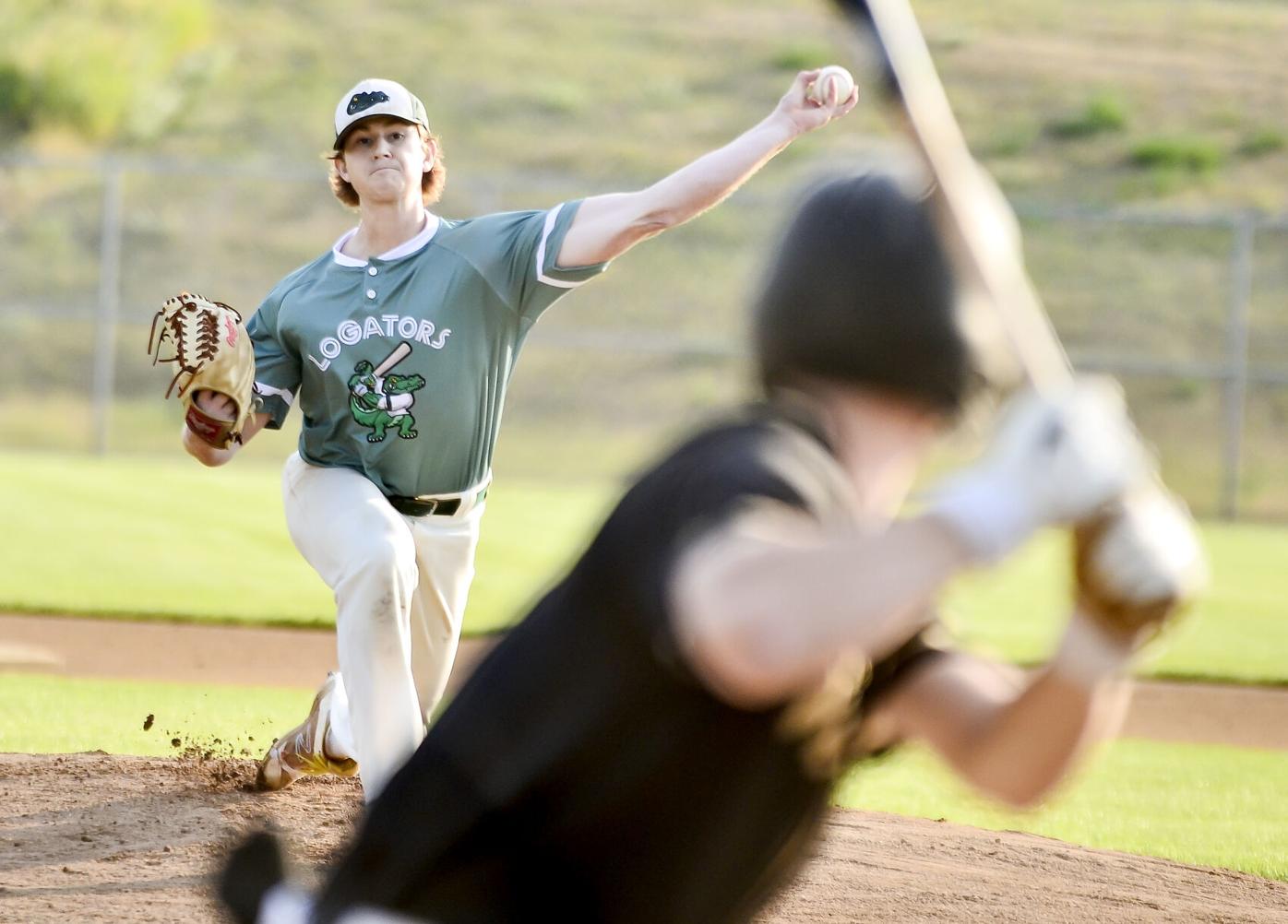 Champlin's Charlie Hutchinson throws a pitch in the first inning July 9 in a non-league game against East Grand Forks at Noble Sports Park. Hutchinson struck out 12 in a 10-0 win. 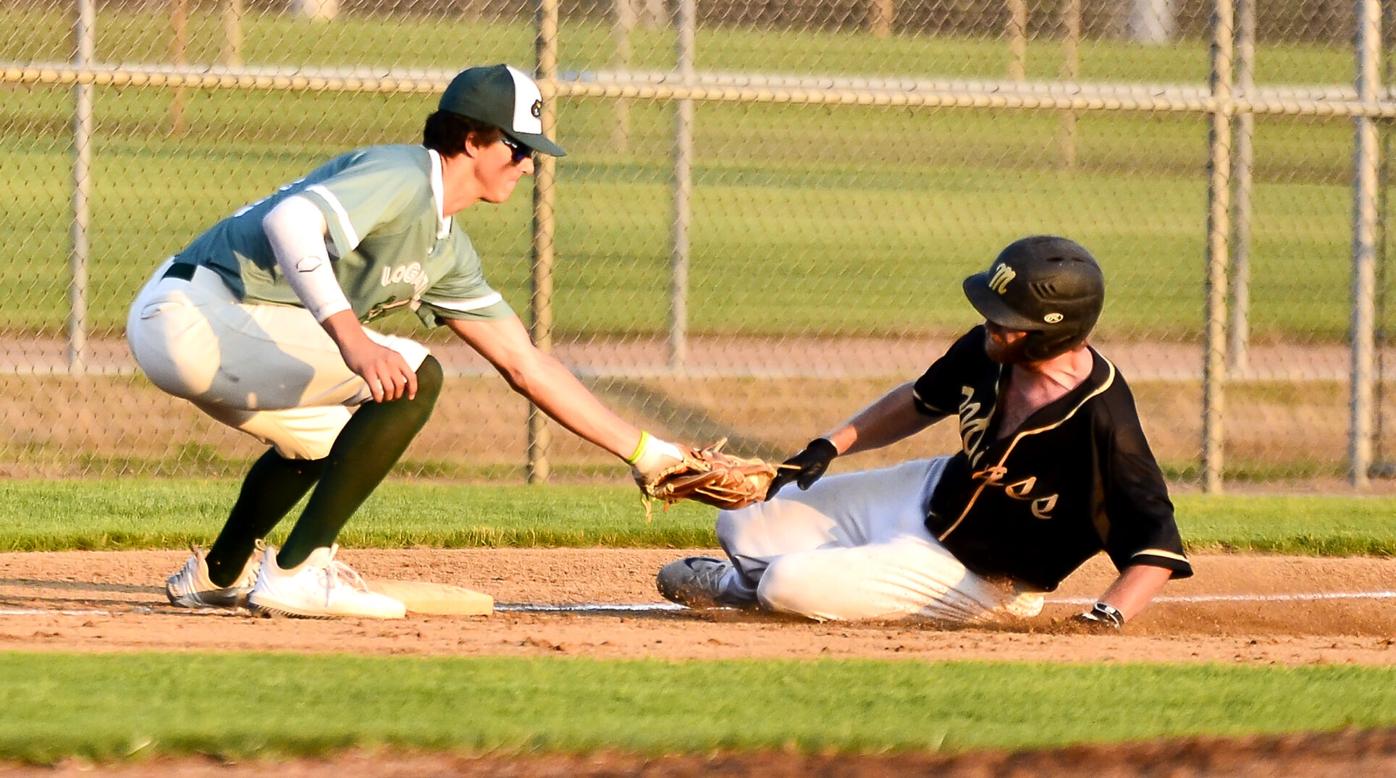 Champlin's Jack Puder tags out Kade Spencer, who was trying to stretch a double into a triple in the fifth inning, July 9 in a non-league game against East Grand Forks at Noble Sports Park. Hutchinson struck out 12 in a 10-0 win. 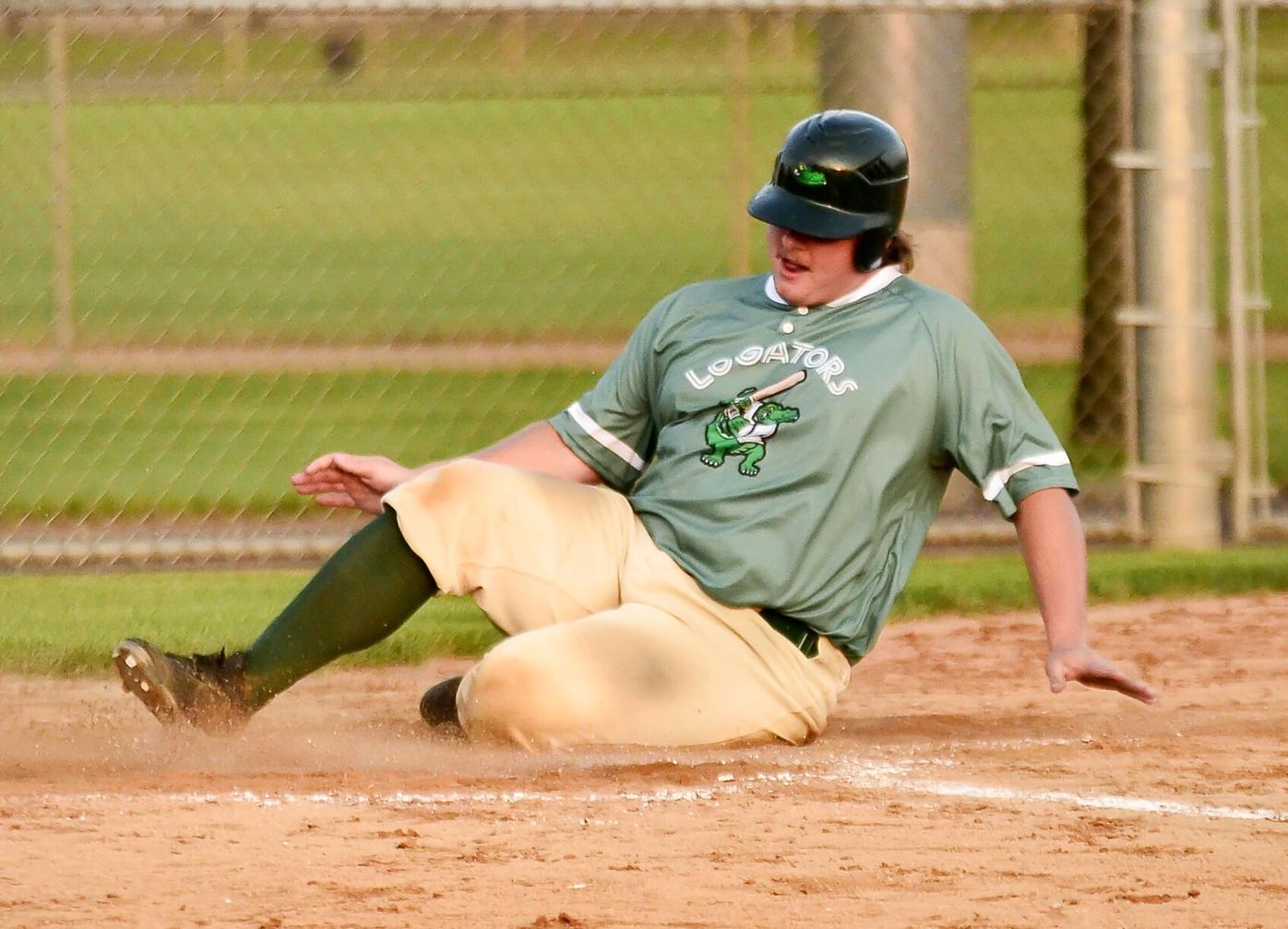 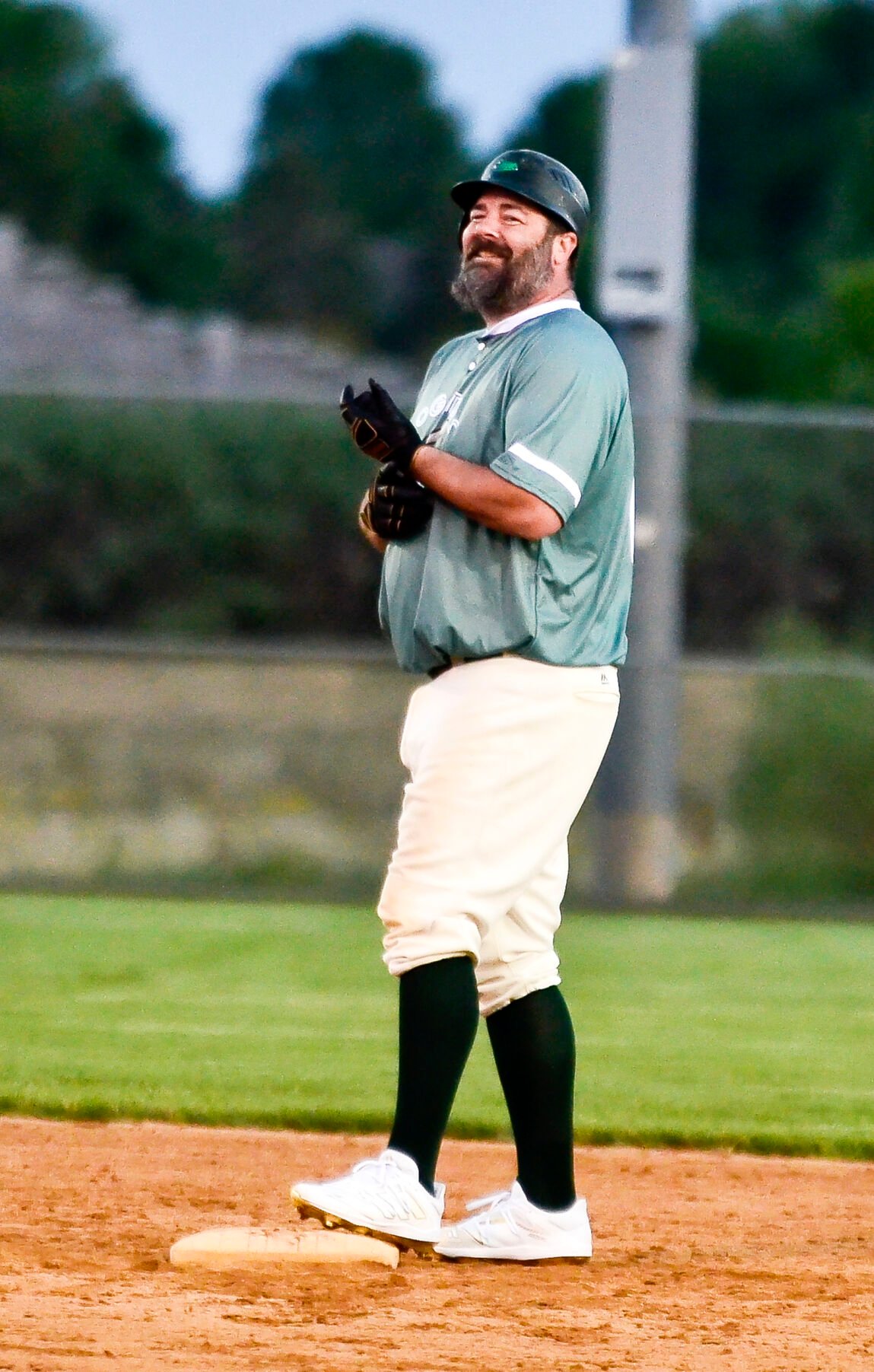 Champlin's Nick Larson shows off his new cleats after a pinch-hit double in the seventh inning July 9 against East Grand Forks at Noble Sports Park. Larson later scored on a sacrifice fly.

Champlin's Charlie Hutchinson throws a pitch in the first inning July 9 in a non-league game against East Grand Forks at Noble Sports Park. Hutchinson struck out 12 in a 10-0 win.

Champlin's Jack Puder tags out Kade Spencer, who was trying to stretch a double into a triple in the fifth inning, July 9 in a non-league game against East Grand Forks at Noble Sports Park. Hutchinson struck out 12 in a 10-0 win.

Champlin's Nick Larson shows off his new cleats after a pinch-hit double in the seventh inning July 9 against East Grand Forks at Noble Sports Park. Larson later scored on a sacrifice fly.

Champlin has a reason to be excited in 2021 as the Class B amateur baseball Logators continue to look dominant as they push toward a Metro Minny League title and another state berth.

The feeling at Noble Sports Park in a non-league game against the East Grand Forks Mass helps to confirm the club’s confidence as the Logators dominated in a 10-0 win in seven innings.

The team looked loose with several players joking around with each other and taking care of business on the mound, in the field and at the plate.

It wasn’t a perfect game by any means with missed opportunities early, a couple of missteps in the outfield and a ridiculous play on a dropped third strike where Mass pitcher/outfielder Connor Richardson jogged at a tortoise pace to first and somehow reached the bag safely because the catcher Ethan Mocchi couldn’t find the ball and the throw was a little off.

But with a 5-0 lead at the time, all Champlin players did was laugh as someone screamed, “Lightning speed.”

While the play was crazy – and no team wants to allow extra base runners – the team was confident to know they were in control of the game and that they would get out of the inning.

“It’s been really good,” catcher and manager Matt Marek said. “We have a really good, a really confident team. We’re deep. We were deep last year but even this year, it’s the same guys but we just feel so much deeper. … It is a luxury to have in town ball to be as deep as we are.

“It has been a really fun summer, and we’re playing well.”

“Come tournament time, we have a lot of options, and really where it comes into play is that last weekend of the state tournament,” Marek said. “We think we have a good shot of winning the whole thing this year. We finally got the monkey off our back last year. I think we felt pretty good about ourselves, but I think we have taken another step since last year.”

The Class B sixth-ranked Logators were 22-8 overall and 8-0 in the Metro Minny League as of July 11 after wins over the Class A Minneapolis MudCats, East Grand Forks and Andover.

And teams around the state are beginning to take notice as Champlin is seen as a legit contender to not only win the Metro Minny League and to make the Class B state tournament for the sixth straight season but to also make a deep run in the state tournament.

There is still a lot of work to be done, with second-ranked Blaine (21-3, 6-1) another serious contender. The two teams play at 7:30 p.m. Thursday, July 29, at Blaine with the potential for the game deciding the league championship.

And this is a little different than the past few seasons where the Logators were third or fourth most of the time. You have to go all the way back to 2010 to find the last time Champlin finished first in its division – though the Metro Minny League was split with the Blue and Red Division back then.

“I talk about it with the guys too, we are the hunted now,” Marek said. “We have always kind of been the hunters, but now the target is on our back. And there’s a month left in the season, and we’re going to see everybody’s best.

There was a game the Logators were hoping to play on July 6 at No. 1 ranked and defending state champion Chanhassen. But the rain took the opportunity of giving the Minnesota baseball world a good gauge into just how good Champlin can be away.

But Marek said that hopefully the two teams will meet in the state tournament if the Logators are able to get there.

“I think everybody was really disappointed,” Marek said. “We were really looking forward to playing them. It is a bummer. They canceled on us last year, and then we got rained out this year. It is what it is. It is baseball. You get weather, and especially in town ball, stuff happens where fields might get double booked.”

Riola dominated on the mound with seven scoreless innings and 11 strikeouts in a 5-1 win over the Minneapolis MudCats on July 7.

The Logators scored once in the first and added four runs in the bottom of the seventh to take a 5-0 lead before Minneapolis got on the board in the top of the eighth.

Riola only allowed three baserunners with a hit and two walks. He also went 2-for-4 with two runs scored, an RBI and a stolen base.

Heuer added two RBIs, and Conlee and Jon Koenig also had RBIs. Heldman was 2-for-3 with a run scored, and Jack Haring and Josh Peterson both added runs.

Dylan Wilson relieved Riola and allowed a hit and a run, hitting a batter, walking three and striking out one in one inning. Peterson struck out two in a scoreless ninth.

Hutchinson took care of business on the mound July 9 against East Grand Forks with six scoreless innings in a 10-0 win.

Hutchinson struck out 12 and stranded the bases loaded in the second, two runners in the fourth and a runner on third with one out in the sixth.

The Mass were short-handed in the first inning with just eight players and no center fielder, but the ninth player arrived to give them nine for the rest of the game. That meant two pitchers who don’t usually bat were in the eighth and ninth spots in the lineup.

Still, Marek said that the rest of the lineup had several college players who could hit the ball well. Hutchinson had two walks, hit a batter and allowed six hits.

“If you were to ask him, I think he would say he probably didn’t have his best stuff,” Marek said. “But he was locating pretty well for the most part – with a tight strike zone too.”

The Logators led just 1-0 for much of the game too before scoring three times in the fourth, once in the fifth and five times in the seventh to walk-off the game.

Champlin took a 1-0 lead in the first with Riola reaching on an error and stealing second. Marek hit a sacrifice fly to get Riola to third, and Mocchi hit an RBI single to right field to bring Riola home.

The offense looked poised to add to its lead in the second, but there were a few base running errors that cost at least one run.

Brening reached on an error to open the inning, and Patrick Perreault grounded into a fielder’s choice. Heldman singled to put runners on first and second. But Perreault had an opportunity to get to third on the play.

Several errant throws on the play by East Grand Forks could have also led to him scoring on the single, but he remained at second base.

Riola then singled to left field, but Perreault fell down as he rounded third base. That left the bases loaded with two outs. Bryce Nelson pinch ran for Perreault after the play, but Marek grounded out to end the threat.

A misplayed angle on a liner to center field led to an extra-base hit by Kade Spencer for East Grand Forks in the top of the fifth. But Heldman made up for the mistake by getting to the ball quickly and getting it to the cut-off man, who then threw out Spencer trying to stretch the hit into a triple.

The offense then came through in the final three innings.

Jeff Heuer was hit by a pitch, and Jack Puder walked. Reid Conlee then reached on an error by the third baseman to load the bases with one out.

Brening followed with an RBI walk, and Nelson singled to left to bring home another run. Heldman made it 4-0 with an RBI sacrifice fly.

Hutchinson stranded a lead-off double in the top of the sixth, and Heuer made it 5-0 in the bottom of the inning by blasting a home run to right field.

Haring pitched a scoreless seventh, and the game was finished with a 5-run bottom of the seventh.

Nick Larson doubled to right field and later scored on a sacrifice fly by Nelson to make it 6-0.

Brening doubled and later scored on an error, and Aaron Urlaub knocked home two runs with a double to left-center field – reaching third base on the throw home.

Aaron Buendorf finished the game with a walk-off RBI single.

“We found a way to get it done, and the bats finally woke up a little bit there at the end. It was a good win,” Marek said. “We’ll take it.”

“They always give us a pretty good game at their park it seems like,” Marek said following Friday’s game against East Grand Forks. “I told the guys to be ready to go, because we can’t slip up if we want to be the champs.”

The Logators didn’t slip up.

They actually battled back from an early four-run deficit to remain undefeated in the Metro Minny League.

Haring was key in relief with eight strikeouts and just one earned run allowed in seven innings.

The alumni game is at 1 p.m. Sunday, July 18, followed by a non-league game against the Tri-City Shark at 5 p.m. at Noble Sports Park.

The Champlin Logators won a Class B state game last year in a shortened season, and it was a key moment in the franchise.