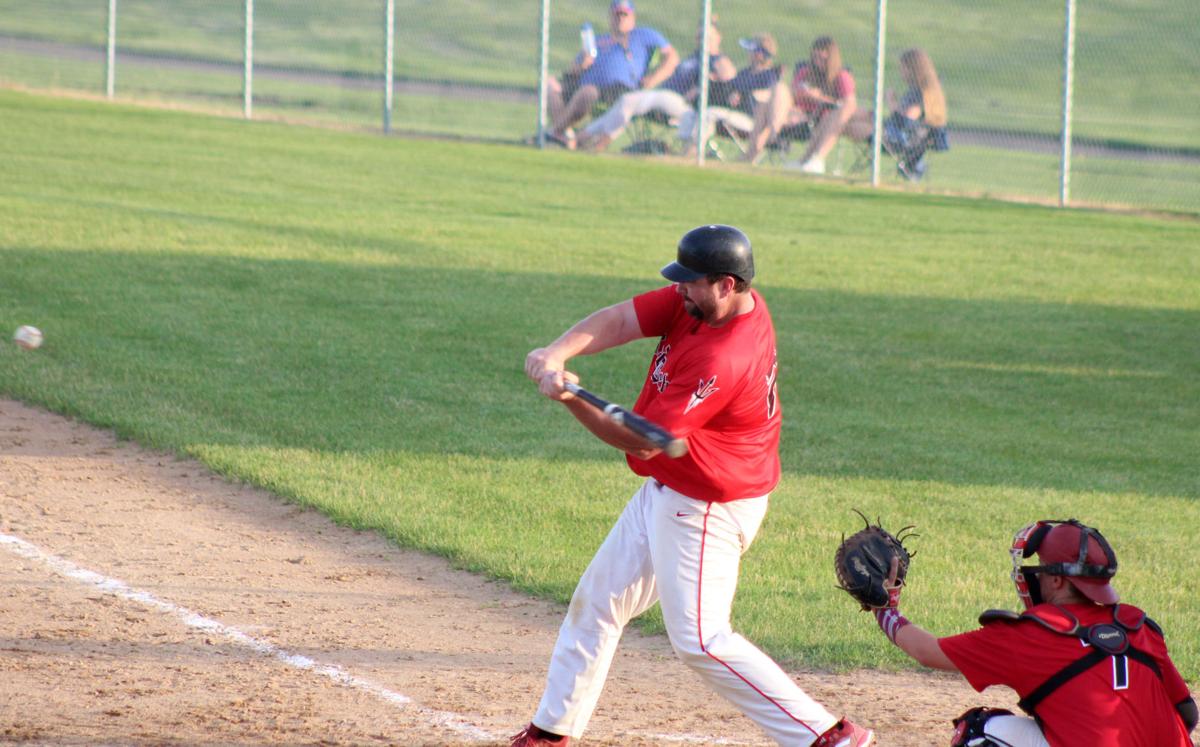 Rogers player-manager Bryan McCallum connected for the game-winning single, and also pitched all nine innings for the Red Devils. 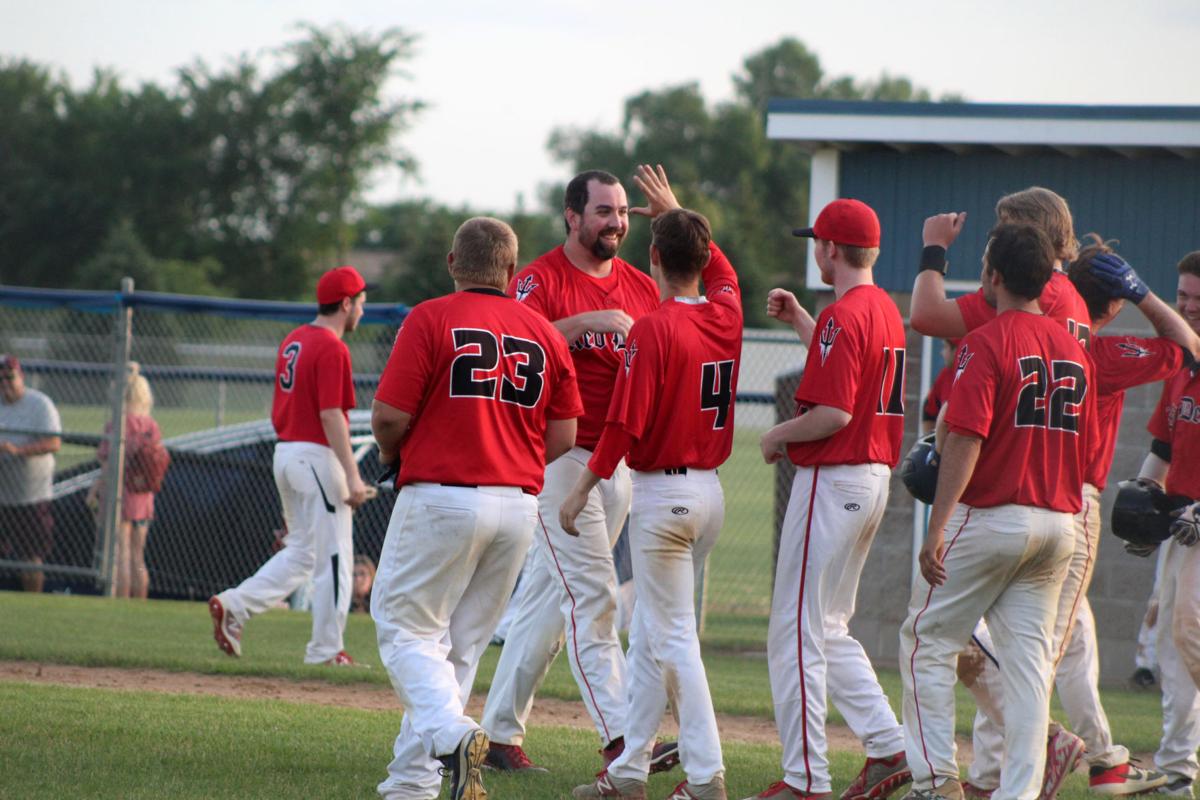 Members of the Rogers Red Devils town ball team line up to offer congratulations to player-manager Bryan McCallum on July 1, moments after his line drive single in the bottom of the ninth inning completed a three-run comeback that gave the Devils a 6-5 walkoff win over the Becker Bandits in Sauk Valley League play. 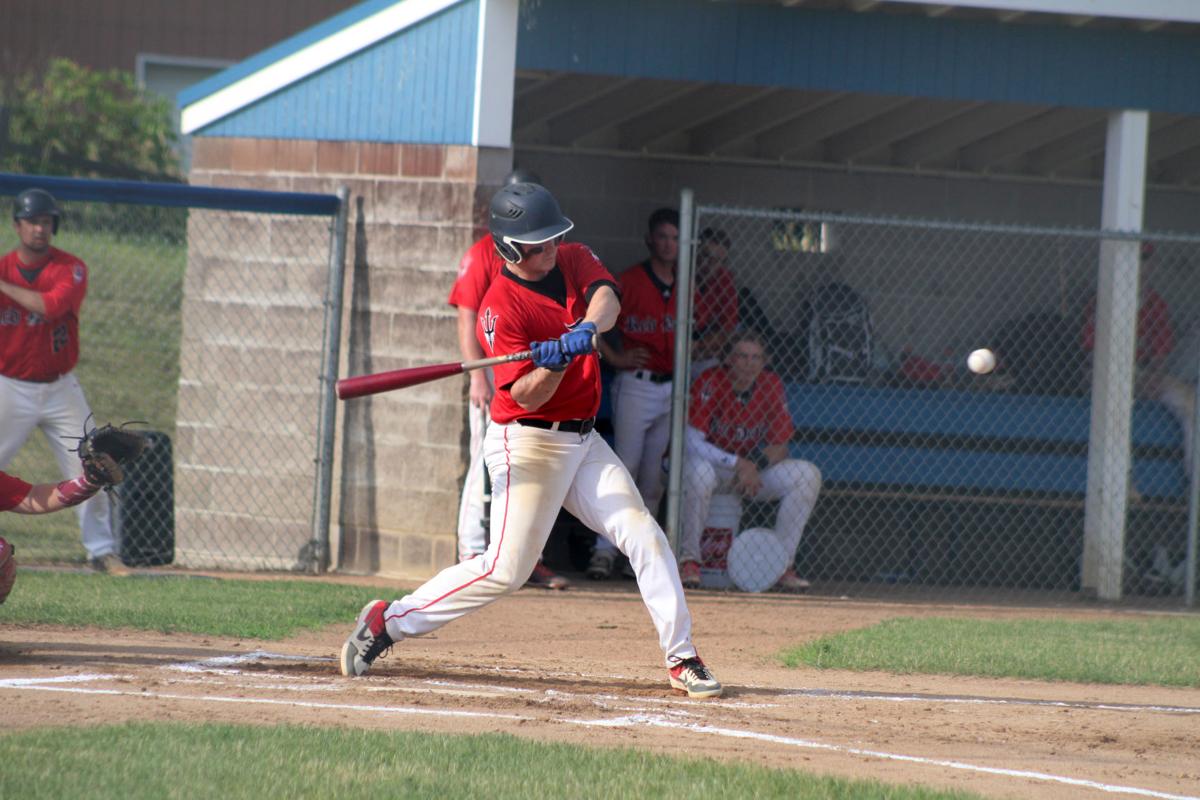 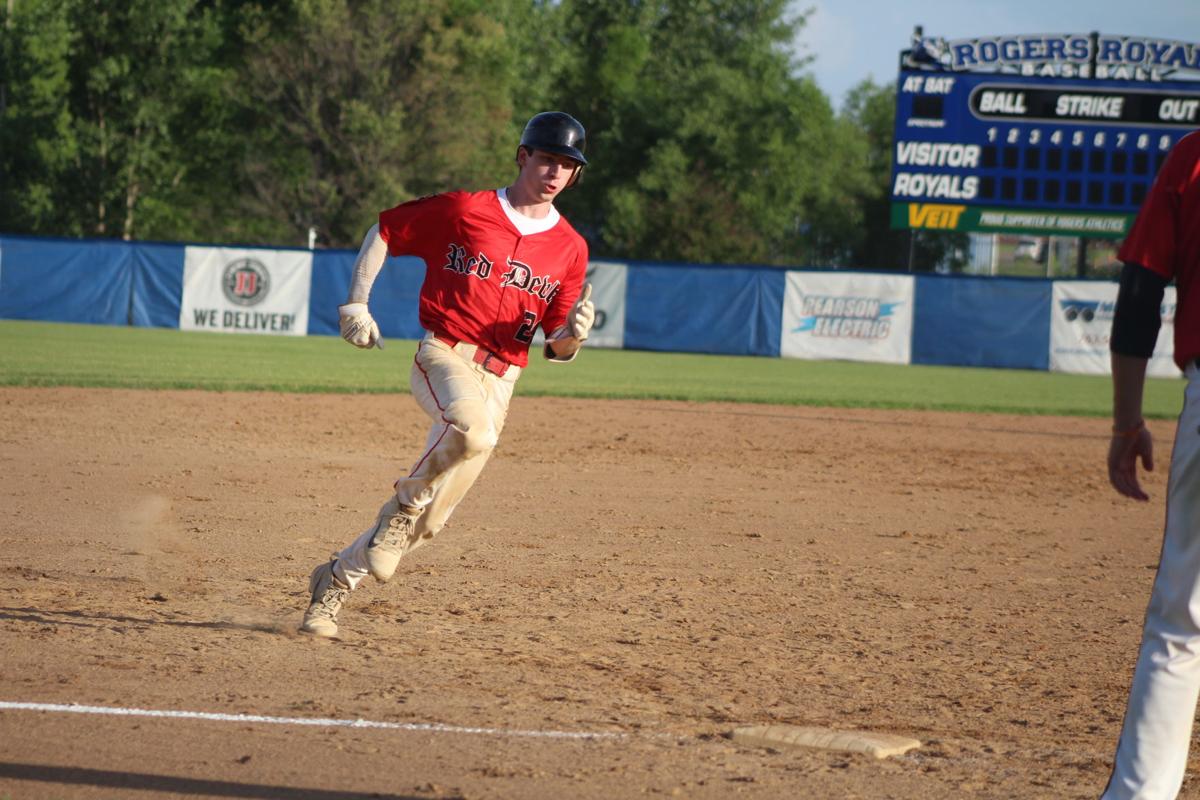 Bryndon Haggerty chugs around third en route to home on a two-run double by Sam Ripley. 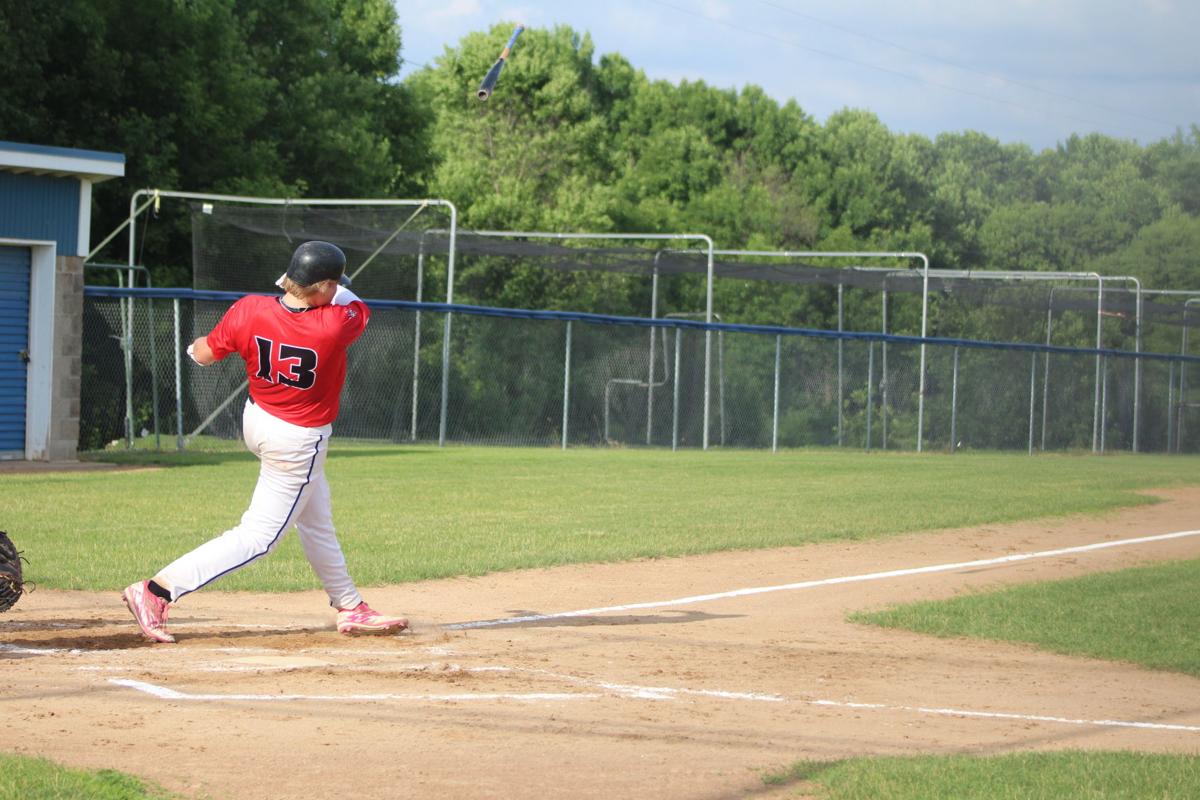 Only because they won, and with sincerest apologies: Logan Kimbler lost his handle on the bat on this swing, and a few of his teammates expressed interest afterward in seeing the resulting photo in print.

Rogers player-manager Bryan McCallum connected for the game-winning single, and also pitched all nine innings for the Red Devils.

Members of the Rogers Red Devils town ball team line up to offer congratulations to player-manager Bryan McCallum on July 1, moments after his line drive single in the bottom of the ninth inning completed a three-run comeback that gave the Devils a 6-5 walkoff win over the Becker Bandits in Sauk Valley League play.

Bryndon Haggerty chugs around third en route to home on a two-run double by Sam Ripley.

Only because they won, and with sincerest apologies: Logan Kimbler lost his handle on the bat on this swing, and a few of his teammates expressed interest afterward in seeing the resulting photo in print.

By the time Bryan McCallum, player-manager of the Rogers Devils came to bat in the bottom of the ninth inning of a game against the Becker Bandits on July 1, his fellow Devils had already erased a 5-3 deficit to tie the game, and placed the potential winning run on third base. McCallum, who pitched all nine innings for the Devil defense, was looking for his first hit of the day, but with only one out on the board, even a sacrifice fly, a squeeze bunt or a well-placed dribbler could have won the game.

That’s not as much fun as a big line-drive hit, though – McCallum turned on a Becker delivery and launched the ball over the heads of the Bandit outfield, allowing Luke Welke plenty of time to jog home from third to confirm a 6-5 Rogers victory.

“It was a well-pitched game on both sides, and we each had our big innings,” McCallum said.

Both McCallum and Becker starter Weston Schug made life difficult for opposing batters early on. The Bandits managed only one unearned run through five innings before adding two in the sixth.

Rogers battled back for three runs in the bottom half of that inning. Ryan Davidson and Luke Selken led off with singles, both on two-strike counts, and later Bryndon Haggerty also singled to load the bases. Eric Simon brought in one run with a sacrifice fly, then Sam Ripley socked a two-run double to even the score at 3-3.

Becker answered with two more runs in the seventh, which created the dramatic tension for the Rogers’ walkoff ninth. Logan Kimbler started the last-gap rally with a single. Dustin Carlson hit a ground ball that was gathered by Becker shortstop Kreeden Blomquist for a possible double-play, but he sailed his throw into center field. Adam Kruger entered the game to run in Carlson’s place. Welke came to bat next and reached on another Becker error, which also allowed Kimbler to score, Kruger to move up to third and Welke to go to second.

Davidson knocked Kruger home with a single to tie the game at 5-5, which put Welke, the soon-to-be winning run, on third. Becker managed to hold him there for one at-bat, a groundout, but then McCallum came up and ended the game with his line drive.

“It’s unfortunate [Becker] had to lose in that way, but we’ll take a win,” McCallum said. “I was really surprised they didn’t walk me.”

The victory moved the Devils’ record to 3-2 on the year. The game marked the long-delayed home opener for the Devils: Town team baseball usually starts up in April or May in a normal year, but restrictions relating to COVID-19 pushed the start of the season into June. July 1 was the first chance the Devils had to play a game on their home field, the Rogers High School diamond.

“Even though we weren’t allowed to use the field for games for so long, we were still able to come out and practice, so we were doing that at least once or twice a week,” McCallum said. “We’re slowly filtering back into what we’d normally be doing at this time of year. I know I wouldn’t have been able to [pitch] nine innings a couple of weeks ago.”

The Devils were scheduled to play at home on Tuesday, July 7, after the press deadline for this edition, and will appear at home only one other time in an abbreviated regular season, on Sunday, July 12 at 5 p.m. against a Sauk Valley League, East division foe, the Albertville Villains. The Big Lake Yellow Jackets, Monticello Polecats and Becker complete the division roster.

McCallum, a 2009 Rogers High grad who also played at the University of Northwestern, has been involved with the town ball team for a decade and is in his second season as player-manager. He hopes to grow the Devils roster by the inspiration of success on the field.

“Last year, we had some issues getting guys to games,” McCallum said. “This year, we want to be at least .500 and we want to build for the future. If high school kids and Legion kids see that there’s a chance to keep playing baseball and to be successful and be competitive, they’re going to want to come out and play. That’s our goal, to provide that opportunity for other players.”

In this shortened season, the end of the regular season is already just two weeks away, with playoffs to follow. The Devils and their leaguemates are members of Class C in the Minnesota Baseball Association setup. Teams that do well in the postseason can move through Legion and regional tournaments and advance to a state tournament, which traditionally holds its final title game on Labor Day each year. Hosting duties for the 2020 state tournament are to be shared by New Ulm and Springfield.

On other area diamonds

The Red Devils’ walkoff win was the thrilling moment of the local town ball slate last week. Other area teams also enjoyed success on the diamond.

The Loretto Larks took care of the Litchfield Blues 6-3 on July 5, with Colton Petron taking the win on the mound. Loretto also scored a big 11-1 win over the Jordan Brewers on June 30 and took a 5-1 loss to the Hutchinson Huskies on June 5, settling their record at 2-2 as of press time.

The Larks, members of the Class C North Star League, hosted the Buffalo Bulldogs on Wednesday, July 8 after press time and will make trips to Albertville (Saturday, July 11 at 7:30 p.m.) and Maple Lake (Sunday, July 12 at 2 p.m.) before returning to Arnold Klaers Field on Wednesday, July 15 for a 7:30 p.m. start against Dassel-Cokato.

The St. Michael Saints, members of MBA Class B and the Metro Minny League, won 11-1 over the Centennial Cougars on July 1. The Saints were set to visit Coon Rapids on July 7 and will be back in action on July 15 at 7:30 p.m. on the road against the Champlin Park LoGators.