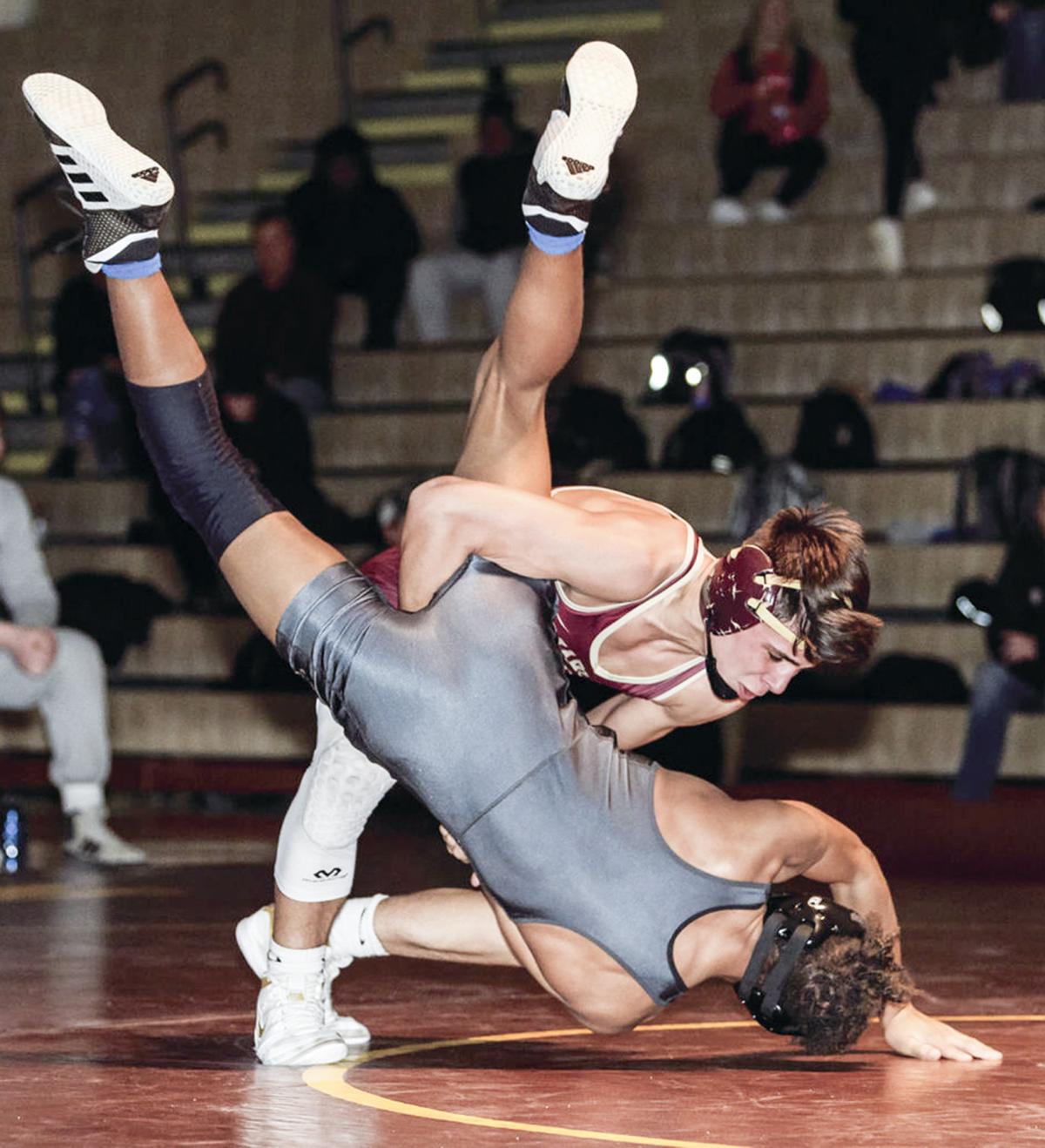 Maple Grove freshman Max Johnson breaks down an opponent earlier this season. Johnson, who made state as an eighth grader, earned an honorabl mention in the Northwest Suburban Conference this season despite missing a few duals due to a concussion. 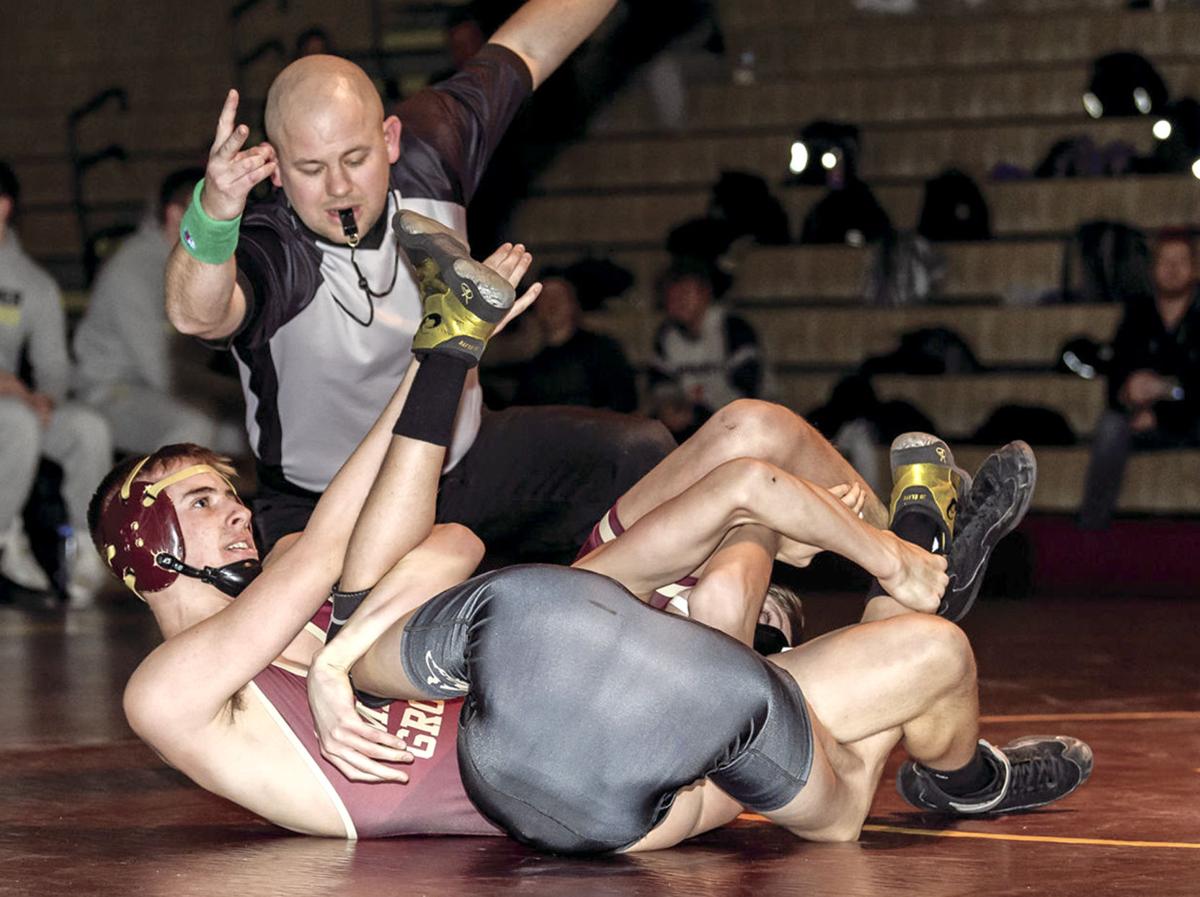 Maple Grove senior David Grant goes for a pin in a match this past season. Grant was named an All-Northwest Suburban Conference honorable mention.

Maple Grove freshman Max Johnson breaks down an opponent earlier this season. Johnson, who made state as an eighth grader, earned an honorabl mention in the Northwest Suburban Conference this season despite missing a few duals due to a concussion.

Maple Grove senior David Grant goes for a pin in a match this past season. Grant was named an All-Northwest Suburban Conference honorable mention.

Senior 195-pounder Johan Rodvik and seventh-grade 113-pounder Ben Schultz were both selected to the All-Northwest Suburban Conference team this season.

“We had a pretty young team, and so it was exciting to see some of the young wrestlers do as well as they did,” coach Troy Seubert said. “It was fun to watch them progress throughout the season.

“And then obviously, the older guys … they are great leaders for us and set a good example throughout the season. To see them do well and earn their accomplishments is always fun because it reflects many years of hard work.”

Schultz finished 28-17 overall this season and finished fourth overall in the 5AAA individual section tournament. He was the first seventh-grader that Seubert can recall earning an all-conference selection.

Seubert said that Schultz doesn’t wrestle like his age and is a very accomplished young wrestler.

Schultz made the jump to varsity right away and didn’t wrestle any JV matches, and he believed he should be winning those varsity matches from day one, Seubert said.

And Schultz was able to win some close matches and earn wins against good opponents along the way, Seubert said.

“You can stick him in the room or stick him against any opponent, and there’s just a maturity about him, that sense of belonging,” Seubert said. “He is definitely not a cocky kid, but the confidence of believing that he should compete at that level took him a long way this year.

“He is a very talented wrestler, but physically he is going to continue to improve as well. So he has a very bright future ahead of him.”

Rodvik was 36-13 overall and also took fourth in the section tournament. Seubert said that Rodvik probably had the best season out of any Maple Grove wrestler this year.

He was also a person to look up to within the program, Seubert said.

“I think that the impact that he had on our program over the last six years really kind of came together this year,” Seubert said.

“He didn’t have his best tournament of the season at the section tournament, but he was a guy who, when he was on, could beat anybody,” Seubert said.

Grant finished 19-26 and placed fifth at sections. He improved by nine wins from his junior season.

Seubert said that Grant would do anything asked of him and do so as best he could. Another six-year wrestler in the program, Grant showed up every day and was as committed as anybody.

“By the end of his career, he was beating a lot of kids that probably were beating him years prior simply because he outworked them and knew what he was trying to do out there,” Seubert said. “He had a great season, and I think he got the most out of talents, which is always the goal.”

Johnson finished 30-10 and came the closest to making state this season with a third-place finish at sections, and Seubert said he is extremely valuable to the program from both a wrestling and a leadership standpoint.

Seubert said he probably would have been all-conference this season but missed some conference duals due to a concussion, and he is probably going to grow from the experience of falling just short of qualifying for the Class 3A state meet.

Johnson did make state as an eighth-grader with a 34-16 record and will look to get back there as his career continues.

“He is a far better wrestler this year, it just happened that his bracket was much tougher this year,” Seubert said. “He is a guy who belongs at the state tournament, and he’ll get back there in the near future – and I think multiple times in the coming years.

“He’s quick. He’s strong. He’s gifted. He’s hard-nosed. He prides himself on being the hardest worker in the room, and I think he has a lot of success in front of him.”

Klopfenstein didn’t wrestle at the individual section. His last match of the season was in the team section. He finished 16-21 overall this season and improved by 12 wins from the year before.

Klopfenstein was giving up a lot of weight as an eighth-grader. He was around 95 pounds and was able to push 100 pounds by eating a lot before weigh-ins. His 4-20 record was not due to his technique or his wrestling ability but was due to his size.

Klopfenstein put in a lot of work in the offseason and gained strength and size to move up to the 120-pound weight class, but that also forced him to have to relearn his wrestling style.

Before he was giving up weight, and now he was the same size as opponents. Seubert said it created bad habits that the coaching staff tried to help him fix throughout the season.

“It was great to see him have success in the conference matches,” Seubert said. “I think he’s another guy who still has untapped potential. He doesn’t realize how good he is, and when he does, it is going to come together in a big way for him, I think.”

Johnson. Schultz and Klopfenstein are all expected back next season, and Rodvik and Grant were the lone seniors rostered at the team section with 13 wrestlers being sophomores or younger which means Maple Grove is going to be young again for the 2020-21 season.

Seubert said he is excited for the future of the program because to bring back so many improving varsity wrestlers year after year is not what traditionally happens in high school wrestling.

There are also a lot of second-year wrestlers that will improve as they get more mat time and more experience.

“There is a ton of athletic talent,” Seubert said. “Unfortunately, we had a lot of kids excited to wrestle this spring – wrestle some freestyle and do some camps this summer. Unfortunately, that’s not happening, but I think there’s a lot of excitement involved with the program. These kids realize that they have some great opportunities in front of them.

“It is hard to look at any of those kids that were on that section roster and say, ‘This kid just probably doesn’t have what it takes to qualify for the state tournament.’ I believe that all of them have an opportunity to be a state-tournament caliber wrestler if they continue to push themselves and work for it.”

The Maple Grove wrestling team entered the season already a very inexperienced team with many underclassmen. But they got even younger when th…