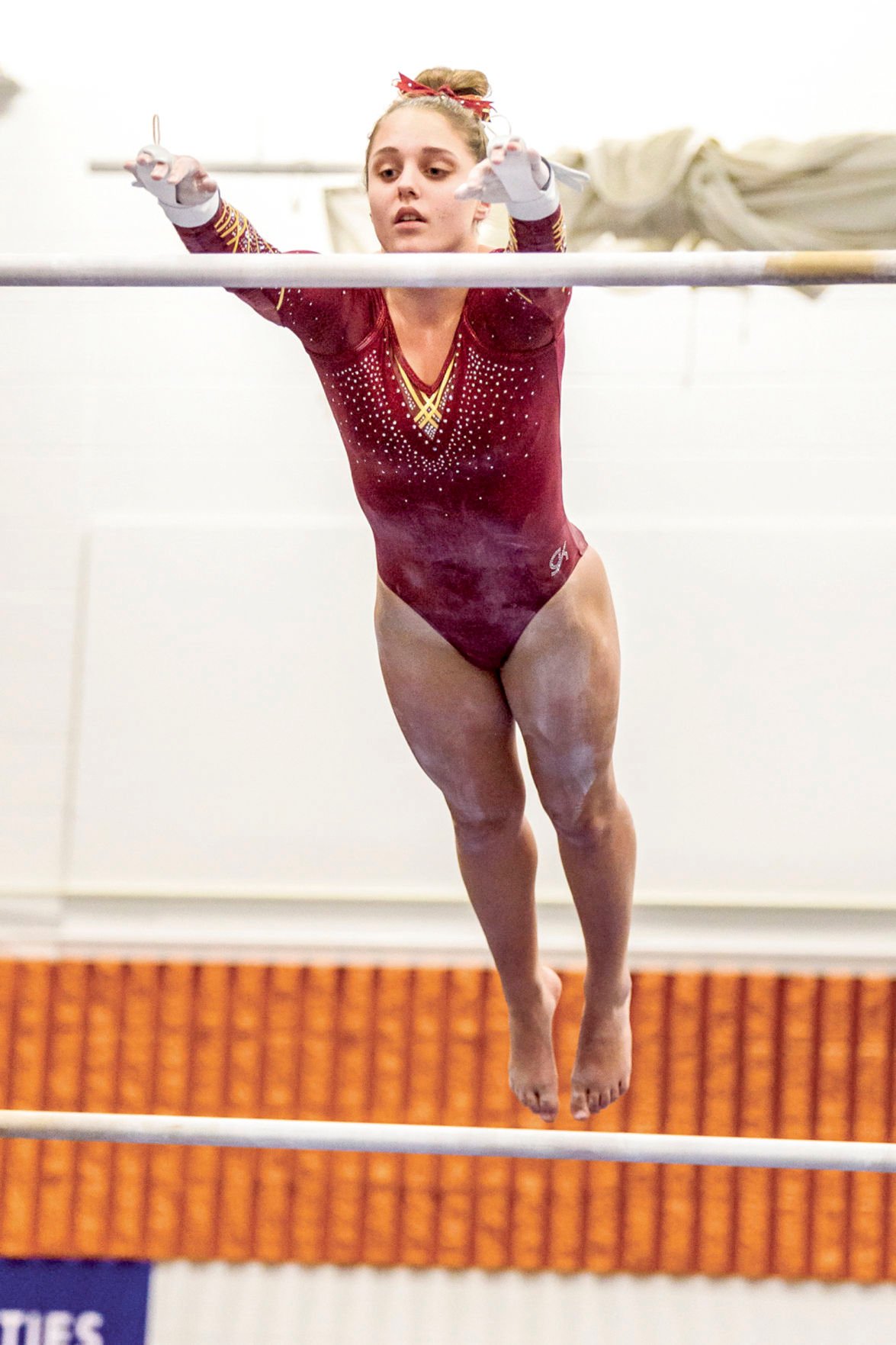 Maple Grove senior Nadia Abid performs on the uneven bars in the Osseo meet during the 2019-20 season. Abid, who was named the 2020 Athena Award winner for Maple Grove, won the balance beam state gold in the Class 2A state meet this season and is a three-sport athlete. 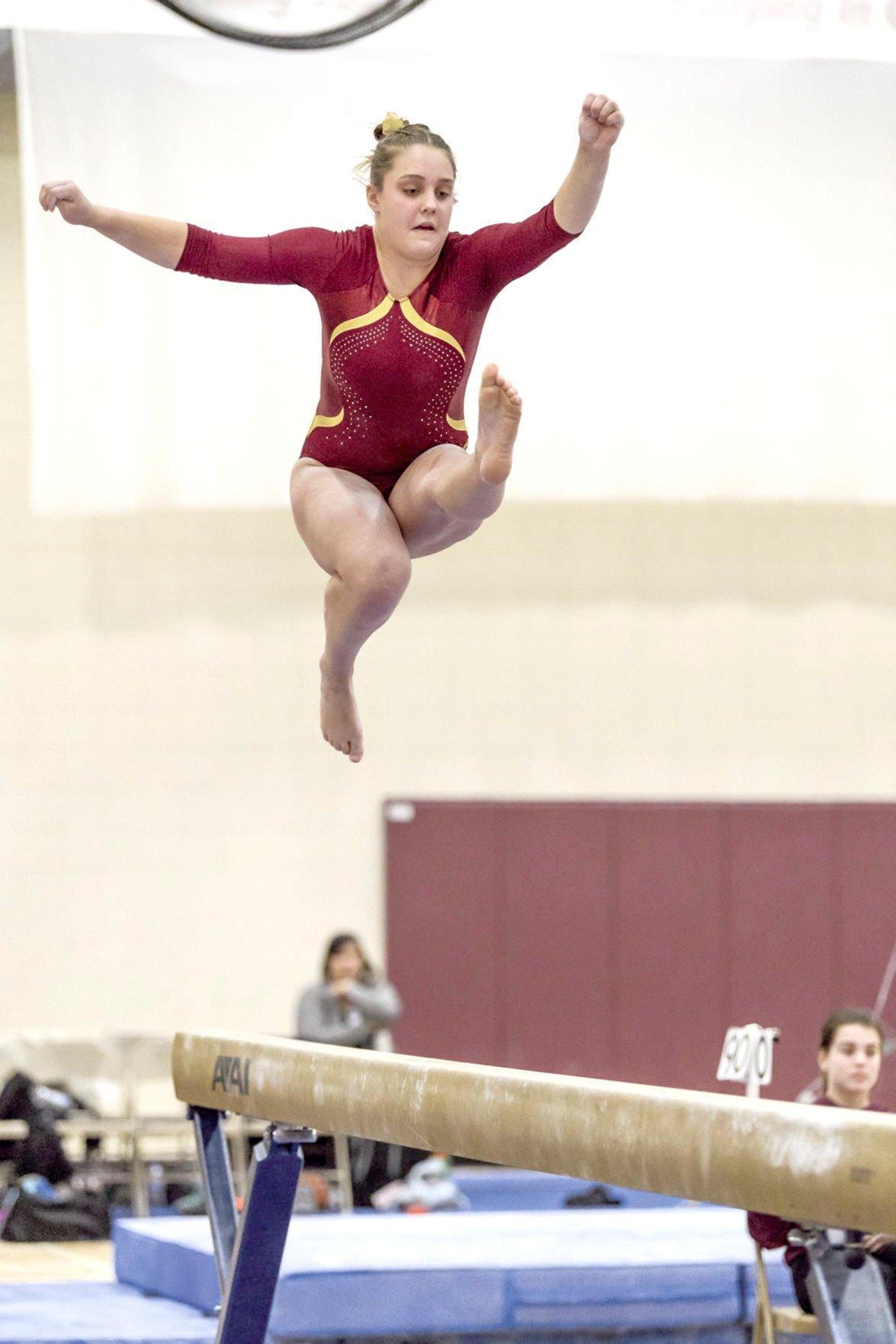 Maple Grove's Nadia Abid performs on the balance beam as a sophomore. Abid took second at state as a sophomore and won the individual title as a senior.

Maple Grove senior Nadia Abid performs on the uneven bars in the Osseo meet during the 2019-20 season. Abid, who was named the 2020 Athena Award winner for Maple Grove, won the balance beam state gold in the Class 2A state meet this season and is a three-sport athlete.

Maple Grove's Nadia Abid performs on the balance beam as a sophomore. Abid took second at state as a sophomore and won the individual title as a senior.

Maple Grove senior Nadia Abid didn’t even know the Minneapolis Athena Award was an award that she could win until this year.

But Abid already had the resume to be in contention for the award. She is a three-sport athlete involved in the community with academic accolades, and it helped lead to her to win the 2020 award for Maple Grove, joining a list that began in 1998.

“It was just a big accomplishment because I didn’t even know I was doing it for something,” Abid said.

Abid has 11 varsity letters in her high school career with gymnastics being her main sport where she competed on varsity for five years. She also played three varsity seasons each for swimming and diving and track and field.

Gymnastics was where Abid excelled. She was a captain this past season and was named the MVP of the team for all five of her varsity years.

Abid earned five conference and five section awards, and she had six Class 2A state awards, including the state beam title this season.

She was also named to the All-State Elite list, being in the top five for all-around in the state, and she helped the Crimson make state as a team twice in her five years with the program.

Abid said that she believes her gymnastics accomplishments were key with winning the Athena Award because it was a sport she had been doing more than any others and one that she was able to have a lot of success with.

“I feel like I worked hard doing gymnastics because I loved it more,” Abid said.

Fittingly, Abid wrote in her Athena Award document that she has kept every wristband and grip she has ever worn, even if she doesn’t use them anymore, in her bag and keep them with her at every meet and practice.

That includes grips from Abid’s first days of learning the sport when she was five, and it is important to her because it motivates her to keep going and to try and be better, she said.

“I keep all of those things because it reminds me about how long I have been doing this sport,” Abid said. “I think it’s cool that I can look back at those and see how little I was when I first started. It’s cool that I still love the sport as much as when I was 5 years old.

“I feel that if I didn’t have that, I wouldn’t have been as successful this year.”

As a diver, Abid was named the team MVP once, and she added two conference awards.

Abid decided to try diving to see what another sport could be like after training for gymnastics most of her life. It also helped that some other gymnastics teammates were already on the diving team.

“I thought it was a good experience,” Abid said. “Gymnastics definitely helped me in diving, so I thought it was cool that I could turn gymnastics into a completely different sport and it just taught me a lot.”

Of course sports are not the only aspect looked at when choosing Athena Award winners. Community involvement, extracurriculars and academics also play a role in the selection, and Abid has several items that helped her in those areas.

Abid is a five-time All-Section Academic selection and has been on the A Honor Roll all four years of high school. Abid has also lettered in academics.

But balancing athletics and everything else was actually something else Abid said she was good at, even helping her succeed even more.

“I feel like I do better when I have more things on my schedule – more practices or go to Feed My Starving Children with my sisters or volunteering at the triathlon,” Abid said. “It keeps me on track and keeps me out of things I don’t need to be doing. I think if everyone had sports and volunteering and school and bigger goals, then I think that everyone would do better because they are always busy.”

Abid is expected to remain busy as she continues her gymnastics career at NCAA Division III Hamline University in St. Paul.

The university is one Abid is very familiar with after going there for gymnastics camps as early as 13-years old. She met the head coach during the camps and enjoyed the way the campus looked, and Abid said she also loved meeting the past team members during the camps.

The environment and atmosphere reminded her of how it felt to be on a team at Maple Grove, Abid said.

“I’m really excited,” Abid said. “I’m super proud of myself for being able to say that I can do college sports because it does take a lot of hard work to be able to do your sport all through high school and then go to college.

“No matter how well I do in college, I think it is really cool that I even get to be a part of it.”

Besides gymnastics, Abid is also going to be studying business. She said she loves to travel, so international business is something that drew her attention.

“I like going around the world and seeing things, and that just comes with business,” she said.

Abid’s senior season has also been affected in other ways due to the pandemic, which now includes no in-person graduation ceremony. Distance learning is in place instead of going to class, and spring activities have been canceled, as well.

Abid said it has been tough, but she has also had some positives come out of the changes.

“I’ve gotten more time with my sisters because I am not always at practices,” Abid said. “I’ve gotten to be outside more, and we’ve gone to do other volunteering experiences, that normally we don’t have time to do that.

“It does suck that my senior year is over, but I am not going to dwell on it because I just have so much more ahead of me.”