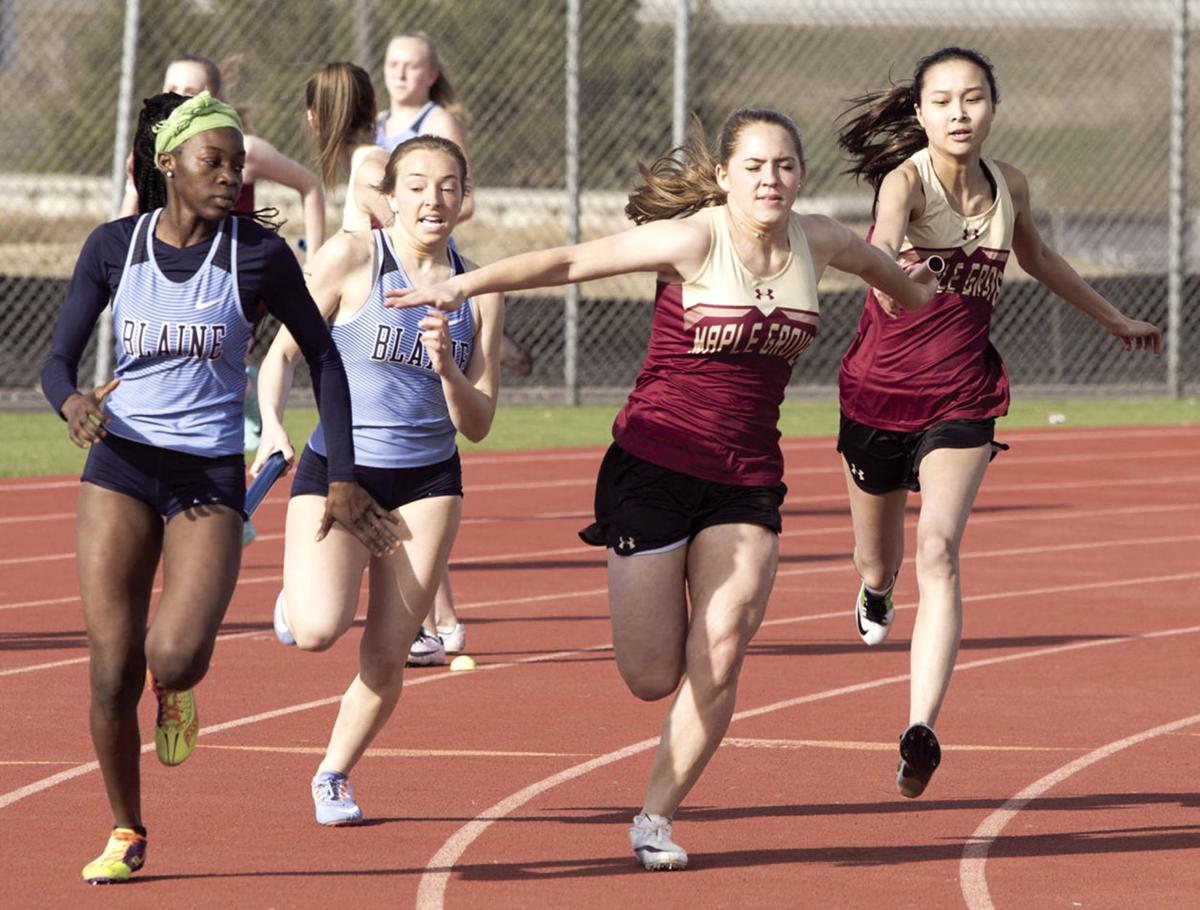 Maple Grove senior Heather Khieu hands the baton to junior Emma Fournier in a meet against Blaine in 2019. 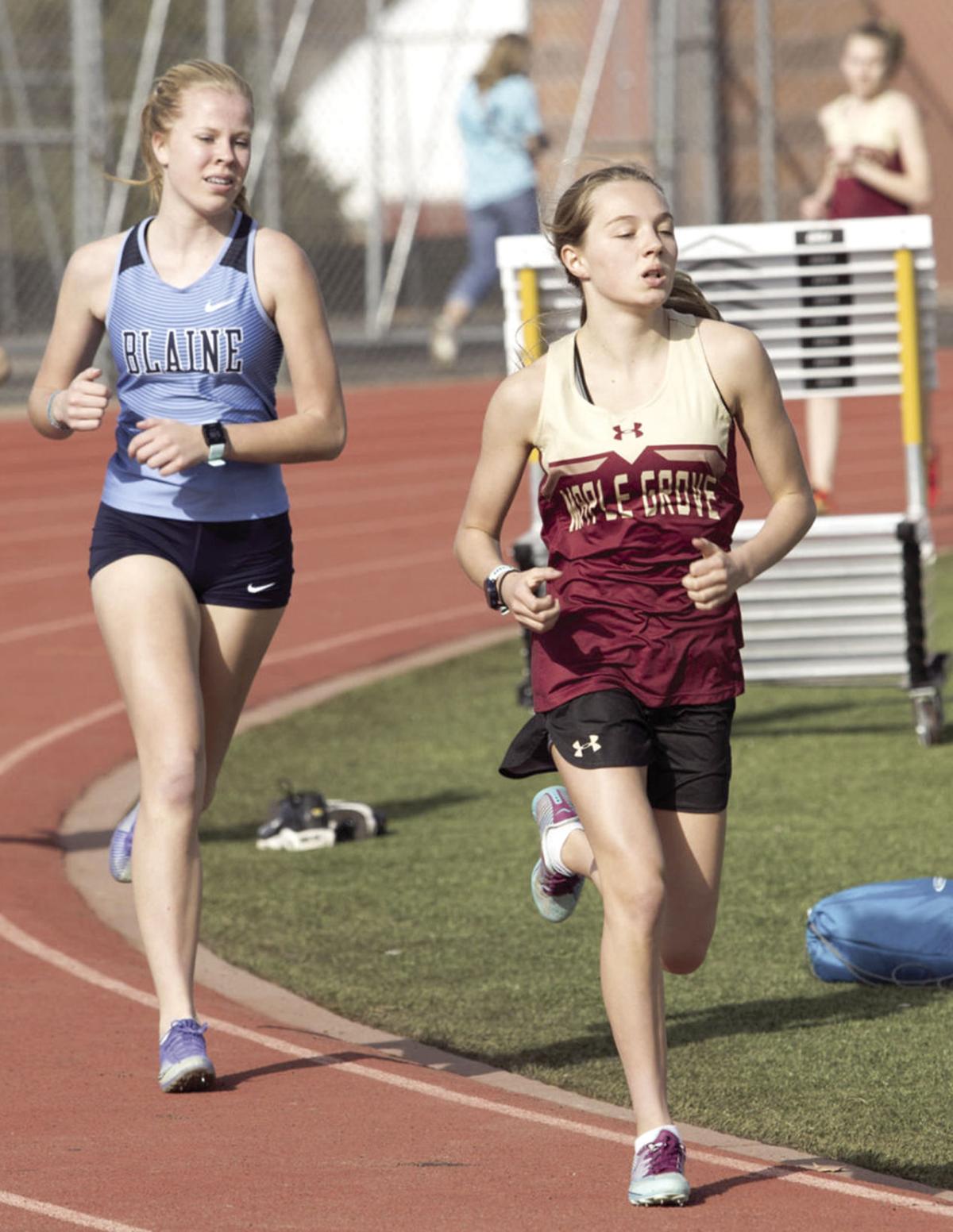 Maple Grove sophomore Lindsey Young races in the 3,200 against Blaine in 2019.

Maple Grove senior Heather Khieu hands the baton to junior Emma Fournier in a meet against Blaine in 2019.

Maple Grove sophomore Lindsey Young races in the 3,200 against Blaine in 2019.

But big things were expected in 2020 with that younger group and a mixture of “high-caliber” seniors – including Lauren Tillman, Heather Khieu, Madison Stoltzman, Elise Adix, Anna Beaverson and Christina Bolcer.

There were only a few days of practice before the season was first suspended on March 13, but coach Jen Riewe said that there was excitement and a lot of talk about achieving goals together.

And unlike previous seasons when outside practices were delayed due to poor weather and snow still being on and around the track, this past spring was warmer which allowed for the girls to be outside on day one.

Even during the initial suspension of the season, the excitement remained as the team kept up with training with the hope of getting in at least a few weeks of a season.

Coaches gave training regimens to athletes during the wait-and-see month before the season was called off, and through limited communication, they knew that the girls were doing all they could to remain in shape and stay strong for potential meets.

But as time went on and the season was officially canceled on April 23, everything began to set in.

“To go through those layers of cancellations was just really difficult – to see that disappointment slowly kind of spread throughout the team and to kind of take away the fun and the things that they were looking forward to,” Riewe said.

Riewe said that a number of athletes already mentioned how much they miss being on the track, in the field event areas and just the feeling of camaraderie with teammates.

Riewe is working with coaches to try and put together an alumni night to give the seniors who missed out on their final high school year a chance to relive some moments at Maple Grove.

“Just to be able to come back home next year for those seniors and have that chance just to enjoy some time together,” Riewe said.

Looking back at 2020 seniors

The Crimson will miss out on both leadership and development with the loss of the 2020 season.

Several seniors were looking to have success and several also helped bring up younger athletes, as well.

Tillman was expected to be one of the top mid-distance runners and had a personal best time of 2 minutes, 22 seconds in the 800 in 2019, even with some injuries.

“She really had a strong cross country season, so we knew she was probably going to have her best track season and put not only herself in position to qualify for state but also our 4x8 team,” Riewe said.

Tillman helped the 4x800 relay take fourth at sections in 2019 with sophomores, Norah Trost and Lindsey Young and Beaverson. She also joined sophomores Rachel Berscheid, Lauren Lee and Trost to take fifth with the 4x400 relay at sections last season.

Tillman finished fifth to medal in the 800, as well.

Stoltzman is a mid-distance/distance runner that was also a team leader with her work ethic and attitude, so a lot of leadership was expected from her.

Adix was one of the top high jumpers, finishing eighth at sections in 2019, and she continued to improve.

“She made significant progress each year and really started helping to develop the underclassmen as a part of that,” Riewe said. “It wasn’t just about performance for her. She also was a good role model.”

Senior Christina Bolcer was another runner at sections last season – taking 13th in the 3,200.

And while it is disappointing to lose a season – especially for the 2020 seniors – Maple Grove does have a lot returning in 2021 and is expected to have several strong athletes.

Junior captain Delanie Siewert will be a senior in 2021 and is one of the top jumpers on the squad. She finished fifth in both the long jump and triple jump in sections last season.

Siewert was also looking to become a sprinter in 2020.

“She had an incredible season last year, and I really felt like she was coming into the season strong,” Riewe said. “She also had a good basketball season, so that gave her that added edge of speed that she was ready to utilize on the track.”

Junior Sydney Kowalski – who finished tied for 11 in sections in the high jump, took 11th in the long jump and tied for 16th in the pole vault – is expected to be key as a senior leader in 2021, and Young is looking to remain a top distance runner after taking third in sections as a sophomore in 2019.

Eighth-grader Kelsey Young is another distance runner expected back next year, and Ellen Ozerova is also expected to be strong in the mile after taking 17th in sections last year.

Some other top field athletes expected back in 2021 are sophomore Julia Barton and freshman Audrey Kormann. Barton was 10th in the pole vault at sections in 2019.

And then there is the depth with the sprints.

Riewe said that there are so many girls within hundredths of a section of each other that it is hard to even put a name on who might be higher on the depth chart. And the goal next year will be to try and have girls focus on one event or relay to maximize potential.

“I am really excited to see what happens with the girls sprint group because we have a lot of talent in that area,” Riewe said. “They knew a varsity spot was going to be really tough, and they were going to have to work for it. I definitely think that that is going to be the vibe again with that group next year.”

Fournier and Brant will be seniors in 2021, and sophomores Ella Markve, Rachel Lee, Berscheid and Williams are all expected to be in the mix for sprint spots next year.