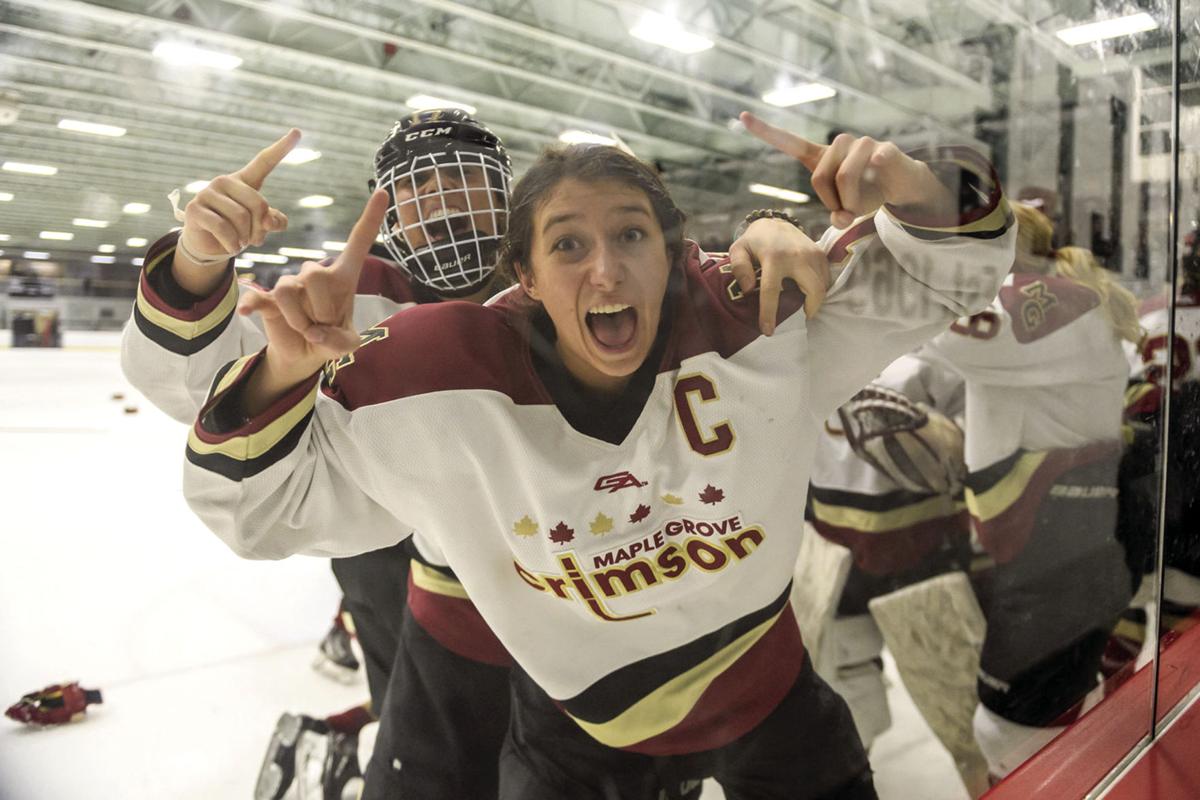 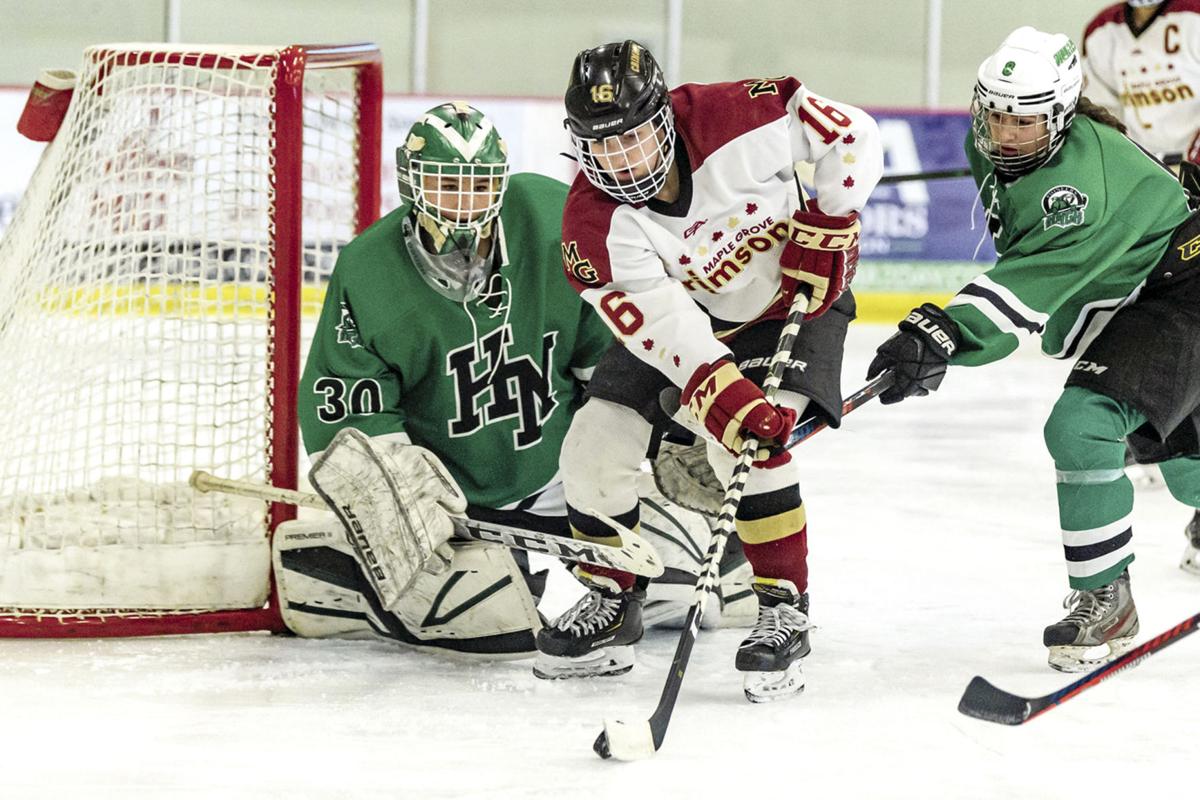 Maple Grove junior forward Lauren Stenslie, pictured in the crease on a scoring chance Hill-Murray in January, was named to the All-Northwest Suburban Conference team. 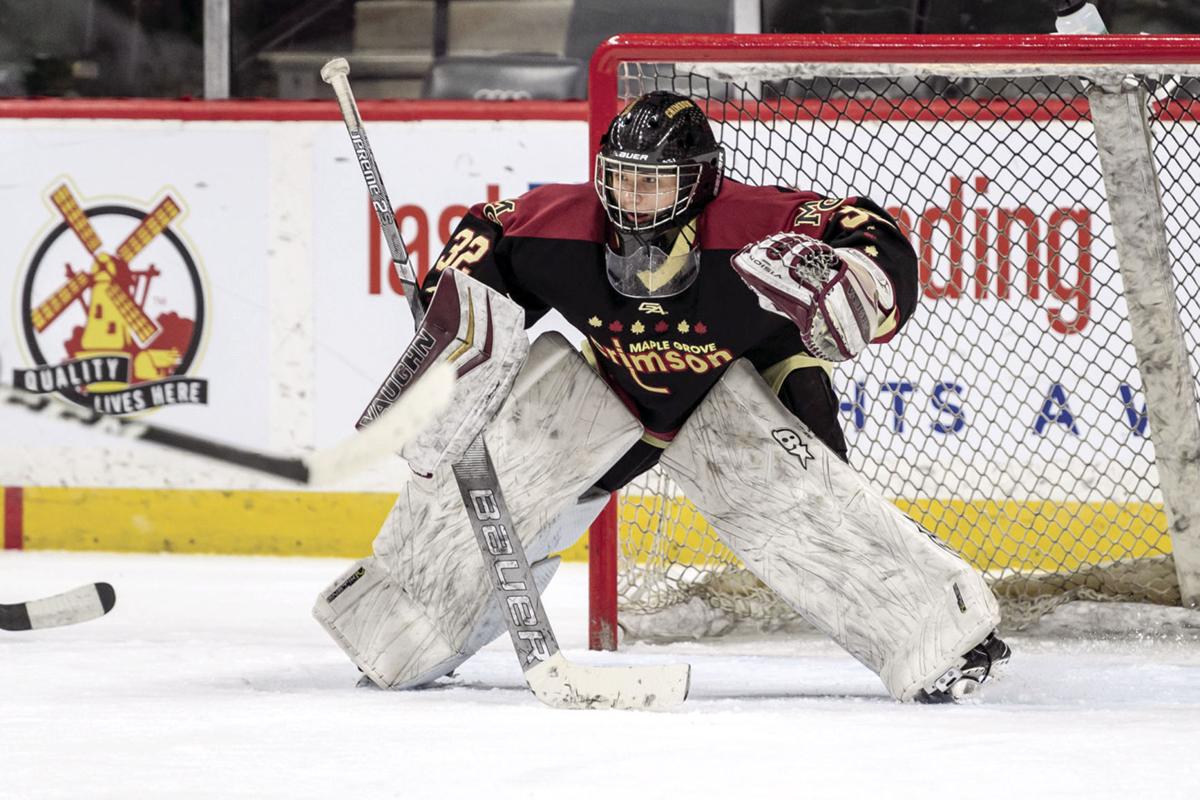 Maple Grove junior goalie Brooke Cassibo stands in the net during the Class 2A state tournament this season. Cassibo was on the All-Northwest Suburban Conference team and also made the All-State tournament team.

Maple Grove junior forward Lauren Stenslie, pictured in the crease on a scoring chance Hill-Murray in January, was named to the All-Northwest Suburban Conference team.

Maple Grove junior goalie Brooke Cassibo stands in the net during the Class 2A state tournament this season. Cassibo was on the All-Northwest Suburban Conference team and also made the All-State tournament team.

Maple Grove coach Amber Heglund said all five all-conference players could have been named All-State honorable mentions because of how each player made the other better.

“The reason that Tristana and Jenna Timm achieved those awards is that they have great teammates around them that make them better than they can be on their own and support them and allow them to shine and to be noticed,” Heglund said. “Likewise, the other way, Tristana and Jenna complement other players on our team extremely well.

“One of the things that we share with our kids all the time is that individual awards come from great teammates.”

Corbin and Machlitt finished their high school careers this season, helping the fourth-ranked Crimson finish fourth overall in the Class 2A state tournament a year after helping them win a state consolation title.

Maple Grove was 21-8-1 overall and have been to the Minnesota State High School League state tournament three times – the other appearance coming in 2015-16 when the Crimson made the state final.

The program is expected to have more success with Tatur, Timm, Stenslie, Cassibo and Stelljes forming a core of future seniors.

“I think they should be excited for what they have created for themselves,” Heglund said. “We continued to put more and more pressure on them, and they just rose to the occasion. And it had a lot to do with – they are determined to be the best group that they can be and leave it all out on the ice.”

Heglund said that the difficulty of the section doesn’t guarantee another state berth, but the girls already showed confidence after state this year that they can be back in a position to challenge for a title.

Seeing players grow from not knowing if they can win to thinking they can win to expecting to win is a fun transformation, and Maple Grove has reached a point that they expect to win, Heglund said.

“They expect that from themselves,” Heglund said. “They are going to put in the work so that they give themselves the best chance to win.”

Heglund said that Tatur’s success comes from a desire to be the best player that she can be. It was her time off the ice that helped mold her into one of the top players in the state.

“She is someone that has made her into the player that she is and brings it each and every day – just that grit and that determination and just works as hard as she can,” Heglund said. “For her, it is a pretty special recognition that she’s earned.”

Heglund said that Timm’s role grew from the previous year, and she stepped up and became the leader of the defensive core.

“She really was the one that made a whole bunch of tough passes to break the other team’s forecheck so that we can be successful,” Heglund said.

Cassibo took over the starting position from graduate Lucy Morgan, who is now playing at NCAA Division I St. Lawrence University (Canton (N.Y.). Heglund said that Cassibo was outstanding this season, and the goaltending remained consistent all year.

And she never took the credit for herself. Heglund said that when coaches acknowledged her for her play, Cassibo’s response was, “ I would do anything for my teammates, and I just want to make the saves so that my teammates can win.”

“She is somebody who is driven to be great,” Heglund said. “She has worked. She is a student of the game and cares more about her teammates than she does herself. … Oftentimes, we had to tell her, ‘You’re a part of this.’”

Corbin, who is attending NCAA Division I Lindenwood University (St. Charles, Missouri) to play hockey next season, had four goals and 14 assists, including one power-play goal.

Corbin was on varsity for four years and played on a regular shift for three seasons, and she was a defensive-minded forward.

Heglund said that Corbin was put up against all of the state’s leading scorers, and that was a daunting task with a schedule that included at least 17 teams ranked in the top 20.

“She is a kid who sees when our systems break down and when we transition from offense to defense,” Heglund said. “She’s the one that we’re putting out there to make it so that the other team’s top line doesn’t have great scoring opportunities, and she allows us to win because she doesn’t allow the other team to score.”

And while she wasn’t asked to contribute a lot of goals and assists on offense this season, Heglund said that Corbin has the talent to flourish at the college level and will be more on the scoring end to go along with her defensive skill.

Stenslie was the other all-conference player for Maple Grove. She was tied for the lead in points for the Crimson with 26 goals and 18 assists, including four game-winning goals and four power-play goals.

Heglund said that Stenslie was a playmaker and an impact player this season, and she has also been under the radar in the recruiting scene.

“She’s the one who is a game-changer for us,” Heglund said. “She has a knack to score. She scores power-play goals, 5-on-5 goals, short-handed goals. She is a natural goal scorer and has the speed that she can score each and every time that she steps out onto the ice.”

Machlitt had five goals and 11 assists, including two game-winning goals and a power-play goal.

Machlitt was a versatile player who played multiple positions. She played as a wing, a center and as a defenseman at times and was also on one of the two lines that did most of the scoring for the Crimson.

Heglund said that the coaches could trust to put her out there in any situation depending on the game and the need.

“I think one of the biggest things for an athlete that a coach can say about you is that we have confidence and faith and trust in you to play multiple positions,” Heglund said. “And she was willing to do that and sacrifice being able to take every shift at every practice at one position and being great at it in order to be above-average at three different spots.”

Stelljes finished with nine goals and six assists, including a game-winning goal. Heglund said that Stelljes is a powerful skater that allowed Maple Grove to play three lines consistently, which was a big factor that allowed the Crimson to get by some of the other top teams in the state.

Heglund also said that Stelljes was a key penalty killer because of her skating.

“Sam was the anchor of our third forward line and allowed them to play a regular shift, which in turn allowed us to wear other teams down and then really, truly take over in the third period,” Heglund said. “I am excited for her future and what it is going to like for next year. I believe that she’s going to become one of the top scorers for us.”