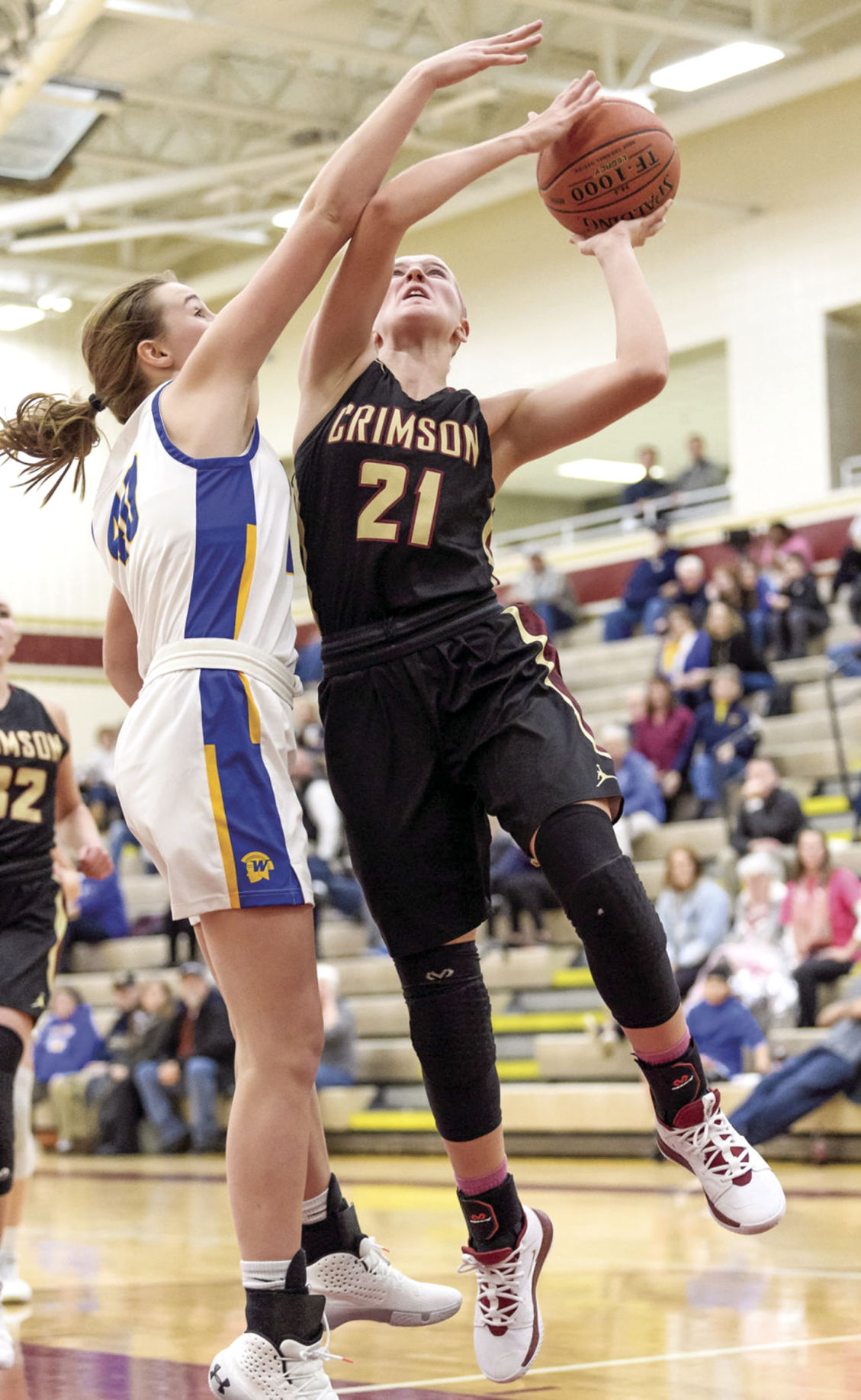 Maple Grove senior guard Abbt Schulte goes up for a layup earlier this season. Schulte, who was named to the All-Northwest Suburban North Conference list, finished in the top five in several season and career program records and is headed to NCAA Division I North Dakota State University next season. 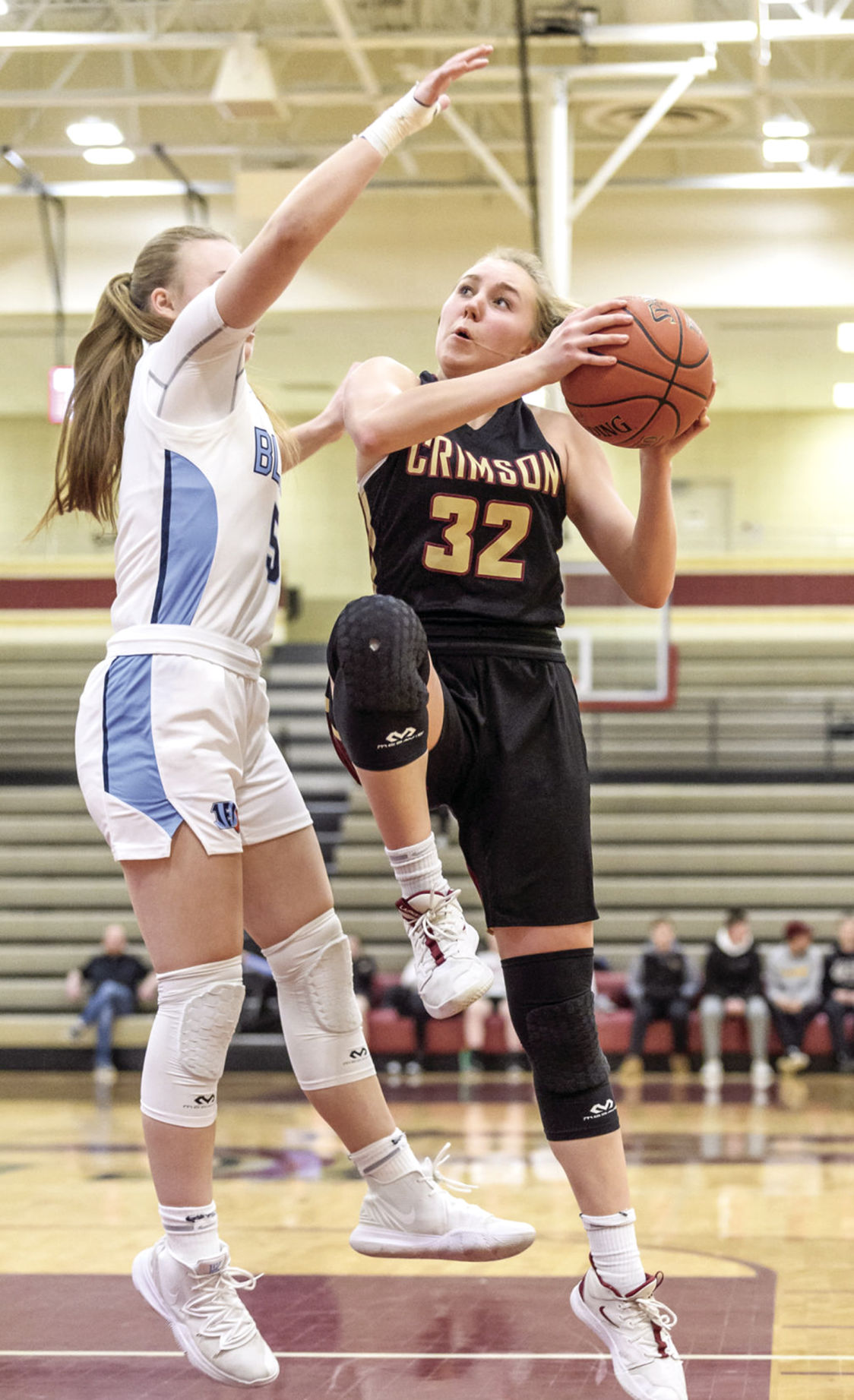 Maple Grove junior forward Jordyn Lamker drives in for a shot this season. Lamker was named to the All-Northwest Suburban Conference list and also moved to second all-time in career scoring in program history. 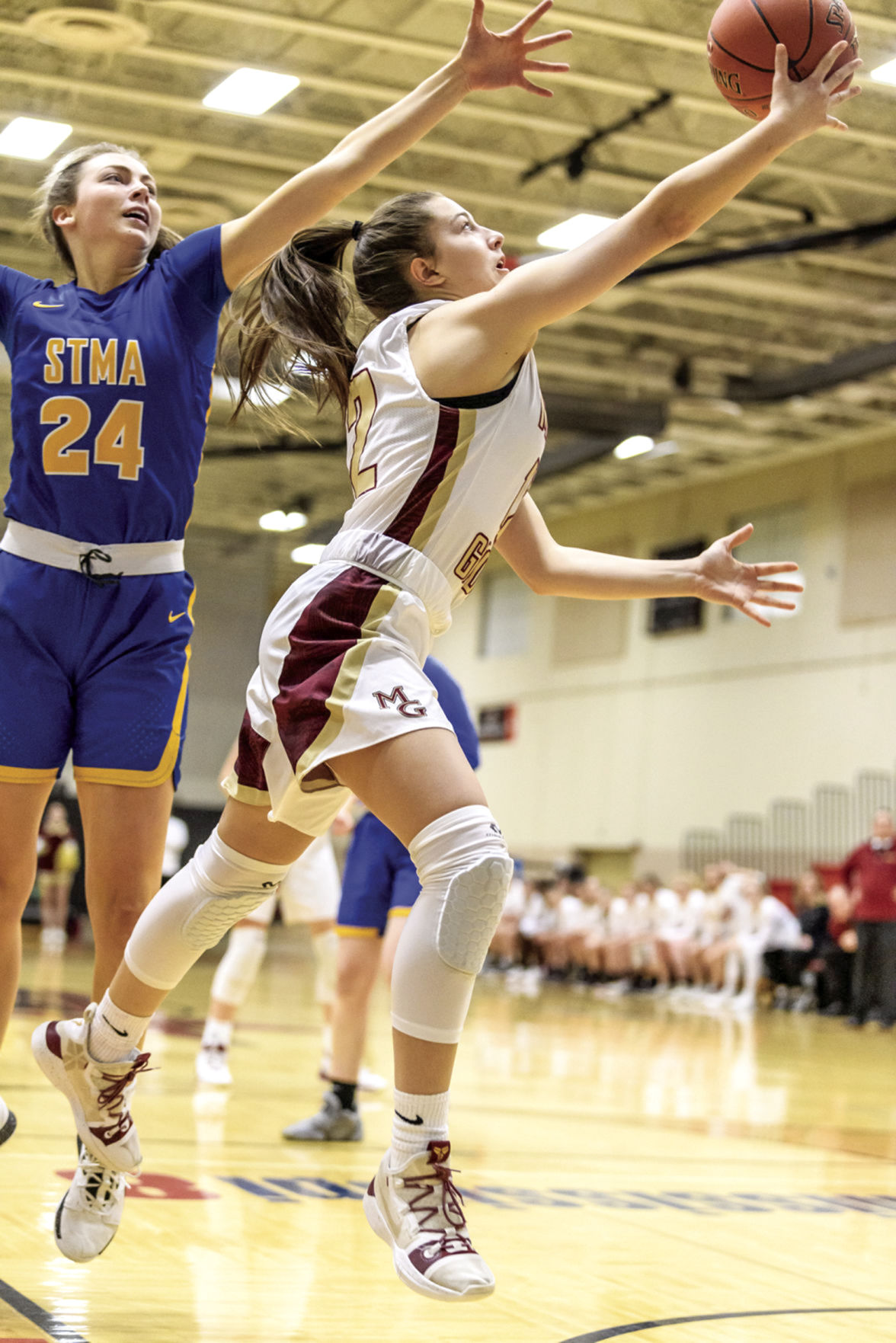 Maple Grove junior guard Kylie Baranick goes up for a layup. Baranick was named to the All-Northwest Suburban North Conference team and finished with 204 points, 113 rebounds and 91 assists in 2019-20.

Maple Grove senior guard Abbt Schulte goes up for a layup earlier this season. Schulte, who was named to the All-Northwest Suburban North Conference list, finished in the top five in several season and career program records and is headed to NCAA Division I North Dakota State University next season.

Maple Grove junior forward Jordyn Lamker drives in for a shot this season. Lamker was named to the All-Northwest Suburban Conference list and also moved to second all-time in career scoring in program history.

Maple Grove junior guard Kylie Baranick goes up for a layup. Baranick was named to the All-Northwest Suburban North Conference team and finished with 204 points, 113 rebounds and 91 assists in 2019-20.

Maple Grove girls basketball dominated the Northwest Suburban North this season to claim the conference title with an 11-1 record.

The Crimson (21-5 overall) ended up being rewarded for its success with three all-conference selections and two honorable mentions, with the lone conference loss coming on a last-second shot against Champlin Park.

Those five players were starters for Maple Grove this season from the first game until the section final and were key in the success of the Crimson, coach Mark Cook said.

“Those five played a lot of minutes this year,” Cook said. “I think the way that those five include their teammates and celebrate their teammates successes at the JV level and for those coming off the bench for the varsity team is also really huge. Those five are great leaders.”

Schulte was the lone senior in the group. She is headed to NCAA Division I North Dakota State University (Fargo) after averaging 16.8 points per game in the regular season.

Schulte finished with 486 points to put her fourth on the all-time list for a season and also set the all-time single scoring record with 40 points against Rogers on Dec. 13. She is second in school history with 322 assists and fifth with 1,118 points, 189 steals and a 73% free-throw percentage in her career.

Schulte added 96 assists, which is fifth all-time for a season. Schulte also has the fourth best finish in assists with 114 in 2017-18. She added 138 rebounds this season.

Defensively, Schulte had 57 steals and 15 blocks.

Cook said that he believes that Schulte will make an immediate impact at the college level with both her skill and leadership qualities, and he was “lucky and fortunate to be able to coach her for the last four years.”

“I think she’s one of the most special players that I have ever coached,” Cook said. “She is just an unbelievable basketball player, but she’s also an unbelievable human being.”

Lamker averaged 15.5 points per game. She is committed to the NCAA Division III University of St. Thomas (St. Paul).

Cook said that Lamker is going to statistically end up being one of the best basketball players in program history and is expected to break the all-time scoring record next season and end up all over the Maple Grove record books.

A key to her success is her versatility, Cook said.

“She can do so many different things,” he said. “She can handle a ball. She can post up. She can shoot inside. She can shoot outside. Just tremendous leadership. A competitive fire like no player I have ever coached. That girl wants to win so bad, and it really pushes her and drives her.”

Baranick was the starting point guard the past two seasons. Schulte was the point guard before Baranick came up to varsity, but Schulte switched positions on the court to help Baranick to excel at her normal position.

“Having those two on the floor together was amazing,” Cook said. “It was super great for us

As a program because it gave us so much flexibility with what we can do and we could mix it up with who got the ball on the floor.”

Baranick collected 204 points and 113 rebounds. She was also a key distributor, being able to find the open players really well, Cook said. Baranick had 91 assists.

Defensively, she finished with 47 steals and 11 blocks.

“Kylie has been a huge barometer for this team for the last couple of years,” Cook said. “When Kylie is on and she’s playing well and she’s confident, our team does really, really well. She’s just a difference maker for us.”

Brant was third on the team with 206 points and also added 101 rebounds and 31 assists. She also had 23 steals and nine blocks.

Cook said Brant was an unbelievable athlete with her speed and agility.

“Izzy had a huge year this year,” Cook said. “Izzy was playing really good basketball by the end of this year. She’s a tremendous shooter and was really feeling it by the end of the year and helped stretch the floor for us.”

Gordon joined varsity as a freshman and became a key player by the end of her first season. After a slow start, Gordon continued to evolve on the floor and once again made an impact by the end of the season.

“She was so disruptive defensively and so athletic,” Cook said. “She finishes well around the basket. She can change a game with her defense and her athleticism.”

Maple Grove, which had made state the previous two seasons, were ranked seventh in Class 4A and earned a No. 2 seed in the section playoffs. The Crimson made the section final against sixth-ranked St. Michael-Albertville but fell just short of a third consecutive state berth.

The junior class this season is not new to experiencing winning, and Cook said he knows they will be hungry to get back to state after just missing out this season.

But the loss of Schulte does leave a gap on the team that will mean others will have to step up and take their games to the next level.

Normally that entails hard work in the offseason, but with the COVID-19 pandemic forcing schools to distance learn and the Minnesota State High School League suspending all spring activities until at least May 4 and possibly for the entire spring season, the training already looks different than years past.

Maple Grove girls basketball players usually work in the weight room in the mornings before school three days a week in the spring. So coaches are now challenging the girls to do the best they can to train at home.

And AAU basketball is also being affected with spring tournaments usually happening by now. If AAU practices and games remain suspended into the summer, that can create even more challenges for not just the Crimson but all basketball players in the state.

Specifically for Maple Grove, there will need to be some training going on regardless to make the strides necessary to continue its success next season. And getting to state won’t be easy with Elk River, St. Michael-Albertville, Moorhead and Buffalo all expected to have solid teams as well.

“If we’re going to try and get back to the state tournament, which is what we all want to do, we’re going to have to get better as a team this offseason and that’s going to take the kids doing the work and us trying to offer them the opportunities the best we can as a coaching staff,” Cook said.

The Maple Grove girls’ basketball team fell short of its bid to make three straight state tournament when it lost to St. Michael-Albertville 7…