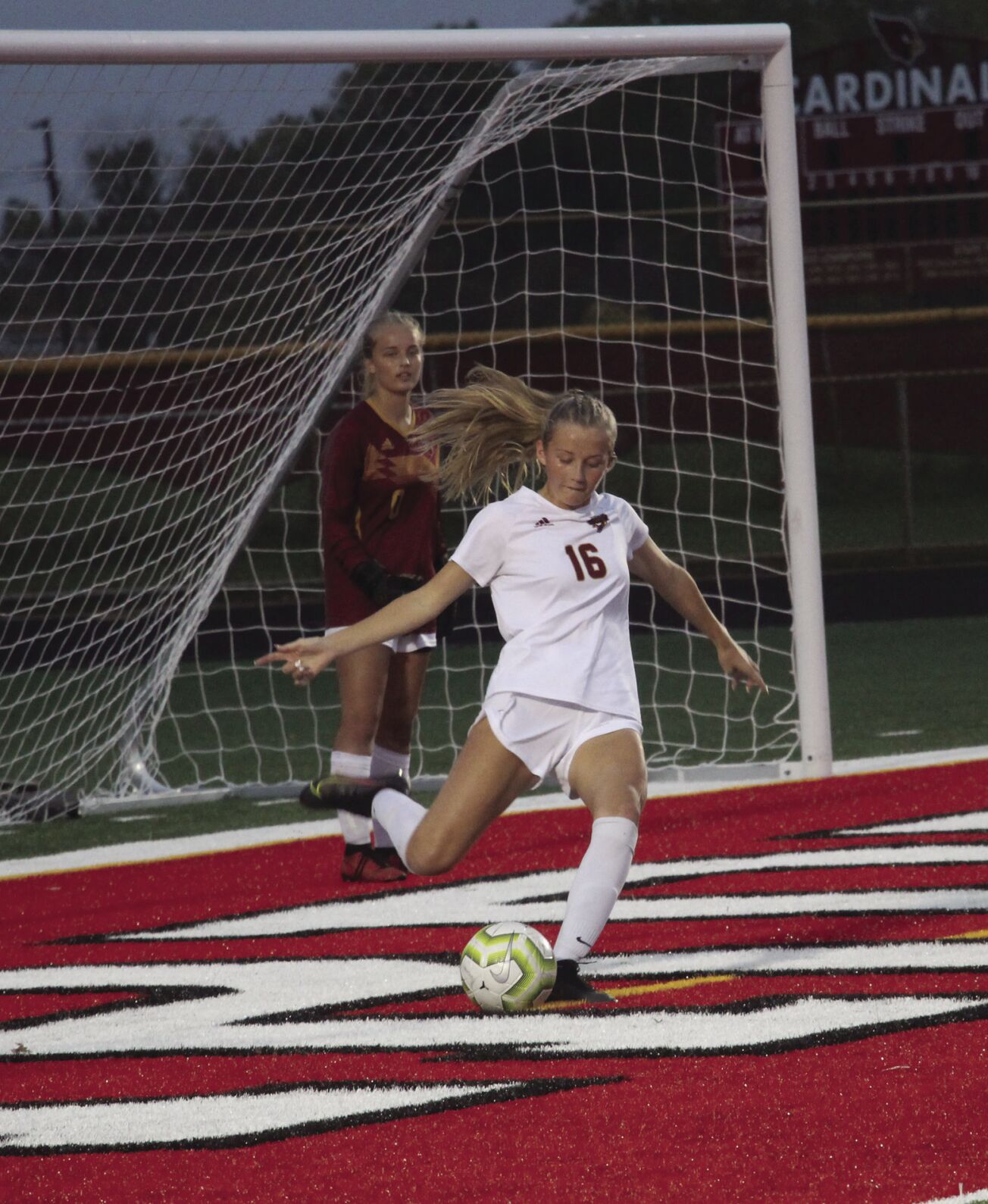 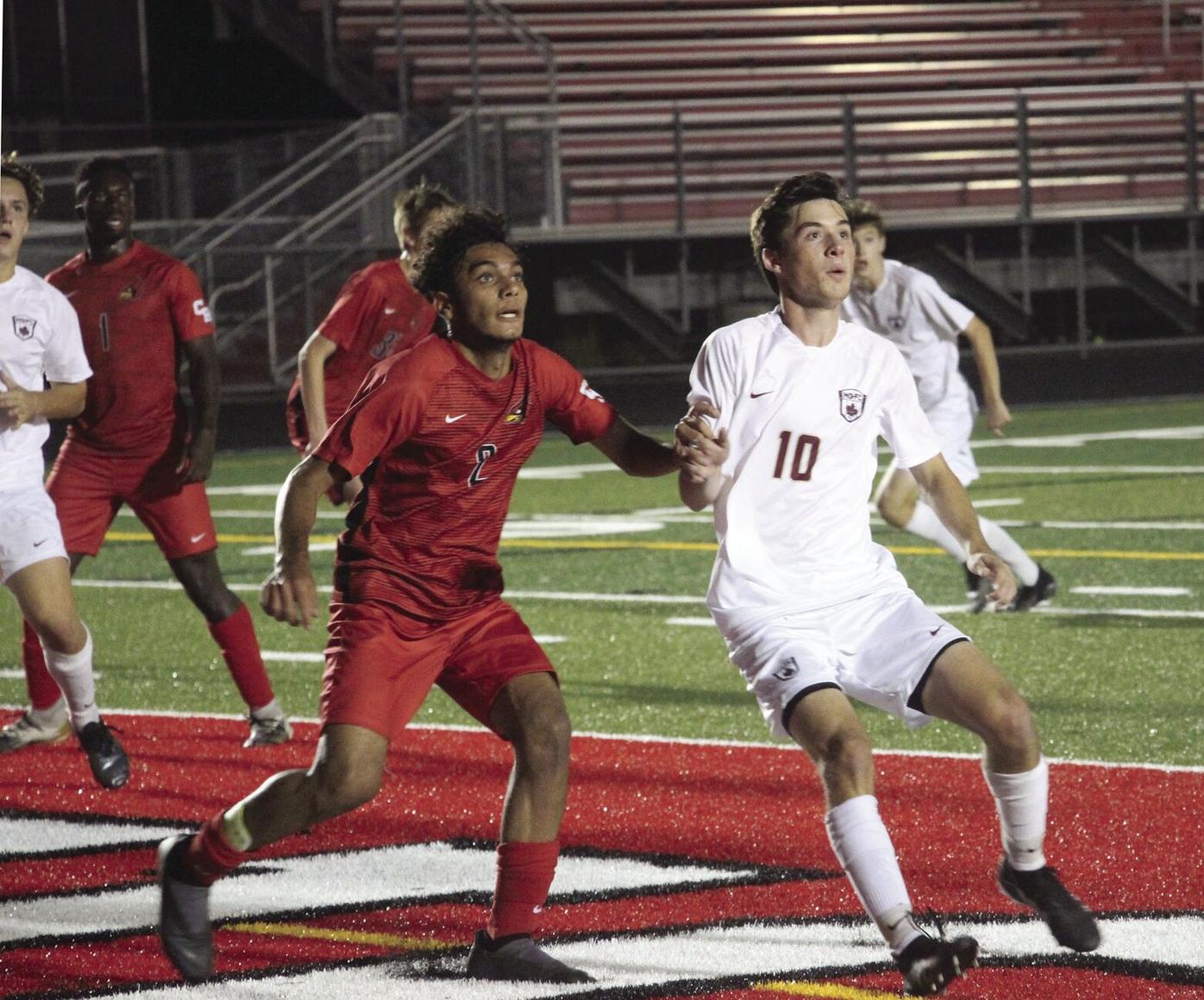 Another game, another win, and another hat trick for Maple Grove junior Chris Frantz. That is how the final regular-season week started for the Crimson as they beat Andover (5-8-0) on Senior Night at Crimson Stadium 5-0 Oct. 5.

On an unprecedented scoring tear, Frantz led the way with three more goals (his sixth straight game with a hat-trick), along with goals from junior Aaron Badillo and sophomore Isaac Swenson. Junior goalkeeper Holden Waldrum and senior goalkeeper Tyler Wernz, aided by stellar defense, combined for a shutout.

With an unblemished record of 13-0-0, the Crimson stared down one more regular-season hurdle on Oct. 7 with a matchup on the road against Coon Rapids (7-6-0). While the Cardinals played with a very defensive mindset, not pushing the ball down the field much, and stacking the box around their goal, the Crimson eventually broke through and, like they have all season, poured on the goals, winning 5-1 and finished the regular season 14-0-0.

Junior Carter Sheard set up Frantz for the opening goal in the first half on a crossing pass in the middle of the field. Then, three minutes into the second half, Sheard nailed a header to get a goal of his own, making it 2-0. “Coon Rapids was a pretty good test for us going into the playoffs,” co-head coach Justin Turner said. Credit to our guys for listening to our halftime adjustments and making the plays.”

Two minutes later, senior Jordan Ross got on the scoreboard and extended the lead to 3-0, and then Frantz, like the previous six games, got two more goals and sealed a 5-1 win, while notching his seventh-consecutive hat trick and eighth on the season, good for a single-season school record of 32 goals, passing Chad Morse, who scored 28 in 1998.

Frantz finished one goal behind Park Center’s Sidike Jabateh (33 goals) for most in Class 2A. Sheard finished eighth in Class 2A with 14 goals scored. “I’m definitely happy with the record but any one of us could have done that this season,” Frantz said. “It just happened to be me this year.”

But as great as Frantz has been this year, Maple Grove is more than just one dominant goal scorer. As a team, the 2021 Crimson blew their previous scoring record out of the water, notching 76 goals in 14 games, 21 more than in 2014, when they scored 55 in 16 games. They also lapped the Class 2A field in total goals scored, with second-place Park Center at 61.

Along with the goals come the source of the scores: assists. Ross finished third in Class 2A with 15 assists, Frantz finished fourth with 12, senior Damon Humphrey sixth with 11, and Badillo tied for ninth with eight. “I didn’t expect this production [of goal scoring],” Frantz said.

Since the team lost their forward three attackers from last year, they had to run out a new group of forwards, including Frantz, who used to be a center midfielder. “The coaching staff emphasizes not being selfish and playing together. Our whole attack has been really good. I couldn’t expect that,” he said.

All year long, Maple Grove has kept the pedal to the medal, keeping their focus on the next game. And while that will continue in the section playoffs to a greater degree, an unblemished regular season does give them cause to pause and reflect. “We want to recognize the unbeaten season because it’s super cool and really hard to do,” Turner said after beating Coon Rapids. “We’ll definitely celebrate tonight. But then it’s back to work tomorrow.”

Now that their record stands perfect after 14 games, their sole focus is to keep it that way. Because now, in the section playoffs, one game, one moment can change the course of their season. “We’re the team to beat and that means other teams are going to try and knock us off our game,” Frantz said.

“You can prepare all you want, but nothing replicates a playoff game,” Turner said. “A lot of guys have a lot of experience and have been in those section fights. We’ll take it one game at a time. Yeah it’s Sections, they’re obviously big games, but it’s just another game we have got to be ready for. If we show up and we do what we’re supposed to do and stick to our game plan I think we have a pretty good chance. But it’s sports. Anything can happen.”

Coming into Senior Night at Crimson Stadium on Oct. 5, the Maple Grove girls soccer team looked to end the regular season with positive momentum heading into the postseason, where they look to defend their four consecutive section titles, and the 2019 state championship. But visiting Andover (8-6-0) had other plans.

The Huskies came in winners of three straight games and were playing their best soccer of the season. Against top-five Maple Grove, their impressive roll continued with a shocking 2-1 upset of the Crimson. Senior Quinn Omar provided the only goal for Maple Grove. Andover’s Jorgenson sisters sparked the Huskies, with goals from sophomore Skylyn and junior Cedar.

“We knew we would end the season with tough games,” Maple Grove head coach Ben LeVahn said. “It gave us a good chance to see where we’re at and give us a chance to fix some things. If the losses help us fix our problems then that’s a good thing.”

In the regular-season finale on Oct. 7, the Crimson got back on their winning ways with a 2-0 shutout over Coon Rapids (5-8-1). Senior Brit Lund got the scoring started with an early second-half goal, and then assisted on the second score from freshman Junnah Kang. Senior goalkeeper Ingrid Kautzman made two saves and the defense put the clamps on the Cardinals resulting in a barren scoring performance.

The Crimson (11-2-2) now enter the section tournament for the first time in Section 5AAA, where they are the number one seed and host Irondale on Tuesday at Crimson Stadium. Prepping for the section playoff run is nothing new for this Maple Grove program.

As four-time defending section champs, the Crimson know what it takes to be successful in the single-elimination tournament. “Everything is prepping to the postseason,” LeVahn said. “We are definitely going to be relying on the upperclassmen and pushing them into leadership roles because they know what it’s like to win a state title.”

LeVahn is hoping when their season ends, the 2021 iteration of his team can look back and be proud of what they accomplished. “It is a good group of kids and we’d like to see them earn something to be proud of,” he said. “Our goal is the state championship, not just sections.”