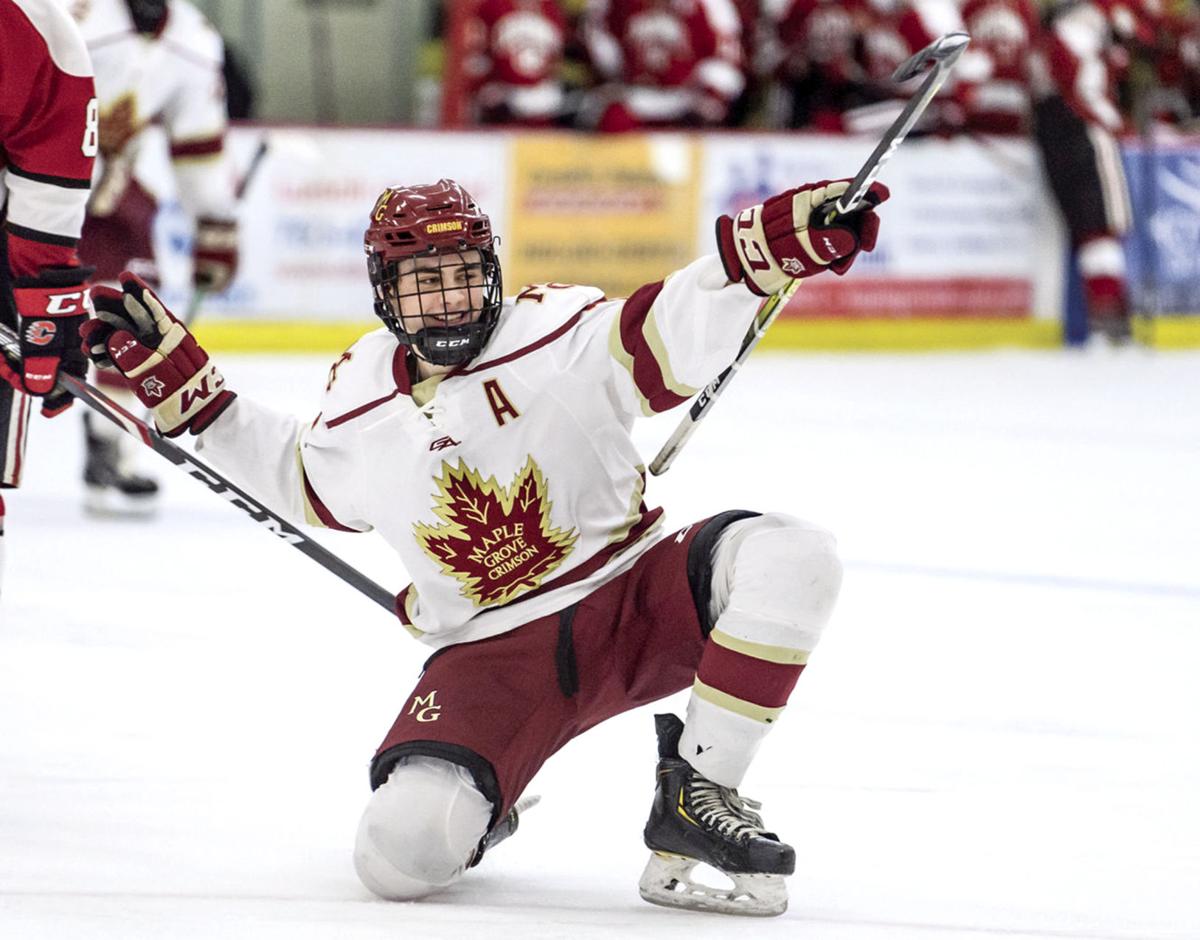 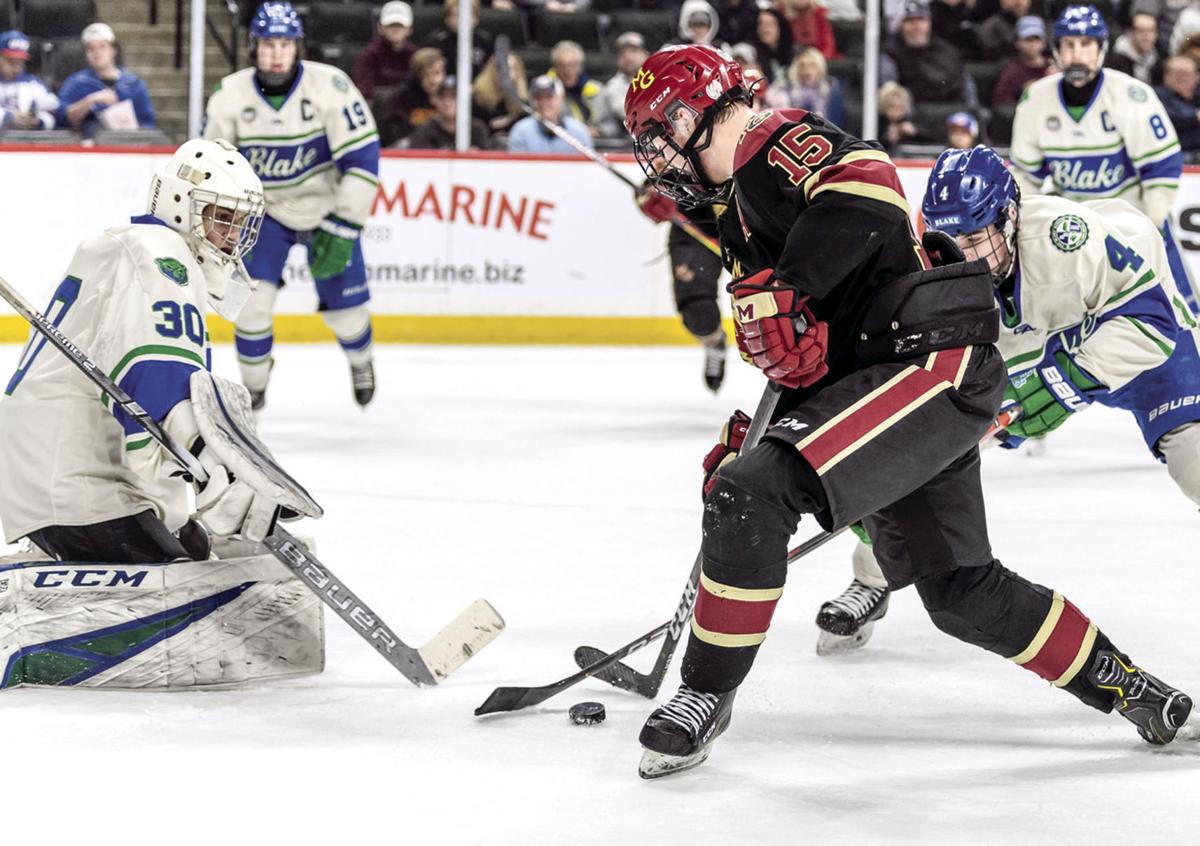 Maple Grove senior forward Tyler Oakland skates in for a shot in the Class 2A state tournament. Oakland was one of five Crimson to be named All-Northwest Suburban Conference. 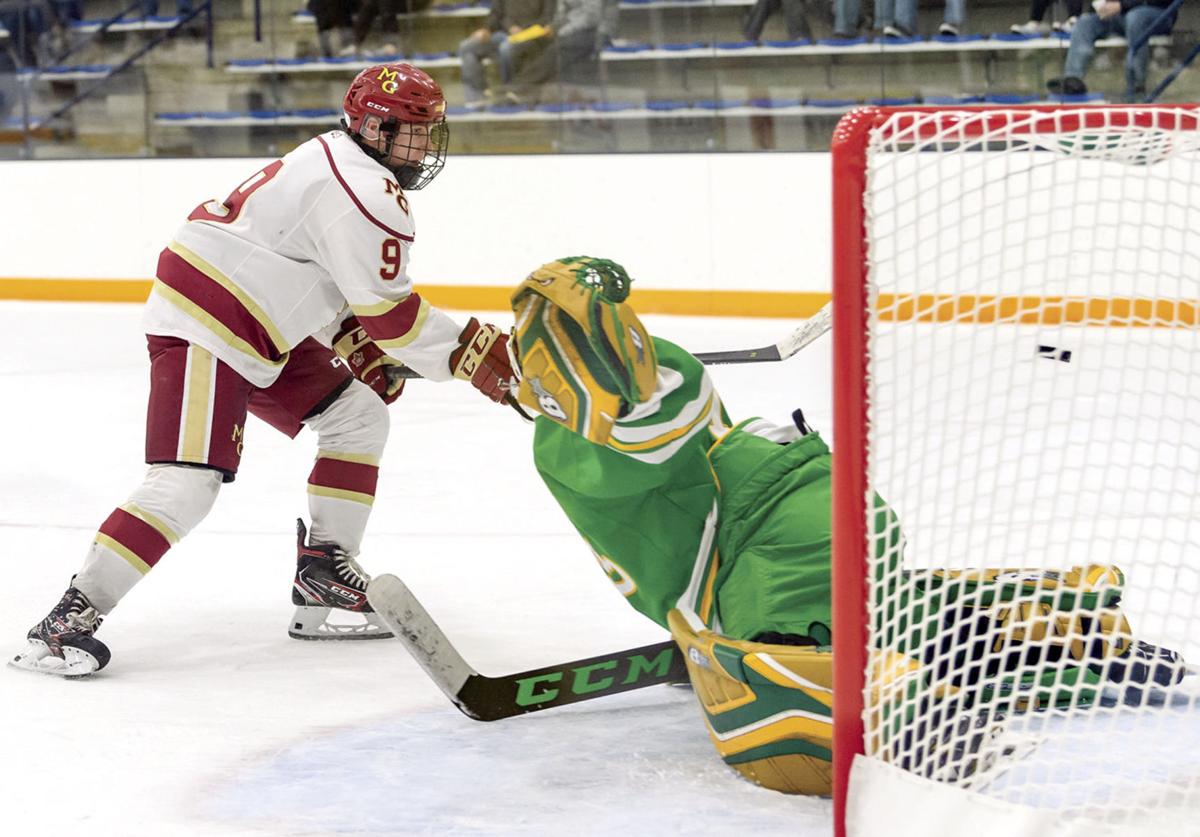 Maple Grove senior forward Tyler Oakland skates in for a shot in the Class 2A state tournament. Oakland was one of five Crimson to be named All-Northwest Suburban Conference.

Out of the eight individual awards, only one was for a senior.

“The group of juniors is an extremely talented group and deep group, and any time you can get a group with that amount of depth is certainly helpful,” coach Todd Berglund said. “I think with Kukkonen going down nine games into it, I still think a lot of kids raised the bar and worked harder and even achieved more than what we expected from them.

“I am proud of what they accomplished because I think a lot of people doubted them a little bit as to what they could do, and I know as a coaching staff, we never really had any doubts.”

The Crimson finished the season 21-10 overall, taking third in the conference with 20 points (10-2). They advanced to state after a two-year hiatus for the program and finished consolation runner-ups.

The seniors were a big part of the success, including Oakland, but the large core that is expected to be back does mean that more success could be on the horizon for next season.

Nothing is guaranteed with the difficult section and state competition, but the confidence is certainly there, Berglund said.

Berglund talked with his team about next year’s mission following the Class 2A consolation final loss to Andover.

“Everyone was very committed to coming back and being a part of it,” he said. “I hope that that is what’s going to happen, and I am pretty confident it is because this is a pretty tight group of kids.”

Defensive scoring and power-play success were keys this season, and the all-conference accolades reflect that.

Elias had six goals and 12 assists, including four goals and five assists on the power play.

“We were in a really good situation defensively having a year of varsity hockey under all of their belts and that just breeds more confidence as they move forward,” Berglund said.

And all eight players on the list made contributions on the power play.

Berglund said that after seeing low percentages on the power play the past season despite having a lot of talent, the coaching staff made it an emphasis this year.

The shots were coming but weren’t going in, so this season, the most time since Berglund started coaching at Maple Grove was used to correct that.

“I think obviously it showed in our percentage, and if we aren’t successful on that, then we aren’t getting as deep as we did,” Berglund said. “We had some really talented puck movers on that power play and kids that can shoot the puck well in (Thomas and Nelson) and (Elias) who is just an incredible puck mover.”

Berglund added that Jacobs was tenacious on the power play, as well, and Oakland also helped move the puck well.

Jacobs had 15 goals and 18 assists, including six goals and three assists on the power play. He had three game-winning goals.

Oakland closed his high school career with 15 goals and 13 assists, including three goals and six assists on the power play. He had three game-winning goals.

Berglund said that Oakland was a junior varsity player as a sophomore, and every time he watched him play, he would say, ‘This kid’s got skill’ and ‘This kid’s really coming along.’

Berglund told Oakland he still doesn’t think he hit his peak, and at state, Oakland even had some interest from junior teams.

“It is just a great success story because the kid has worked so hard to get to where he’s at – working in the weight room and pushing himself,” Berglund said. “He’s done everything he can to get to the highest level that he could.”

Kukkonen collected six goals and 12 assists, including a goal and six assists on the power play. He also had three game-winning goals. And that was in just eight games.

But he coaches saw what he was capable of, as Kukkonen led the Crimson in scoring through the first eight games.

“You don’t get that full depth of seeing him play games nine through 31, but one through eight, he was a difference-maker,” Berglund said. “The teams that we did play certainly felt he was deserving of that honorable mention.”