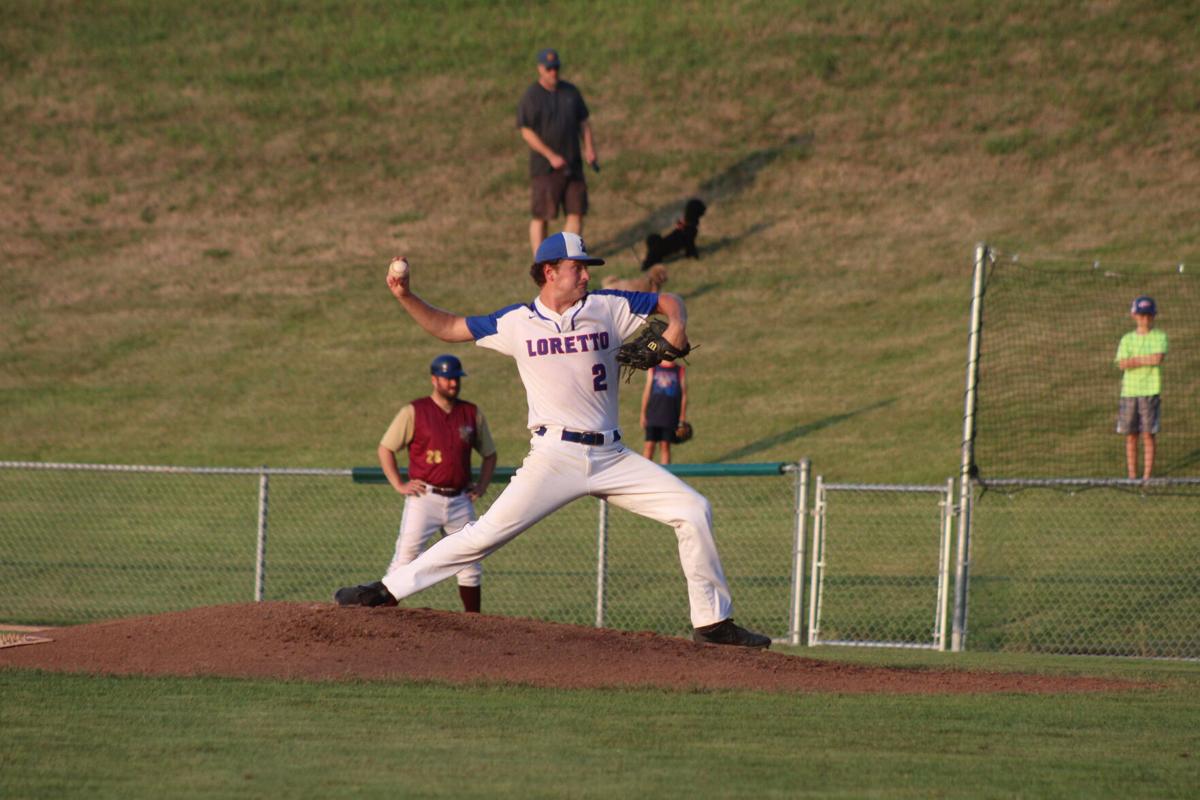 Loretto Larks pitcher William Reschenberg fires home during a game against the Montrose-Waverly Stingers on July 17. 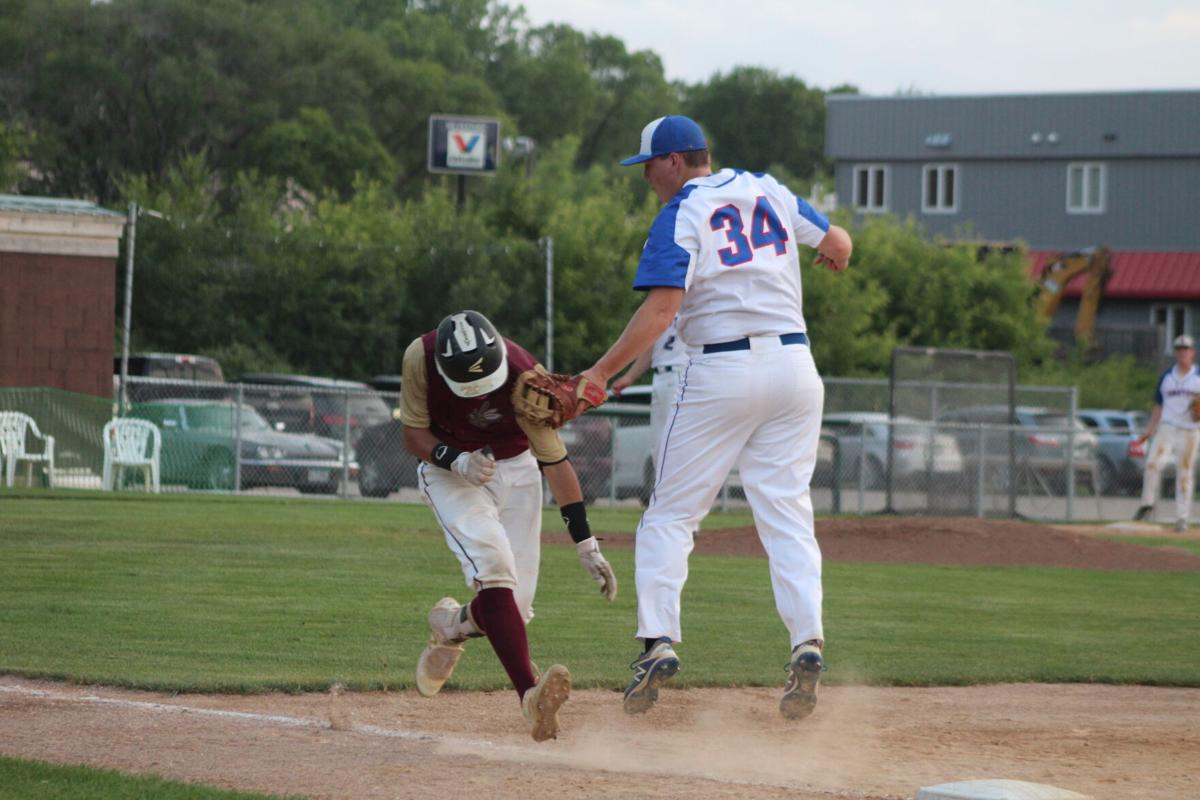 The throw pulled Loretto first baseman off the bag, but he still had the wherewithal to tag the Montrose-Waverly baserunner for a nonstandard but still effective tag out. 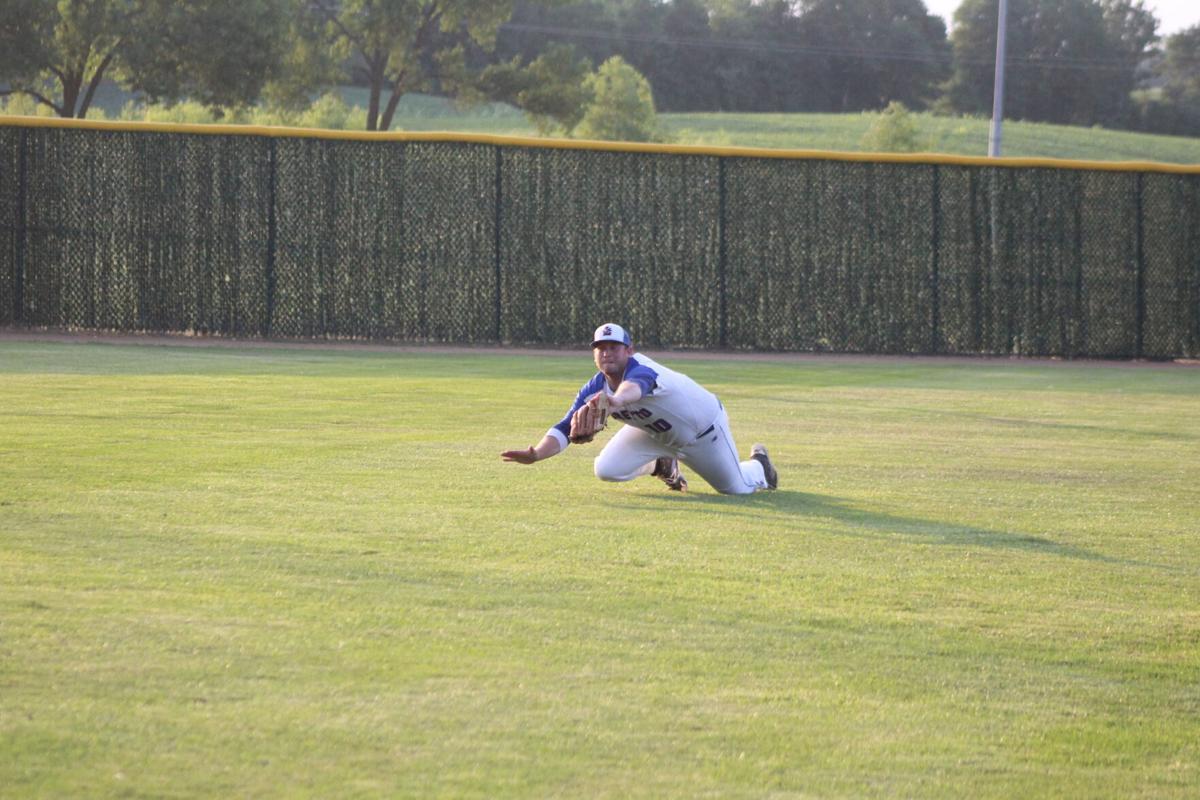 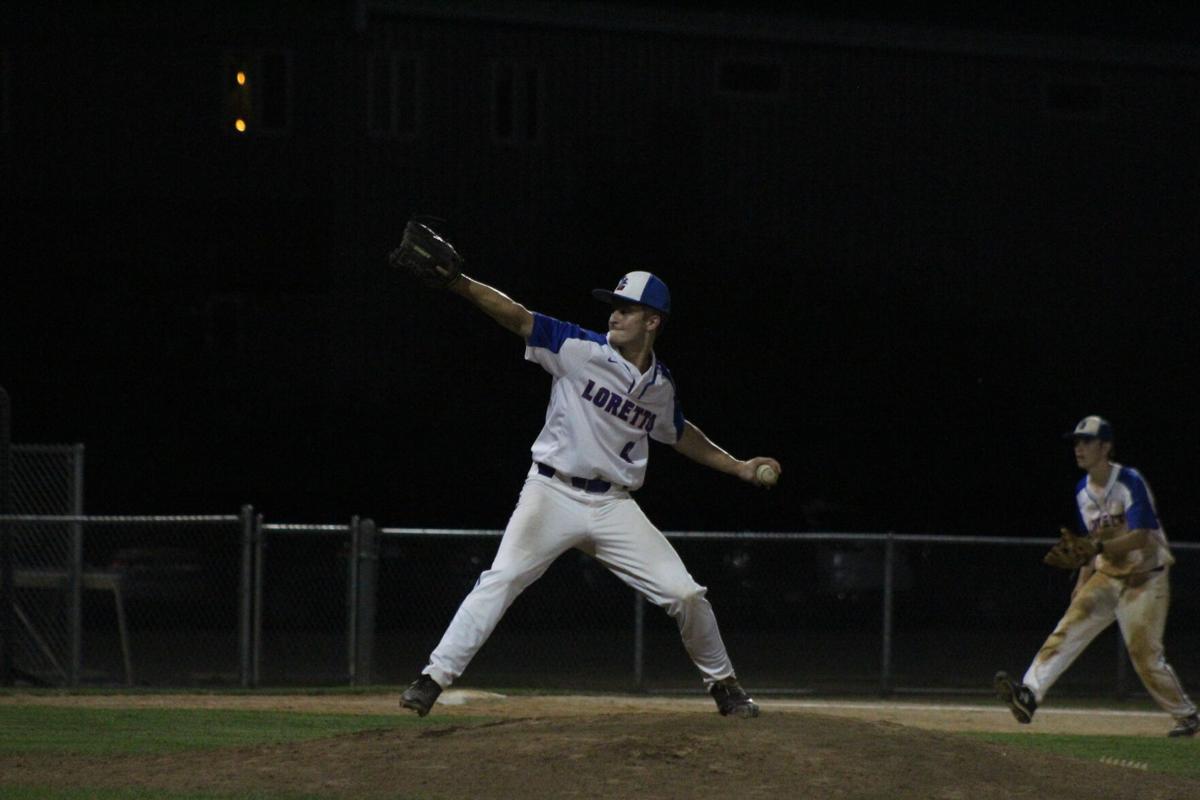 Left-handed pitcher Bradley Koskie got the Larks out of a big jam in the bottom of the seventh.

Loretto Larks pitcher William Reschenberg fires home during a game against the Montrose-Waverly Stingers on July 17.

The throw pulled Loretto first baseman off the bag, but he still had the wherewithal to tag the Montrose-Waverly baserunner for a nonstandard but still effective tag out.

Left-handed pitcher Bradley Koskie got the Larks out of a big jam in the bottom of the seventh.

The Loretto Larks amateur baseball team has fallen one win shy of the Class C state tournament three years in a row. Although the 2020 regular season has been abbreviated by the COVID-19 pandemic, the Larks hope that they will be able to add on to the length of their season at the end of it by advancing to state for the first time since 2016.

“Hopefully, we can get over the hump this year,” said Kent Koch, who represents Loretto both in town ball and as mayor of the city of 650 residents. Koch was first elected mayor in 2010 when he was still playing with the St. Cloud State squad, making him likely the first and only scholar-athlete-mayor in United States history.

Like the rest of Minnesota’s town ball teams, the Larks had to wait for the 2020 season to begin. Teams usually start playing games in April or May, but the ongoing COVID-19 pandemic and the state’s associated safety orders meant that competition could not begin right away.

High school and American Legion baseball never got off the ground in Minnesota this year, but the Larks felt that a resumption of town ball competition would be allowed at some point, so they scheduled extra practices and an intrasquad scrimmage in the meantime.

“We added [the scrimmage] to start seeing some live pitching and just did the best we could to be ready,” Koch said.

The state government adjusted its guidelines in June to allow for town ball to be played, and the Larks tested themselves right away by opening their season on June 24 against the Minneapolis Cobras, defending state champions in Class A.

The Larks fell 5-0 in that game, but had worked their way to an even 5-5 record entering this week.

The Larks celebrated a pair of victories last weekend, beating the Montrose-Waverly Stingers 11-5 on Friday, July 17, and the Maple Plain Diamond Devils 3-2 on Sunday, July 19. Both games were played on the Larks’ home field, Arnold Klaers Park, though the Larks played the part of the away team against the Stingers. The shortened season has caused a few oddities like that around the state, with teams trying to cram games into fewer weeks, and field availability or lack of lights sometimes causing difficulties.

All the better for fans to see the Larks play at Klaers, even as the away team – the park is one of the most striking in the local area, with hillside seating and a view of farmland over the fence that creates a “Field of Dreams” atmosphere.

The visiting “home” team from Montrose made a mistake of fundamentals in the top of the eighth inning of Friday’s game that would cost them dearly. The Larks and Stingers had battled back and forth all evening, with the Larks leading 5-4 entering the inning. The Stingers got two quick outs and later caught Koch between first and second for what should have been an inning-ending rundown. The Stinger catcher was too slow in covering first to participate in the back-and-forth throwing sequence, however, and Koch was able to slide into the unguarded base to extend the inning. Tyler Maher got on base next, and then Keenan Hodgkin smashed a triple that plated two runs. Nathan Maher and Nicholas Kaye followed with back-to-back RBI hits. Ben Leuthner earned a walk and then Todd Traen and Bradley Koskie each knocked in a run to complete a six-run frame, all the damage coming after what should have been the third out.

The game-changing mistake was made all the more painful since the Stingers got a fifth run before being retired to end the game, which could have been the tying run.

Also key to the Larks’ victory was a relief pitching performance by Koskie in the bottom of the seventh, just before the Larks broke the game open. Koskie entered with Stingers on second and third and only one out, but managed to strike out two batters looking without allowing any of the runners to make their way home.

The much tighter win over Maple Plain saw the Larks come from behind with two runs in the bottom of the eight. Tyler Maher knocked in the tying run with a double and Nathan Maher singled him home to take the lead.

At some town ball teams, one will see an empty dugout when a team is in the field, indicating a lack of squad depth. That’s no problem for the Larks, who have plenty of names on the roster to rely on.

Some, like Koch, are from Loretto, while others come from the surrounding area. Teams may field players who have established residency within a 30-mile radius of their home field; Larks on the 2020 squad list Plymouth, Corcoran, Maple Grove, Medina, Delano, Rockford, Rogers and Hamel as their hometowns.

Koch named Tyler Maher as one of the top hitters on the team and in the Larks’ North Star League, and said Colton Petron is a pitcher to watch out for. Kaye, Leuthner and Charles Engdahl are among the newcomers who could be impact players.

“The biggest thing with the shortened season is keeping everyone healthy both with Covid and other injuries,” Koch said. “Pitch counts will be used to make sure we are full strength when we get to playoffs. We have a lot of depth this year; that should help in case we do encounter some injuries.”

The Larks were scheduled to visit Delano for a game Wednesday, July 22, after the press deadline for this edition. They will wrap regular season play with a trip to Cokato on Friday at 7:30 p.m. and a home tilt with Howard Lake on Sunday at 2 p.m.

The Region 12C playoffs will commence of Aug. 5 and run through Aug. 16. If the Larks can get to state, the tournament will be played in New Ulm and Springfield Aug. 21 through Sept. 7.