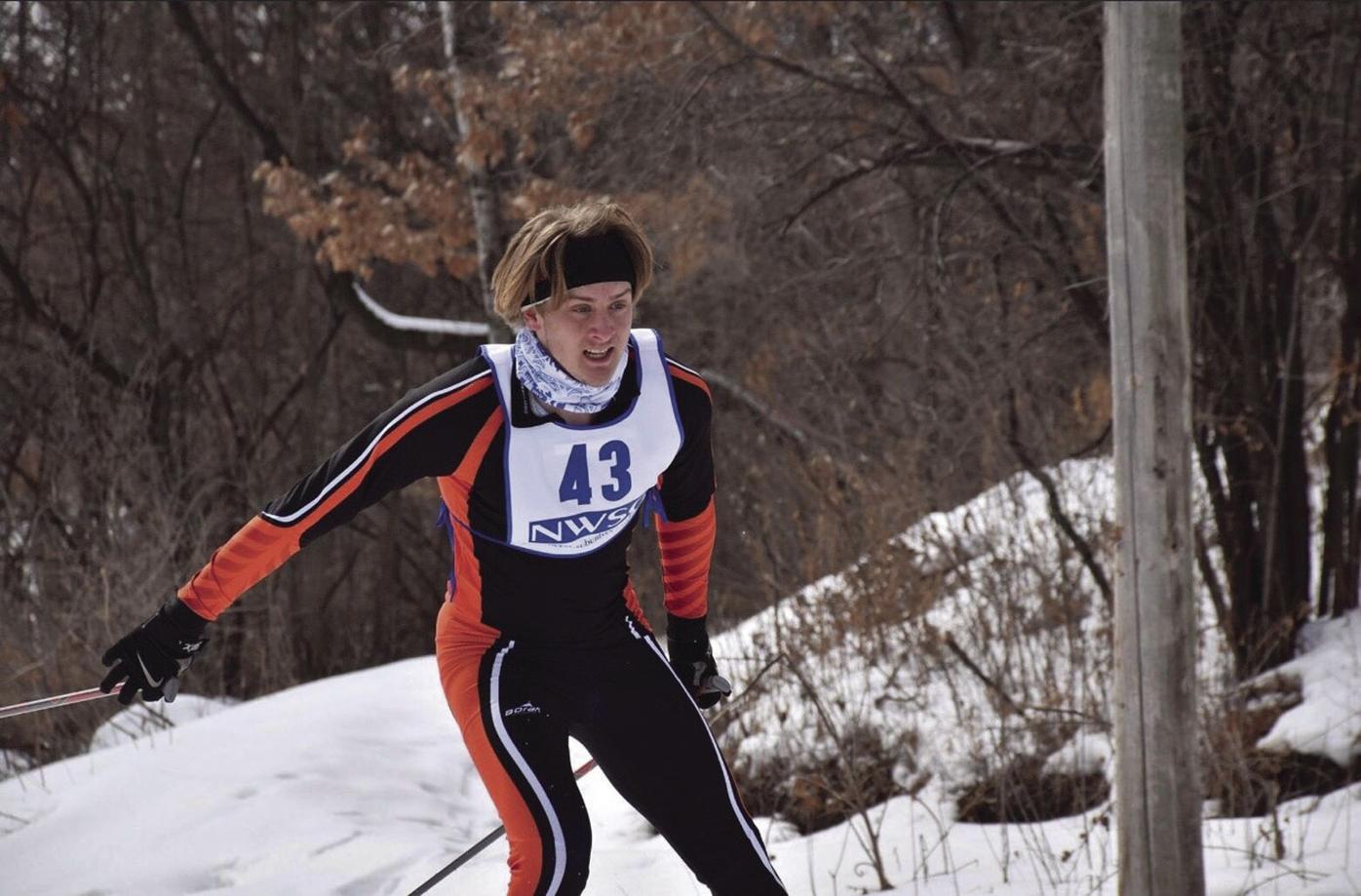 Vaughn Ruska competes during a Nordic Ski meet last season for Osseo Senior High School. He was a state qualifier this year, which he calls the proudest athletic accomplishment of his career. (Photo courtesy of Eric Ruska) 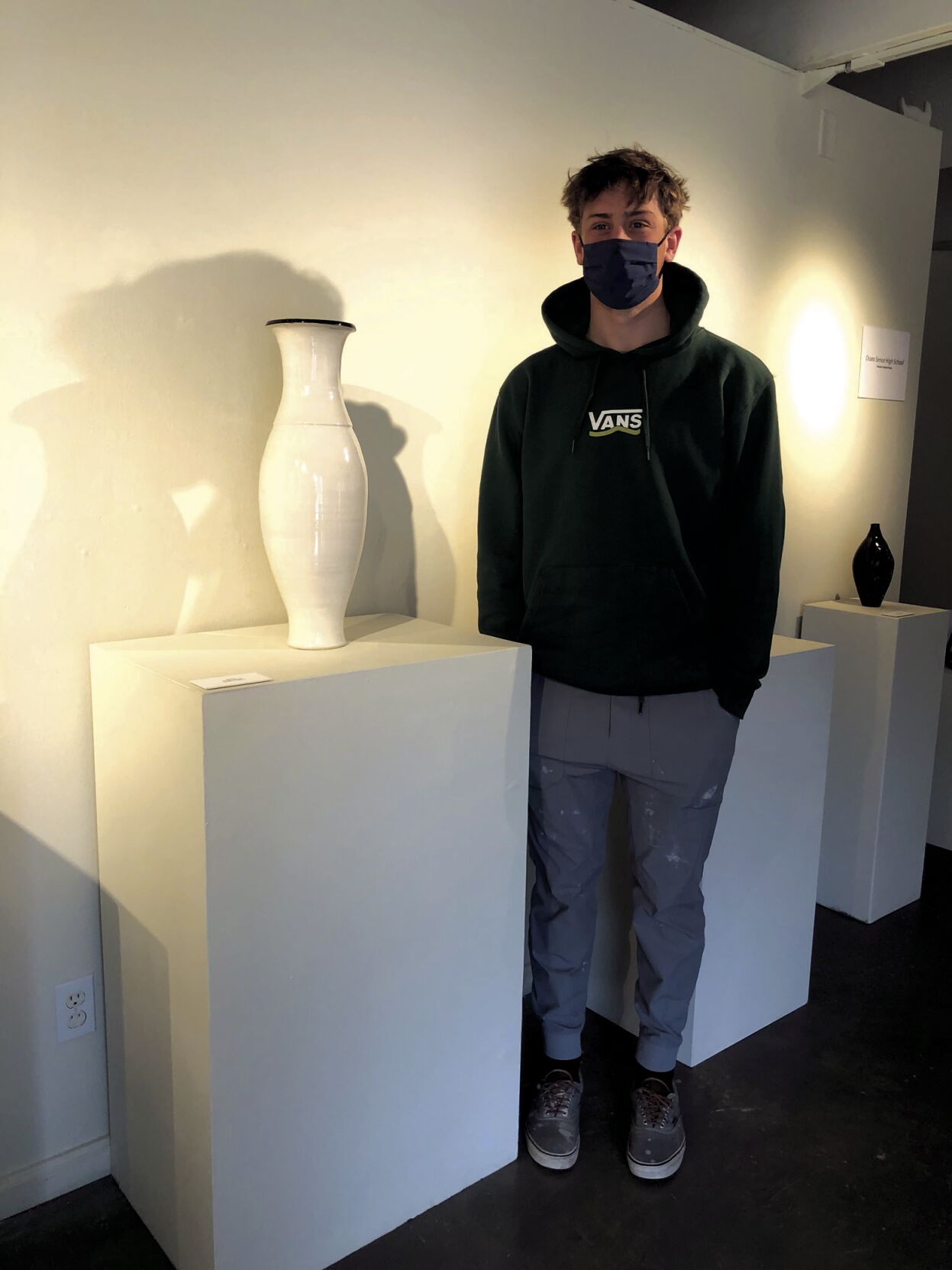 Osseo Senior High’s Vaughn Ruska stands next to his sculpture ‘Obelisk,’ which was selected to be part of the 24th Annual National K-12 Ceramic Exhibition. Another piece of his, ‘Bound Autumn,’ was chosen as well. (Photo courtesy of Eric Ruska)

Vaughn Ruska competes during a Nordic Ski meet last season for Osseo Senior High School. He was a state qualifier this year, which he calls the proudest athletic accomplishment of his career. (Photo courtesy of Eric Ruska)

Osseo Senior High’s Vaughn Ruska stands next to his sculpture ‘Obelisk,’ which was selected to be part of the 24th Annual National K-12 Ceramic Exhibition. Another piece of his, ‘Bound Autumn,’ was chosen as well. (Photo courtesy of Eric Ruska)

Vaughn Ruska loves the process. For the three-sport senior athlete at Osseo Senior High, it is oftentimes more enjoyable than the achievement.

As a participant in cross country, nordic skiing, and track and field, Ruska is in the unique position of competing in individual sports where he has direct control of his outcome.

That may be why only two years ago, Ruska picked up a new passion that is also individual by nature, which became what he calls an addiction: pottery.

During the third trimester of his sophomore year, Ruska took his first pottery course intending it to be simply an easy ‘A’ on his report card. It turned out to be something greater. The more he learned the basics of ceramics, the more he became enamored with the art. Sitting down at the pottery wheel and having total control and abstract freedom over whatever is made was something Ruska fell in love with.

“It is your choice to make whatever you want,” Ruska said. “I love the pride of saying, ‘I did it by myself.’”

Dan Prody teaches ceramics at Osseo High School and remembers meeting Ruska in an intro to ceramics course two years ago. Just one year prior, Ruska had tried out for the high school hockey team but was eventually cut. Prody, who also serves as a hockey coach with Osseo, doesn’t recall the specific reason he was cut, only that Ruska didn’t let it stop him. With encouragement from his parents, Ruska began taking up nordic skiing, since the skates and skis were very similar for him.

It was at that point that he also began his career in pottery. Essentially, Ruska had reinvented himself. “The kid doesn’t stay down,” Prody said.

A LOVE OF POTTERY

Over time, Prody and Ruska began growing a close bond, which only grew deeper in the past year due to the pandemic. Last spring, Ruska took his mom’s minivan and drove it to the high school to pick up a pottery wheel to use in his garage at home, which had morphed into a makeshift studio. Even in the dead of winter, Ruska would spend his sculpting hours tucked away in his garage with the comforts of a space heater. Then once a month, he took his artwork and dropped it off at the school for it to be fired, which is the process of bringing the clay and glazes up to a high temperature.

In Prody’s 11 years of teaching pottery at Osseo, Ruska stands a cut above everyone else he has seen. “He is the most naturally gifted potter I’ve worked with,” Prody said. “I don’t think he knows how good he really is.” Ruska’s skills in spatial recognition and clay molding stood out immediately to Prody and were only the tips of the iceberg of his relatively newfound repertoire.

“This kid is the hardest worker I’ve met in my life,” Prody said.

However, Ruska admitted his first sculpture was not A-plus, but with every object came more confidence. During his junior year, Ruska spent nearly two to three hours after each school day working in the pottery studio, perfecting his craft. By senior year, he devoted the same amount of hours he did to athletics and pottery. And just last month, Ruska was selected to participate in the 24th Annual National K-12 Ceramic Exhibition for his two pieces ‘Bound Autumn’ and ‘Obelisk.’

When he found out he was to be honored at a national exhibition, Ruska was stunned. “I never thought my pieces were at that level,” he said. “I was shocked that it happened.”

It even surprised those closest to Ruska. Eric Ruska wears many hats at Osseo High School. Along with being a science teacher, he is the head coach for girls tennis and softball. Oh, and all the while being Vaughn’s father. During Vaughn’s adolescent years, Eric noticed him being captivated with math and sports, which is why Eric and Alecia, Vaughn’s mother, were a little surprised when Vaughn dove head-first into the pottery world. “He has always surprised us with something,” Eric Ruska said. “I think he surprised himself with ceramics too.”

For Ruska, seeing his work from the standpoint of the maker elicits tough criticism. When others see perfection, he sees the flaws. The one sculpture in his portfolio that he critiques the least, however, is ‘Bound Autumn.’ “It is a complete piece,” Ruska said about the artwork he spent 12 hours at the pottery wheel with. “The form is beautiful and traditional, while the design brings in the entire piece and makes it whole.”

Just like his running and skiing, time at the wheel requires patience and trust. If you ask Ruska, however, he wouldn’t call himself a patient person (if patience means sitting outside for hours watching birds). But skills that serve him well in exercising for long periods of time crossover to the pottery studio. You can’t skip a step in the process otherwise the artwork won’t be complete. “Pottery is a huge mental battle,” Ruska said.

In a way, pottery serves as an outlet from the high-intensity athletic training Ruska puts in for his three sports. Different requirements of skills, but the same opportunity for a challenge. “Pottery is a completely different challenge,” he said. “I don’t have to think about being super competitive. It has allowed me to challenge myself in different ways.”

On the surface, there may not seem like many similarities between ceramics and athletics. But Osseo Cross Country and Track and Field head coach John Rundquist has seen firsthand through Ruska how skills in one arena translate to the other.

“Vaughn doesn’t take shortcuts,” Rundquist said. “He understands there are steps along the way.”

For the past six years, Rundquist has had a front-row seat to Ruska’s athletic career, coaching him in 12 different seasons. Over that time, Rundquist has seen the senior’s character shine through trials and triumphs.

One day last summer, Rundquist was painting his house when he got a text from Ruska that forced him to drop his paintbrush. He opened his phone and saw a photo of an x-ray, which showed a broken tibia. Recently, Ruska had been playing capture the flag with some friends when he tried to jump over the top of someone but ended up snapping his leg. The result: Ruska would be forced to miss his senior year of cross country.

Immediately, Rundquist felt numb and sick to his stomach. Just two years prior, Ruska suffered a stress fracture at the end of the cross country season, and now another injury. This, however, is only just some of the physical challenges Ruska has had to overcome in his high school career. From these two leg fractures, one of which a compound fracture, he battled mono in the spring of his sophomore year, and more recently, COVID-19.

But instead of sulking and complaining about what he couldn’t do, Ruska battled each challenge head-on. “It never seemed to bother him outwardly,” Eric Ruska said. “I think he realized good things can still come from what is bad on the surface.” After his leg fracture last summer, Ruska showed up to every cross country practice and meet, serving as an advocate and mentor for the rest of the team. Rundquist even said he was like another assistant coach. “The kids respect Vaughn and listen to him,” Rundquist said. “That is something earned over time.”

Looking towards the future

By not pushing his body and trusting the healing process, Ruska returned from injury last winter to compete in his final Nordic ski season, where he became a state qualifier, the proudest athletic achievement of his life.

“He is a once-in-a-career kind of kid,” Rundquist said.

With one more track and field season left in his lengthy high school athletic career, Ruska has his eyes set on his future. He plans on attending the University of Minnesota in the fall to pursue degrees in ceramics and engineering, with hopes of one day selling some of his pottery and possibly making a shop.

Rundquist sees Ruska’s potential sky-high in whatever arena of life he chooses, one of which could be coaching. “I see him taking something that does not exist and bringing it into being,” Rundquist said.

Whatever his future holds, Ruska will always lean on the work. The process. The everyday grind to be better today than he was yesterday. It may not be what most people look forward to, but Ruska’s insatiable drive for continued improvement keeps him moving onward.

“I enjoy the process.”