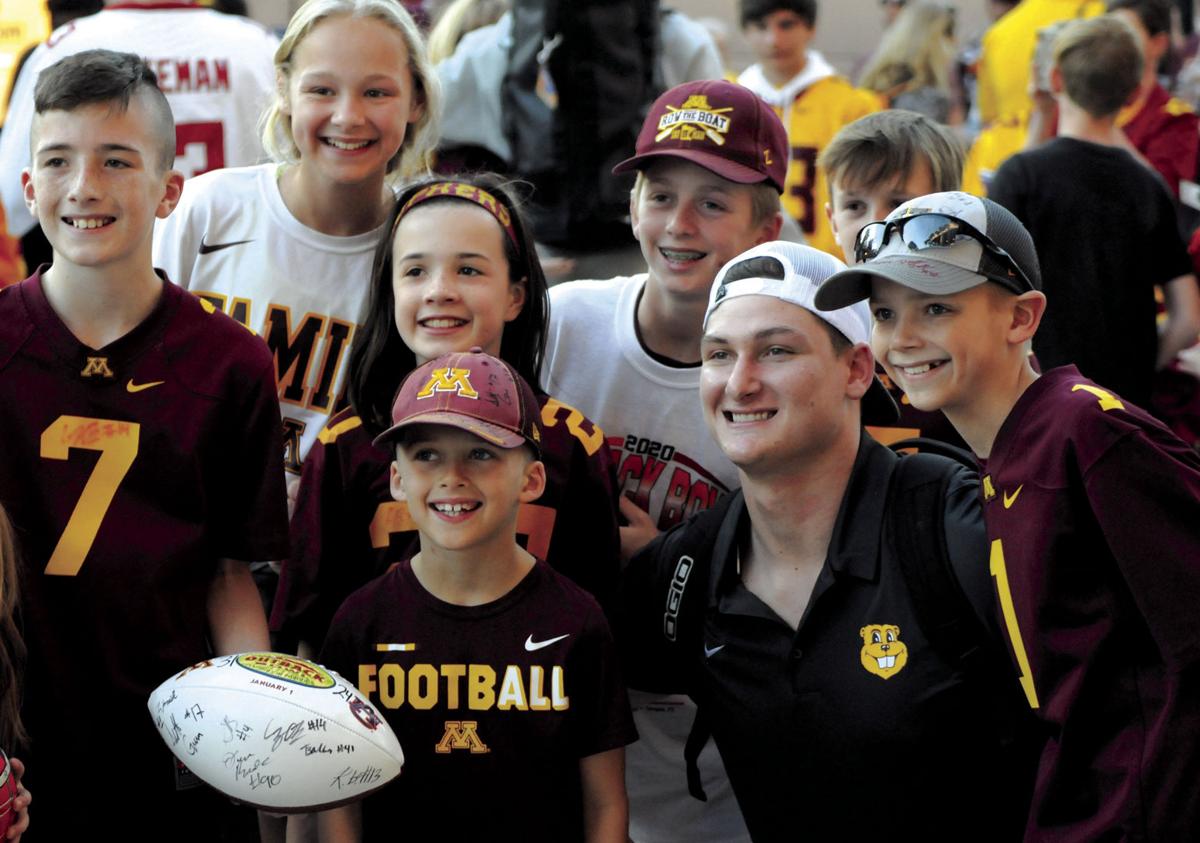 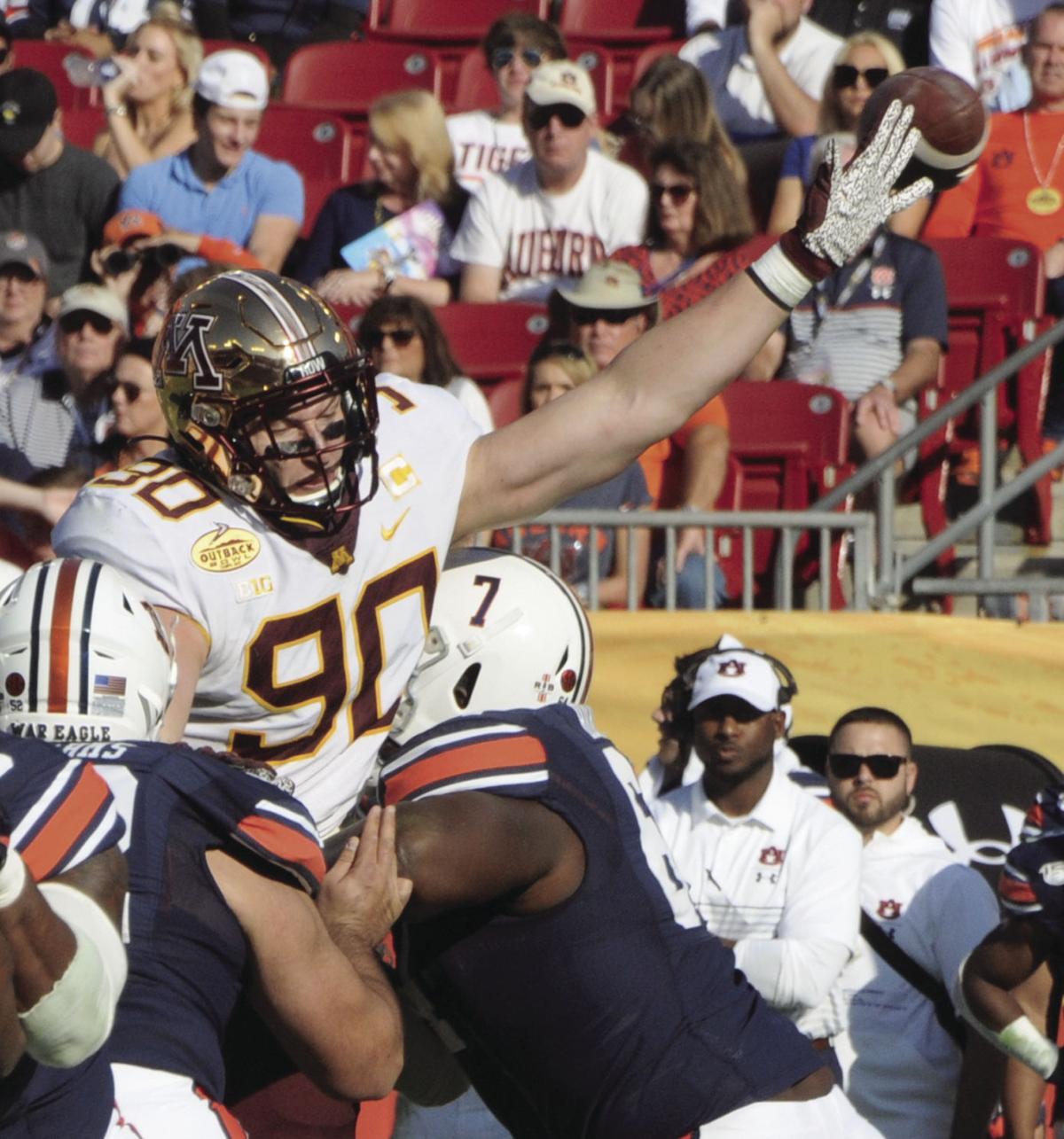 As the sun was setting on a gorgeous evening in Tampa on New Year’s Day, Sam Renner stood outside Raymond James Stadium, surrounded by his loved ones and a bunch of adoring young fans. The former Maple Grove Crimson just played his last game as a University of Minnesota Golden Gopher and was soaking in the glorious joyfulness after the Gophers’ thrilling 31-24 Outback Bowl win over No. 9 Auburn.

“Cannot ask for a better way to go out on,” said Renner, a 6-4, 275-pound fifth-year red-shirt senior starting defense tackle. “An 11-2 season at Minnesota is something that was not possible.”

Five years ago, a moment like this was almost impossible for Renner. A powerful fullback/tightend for the Crimson in 2014, Renner was playing in the fifth game of his senior season when he blew his knee out on the third play of the game.

“That was devastating because he was a dominant player for us as a fullback,” Maple Grove coach Matt Lombardi recalled. “He was a great blocker at his size and really was a major part in the success of our run offense that year.”

Maple Grove had a powerhouse offense that season with speedy running backs Isaac Collins and Clark Wieneke, dominant offensive linemen Ben Shoults and Kayode Awosika and a sophomore quarterback named Brad Davison. The Crimson made it to the state tournament semifinals and lost a six-point game to the eventual state champion Eden Prairie without Renner.

The knee injury cast a doubt on Renner’s dream of playing college football, but fate would intervene in a positive way.

“Coach Mike Sherels, who was the linebacker coach at Minnesota, visited our school just to touch base,” Lombardi recalled. “I informed him I had a kid that got hurt early in the year that is a good size kid that is very smart and a great player. He went up to Sam’s classroom, introduced himself, and within a week they recruited him as a recruited walk-on.”

Renner rehabbed his knee that off-season and went to Minnesota as a walk-on, following the footsteps of his great grandfather Luther Bergman, who played at the U in the 1930’s. But in his freshman year, he blew out his knee again. Most people thought his football career must be over, and even Renner admitted he had doubts about his future in football.

“Getting hurt that second time was really difficult because you are a freshman, a walk-on who didn’t play much in the first camp and everybody was kind of better than you,” Renner said. “You are like, ‘wow, I have to go through this again?’”

But it didn’t take Renner long to decide to stick with football.

“I decided that football is for me. I didn’t want to give it up,” he said. “I figured I had time and I said to myself, ‘You can do it…. you just have to commit yourself to this process and fall in love with this process.’”

So Renner committed to his second rehabilitation in two years. Through it all, Renner said he received tremendous support from his teammates.

“It was difficult but it was fun,” he said. “The people who made it all worth it are my teammates. It’s an amazing experience to go through this with them. It was so hard that you really created a great bond of brotherhood.”

Renner stuck with it and was rewarded. In his third year at the U, Coach PJ Fleck took over and offered Renner a scholarship.

“Sam remained a great student, and loved being a Gopher,” Lombardi said. “When Coach Fleck offered Sam a scholarship, that was a very proud moment for all of us because of everything he has overcome.”

“It’s something you have worked so hard for,” Renner recalled the moment when Fleck offered him a scholarship. “It really feels like the coaches decided this is a guy we want in our program and a guy we will give a scholarship to keep. It’s an amazing feeling.”

Renner has been a solid starting defensive tackle the past two seasons. At the Outback Bowl game, Renner and his fellow defenders stuffed Auburn’s vaunted running game and Renner came up with three tackles and a sack.

Renner not only excels in football, he also shines in the classroom. He was named First Team Academic All American this fall after making the second team last year. He was also honored by the team with the Butch Nash Award and Bob McNamara Award for his leadership on the field and in the classroom.

“Sam is everything that is good about the human spirit,” Lombardi said. “He is as resilient as they come. A great young man who is incredibly smart and has a world of possibilities in front of him. He is somebody that should inspire many because he had over 100 excuses given to him that seemed worthy by others to give up and he refused to do so quietly. What he has become now is a result of just how mentally tough Sam is and the belief in himself that allowed him to get to levels that others never dreamt about. His story is awesome.”

Renner has already graduated with a degree in applied economics and is now working on his master’s of accountancy. But he is not quite done with football yet because he will chase his dream to play at the next level. Renner will start training with fellow Gopher Thomas Barber at the Training House in Eagan in March to prepare for NFL tryouts.

After a long, emotional on field celebration with his brotherhood at the Outback Bowl, Renner reflected on his long and winding journey from Crimson Stadium to Raymond James Stadium.

“The last five years have been great. I grew a ton as a person,” he said. “It’s been a great season and a great story. I am hoping my story is not done.”