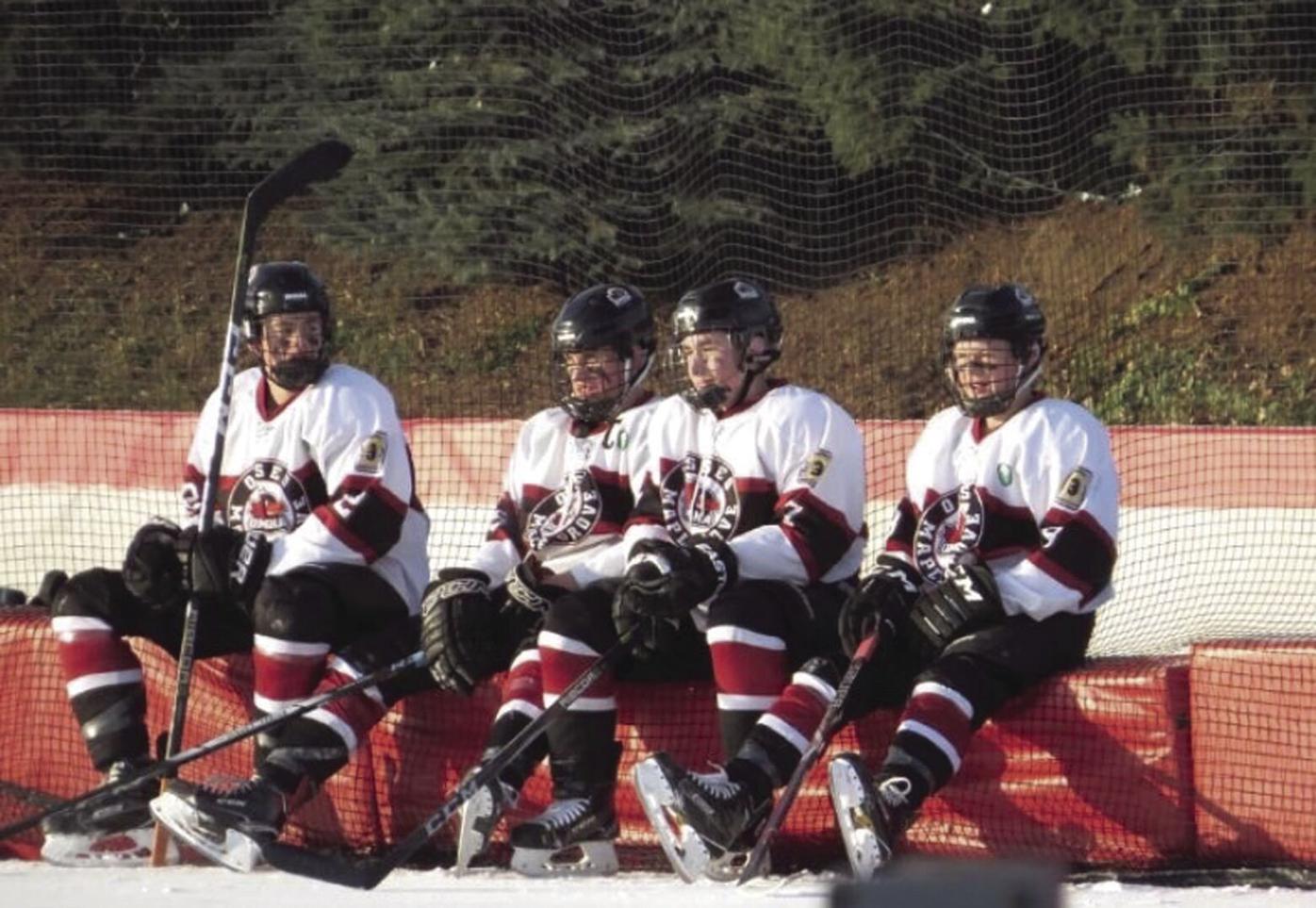 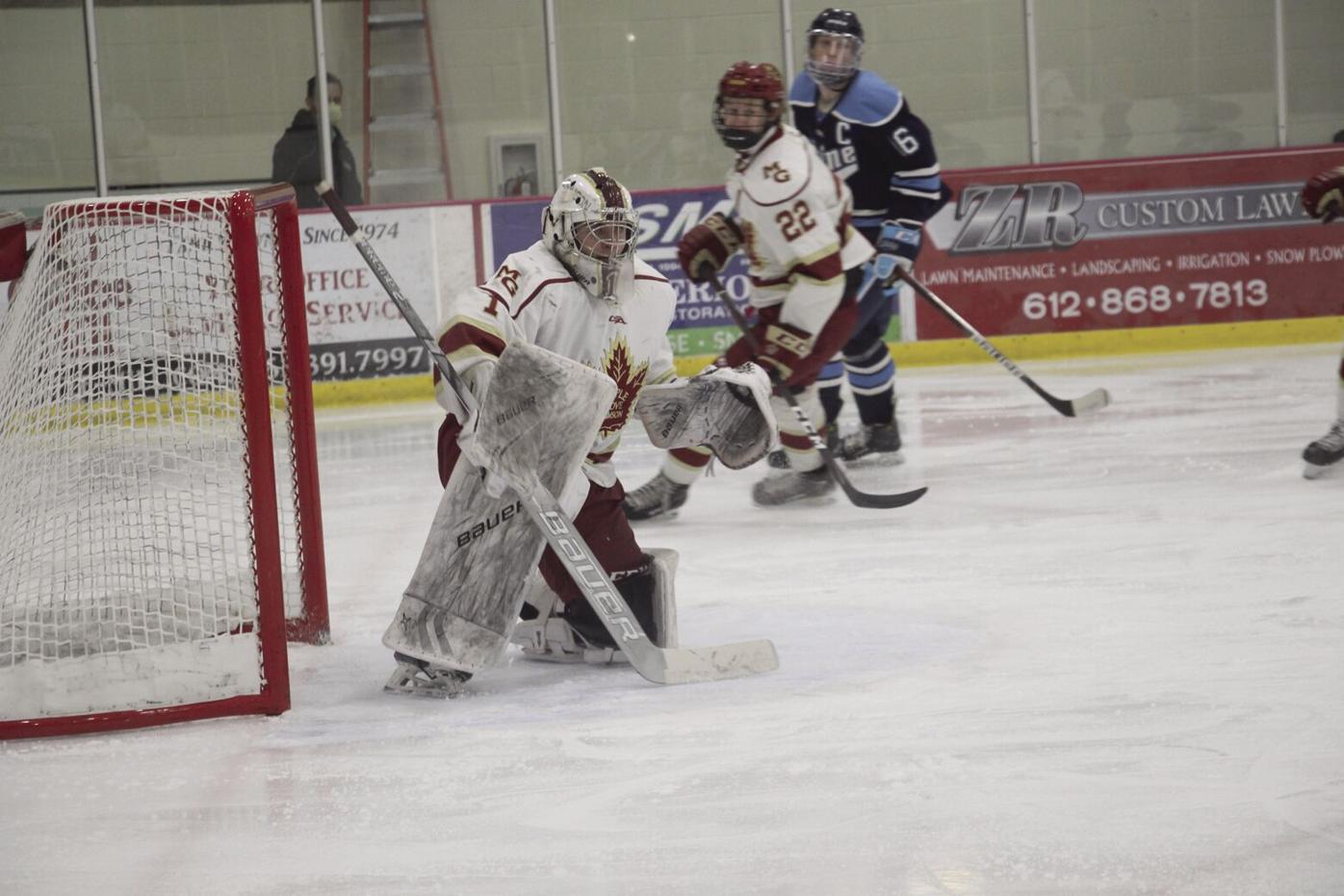 Wieneke protects the net against Blaine on March 13. (Photo by Sam Johnson)

Wieneke protects the net against Blaine on March 13. (Photo by Sam Johnson)

Throughout the regular season, the debate surfaced, as it usually does in the State of Hockey, as to who the best high school hockey team is. It is something that reverberates from the north shore to I-90.

As the section playoffs come to an end and the state tournament peeks around the corner, one team in the Northwest Suburban Conference is ready to prove that they deserve the title of best in state.

Maple Grove boys hockey is ready for their close-up.

And you can’t talk about the Crimson hockey squad without mentioning the 12 seniors who are seasoned and prepared to lead the way towards their goal of a state crown. Three of the seniors, forward Kyle Kukkonen, defenseman Henry Nelson and goalie Jack Wieneke, have played with each other since they were 10 years old. For nearly a decade, these three have grown and developed as players together, and now use that camaraderie and friendship to their advantage.

“We all have trust in each other that the next guy is going to do his job and get it done well,” Wieneke said. “We have faith in everyone on our team, from the first to the fourth line.”

Since these three guys each play different positions, they know what it is like to play good complementary hockey, and have seen each other get better through the years.

“Jack is that guy you want there back in the net because we know he’s going to make stops and come up big for our team whenever we need him,” Nelson said.

“Henry has one of the hardest shots I’ve seen,” Kukkonen said. “He is a good two-way defenseman and knows how to make big plays when we need him.”

“Kyle has one mode and always goes hard,” Wieneke said. “I have trust in him whenever he is out there.”

The more their rapport with each other grew on the ice, success followed. They ended up winning state titles in squirts, peewee, and bantam, three different age groups of youth hockey. As their senior year hits the final stretch, one more title is in sight.

“We’ve been working to complete the sweep I guess,” Kukkonen said, referring to the high school state title. With the gravitas Maple Grove has in their conference comes a big target on their backs each night. For many teams that are not postseason contenders, a matchup with the Crimson is their “playoff” game, a chance to compete against a great team, which the guys embrace.

“We like getting everyone’s best,” Wieneke said. “It makes us better as a team in the long run.”

“Every team is going to give us their best game and we saw that with a lot of teams,” Nelson said. “We wanted to prove to them that we are the best team in the state.”

Before their game against Lakeville South on March 9, the Crimson had done just that, running through their opponents and going 15-0, elevating them to the top-ranked team in the state. If you ask some of the guys, blowing out team after team created contentment with their standing as the top team. But after falling to the Panthers 4-3, their drive for success got relaunched. “I think it was good to get that loss in there just so we could get our hunger back,” Kukkonen said.

“We really needed that to show us we can come back from a loss,” Nelson said.

As acutely focused as they are in the big moments, they are just as relaxed when off the ice. According to Kukkonen and Wieneke, they rely on Nelson and fellow senior Grant Zick to loosen the mood before hitting the ice in the locker room, whether it is cracking a joke or playing music.

For a team with two Mr. Hockey finalists, Kukkonen and Nelson, and a Frank Brimsek finalist for top goalie, Wieneke, the talent of this Crimson team top-to-bottom is evident. But as a collective group, their confidence is as sky-high as their playoff hopes.

“If you worry about losing, you’re not focused on winning,” Kukkonen said. “We all have confidence in each other.”

As they get ready to host Centennial for the Section 5AA championship on March 25, these guys realize that with this being their senior year, the moments created in the final games of the season will last longer than any final score or state tournament.

“It is a special group,” Wieneke said. “At the end of the day we’re not going to remember the score of the games, but we’ll remember all the good memories we made.”

This time of the hockey season wouldn’t be complete without a Minnesota high school tradition: growing out hockey hair. This means as of March 1, no hair cuts. Some, like Nelson, have gone all season without a cut, whereas Kukkonen typically rocks short hair. But in the name of team unity, sacrifices had to be made.

One more memory is coveted from this high-powered Crimson team that would fill a void both in each player’s individual trophy case and the school’s: a state championship. Between now and the final horn at the state tournament in Xcel Energy Center, let the debate rage on as to the best team in the state.

Maple Grove is hopeful to have the last word.