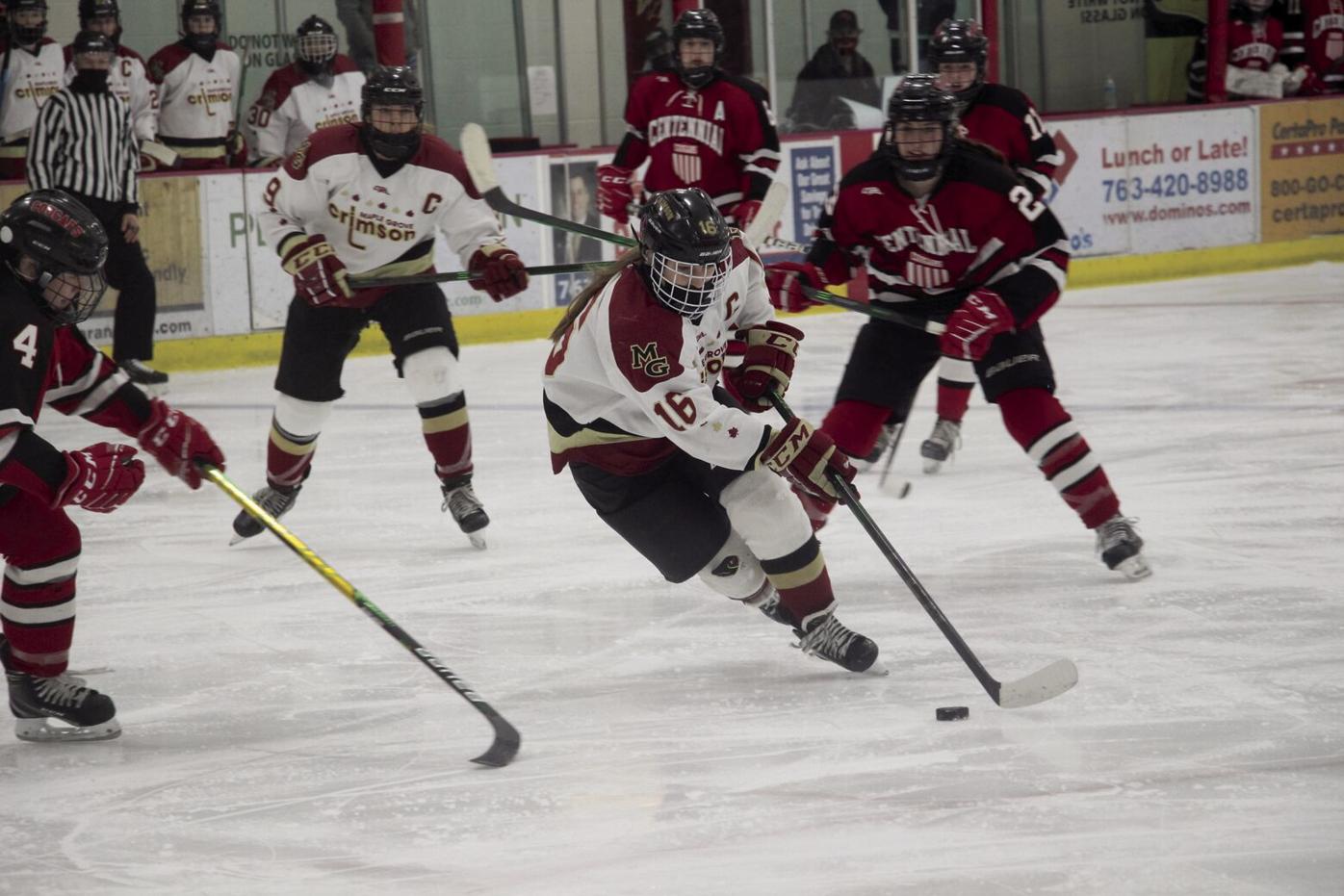 Crimson senior forward Lauren Stenslie makes a move into the offensive zone against Centennial on Saturday. Stenslie is committed to playing for the University of St. Thomas. (Photo by Sam Johnson) 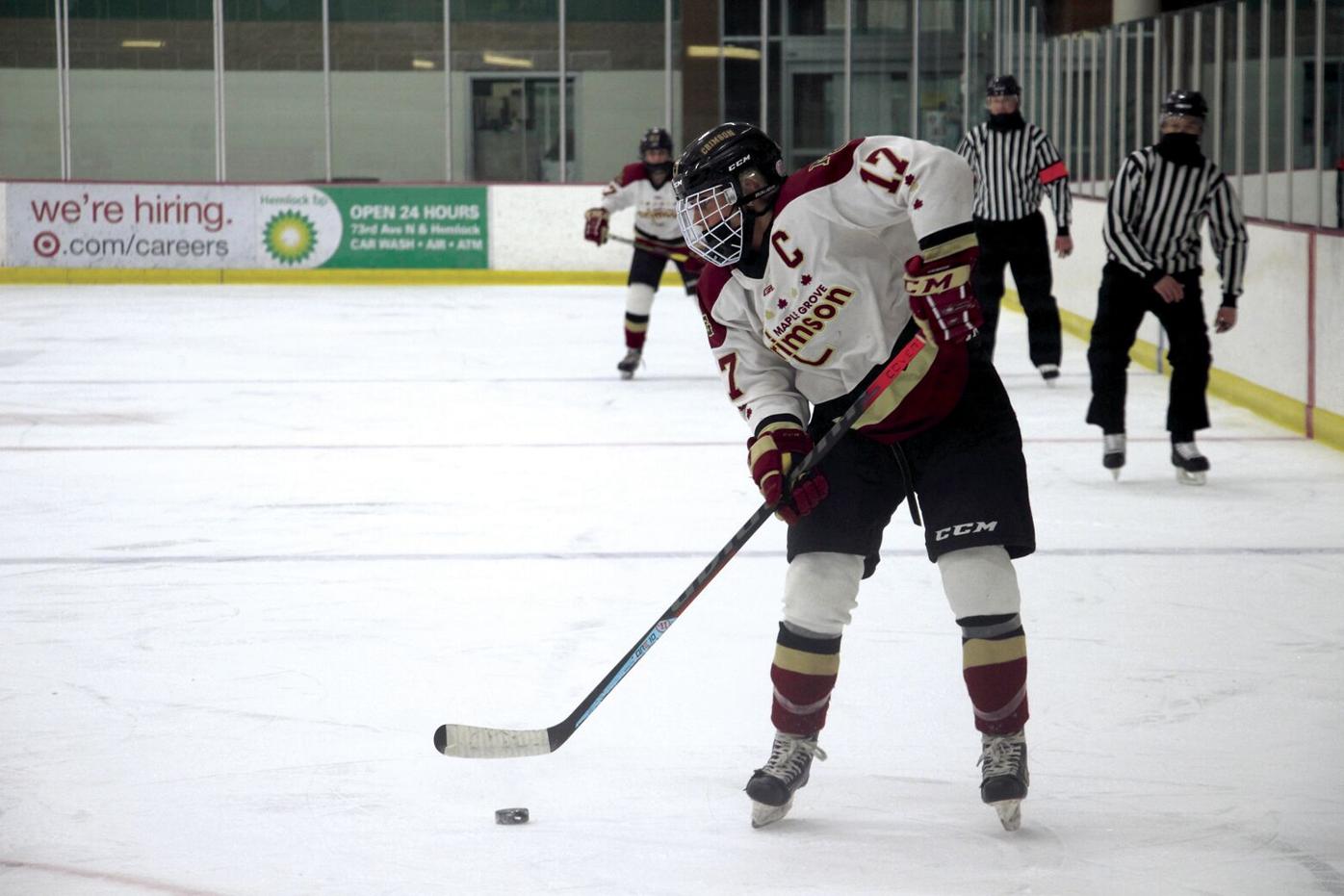 Senior forward Tristana Tatur controls the puck against Centennial on Saturday. Tatur is committed to playing for the University of Minnesota. (Photo by Sam Johnson) 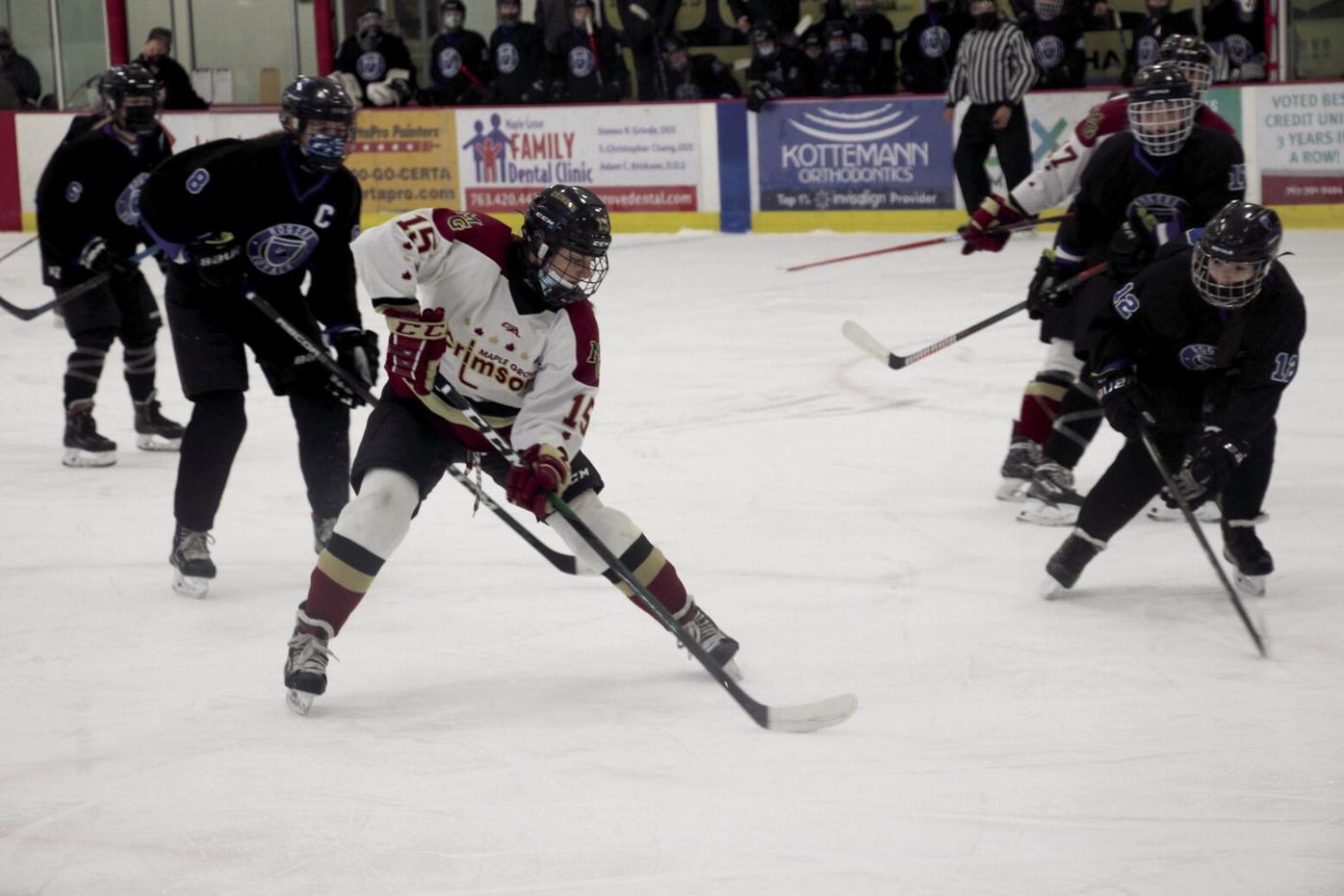 Junior forward Taylor Holm gets ready to pass the puck against Rogers on March 18. (Photo by Sam Johnson)

Crimson senior forward Lauren Stenslie makes a move into the offensive zone against Centennial on Saturday. Stenslie is committed to playing for the University of St. Thomas. (Photo by Sam Johnson)

Senior forward Tristana Tatur controls the puck against Centennial on Saturday. Tatur is committed to playing for the University of Minnesota. (Photo by Sam Johnson)

Junior forward Taylor Holm gets ready to pass the puck against Rogers on March 18. (Photo by Sam Johnson)

A year after losing in the state semifinals, the Maple Grove girls hockey team started their chase for a third consecutive section title on March 18 by playing Rogers. The Crimson swept the season series against the Royals 2-0, winning by a combined score of 8-2. However, the last time these two teams met, Rogers took Maple Grove to overtime, where the Crimson survived 2-1.

Now with a trip to the section title game on the line, every little facet of the game is magnified.

After beating Champlin Park 2-0 in the quarterfinals, Rogers came out and looked like the fresher team right away, putting pressure on senior Crimson goalie Brooke Cassibo.

But Cassibo and the Maple Grove defense withstood the rush and in the process formed their own offensive attack. They outshot Rogers 9-7 in the first frame, yet the score stayed knotted at zero heading into the second period.

With the same energy emitted in the first period, Rogers found the back of the net first with a goal from Paige Vreeman midway through the frame, giving the Royals a 1-0 lead.

The energy of the building most of the period came from the west end of the arena, where the visitors and their fans sat, with cheers and cowbells their rallying cry. Whether it was nerves or rust, Maple Grove looked a step slower than Rogers for the first 30 minutes of the contest.

“Pucks to the net” was the message from head coach Kelly Crandall to her team, and late in the second period, the scoring dam finally opened.

It looked like the Royals may hold the lead going into the final period, but with two minutes left in the second, Crimson forward Stella Retrum fired a shot past Royals goalie Lauren Larson’s pads to tie the score 1-1. Scoreless the rest of the period, the third and final frame provided drama fit for win-or-go-home playoff games.

Rogers again struck first in the third with a goal from Ava Johansson to make it 2-1. But like in the second, the Crimson showed resilience. Lauren Stenslie scored on a power play with nine minutes left to make it 2-2.

Then, with five and half minutes left, their senior captain Tristana Tatur took the puck and fired a bullet past Larson to give the Crimson their first lead of the game 3-2.

The Royals pulled their goalie with less than 90 seconds left and got a couple of scoring opportunities, but Cassibo shut the door the rest of the way. Maple Grove survived Rogers’ upset bid, winning 3-2.

“I think we had a gut check, a character check,” Crandall said. “You got to earn every point in playoff hockey, nobody is going to roll over. Everyone is going to give us their best game and best effort. The girls hung in there and kept working hard.”

In search of their third consecutive section crown, the Crimson hosted third-seeded Centennial on Saturday and the Cougars were ready to disrupt any coronation plans early.

A mishap behind the net from Cassibo resulted in a Cougars goal less than three minutes into the third period. Just like in the semifinal, Maple Grove answered. Retrum scored just two minutes later to tie it up at 1-1, but Lauren O’Hara gave Centennial a 2-1 edge midway through the period.

In the second frame, the Crimson came out peppering the freshman Cougars goalie Kaitlin Gross with shot after shot, with nothing to show for it. And with 12 seconds left in the period, Centennial pushed a shot past Cassibo to double their lead to 3-1.

With the pressure to keep their season alive, Maple Grove struggled to get quality shots on net, due in large part to a swarming Centennial defense. The Cougars added a late empty-net goal and advanced to the state tournament with a 4-1 win.

“We really controlled the puck most of the game, but at the end of the day, whoever is able to get it in the net more is going to win,” Crandall said.

For a program that has seen the past two years end in the state tournament, the legacy of the departing seniors is something that will always be remembered.

“The seniors are a huge part of our program,” Crandall said. “They made their mark and will forever be remembered for their contribution both on and off the ice. It is going to be sad to see them go.”