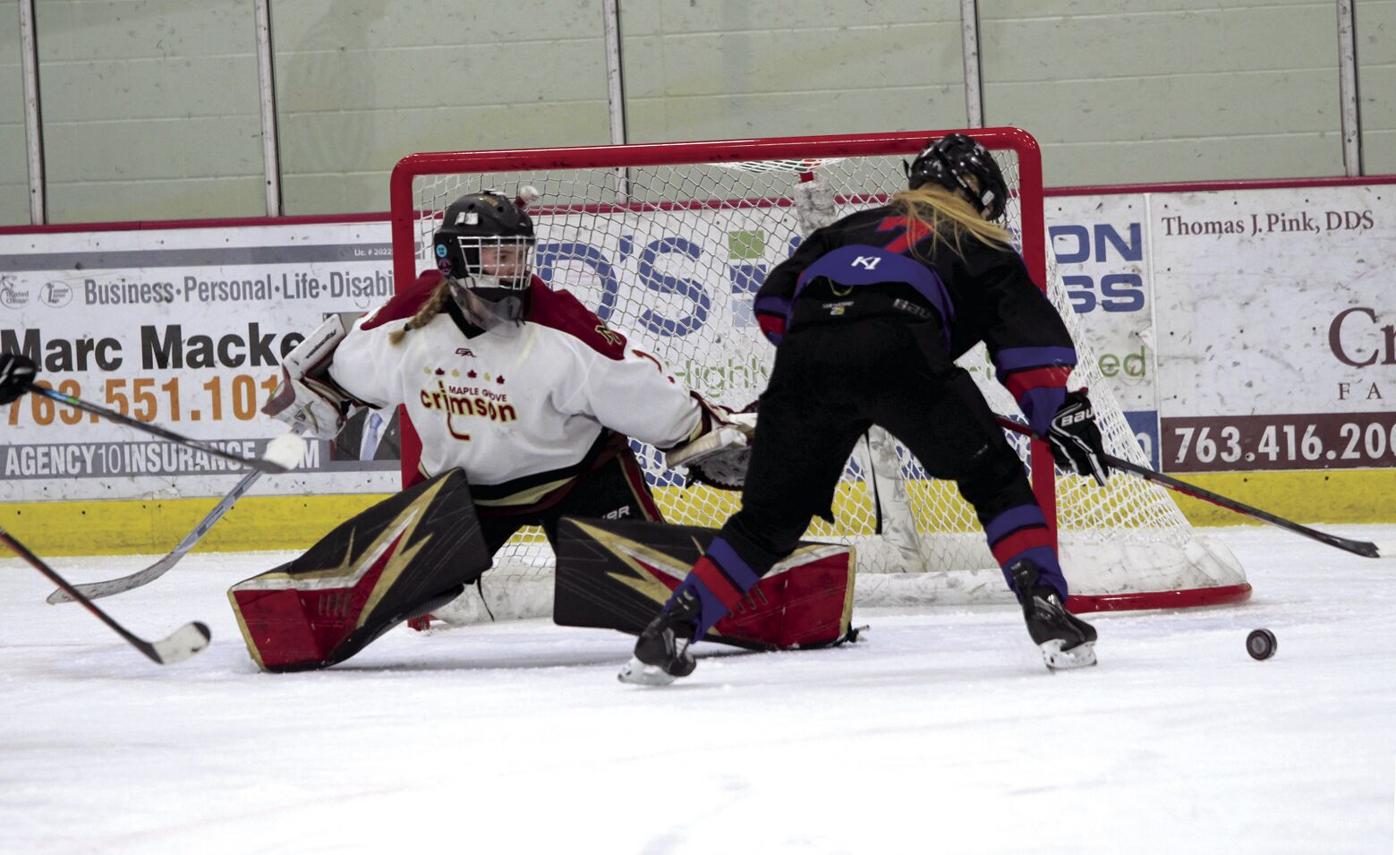 Maple Grove sophomore goalie Dani Strom prepares to make a save against Gentry Academy Jan. 6. Strom stopped 27 shots versus the Stars, one game after notching 45 saves against Rogers. (Photos by Sam Johnson) 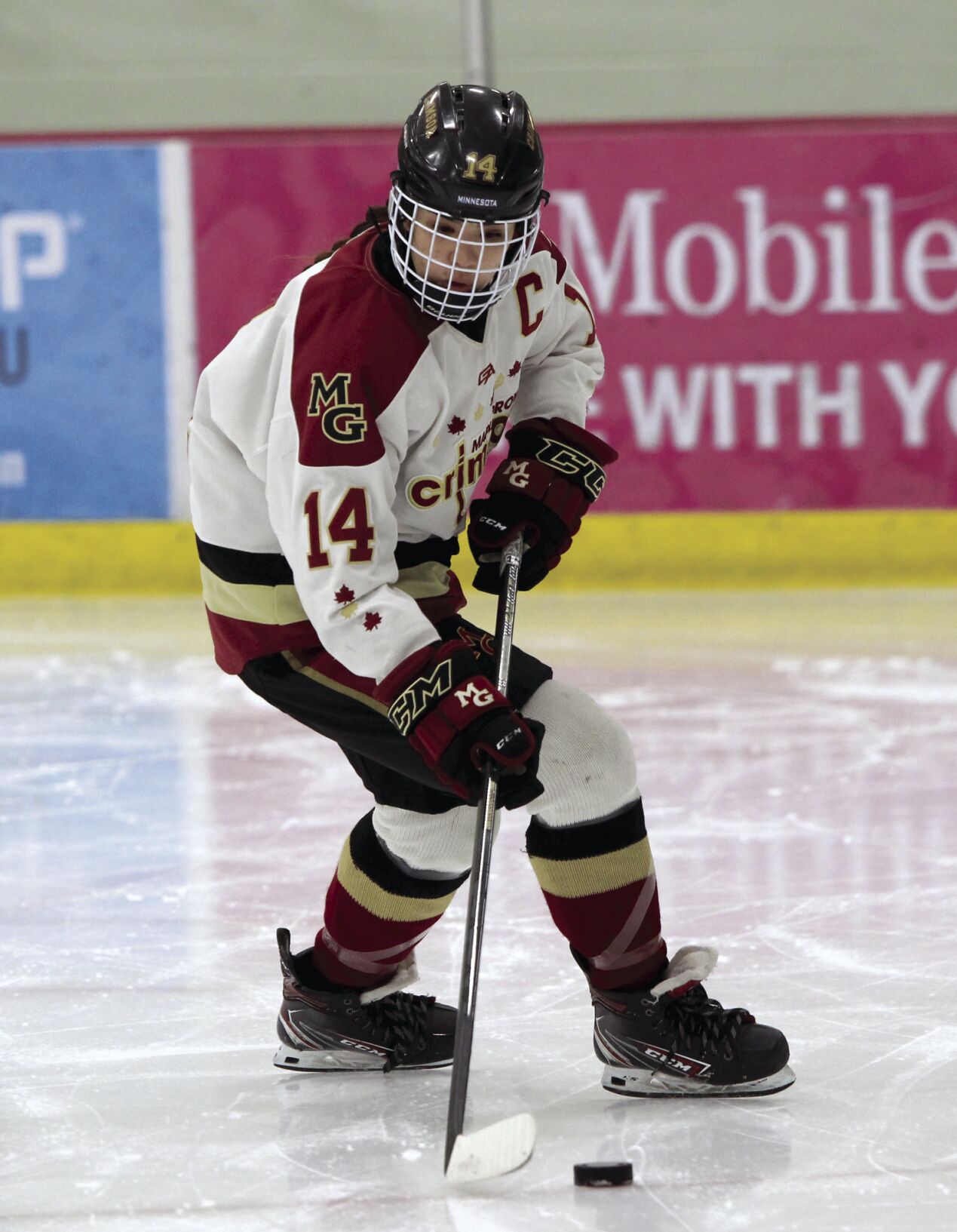 Maple Grove sophomore goalie Dani Strom prepares to make a save against Gentry Academy Jan. 6. Strom stopped 27 shots versus the Stars, one game after notching 45 saves against Rogers. (Photos by Sam Johnson)

After losing to two of the state’s top-ranked teams in late December, Andover and Edina, by a combined score of 9-2, Maple Grove’s girls hockey squad needed a spark to get back on track, and they were hoping a home contest against 10th-ranked Rogers (11-3-1) Jan. 4 would do just that.

With the score tied at 2-2 heading into overtime, Maple Grove senior forward Tia Rice proved to be the match that ignited the spark, scoring a game-winning goal to give the Crimson a 3-2 win.

Maple Grove’s leading goal scorer, junior forward Stella Retrum, gave the home team an early advantage with two first-period goals, with assists coming from team leader sophomore forward Bella Shipley, junior defender Madi Soukup, and Rice. But Rogers, who had won six of their last eight games, started a comeback with an early second-period goal, and eventually tied it up in the first minute of the third period.

In the opening frame, both teams fired 10 shots on goal, but from that point on in regulation, the Royals outshot the Crimson by a whopping margin of 35-16. Yet, stellar play by the Maple Grove defense and sophomore goalie Dani Strom, who finished tied for a season-high with 47 saves, kept the score knotted at 2-2 as the game moved into an extra session.

Then, nearly six minutes into overtime, Rice notched the game-winning goal off of assists from Shipley and Retrum, and the Crimson began 2022 with a top-ten victory.

Next up Jan. 6 for Maple Grove was a familiar foe in the seventh-ranked Gentry Academy Stars (11-3-0). In early December, the Crimson traveled down to Vadnais Heights to face the Stars and left with a 4-1 loss due to surrendering three unanswered goals in the final 18 minutes of action.

“If you’re not winning you’re learning,” Maple Grove head coach Jim Koltes said. “Even those games we lost, we were learning things about us.”

But this time around, the Crimson stifled the Stars, took advantage of timely scoring chances, and avenged their previous loss with a 3-1 victory. After a scoreless first period which saw a combined seven shots on net, Maple Grove got on the board first off of a nice centering pass from senior forward Taylor Holm to junior forward Ella Olson, who found the back of the net.

Then, less than a minute later, Retrum fired a shot on net that bounced high off of the goalie and tricked past the goal line to double the Crimson lead, making it 2-0. Later in the period, Gentry Academy cut the lead in half thanks to a goal from junior forward Cara Sajevic and the lead remained 2-1 in favor of Maple Grove heading to the third.

In their last go-around, Gentry Academy outshot Maple Grove by a whopping 49-18 margin, which led to their 4-1 win over the Crimson. This time, Maple Grove put the clamps on the Stars, allowing only 19 shots on net and four in the third period, which gave the Crimson plenty of opportunities to add to their lead.

Midway through the third, sophomore defender Grace Erickson did just that on the power play, giving the home team a 3-1 lead, which ended up being the final score. Strom, coming off of 45 saves against Rogers, made 27 saves versus the Stars. “Dani was super sharp,” Koltes said. “It helps us a lot when Dani is playing like that.”

When Koltes was first hired in the summer, he told his coaching staff that by early January and after learning the team’s systems, he hoped that the girls would be hitting their stride. And after beating two top-10 teams back-to-back, the Crimson seem to be doing just that. “We feel pretty good with where we are right now,” Koltes said. Maple Grove improved to 10-4-2 on the season.