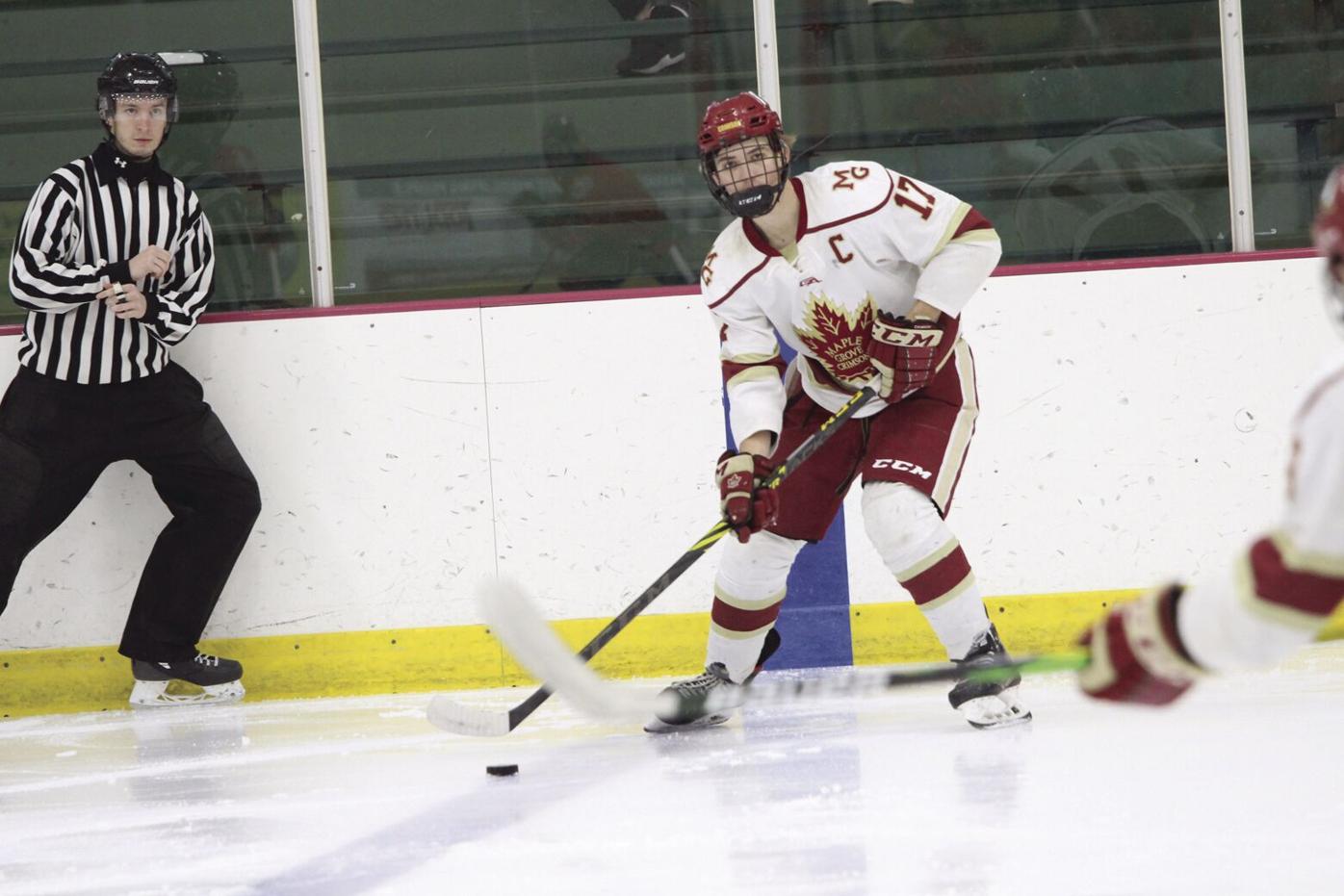 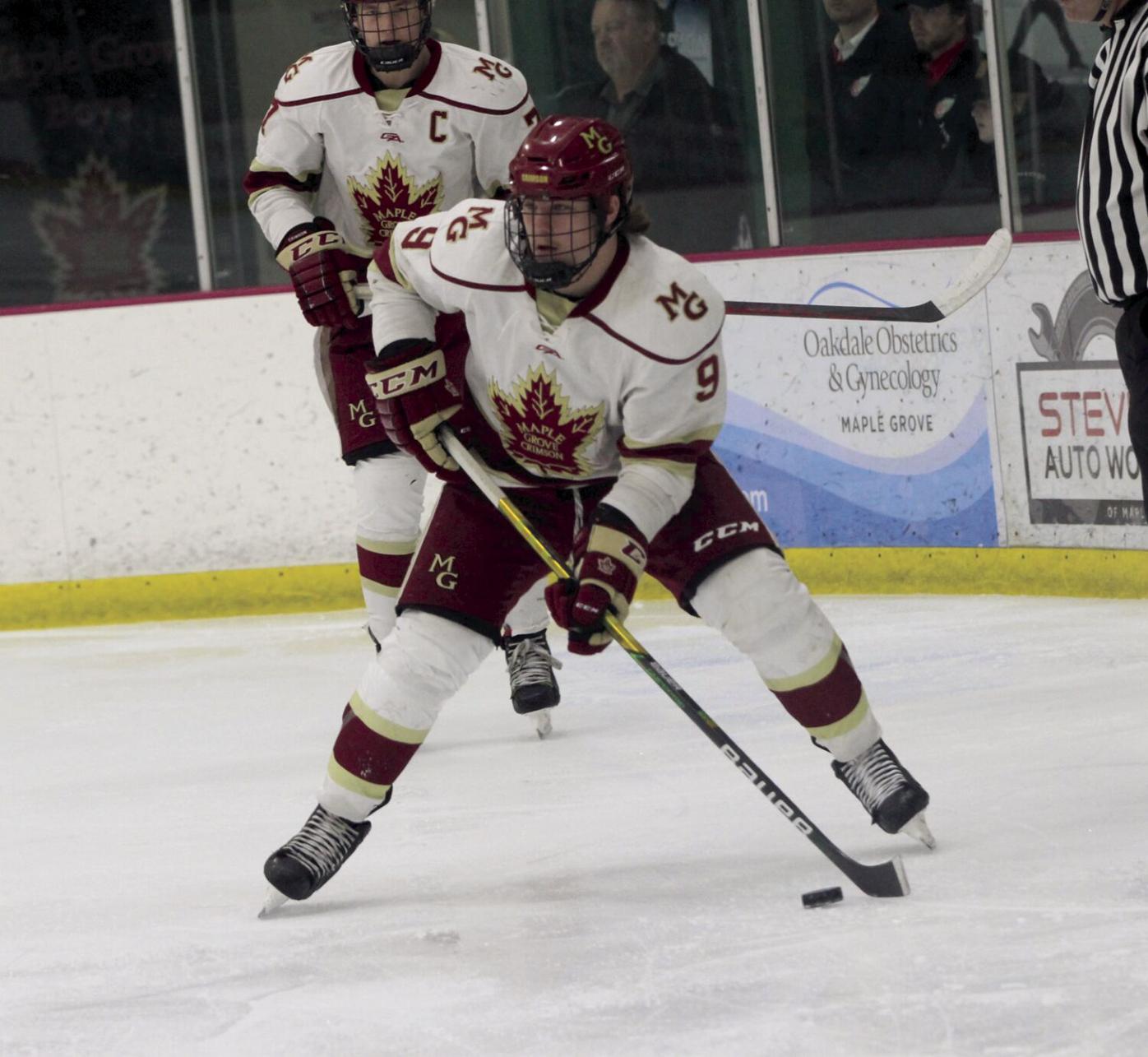 When the seventh-ranked Maple Grove boys hockey squad traveled to Centennial (7-2-0) to face the Cougars Jan. 6, the Crimson sought to build off of momentum at the end of 2021, where they knocked off the then-top ranked Lakeville South Cougars. But their conference rivals were looking to spoil their Thursday trip, especially after Maple Grove previously beat Centennial 3-2 Dec. 11.

After the Cougars jumped out to a 4-1 lead in the second period, the Crimson fought back to cut it to 4-3, but couldn’t stop Centennial from adding two more and sealing a 6-3 victory.

Within the first minute of action, the Crimson struck first with a goal from junior defenseman Luke Margenau, but the Cougars responded midway through the period with two goals in a minute that gave them a 2-1 lead heading into the second frame.

Centennial, as they did in the first period, took advantage of the scoring chances allotted to them and capitalized twice more in the second to extend their lead to 4-1. But Maple Grove answered with a run of goals in the third, starting with a power-play score from junior forward Finn Brink and then senior defenseman Aaron Tollas added another goal to cut the three-goal lead to just one.

However, the Cougars would again respond, this time putting the nail in the coffin with two goals later in the frame to salt away a 6-3 win. Maple Grove senior goalie Toby Hopp made 23 saves. After the game, Maple Grove head coach Todd Bergland told his team that consistency should be their focus.

“We have to play the complete 51 minutes. That is what we’re pushing hard to the team,” Bergland said.

Overall, Bergland said that besides his top line, the team is made up of young guys who are getting valuable experience right now.

“These guys are still learning. Even though our first line has returners from last year, we have by and large a young team, especially our defensive core,” Bergland said. “They’re learning the valuable lessons now that are going to be with them the rest of the season. Every game they’ve gained confidence and we’ve continued to grow as they grow. We’re going to get that much better come playoff time.”

But two days later, the Crimson got back on the right track with a dominant 10-0 shutout victory over Coon Rapids (5-5-0). Less than seven seconds into the game, junior forward Landen Gunderson got Maple Grove on the board with a nifty goal off an assist from Brink, a foresight of more to come in this contest. Junior forward Blake Steenerson notched the Crimson’s second goal of the period to make it 2-0, and senior forward Josh Giuliani tallied two more goals, giving Maple Grove a 4-0 lead heading into the second period.

The Crimson scoring fest continued in the second, when Gunderson, who recorded a team-high five points, junior forward Jack Kernan, and senior forward Jerren Giese each recorded a goal, making it 7-0. Then in the third, Giuliani recorded a hat trick with his third goal of the afternoon, followed by scores from sophomore defenseman Danny Nelson and senior forward Nathan Jaglo. Junior goalie Jack Roach, who played in his third game this season, recorded a 15-save shutout as the Crimson improved to 8-4-1 on the season.

Regardless of the inconsistencies shown in the first half of the season, Bergland is confident in this team’s potential come playoff time. “If we play our game, there is not a team in the state that scares me. We have the makings of something special. But so far we just can’t seem to string it together.”