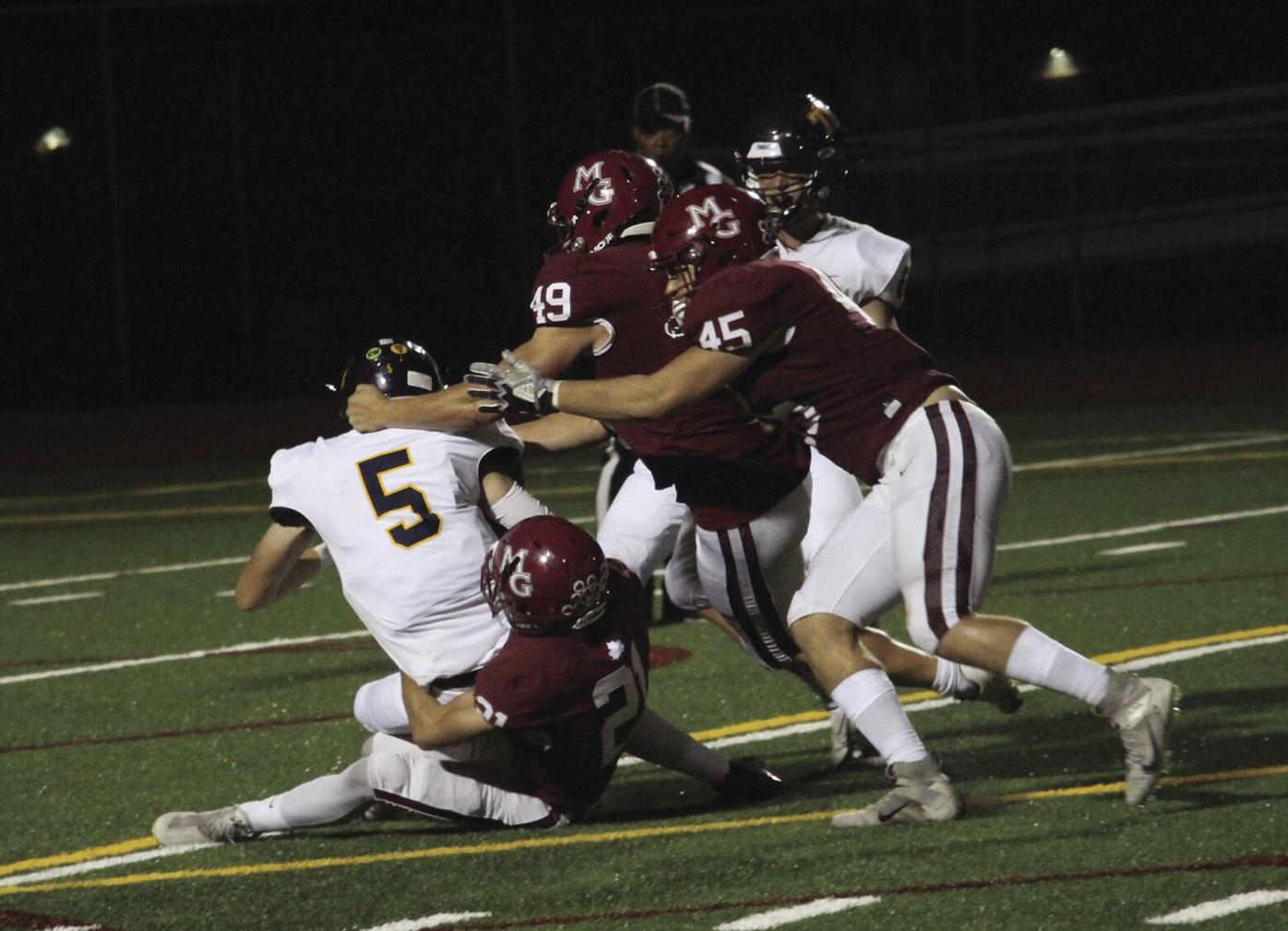 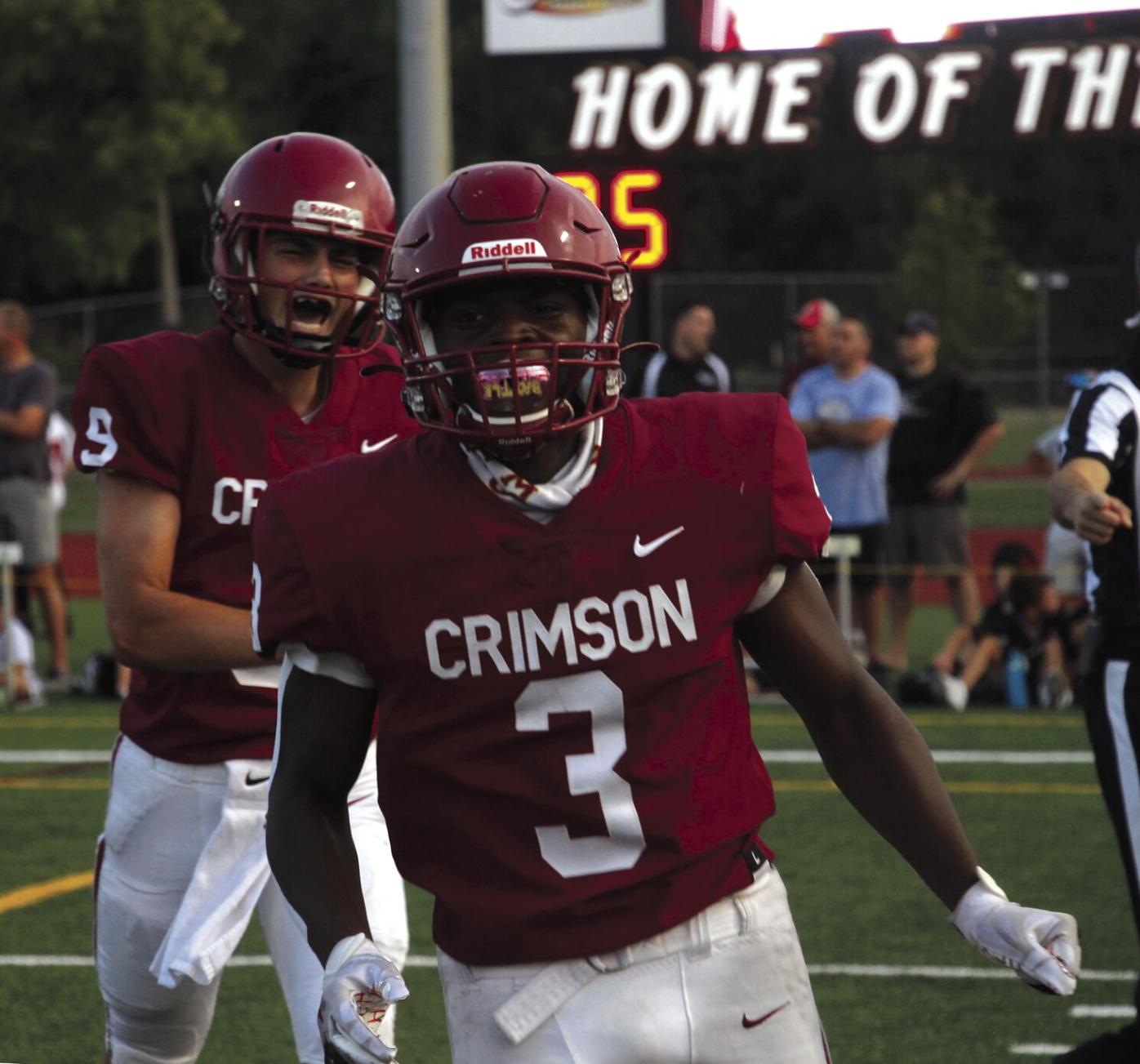 Crimson Jacob Kilzer (left) and Derrick Jameson walk off the field after Jameson’s opening touchdown of the game against Totino-Grace on Sept. 10 at Crimson Stadium. For the second game in a row, Jameson ended with four total touchdowns, including 146 yards from scrimmage. 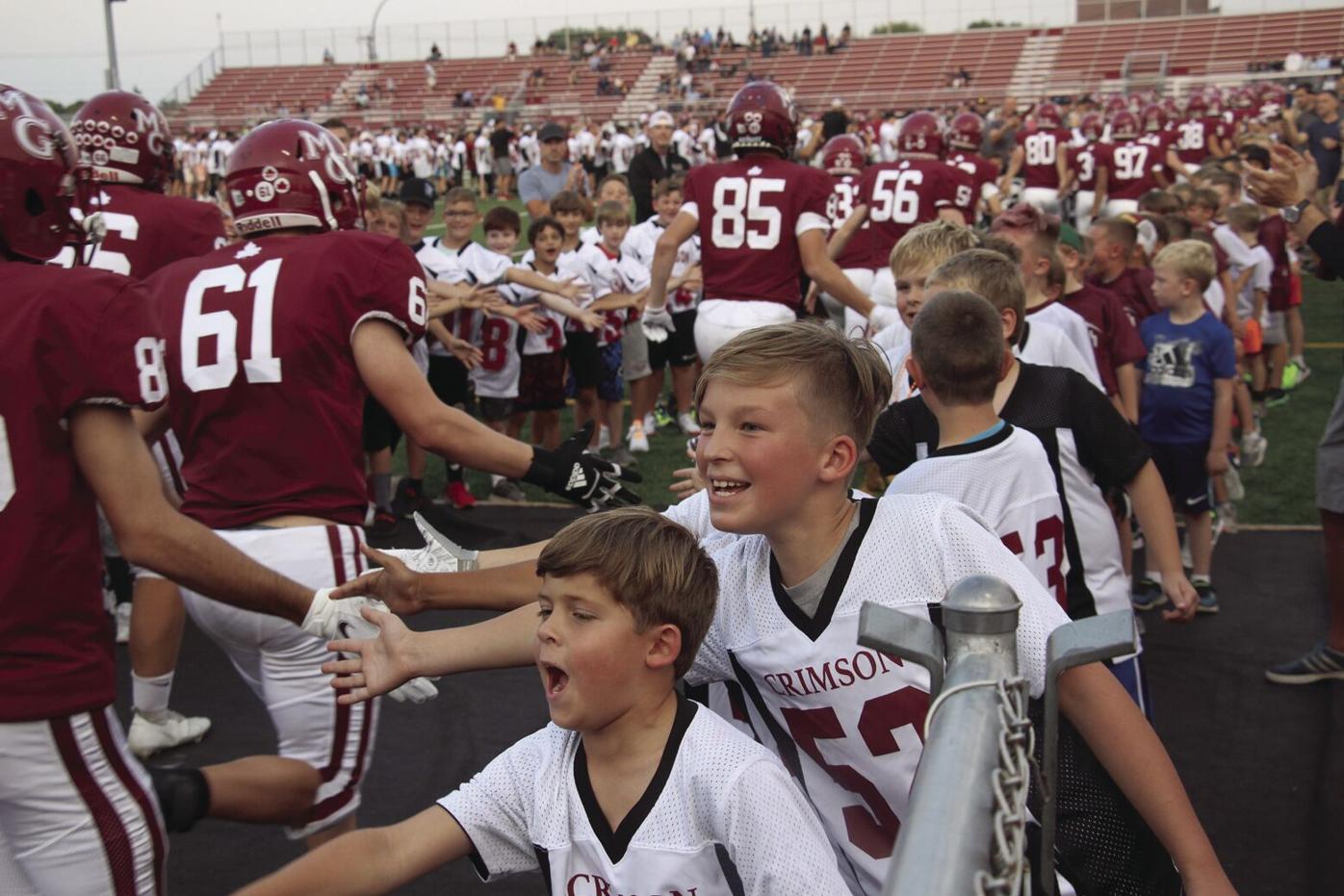 Maple Grove youth football players welcome the varsity football team to the field before their first home game against Totino-Grace on Sept. 10.

Crimson Jacob Kilzer (left) and Derrick Jameson walk off the field after Jameson’s opening touchdown of the game against Totino-Grace on Sept. 10 at Crimson Stadium. For the second game in a row, Jameson ended with four total touchdowns, including 146 yards from scrimmage.

Maple Grove youth football players welcome the varsity football team to the field before their first home game against Totino-Grace on Sept. 10.

Six-hundred-eighty-six days. That is how long it had been since fans last packed the bleachers at Crimson Stadium to watch a Maple Grove football game. And on Sept. 10, normalcy once again returned to “The Grove” as the Crimson hosted Totino-Grace in their 2021 home opener. After dominating their crosstown rivals Osseo the week prior, Maple Grove’s dynamic offense and steady defense once again led the way to another victory, beating the Eagles 56-18.

Before the opening kickoff, festivities were already underway on the field. Maple Grove Senior High principal Dr. Bart Becker took the field with Bally Sports North’s Kevin Gorg to say a few words about the new scoreboard, which was unveiled for the first time that night. Along with a new, state-of-the-art scoreboard and sound system, a new turf field made its debut. Then before the varsity players came out onto the field, Maple Grove youth football teams gathered by the Crimson bench to welcome the squad.

Two years ago, everything about the night would be normal: the loud, energetic crowd, the smell of burgers on the grill, and the packed bleachers. But the last 18 months have been anything but normal, and to have a taste of what Friday nights have always been like was a welcomed sight for everyone.

“The beauty of football is we start the school year with it,” Maple Grove head coach Matt Lombardi said. “It was exciting to see those kids out there. You get a stadium rocking, and that says a lot about the high school community. Friday nights are a celebration.”

For Maple Grove fans, the celebratory mood didn’t stop when the pigskin was kicked off. Like they did against Osseo, the Crimson took their first offensive drive and marched down the field, capped off by a 47-yard touchdown run courtesy of senior star running back Derrick Jameson. “Derrick is so fast and so athletic and our offensive line was making blocks all night,” junior quarterback Jacob Kilzer said. “We run so easily when they block like that.”

A missed extra point made it 6-0, but after the defense held Totino-Grace to a three-and-out, Kilzer launched a deep throw to senior wide receiver Cole Newell, who pulled it in and ran into the endzone to make it 13-0. “It’s exciting for me to know that Jacob is a second-game junior,” Lombardi said. “He is getting better and better each time he’s out there. He has a chance to be a great quarterback.”

“I feel like the first game against Osseo I was able to settle in and now I’m ready,” Kilzer added. “We’ve been working all week...I have seniors helping me prepare and I was ready for tonight.”

It looked like Maple Grove would do to the Eagles what they did to the Orioles: run away and never look back. However, Totino-Grace would have something to say. After a fumble from Jameson on a punt return late in the first quarter, the Eagles took advantage of the short field and scored to cut the lead to 13-7 and then on the next possession hit a field goal to make it 13-10. Suddenly, Maple Grove hit a rough patch. “I think it was good for our kids to feel that tough stretch in the game,” Lombardi said.

It may have looked uncertain for a moment, but Crimson showed their resilience, in all three phases of the game. On their next offensive possession, after the lead was trimmed to three points, Jameson scored his second touchdown of the game to make it 20-10. Maple Grove’s defense shut down the Eagles offense on their next possession and forced another three-and-out. That is when the special teams made their presence known. On fourth down, senior linebacker Jace Uzzell, who finished the game with seven total tackles, four tackles for loss, came rushing up the middle and blocked the Eagles punt, electrifying the crowd and setting up a 10-yard touchdown run from Kilzer.

Once again, the Crimson defense slammed the door shut on any Totino-Grace momentum and forced another punt. Jameson, standing and waiting for the ball to find his arms, showed his special play-making ability and ran it back for a 50-yard touchdown. “Derrick is electric when he has the ball,” Lombardi said. “He always poses a threat to go the distance.”

The second half was more of the same for the home team. Jameson scored his fourth total touchdown of the evening midway through the third quarter, marking two straight games with four total touchdowns scored. Through two games this season, Jameson is tied for the state lead in rushing touchdowns with six and leads the state in punt return touchdowns with two. “I get a lot of help from my linemen,” Jameson said. “They were working hard during practice and make me look good. I just give thanks to them.”

Now 2-0, a non-conference showdown awaits the Crimson on Friday: 2-0 and eighth-ranked Minnetonka. The Skippers have allowed a combined total of 10 points and 408 yards through their first two games, meaning Lombardi is excited to see how his seventh-ranked Crimson handles an early-season test. “Minnetonka will be a different type of test...We love playing teams like that,” he said.