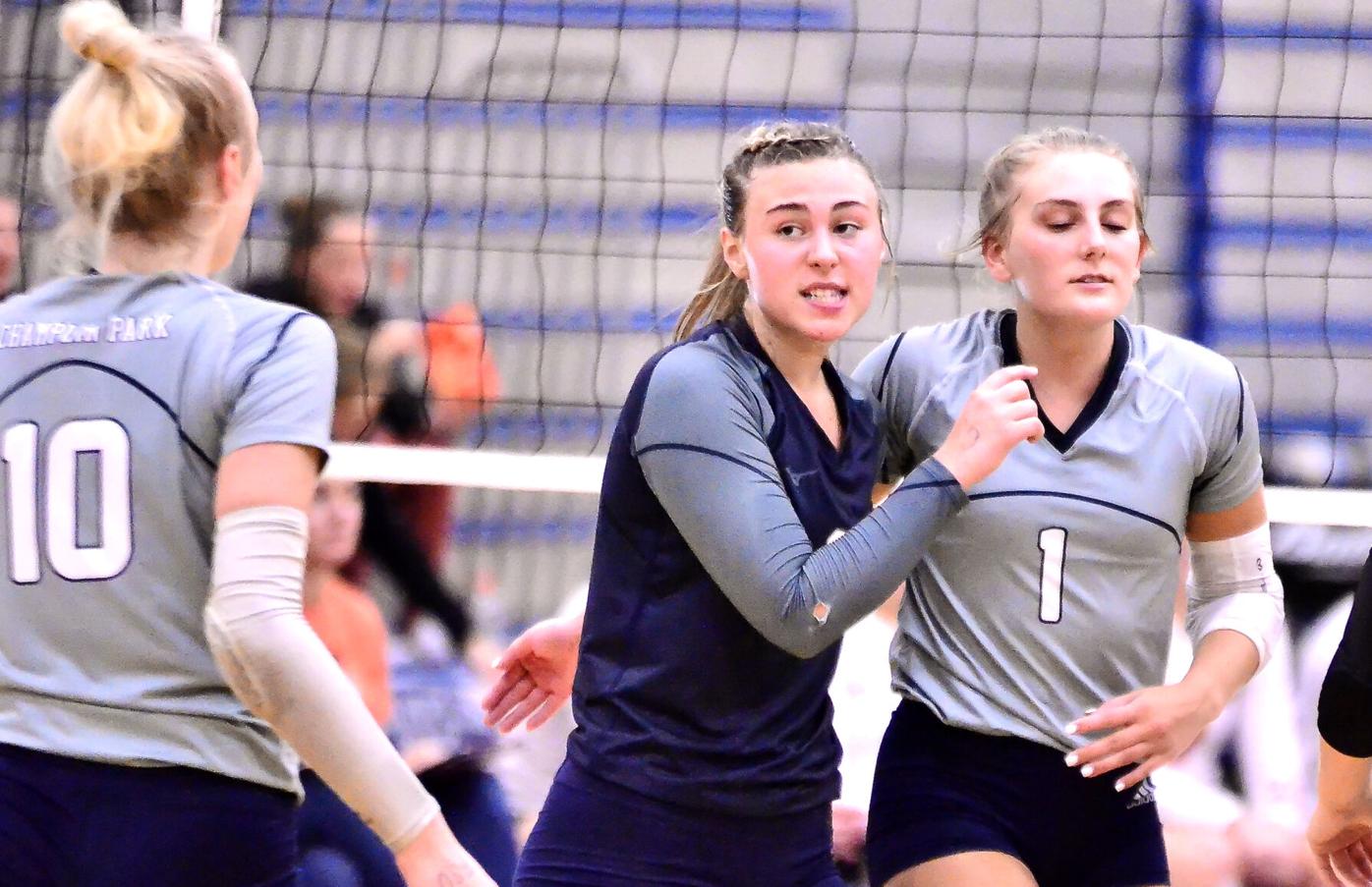 Champlin Park senior libero Kylie Stremmel celebrates a point with senior left-outside hitter Jordan Kirpach (1) and other teammates Sept. 2 in a match against Moorhead at Champlin Park High School. The Rebels swept Moorhead 3-0 (25-15, 25-16, 25-14) to win the third straight match to start the season. 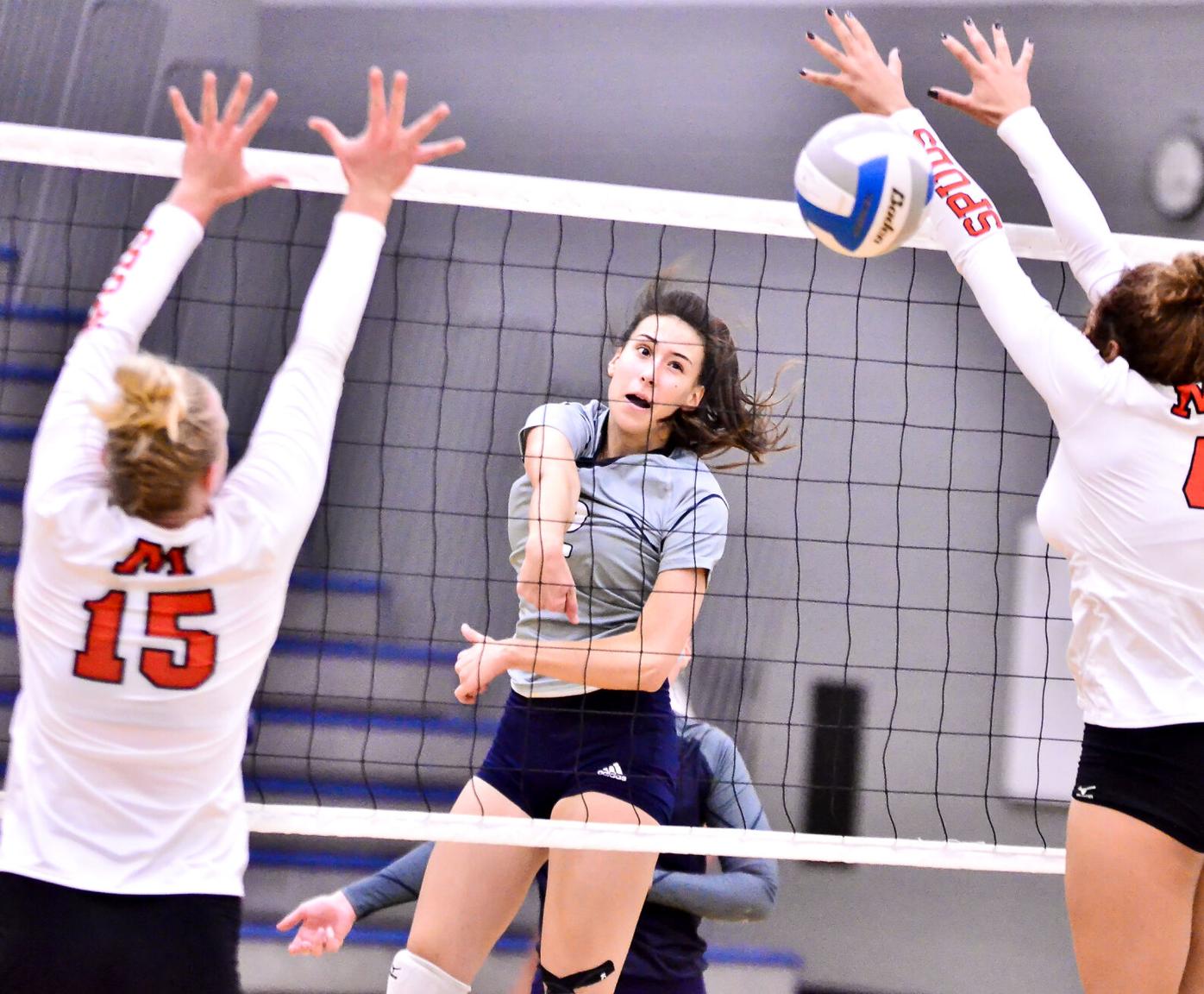 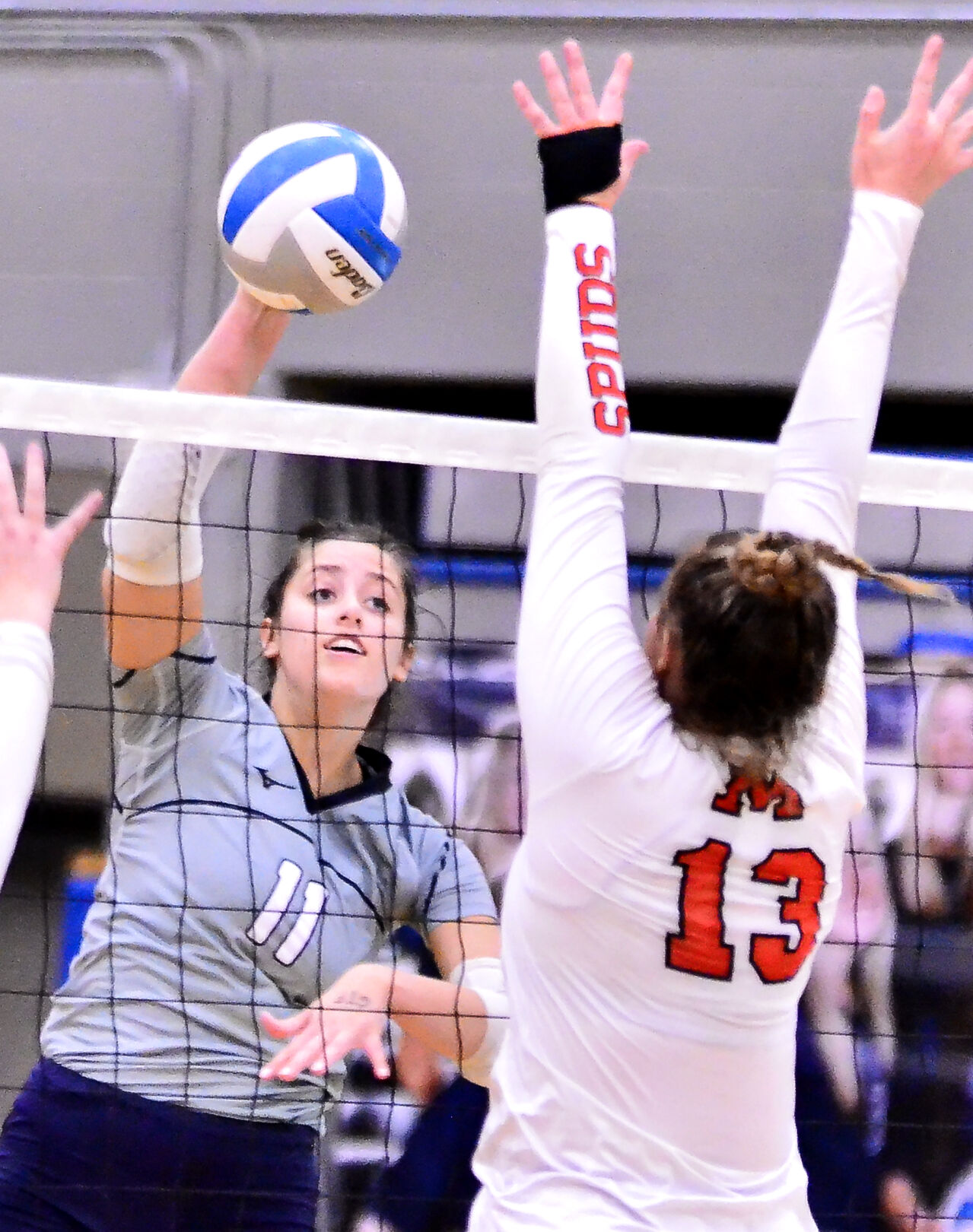 Champlin Park senior right-outside hitter Ellie Schmidt goes for a kill in the first set Sept. 2 in a match against Moorhead at Champlin Park High School.

Champlin Park senior libero Kylie Stremmel celebrates a point with senior left-outside hitter Jordan Kirpach (1) and other teammates Sept. 2 in a match against Moorhead at Champlin Park High School. The Rebels swept Moorhead 3-0 (25-15, 25-16, 25-14) to win the third straight match to start the season.

Champlin Park senior right-outside hitter Ellie Schmidt goes for a kill in the first set Sept. 2 in a match against Moorhead at Champlin Park High School.

There might not have been a top-10 ranking for the Champlin Park volleyball team coming into the season, but they most likely will be on that list soon.

The Rebels (3-0 overall) opened up against third-ranked East Ridge and fourth-ranked Lakeville North and Moorhead, which is a program that has made state in five straight seasons – not counting 2020 since there wasn’t a state tournament last year.

Three wins later, and a team that had a several new faces on the varsity squad looks like they belong in the conversation as a potential state challenger in 2021.

“Honestly, it just feels good,” senior Kylie Stremmel said. “We take pride in what we are doing. We’re all pushing each other and, we’re ready for more. And we just keep coming back every day and are working harder and harder and focusing on what we need to work on.”

The Moorhead win also shows how the Rebels were able to avoid a letdown following two wins over pre-season top-10 teams.

Coach John Yunker said the key was to not take a team like Moorhead for granted. The program is a perennial state qualifier, and Champlin Park was also not ranked in the pre-season top-10 and look how good that prediction is working out so far.

“They worked really hard the whole preseason as we kind of beat them up for three weeks with practices and the scrimmages that we had and these tough matches,” Yunker said. “So I’m proud of them for the way they worked.”

Last season was quite different of course with the COVID-19 pandemic. The season was moved to the spring, moved back to the fall and shortened before ending even sooner than expected.

The schedule was also limited to Northwest Suburban Conference teams and protocols made it tough on the athletes.

“Last year were weren’t sure if we were going to get into the gym at all,” Kapitzke said. “Just to be back in here, I think everyone is taking advantage of that and showing up to practice 100 %.”

“Honestly, being back in the gym, being with everyone – it feels really free right now,” Stremmel said. “We have been in the gym every single day for the past three, four weeks and working on our details and pushing ourselves to be better.”

And the tough schedule is important to see what the team needs to do better.

Great teams expose an opponent’s weaknesses, and Yunker said that now the Rebels can go back and work on things in practice with the team recognizing what they saw in the game.

But as for this start to the season, there is a little bit of a surprise for the coaching staff.

They knew the team would eventually jell and have results on the court with how athletic they are and because the roster plays at a high level during the club volleyball season.

But with the oddity of 2020 and some new faces, it was hard to see what the team was actually going to look like early this season.

“We just thought it might take a little longer for everyone to get acclimated,” Yunker said. “And they seem to be handling it really well, and we are excited about it.”

The camaraderie definitely looks to be there with everyone getting on the court in the Moorhead game.

If someone made a mistake or was unsure about someone, teammates helped out and communicated with them. And it led to positive trends on the court.

“We’re all really good friends, so I think when you are best friends, you work harder and play better together,” senior Allison Kopp said. “You push each other harder and all get a long and it helps out.”

One of the newer faces is freshman right-outside hitter Carly Gilk, and Gilk has already made a large impact.

Gilk had two kills and an ace to lead the Rebels to a win in the second set, and Gilk also made a difficult dig that led to a point in the final set of that victory.

Freshman setter/left-side hitter Reese Axness had 13 assists and 11 digs in the win over Lakeville North, and junior defensive specialist/libero Sara Moberg collected 21 digs in that win.

Junior left-outside hitter Marlie Hanson had eight kills and two digs against North and also had the game-winning kill in the win over East Ridge.

Caswell and Schmidt also had back-to-back kills to lead the Rebels to a fourth-set win against East Ridge.

Kopp had 16 assists, five digs and an ace against North, and Stremmel had 10 digs. Senior left-outside hitter Jordan Kirpach finished with five kills and two digs in that win.

Senior left-outside hitter McKenna Thorup, sophomore defensive specialist/libero Kaitlyn Erickson and freshman right-side hitter/middle blocker Kathryn Adler all played against Moorhead, as well. And all of them made plays to help in the third set.

Yunker said getting everyone involved is going to be important.

One, it means that anyone can step up for an injury or sickness and play well.

Two, it rewards the team for working hard in practice – which Yunker said he has experience with from his playing days.

“I know what it’s like to go practice every day and work hard and maybe not get in as much,” Yunker said. “But they just show up every day, put their heads down and go to work and with a smile on their face. We appreciate that so we want to reward them for that too.”