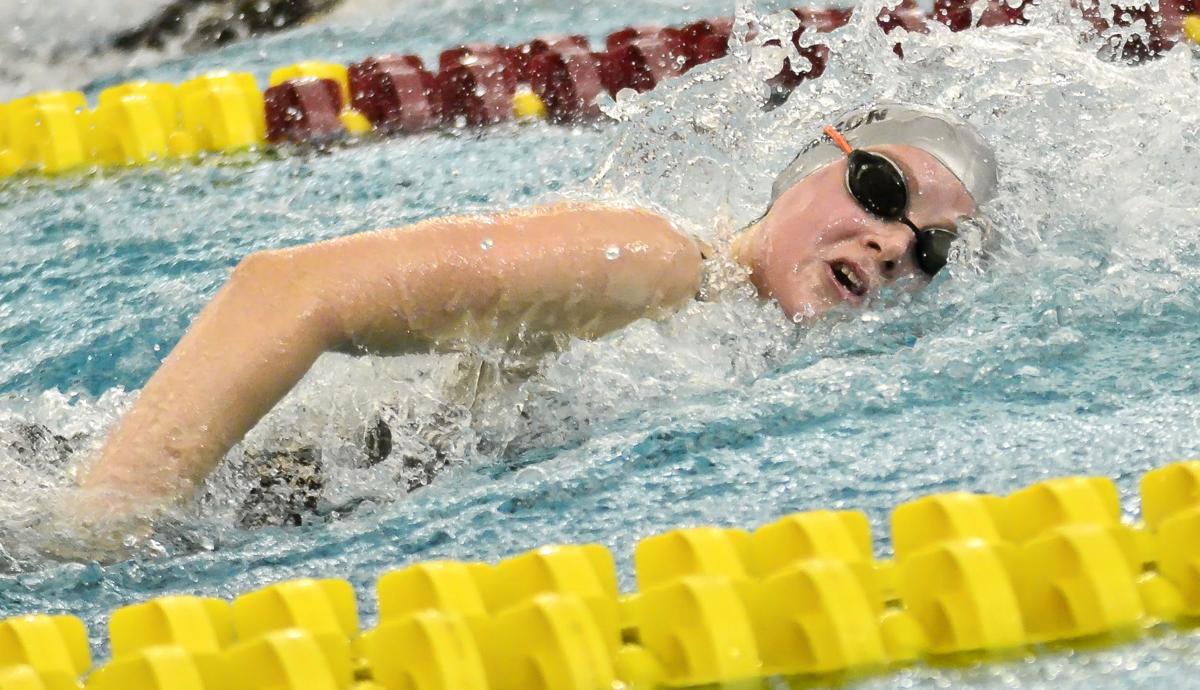 Champlin Park senior Heather Johnson swims in the Class 2A state tournament in November. It was her fourth career appearance at state. Johnson recently won the 2020 Minneapolis Athena Award for Champlin Park. 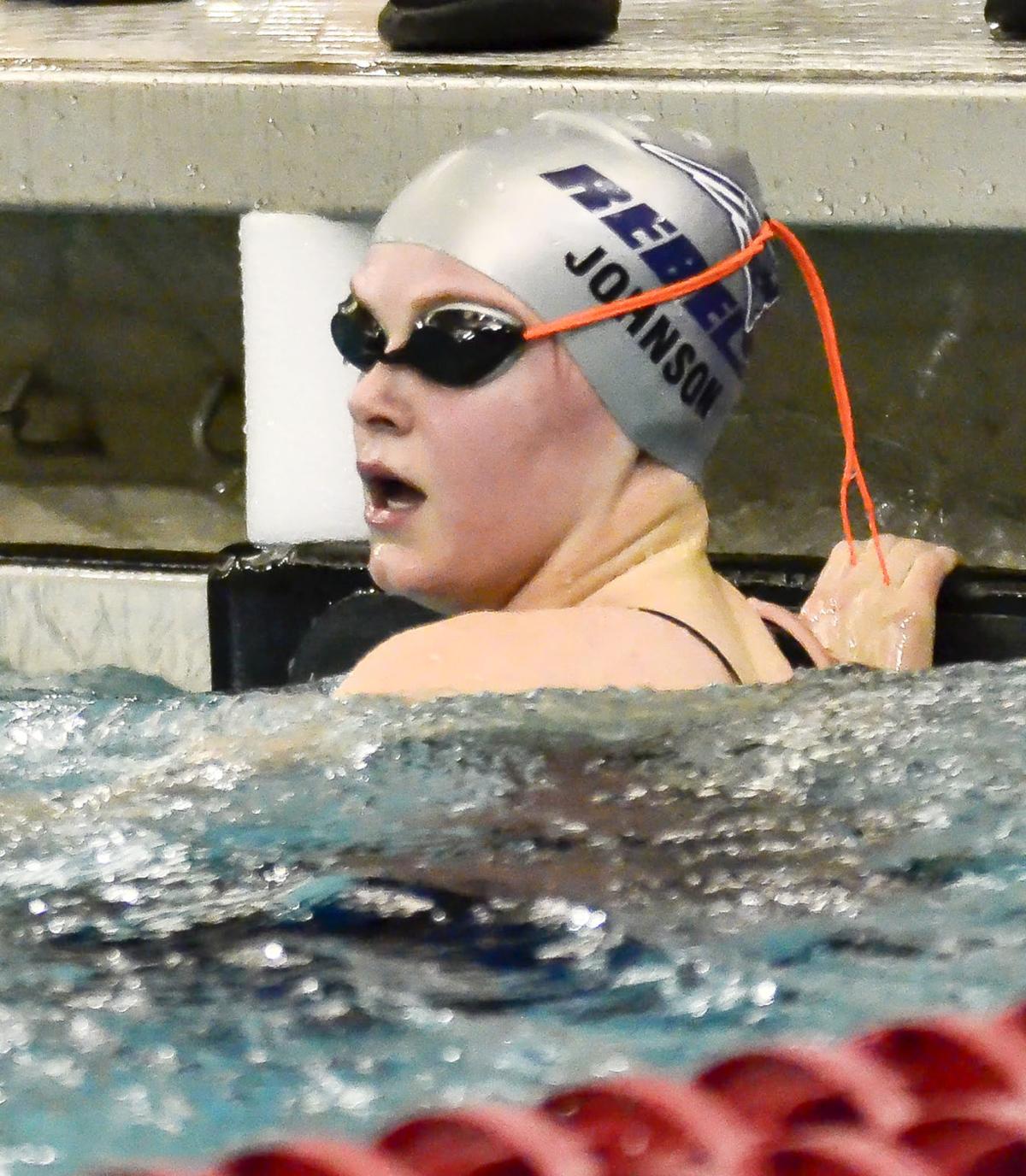 Champlin Park senior Heather Johnson looks at the scoreboard to see her time in the Class 2A state tournament in November.

Champlin Park senior Heather Johnson swims in the Class 2A state tournament in November. It was her fourth career appearance at state. Johnson recently won the 2020 Minneapolis Athena Award for Champlin Park.

Champlin Park senior Heather Johnson looks at the scoreboard to see her time in the Class 2A state tournament in November.

Champlin Park senior Heather Johnson is the second Rebels’ swimmer to claim the Minneapolis Athena Award in the past three years.

Johnson, who is the 28th Champlin Park female athlete to receive the award, swam with the 2018 recipient Elizabeth Zeller and looked up to her when she was younger. Zeller swims at NCAA Division I Rutgers University (New Brunswick, New Jersey) now, but she also set several school records and was a staple at the state tournament.

“Lizze won three MVP awards for the swim team while I was there, and so getting to be listed with the best swimmer of the team for several years in a row, that was just really cool,” Johnson said.

Johnson said she knew coach Joe Thiel was going to try and get her up the list of nominees for the Athena Award based on her swimming career, making the Class 2A state tournament four times and claiming several individual medals at sections and state.

Making state four times was not something Johnson even expected to do, so winning the Athena Award was a bit of a surprise as well, she said.

“I know there are so many amazing female athletes at Champlin Park that I wasn’t really exactly sure if I would get it or if I would just be that close,” Johnson said.

“It was really fun to just be listed among people that I knew and I know that are amazing people,” Johnson said.

Johnson also had community involvement and academic success to go along with swimming that helped her stand out, but she said she was hoping athletics played a bigger role in why she won the award.

She started swimming competitively in first grade and that helped her make the Rebels’ varsity squad as a seventh grader. Johnson also earned one letter in track and field during her high school career, but swimming was her one true sport.

As a swimmer, Johnson collected six conference awards, 24 section awards and four state awards. She was a four-time state participant and won the 50-yard freestyle 5AA section title in 2017.

“There were a lot of different things that helped me get to being that level and being so high up and winning the section title and all-conference all of my years on the high school team,” Johnson said.

Even with all of the awards and state memories, Johnson said one of her favorites is being able to sign the bungee cord that attaches to where the lane lines connect in the school pool. The cord moves the lane lines away to help with sprinting exercises and to help a swimmer feel the water and get their tempo up higher.

Johnson said that she used the bungee cord a lot in her last few seasons to get ready for sections and state, so it was something that meant a lot to her. She asked coach Thiel if she could sign the cord, and she was given the OK.

She also had several academic honors – earning Academic All-State, earning three academic letters and being named an AP Scholar. She is also going to graduate with the highest honor at Champlin Park, which means she has a 3.90 or higher weighted GPA and has taken at least 10 honors courses.

Johnson had a lot of volunteer, community and extracurricular activities that helped her stand out, as well. She is a Church Youth Group Leader, a part of the Champlin Park Symphonic Band playing trumpet and the Knitting Club President.

She also volunteers at Riverdale Church in Andover which she has been attending since seventh grade, and she volunteers to help with lower level swimming.

Johnson said that her extracurricular activities and community involvement helped her become a more all-around person. She said her teachers and those in the band and knitting club also put a lot of time and effort into helping her succeed.

“If I just did swimming or I just did school, I am pretty sure I would be a lot more boring than I am,” Johnson said. “The opportunities that I’ve had like going to the (University of Minnesota) just wouldn’t be there. … If I didn’t choose to step out and go do all of those things with my extracurriculars, with volunteering, that I would have not been that person to just like keep going and keep trying to grasp what is still going ahead of me.”

Johnson is headed to the University of Minnesota to major in chemical engineering next fall. She is familiar with the campus after swimming there at club and high school events, and Johnson also knows others who attended the campus.

Johnson also knew she wanted to have a career in chemistry since she was a sophomore after taking an honors chemistry class, and she found in research that the University of Minnesota is one of the better schools for a chemistry engineering degree.

Johnson also plans on minoring in psychology, and that is another field she said that is an academic strongpoint at Minnesota.

Johnson said she is still deciding whether she wants to do intramural or club in college but sees swimming as being a big part of her life despite not really focusing on the competitive aspect of it anymore.

“I am at least going to be in the pool quite often because I still love swimming,” Johnson said.

Johnson said she was disappointed that it wasn’t going to happen, but she also understands the importance of canceling the event.

“I was just thinking about how meeting all of these fantastic women around the Metro area would be super, super cool,” Johnson said. “I was sad for quite a bit of time when I found out, but then I was just like, ‘OK, this is something that needed to be canceled because it’s a big gathering.’ And big gatherings are definitely not appropriate at this time.”

Johnson is one of many students that have been affected by the pandemic. Besides the award banquet and all spring activities, schools have also been closed which has forced distance learning.

“My classwork has definitely lessened a lot just because we don’t have the amount of resources that we used to have,” Johnson said. “I do miss not being able to hang out with all of my friends all of the time, but I have been able to focus on myself and my own well being quite a bit more since I didn’t have as much going on.”